How a young mother addicted to ice kicked the habit

A young mother who turned to ice after being raped as a 13-year-old girl was sucked into a devastating cycle of drug abuse which almost took her life.

Rach Axis, now 28, was sexually abused during the first year of high school which marked the first of many horrific events to come.

The rape led to her decline which included bullying, physical abuse, meth addiction and three attempts at suicide. 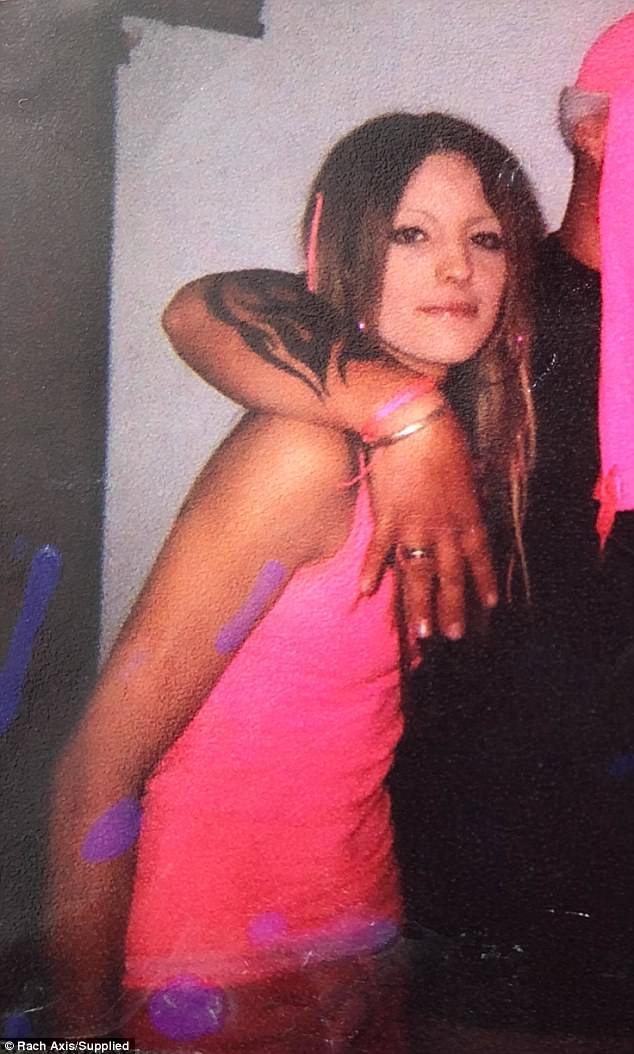 Sneaking out of her rural home in South Canterbury, the opportunistic teenager decided to ditch her warm bed at 1am and head out to drink with some friends.

Fifteen years later Rach is unable to shake the memories from the night that she was raped.

She claims police officers didn’t believe her story and told her she ‘shouldn’t have left her home and drank alcohol in the first place’.

Their alleged lack of empathy and understanding triggered Rach’s distaste for authority which soon led to her rebelling, shying away from the advice of her parents and the instructions of teachers.

‘I was bullied and beaten up at school more than once before and after the rape incident, I just never managed to fit in. As a result I went to nine different schools,’ she told Daily Mail Australia.

‘Eventually; I started hanging around with people older than me, and started experimenting with alcohol, BZP, marijuana, LSD and anything I could get my hands on.

‘I felt untouchable, I felt tough, I felt confident and I felt like I finally fit in and no one was going to hurt me again.’

Rach finally felt like she had found a group who she could fit in with, as they all had come together following variations of negative experiences.

Her new found friends however didn’t deter bullies who one day beat Rach ‘to a pulp’ at high school. 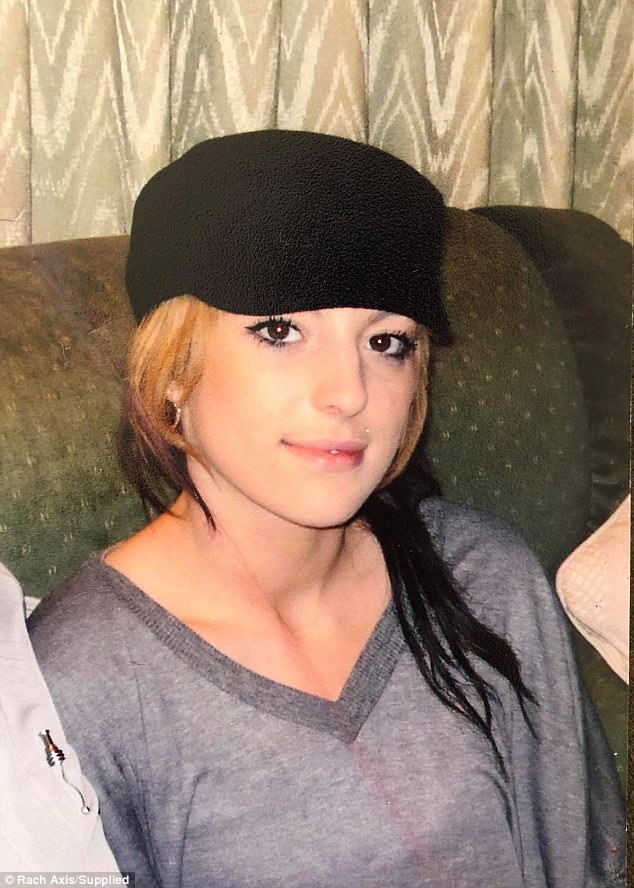 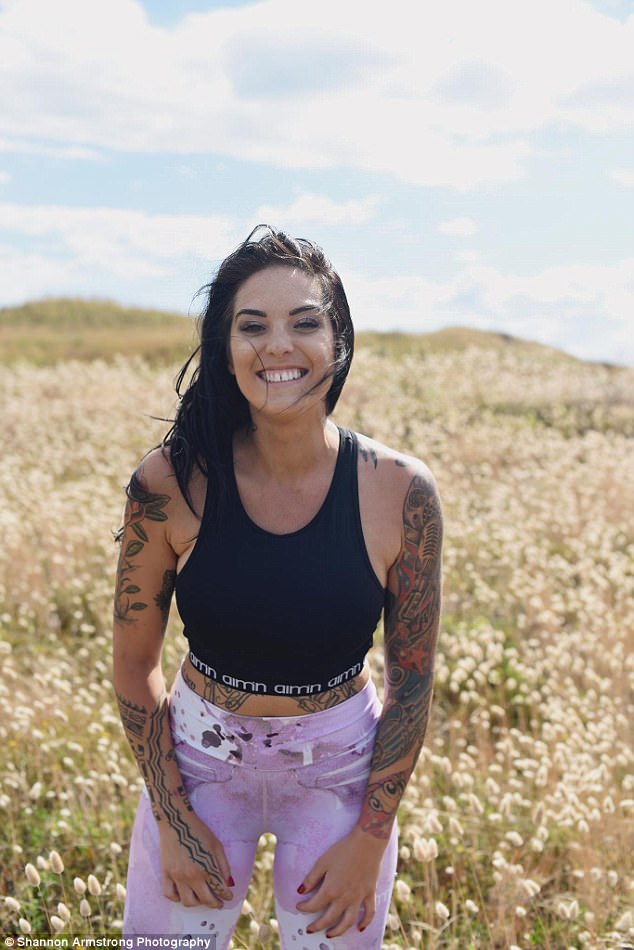 Now 28, Rach is a happy and strong young mother to her six-year-old daughter and co-parents her partner’s son who is nine

This prompted her mother to take Rach to move to Christchurch, in the South Island, where she attended an all girls school.

‘Eventually I was suspended for assaulting another student because they had found out about my past and spread rumours around the school.

‘I ended up dropping out of school, and started to go cruising in cars in the weekends, drinking and being a rebel.

‘Meanwhile, my poor mother had no idea as I would lie to her about my whereabouts – little did she know her daughter was heading into a deep spiral of addiction and behaviour which led to heavier drugs, arrests and criminal convictions. 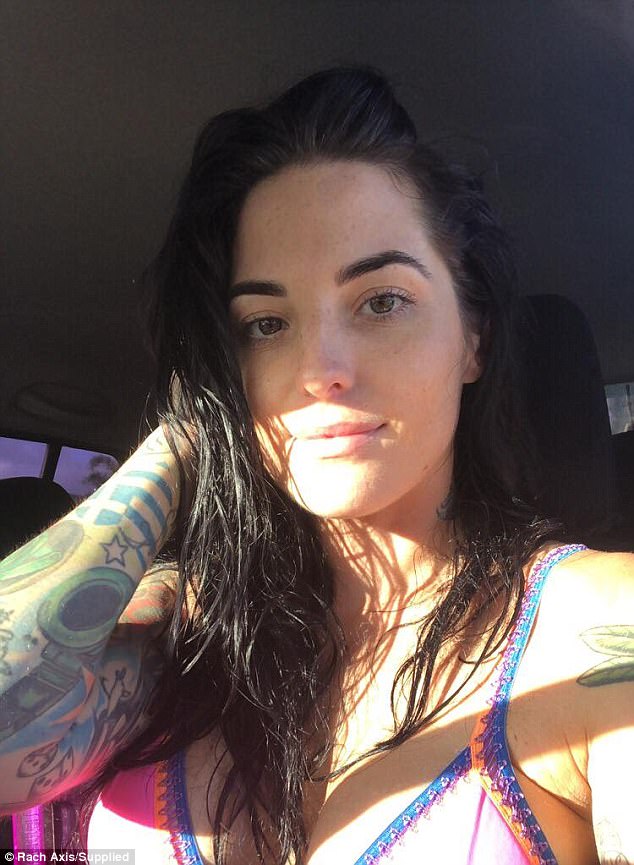 ‘One evening, I met a group of males – and one of them ended up becoming my boyfriend on and off for a couple of years. He was in and out of jail, on home detention and he was mentally abusive.

‘They were into methamphetamine and this is where I first tried this drug. It made me feel alive, happy, intelligent, funny, I lost weight which meant I could stop starving myself or purging and most of all I made a lot of money initially when I started selling it.

‘It began as a weekend treat, and within two years I was injecting, I was kidnapped, raped, beaten, arrested, homeless, lost friends and family but even worse, I lost myself.

‘This was not enough to stop me from using, I was too deep in the hole. I was too afraid to leave that scene, because anyone that did was accused of being a ”nark” and usually would be beaten or sometimes even killed. So I was stuck.

‘When I eventually sought help, or wanted to – there was no where to go, the wait lists for rehabs were ridiculous and I was only 18, so no one took me seriously that I really wanted the help. I was looked at like I was a waste of time, I was too young and I would probably just go out and use again anyway.’ 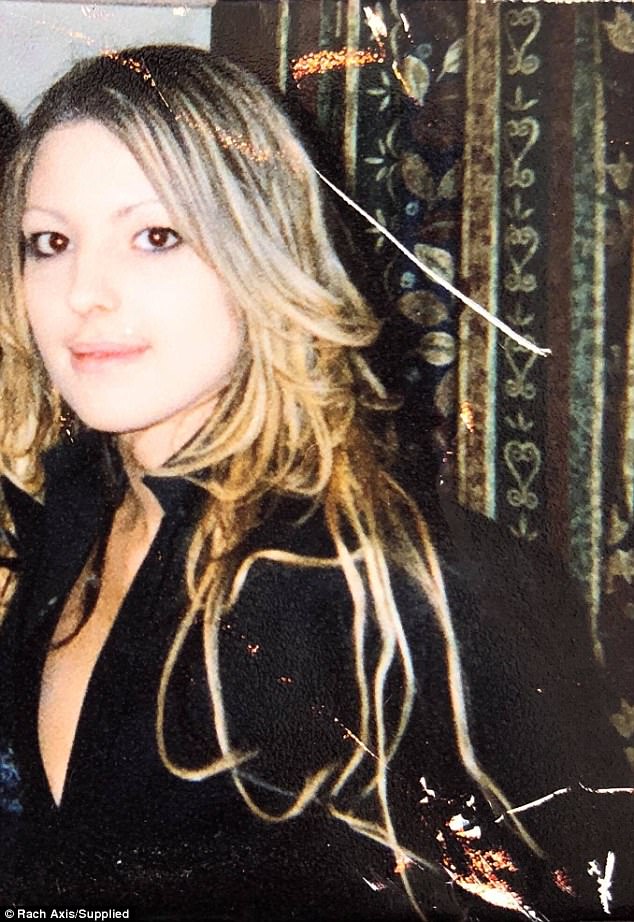 In 2008, Rach’s mother flew her to Greece to get away from the group she was associated with to live with family.

This put financial pressure on her mum however she was willing to do anything to save her daughter and get her beloved child back.

After just a few months she was taken back to her home in New Zealand before she was really ready or had fully recovered.

‘I ended up back on the street, with anger and sadness that I had been let down yet again.’

It took another year after her return from Greece for Rach to seek help – the first step on a difficult road for her and her family.

‘My parents had to have self-defence weapons at the door to fend off anyone who was looking for me if they showed up.

‘We had a man in the driveway with a machete at one point. 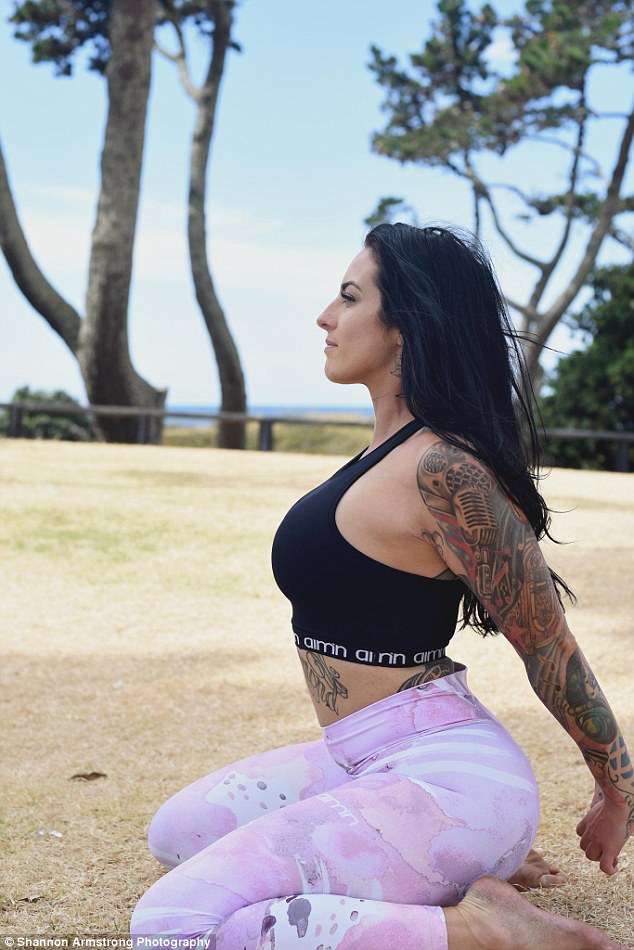 After the rape she started her decline which included bullying, physical abuse, meth addiction and three attempts at suicide

‘While I was in detox, and in early stages of recovery I really started to notice the impact my addiction had on my family, especially my mum.

‘She was a mess, she hadn’t had a full nights sleep for about four years, from being so worried that she would get a call that I was dead.

‘I hid a lot from my mum, because I didn’t want her knowing the truth, so getting clean was scary as it meant I had to be honest and break my mum’s heart all over again by telling her what I had been through.

‘During my addiction I had attempted suicide more than three times, including a hanging where my boyfriend found me, as I felt this was the only way I could end the trouble I was causing my family, friends and myself. 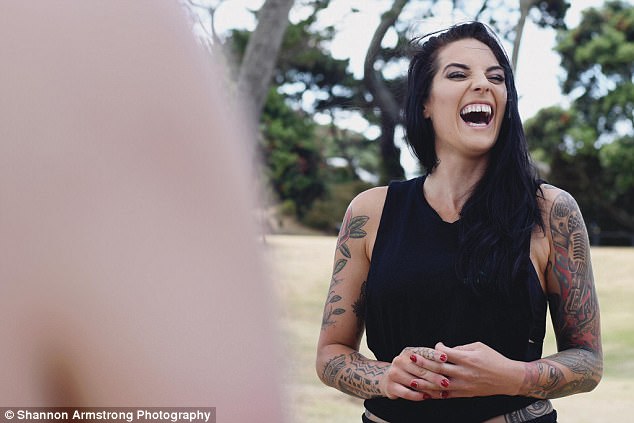 ‘At the age of 19 I finally made it into rehab, it was three months residential and that is where I found the inspiration to become a social worker myself, because these counsellors did not have to be here, they chose their career.

‘They made me feel worthy of a life without addiction. I still have contact with many of them today, and I was given a job at a youth residential rehab in 2013 by one of my rehab counsellors.’

Rach’s strength to break free from substance abuse was initiated by the look she saw on her mother’s face on night when they met up to go to a concert together.

‘When I actually had to use in the bathroom to stay awake at this concert, while my mum was outside – that was a wake up that I needed to sort my s***. 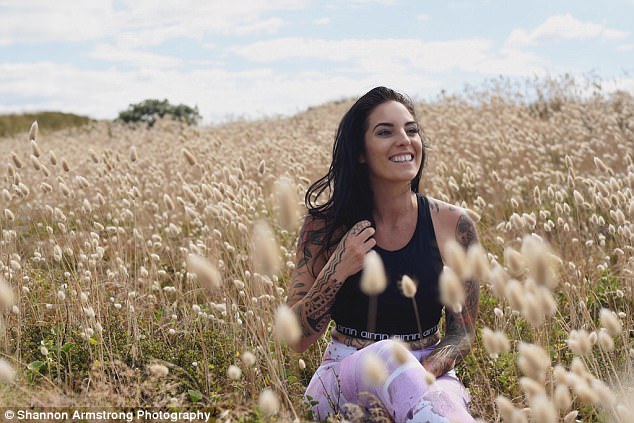 In 2008, Rach’s mother flew her to Greece to get away from the group she was associated with to live with family

‘My mum and I are very close and I will forever feel sadness for the trouble I caused her, especially now I am a mother myself – I am terrified of what could happen to my daughter.’

Rach believes trauma is often the underlying cause of using substances and is calling for more support for mental heath and education around healthy relationships as well as how to practice self care.

She is now a loving mother and partner and is studying a bachelor of Social Work as well as Advanced Personal Training, hoping to help others to overcome their addictions.

‘At times it feels like there is no hope, but if someone really wants help, listen.

‘Do not give up, it is not an easy road – if it was, anyone would do it and no one would be addicted to anything. Why are you using? Why are they using? What is going on for them?

‘The stigma of addiction, especially the use of methamphetamine needs to shift, why is it okay for people to drink excessive amounts of alcohol but when any other drug is discussed people are so quick to judge. This makes it hard for people to ask for help, as they feel embarrassed.

‘We need to focus more on rehabilitation, support, and education rather than punishment and I believe that will save many more lives, as well as save the country money.

‘I always hear the argument “why should tax payers pay for druggies to get help, they should just over dose or just stop using drugs” – but actually, it costs more to incarcerate crime committed by those in addiction than to have residential rehabs available. 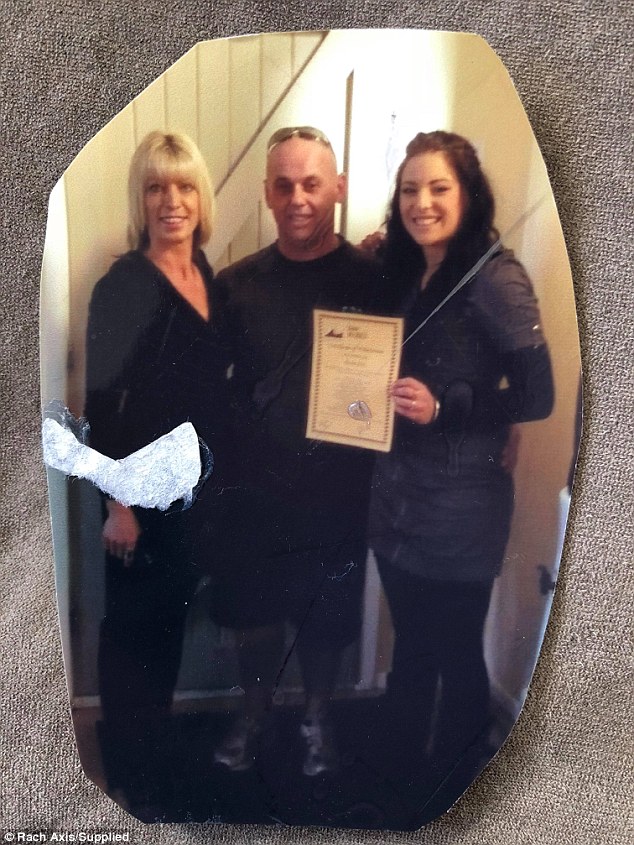 ‘Addiction is awful, no one in that world wants to be there, so try to understand and support the need for more services and we will start seeing a shift in the statistics of addiction decrease.’ 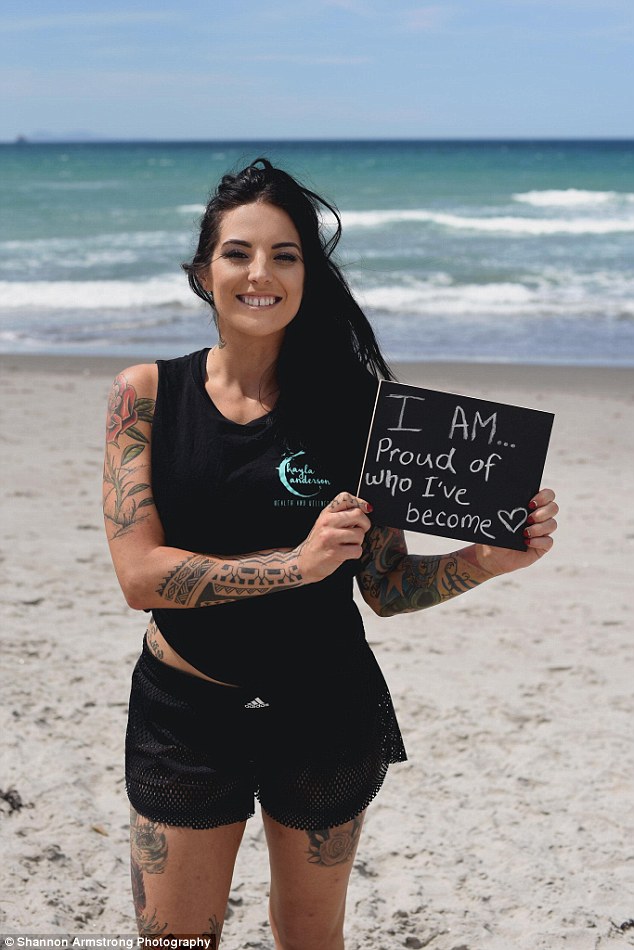 She is now a loving mother, partner, daughter, granddaughter, friend and is studying a bachelor of Social Work as well as Advanced Personal Training to help others who struggle