‘How about getting crack off the streets first?’ Residents slam ‘unenforceable’ public smoking ban

Australia’s first public smoking ban has been slammed online as ‘ridiculous’, ‘unfair’ and ‘unenforceable’ by smokers and non-smokers alike.

Mayor Jilly Gibson made the recommendation to North Sydney Council who unanimously voted for the ban earlier this week.

The ban would stop smokers from lighting up in the street, making North Sydney the first council in the country to create a smoke-free district.

Speaking to the Today Show, the Mayor said that it was ‘unreasonable’ for people to smoke on Sydney’s streets.

When asked where people that usually smoke outside their office buildings are now supposed to go, the Mayor said: ‘That’s not really Council’s problem.’

Cr Gibson said that she was hoping for a 75 per cent compliance rate with the ban, adding that it would also benefit the environment. 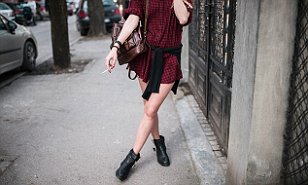 Do you think smoking should be banned on public streets?

‘It would be great not to have so many cigarette butts ending up in our harbour,’ she said.

Many have taken to social media to vent their frustration at the proposal, believing that the Mayor has more pressing things to worry about.

Sydney’s drug scene was mentioned by several, including one who said the Council should be more concerned about the ‘ICE epidemic and the crime caused by it’.

‘How about working on getting crack off the streets first!’ one exclaimed.

‘I’d rather see a smoker walk down the street than a drunken loud mouth or a meth head waiting to rob you,’ added another.

And it’s not just smokers who are concerned by the ban, with many non-smokers also rejecting the proposal.

‘I don’t smoke but I know plenty of people that do and this isn’t fair, let them smoke, they’re not doing any harm,’ one person said.

Sydney’s drug scene was mentioned by several, including one who said: ‘How about working on getting the crack off the streets first!’

‘I’m an ex-smoker and it took me 5 years and a lot of support from my doctor for me to be able to quit,’ one person wrote on Facebook.

‘When are people going to realise it’s hard to quit and it’s addictive, taking away the places they can smoke in isn’t going to make them stop it’s just going to upset them and make them feel more attacked.’

Others have said the ban has reached a new level of ‘ridiculous’, and questioned whether food and drink bans will be next.

Plenty of ex-smokers also gave their opinion, saying that the ban won’t help people to quit

‘…so what’s next? You can no longer eat food whilst walking to and from work? MADNESS!’ they said.

Mayor Gibson has said that the ban would work by ‘goodwill’.

‘We’re not going to hand out fines,’ she said.

But one person commented that this meant the ruling is therefore ‘unenforceable and they know it’.

‘Council rangers do not have the right to detain anyone, so one can just walk away from them without giving any particulars,’ they wrote.

The ban would include all streets, plazas, parks, and outdoor restaurant and café seating.

‘No one should be forced to inhale passive smoke, but also for schoolchildren, they should not have to see people standing around smoking,’ the Mayor said. 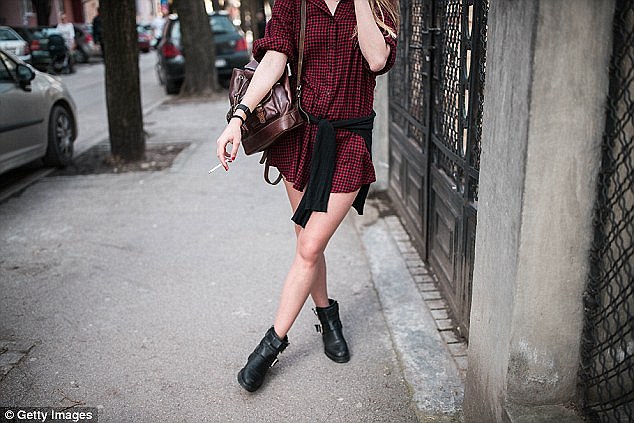 The ban would include all streets, plazas, parks, and outdoor restaurant and café seating (stock image)

Regarding electronic cigarettes, the Mayor said she thinks they would fall into the same category although ‘we haven’t really thought about it yet.’

Cr Gibson said that the North Sydney CBD could become smoke free by early next year if community consultations are completed on schedule by Christmas.

Dominique Bergel-Grant, president of the North Sydney Chamber of Commerce, said the organisation welcomed the move to ban smoking in an area that sees an influx of 46,000 workers during the week.

The Federal Government increased the price of cigarettes in this year’s budget, with each pack now costing almost $40.

The 12.5 per cent tobacco excise hike signals the government has no intention of going easy on smokers’ wallets in a country that is already the most expensive place  to buy cigarettes in the world. 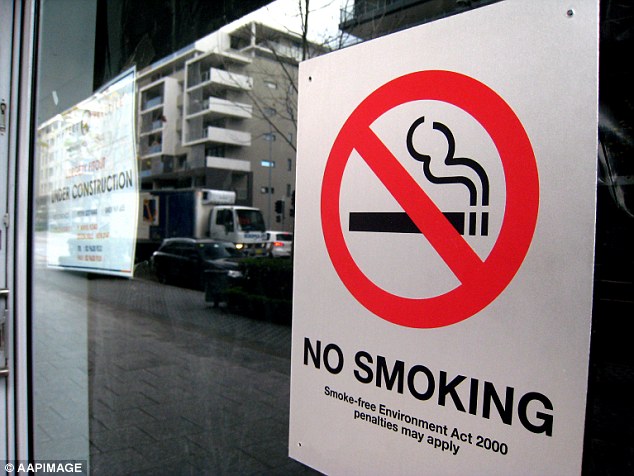