As a British soldier in the Cold War, Andrew Coombs was posted to Berlin when it was still cleaved in half by a wall of concrete and barbed wire.

More than three decades later, things are thankfully different – and the boss of Sirius Real Estate has a great view.

From his office overlooking the Reichstag, Coombs runs what has quietly become an impressive British success story abroad.

The FTSE 250 firm owns a sprawling empire of business and industrial parks across Germany and pulled in profits of £141million last year – up from £124million in 2019.

In a trading update yesterday, Coombs reported a near-12 per cent rise in a key rental figure to £85million and said ‘confidence is returning’ thanks to the vaccine rollout.

It’s a far cry from the situation Coombs, 56, inherited in 2010, when he was brought in to stabilise Sirius in the wake of the financial crisis with shares hovering around 20p.

At its low point, the firm had crashed to a £44million annual loss as the real estate bubble popped and property values plummeted.

With creditors banging on the door, Coombs was forced to fight a rear-guard action just to stay afloat.

‘The first two years were just about survival,’ he says. ‘When I arrived, we only had enough cash to last us three weeks.’

The company’s bank was circling, anxious to recover a £100million loan – even if it meant closing the company down – while investors did not want to provide further funds. 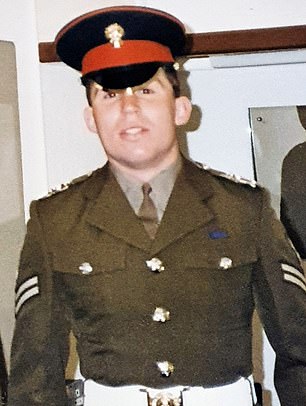 Soldier: Coombs in his army days. He was posted to Berlin briefly in 1982 aged just 17

‘I can remember dreadful days where I personally fired 29 people,’ Coombs says. So how did the company survive?

‘We halted spending, let staff go and managed to arrange the pre-payment of rent by some clients to keep us liquid.’

He remembers eating in a London restaurant with a client when two senior bankers ambushed them and told him ‘you’re finished’.

‘It was absolutely horrendous. But my answer was, ‘We’re turning the business round. I’m paying back these loans. If you use these tactics, the business will go bust and you’ll get nothing.’

‘And we paid back every single cent – one of the reasons we can get money at low interest rates today. People know we will pay it back.’

By 2012, Sirius had been restructured to bring the management of its properties in-house, making further savings.

But with the company still valued at a 70 per cent discount to its properties, Coombs decided he needed, finally, to raise cash.

So he opted for a dual-listing on the Johannesburg stock exchange, largely because – by his own admission – ‘South Africa was the only place we could raise money’.

The firm raised €40million and used the money to invest in new properties, kick-starting a revival that culminated in a debut on the FTSE 250 three years ago.

It is a vindication for Coombs, who took an unusual path to the boardroom via the military and consultancy work.

After leaving school and joining the Territorial Army, he was posted to Berlin briefly in 1982 aged just 17.

‘It was like the West was in colour but when you crossed the border, the cars, the clothes and everything else were black and white,’ he says.

‘That was hard to grasp. At that age it was an adventure – drinking German beer, meeting German girls, it was a great experience. You only realise the significance of it later.’

A year later he had joined the Grenadier Guards, part of the regular Army, and went on to serve in Central America and Northern Ireland and became a qualified sniper. Coombs went back to the TA in 1987 and left as a platoon sergeant in 1992.

He initially struggled outside the forces – ‘I didn’t have the social skills’ – but with help from a mentor he got a sales and marketing job at the Yellow Pages and rose through the ranks.

He left as a manager and went on to work on-and-off as a consultant for companies who needed to undergo transformations, including British Airways.

This was followed by a stint at Regus before joining Sirius.