How are Prince Harry and Meghan Markle filling their days in a 12-bathroom Hollywood mansion?

Why is it that a couple so keen on wanting a new life seem so obsessed with the past? For that is the very strong impression that Harry and Meghan are giving the world. Just six months ago, the couple announced they yearned for a new beginning.

Ripping up the royal rule-book, they stood down as members of the Royal Family, dropped their HRH titles, moved thousands of miles away and embarked on their own way of doing things. A new start. Finally, as they saw it: freedom.

But instead of looking to the future, they seem consumed with what they left behind.

Prince Harry and Meghan Markle have been living in an ultra-luxury Beverly Hills mansion (above) that belongs to Tyler Perry. The eight-bedroom, 12-bathroom Tuscan-style villa sits on the top of a hill in the exclusive Beverly Ridge Estates gated community

Trapped in their vast Los Angeles mansion by coronavirus, their new lives on pause, the couple issue regular reminders to the British people of their charitable concerns, such as saying how ‘humbled’ they are by the work of an organisation that has been delivering food to people during the lockdown. Or Harry apologising for not doing enough to combat racism, that is ‘endemic’ in society.

Last week, we saw Meghan’s explosive accusations over the way she feels she was treated by courtiers and staff who serve the family into which she married.

The former actress claims she was left ‘unprotected’ while pregnant with Archie, that her mental health suffered and she was ‘prohibited from defending herself’.

With remarkable chutzpah, too, she claims their wedding was a £1 billion money-spinner for the UK and that public money spent on her was ‘relatively nominal’.

Perhaps the £2.4 million of taxpayers’ cash blown on renovating Frogmore Cottage had slipped her mind, although they have promised to repay that – eventually.

Far from escaping what the couple saw as the conspiracy against them, and starting anew, this latest salvo, revealed in court documents, has just rubbed salt into old wounds.

For it puts on the record for the first time the very differing approaches towards public duty as perceived by the Palace and by Meghan. Most significantly, she makes clear that she will not abide by the Queen’s lifelong adage of ‘never complain, never explain’.

But if she is ‘relieved that the true extent of what she believes she has suffered’ is now in the public domain, as her slick new LA-based spokesperson says, it has come at a price: attacking the Palace aides who had tried so hard to protect her.

Certainly, courtiers have been amazed at the suggestion that staff were able to overrule the Duchess over what she wanted to do or say, when, in fact, it was clear she was in control of every aspect of her life. The sad truth is that her former Palace team, originally hand-picked by her and Harry, found it hard to deny reports of her deteriorating relationship with her staff because they were largely true. 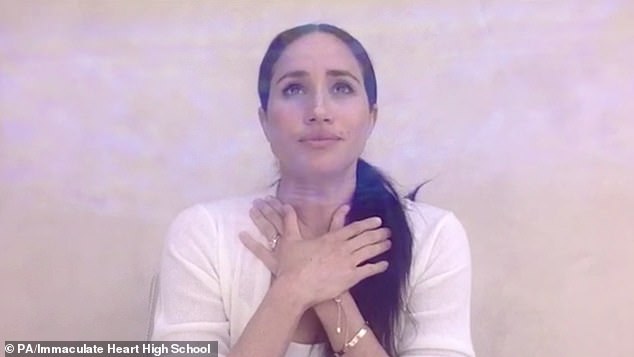 Meghan’s speech, recorded for the virtual graduation ceremony at her old LA high school Immaculate Heart, paid tribute to George Floyd amid Black Lives Matter protests in the US

‘The stories were a drop in the ocean compared to what was going on,’ said one who knows the Duchess well. ‘They [the Sussexes] come across as needy, entitled and professional victims. It is always someone else’s fault, never theirs.’

Meanwhile, as they sit in their £14.5 million, rented Beverly Hills villa with 12 bathrooms and a swimming pool, what of their lofty aims to ‘effect change’ by ‘pursuing their own charitable interests’ as their website Sussex Royal so grandly claimed?

So far, progress has stalled.

They have postponed the launch of their charity Archewell – named after son Archie – until next year. Trademark applications were rejected by the US courts last month as they were not completed properly, forcing the couple to submit them again, this time including applications for TV shows.

Originally, they had planned to launch a ‘not for profit’ organisation which would ‘advance the solutions the world needs most’, in April. The Mail on Sunday understands that this was to include a Tig Mk 2 – an updated version of 38-year-old Meghan’s lifestyle blog where she mused on travel and cooking, which ended when she married Harry.

Their focus was to be on ‘wellness’, which would include mental health, the environment and female empowerment.

Harry had also planned to advance his rather amorphous plans for sustainable tourism through Travalyst, an organisation established with partners such as Visa, Tripadvisor and Booking.com to encourage holiday-makers to travel in a more environmentally friendly way. The fact that Harry has taken at least seven international trips by polluting private jet in the past year appears to not have made it on to the slick new website.

Of course, these initiatives have been hampered by the Covid-19 pandemic.

Forced to hide themselves away in American comedian Tyler Perry’s luxurious mansion, in a gated community with staff and security, Harry and Meghan realised that this was not the ideal time to launch themselves on the world as Brand Sussex. 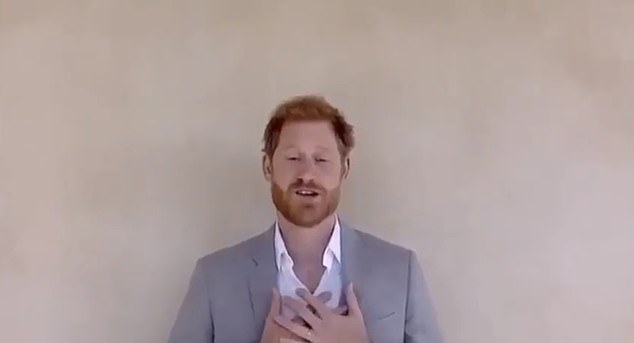 The couple have been keenly speaking out against racial injustice, as Harry apologised for not doing enough to combat racism, that is ‘endemic’ in society

Instead, the couple were photographed delivering food to vulnerable residents in their neighbourhood and they released video of themselves talking via webcam to a community kitchen project back in the UK.

But as members of the Royal Family back in Britain went into overdrive at a time of national crisis, taking to the digital airwaves, meeting charity staff, clapping for carers, thanking the NHS and jollying the population, the Sussexes were starting to look, frankly, irrelevant. Time, therefore, to up the ante. Letters sent to their UK charities such as Street Games, thanking them for work during the pandemic, contained the phrase: ‘We have been touched to witness from afar the coming together of the organisations we champion and so deeply care about.’

And the protests supporting Black Lives Matter that swept the US offered the perfect cause at the perfect time. Cue Meghan’s speech, recorded for the virtual graduation ceremony at her old LA high school, Immaculate Heart, and Harry’s recent video, recorded for the Diana Award ceremony, apologising for the ‘institutional racism still endemic in society’.

As one observer commented: ‘Harry was apologising and looking to the heavens as if he were some self-appointed world leader. Yet, in truth, he is the epitome of white privilege.’

The Sussexes’ publicists, the celebrity experts Sunshine Sachs, have ensured that their clients’ interests in racial and social injustice are well documented – telling publications that the couple have spoken to a number of Black Lives Matter leaders and community elders. The couple have also blundered controversially into the public debate about Facebook advertising, supporting an advertising boycott of the social media giant over hate speech and fake news.

A spokesman for the couple was happy to say: ‘As we’ve been developing Archewell, one of the areas the Duke and Duchess of Sussex have been keen to address is online hate speech, and we’ve been working with civil rights and racial justice groups on it.’

But a Californian source observed there is a big risk with their alignment with the Stop Hate for Profit pressure group: ‘Harry and Meghan want to make their money through public speaking. And yet it is the big businesses and tech giants of Silicon Valley who will pay the big bucks to hear them speak,’ the source said. ‘Is it really so sensible for them to berate them before they’ve even started? Have they torpedoed themselves before they’ve launched themselves on the speaker circuit? 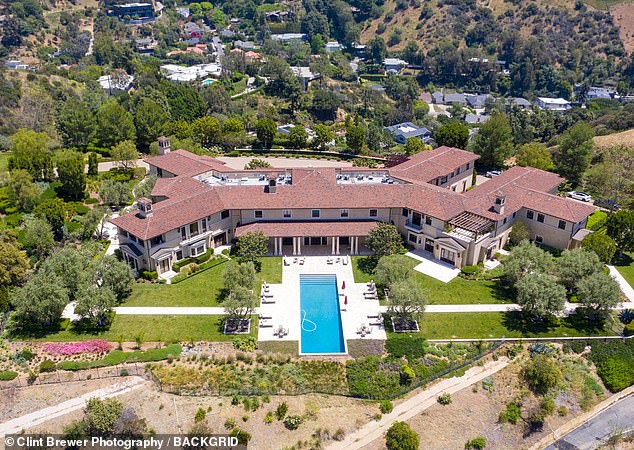 The couple’s Their house-hunting has been put on hold by the pandemic (above, the mansion they are currently living in). Reportedly the couple are looking for a large mansion, with pool and staff quarters, in one of the exclusive gated communities high in the Hollywood Hills

‘Silicon Valley does not forget attacks against it – and has Meghan forgotten that Facebook owns her beloved Instagram [with the Sussexes’ site having 11 million followers]? They seem to flip-flop to a different cause each week, as the fancy takes them.’

One thing the couple were happy to announce to the world, through the trusty channel of ‘sources close to them’, was that they had signed up to the Harry Walker speaker agency, which also has the Obamas, Bill Clinton and Serena Williams on its books.

The most high-profile clients are thought to charge up to $1 million (£800,000) a speech – a revenue stream that the Sussexes will need if they are to find a new home, befitting their celebrity status, not to mention cover their ever-burgeoning legal and security bills.

Their house-hunting has been put on hold by the pandemic. As, apparently, has Meghan’s ambition to publish a children’s book based on the adventures of her rescue dog, Guy.

Reportedly the couple are looking for a large mansion, with pool and staff quarters, in one of the exclusive gated communities high in the Hollywood Hills.

Meanwhile, they have hired a new nanny for one-year-old Archie as they settle in at their borrowed mansion and are still adhering to lockdown rules in Los Angeles.

But how, exactly, are they filling their days?

A friend said: ‘They are not going out much. They cook for themselves and also send their security out for food. They are real homebodies and enjoy doing yoga together in the garden, walking the dogs and watching TV.

‘Their new nanny enables them to work, talking to their team and progressing Archewell.’ 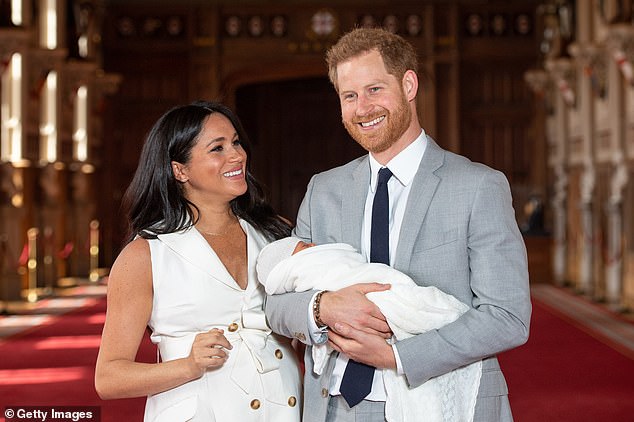 Prince Harry and Meghan Markle have said they hope to add to their family before Archie’s second birthday next May. Last year, Harry said he wanted two children ‘maximum’ due to the environmental impact

Californians were surprised to see the couple popping into a local hardware store last month – with a big security retinue – and last week they visited a cafe to help prepare food for those in need.

The couple have made no secret of the fact they hope to add to their family before Archie’s second birthday next May, with Harry saying last year he wanted two children ‘maximum’ due to the environmental impact.

But as they officially wind up their old Sussex Royal foundation (yet still keep the website, despite promising they would no longer use the SussexRoyal name), are they contented? Harry has left behind his family, many of his friends and his beloved military duties.

Another major loss for Harry are the Metropolitan Police protection officers who have been with him for years, becoming friends and in some cases mentors. None has remained with him in LA, as the couple have hired new American security provision.

Conservationist Jane Goodall has become a close friend since she met the couple last year in Windsor. In an interview with the Radio Times, she said she had spoken to Harry, and said: ‘I think he’s finding life a bit challenging right now, I don’t know how his career is going to map out.’

Despite the understandable temptation to keep looking backwards, it may help to start looking forward.