How Blockbuster LAUGHED at Netflix’s offer to sell for $50M

REVEALED: Blockbuster LAUGHED at Netflix when they offered to sell for just $50million during a meeting between execs in 2000 – and now the streaming service is worth $130 BILLION

A Netflix co-founder has described how the CEO of Blockbuster tried not to laugh when he offered to sell the fledgling startup for $50 million.

Marc Randolph, the co-founder of Netflix and the company’s first CEO, described the September 2000 meeting with Blockbuster CEO John Antioco in his new book, an excerpt of which was published in Vanity Fair on Tuesday.

Randolph described how he and Netflix executives Reed Hastings and Barry McCarthy rushed to the meeting in Dallas from their Santa Barbara headquarters in a private jet owned by Vanna White, who chartered it when she wasn’t using it.

Hastings pitched Antioco on the DVD-by-mail startup’s promise – though at the time, Netflix was on track to lose $50 million by the end of the year, three years after its 1997 founding.

Netflix co-founder Reed Hastings sits in a cart full of ready-to-be-shipped DVDs in 2002. Hasting pitched Blockbuster on buying his company for $50M but was rejected

Blockbuster, by contrast, was at the height of its power, with thousands of stores across the country, and tens of thousands of employees.

In the wake of the Dot Com crash of the late 90s, Netflix’s internet-based business seemed on much shakier footing that Blockbuster’s movie rental empire.

But when McCarthy proposed the purchase price of $50 million, Antioco’s expression cracked, according to Randolph.

‘It was tiny, involuntary, and vanished almost immediately. But as soon as I saw it, I knew what was happening: John Antioco was struggling not to laugh,’ Randolph wrote.

The Netflix executives flew back to Santa Barbara with no deal. 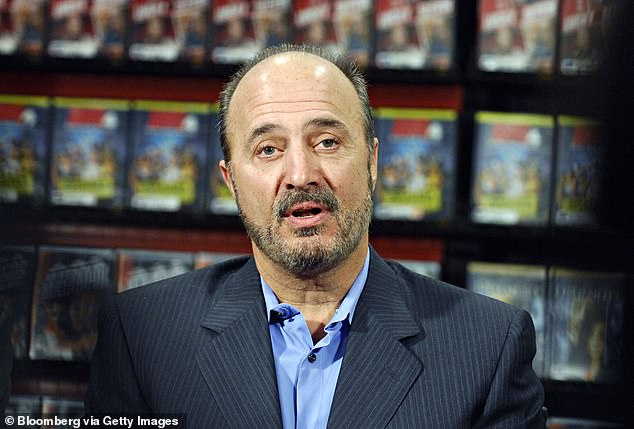 Blockbuster CEO John Antioco (seen in 2006) tried not to laugh when he heard Netflix’s offer, according to Netflix executive Marc Randolph

In 2007, the company first began offering streaming movies to its customers, as opposed to DVD rentals through the mail. Streaming eventually came to dominate the company’s business model.

The company’s decline was swift and fateful. With revenue crashing in the face of competition from Netflix and rental kiosks like Redbox, Blockbuster filed for bankruptcy protection in 2010.

Today, the last remaining Blockbuster store in the world, a privately owned franchise, is located in Bend, Oregon.