There have been many key milestones on the way to a trade deal between Britain and the EU — an agreement which ends the transition period and brings Brexit to fruition. Policy Editor DANIEL MARTIN reports.

David Cameron announces plans for an in-out referendum following a renegotiation of Britain’s membership in the EU.

Following decades of Tory splits on the European issue, he said: ‘Simply asking the British people to carry on accepting a European settlement over which they have had little choice is a path to ensuring that when the question is finally put — and at some stage it will have to be — it is much more likely that the British people will reject the EU. That is why I am in favour of a referendum.’

Nigel Farage’s Ukip Party wins more seats than any other UK party in the European elections, underlining the scale of national feeling in the issue. It is the first time in over a century that a national election had not been won by the Conservatives or Labour.

Having won a clear majority in the 2015 election, David Cameron announces his intention to hold an ‘in/out referendum’ on Britain’s membership of the European Union, with the date set for June 23, 2016

The Conservative General Election manifesto commits to ‘real change in our relationship with the EU’.

Cameron unexpectedly wins a majority in the election, forcing him to go ahead with the plans for a referendum. 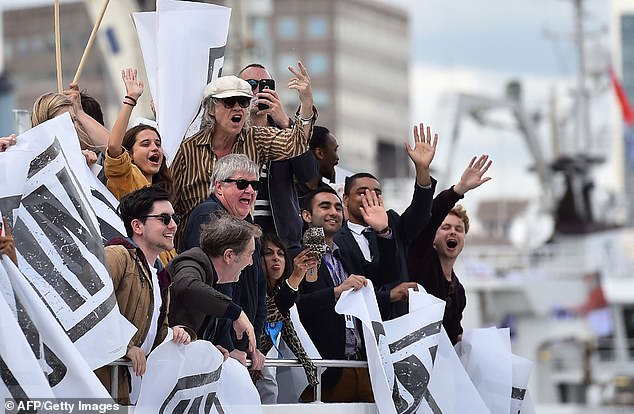 Showboating: Remainers, led by Bob Geldof, jeer at a flotilla of Brit trawlers on the Thames, calling for the restoration of their fishing rights in June 2016

In a statement to Parliament, Cameron sets out the terms of his renegotiation: economic governance, competitiveness, sovereignty, social benefits and free movement.

The European Union Referendum Act receives Royal Assent, thanks to Cameron’s majority. It means the vote on EU membership will now definitely go ahead.

At a European Council, Cameron unveils the result of his renegotiation round, including a commitment that Britain will not be bound by ‘ever closer union’. It also includes a commitment that there will be an ’emergency brake’ on migration from the rest of the EU. 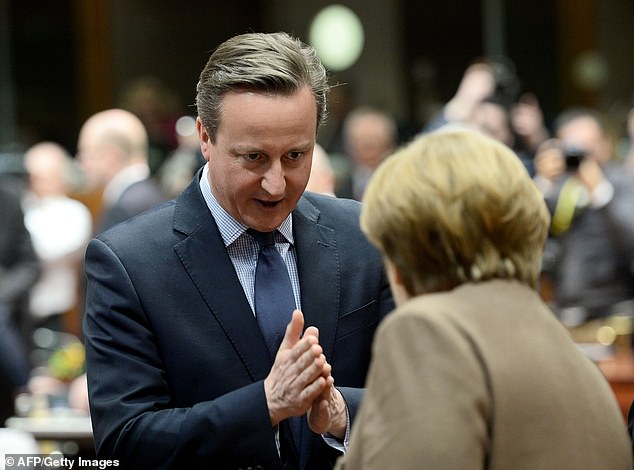 No go: Then PM David Cameron makes concession talks with Angela Merkel at an EU summit in Feb 2016, ahead of UK referendum

The PM names the date for the EU referendum: June 23, 2016. It sparked a four-month battle between the Remain side led by Cameron and the official Vote Leave campaign led by Boris Johnson. Another Eurosceptic group — Leave.EU — was led by Nigel Farage.

British people vote in huge numbers after one of the most divisive political campaigns in decades. It delivers a close result: 51.9 per cent voted to leave compared to 48.1 per cent who opted to remain.

On the steps of Downing Street Cameron announces his intention to resign. He delays the implementation of Article 50 — which triggers the process of leaving the EU. 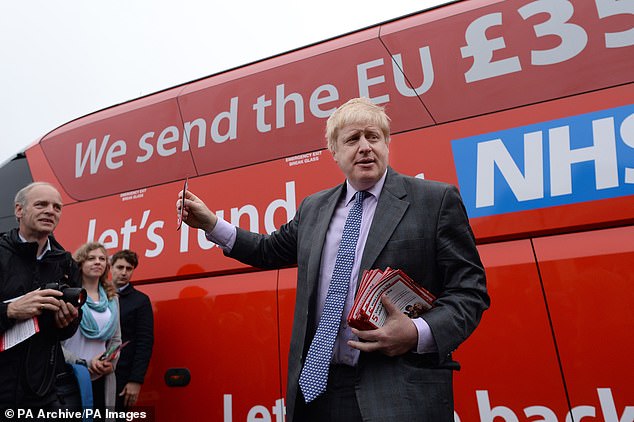 En route to victory: Boris Johnson in 2016 with that controversial bus promising £350 million a week for the NHS after a Brexit win

Boris Johnson, fresh from his victory in the Leave campaign, shocks Westminster by pulling out of the race to replace Cameron. He quits following a stinging attack by Michael Gove, another prominent Eurosceptic.

Theresa May becomes Prime Minister. Although she had campaigned on the Remain side, she won after promising ‘Brexit means Brexit’. 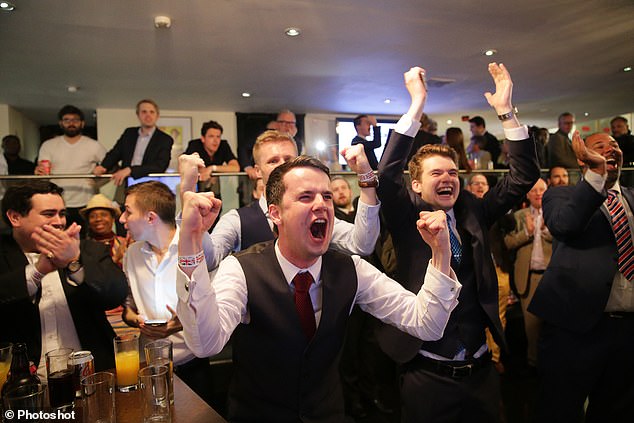 We’re out! Leave EU campaigners throw a wild celebration party at their headquarters after their success in the June 23 referendum

At the Tory Party conference, May says Article 50 will be triggered before the end of March 2017.

In a major speech she outlines her government’s red lines in its negotiation with the EU. She said she did not want Britain to remain in the single market or bound to customs union rules. 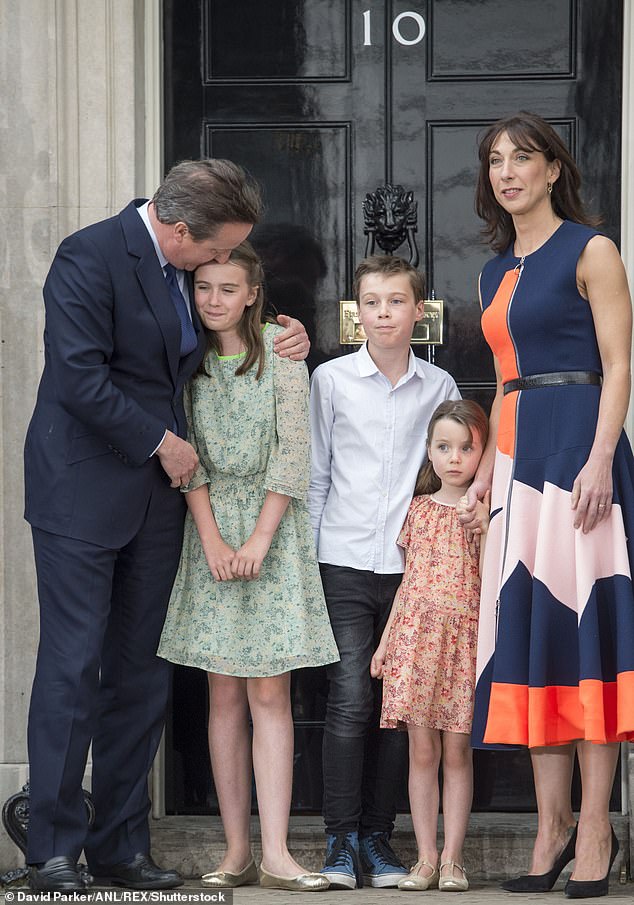 A kiss farewell: David Cameron, wife Samantha and their children leave Downing Street in July 2016, after he resigned as Prime Minister

MAY triggers Article 50: ‘An historic moment from which there can be no turning back,’ she says.

THE gamble dramatically backfires: the General Election results in a hung parliament. She vows to carry on as PM of a minority government.

First round of negotiations begin between Britain and the EU. Brussels’ chief negotiator Michel Barnier said he was not in mind to make concessions.

The Commons passes the EU Withdrawal Bill at second reading, ending the supremacy of EU law in the UK.

May delivers a major speech, which offers a transition period of about two years after Britain’s official withdrawal from the EU.

She strikes a last-minute deal with the EU to end phase one of negotiations: A divorce bill of £35 billion and no ‘hard border’ with Ireland.

May sets out her hopes for the future economic partnership with the EU. She said she wanted a ‘bespoke deal’, with Britain abiding by some rulings of the European Court of Justice.

The EU Withdrawal Bill receives Royal Assent. It had finally been passed by the House of Lords.

The Cabinet meets at Chequers to agree a collective position for future Brexit negotiations.

Brexit Secretary David Davis resigns: he says he did not ‘believe’ in the Chequers agreement. 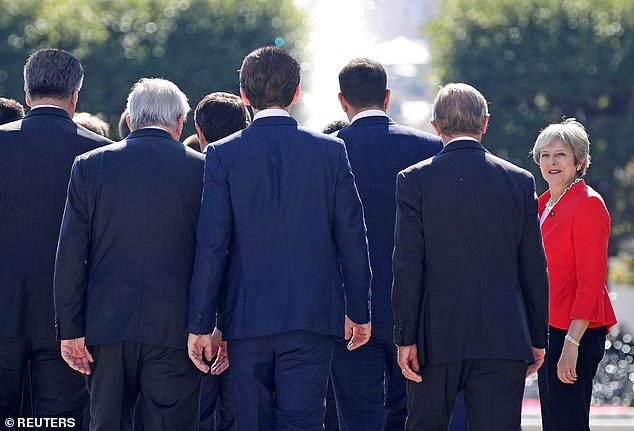 Theresa gets the cold shoulder: EU leaders turn their backs on Mrs May at a September 2018 summit

Johnson resigns as Foreign Secretary, saying Britain was heading for ‘status of a colony’.

May is humiliated at a summit in Salzburg as EU leaders publicly reject Chequers plan.

After months of negotiations, the 585-page draft Withdrawal Agreement is signed and published. It contains a UK-wide customs ‘backstop’ aimed at preventing new border checks in Northern Ireland — not acceptable to hard Brexiteers.

May suffers three defeats in the Commons as she presents her Brexit deal.

She survives a vote of confidence in her leadership of the Conservative Party. Tory MPs back her by 200 votes to 117.

She loses the first ‘meaningful vote’ on the Withdrawal Agreement by a huge majority of 230 — the largest defeat for a sitting government in history, prompting the threat of a vote of no confidence in her government.

With just 17 days to go before Brexit, the PM loses meaningful vote for a second time. 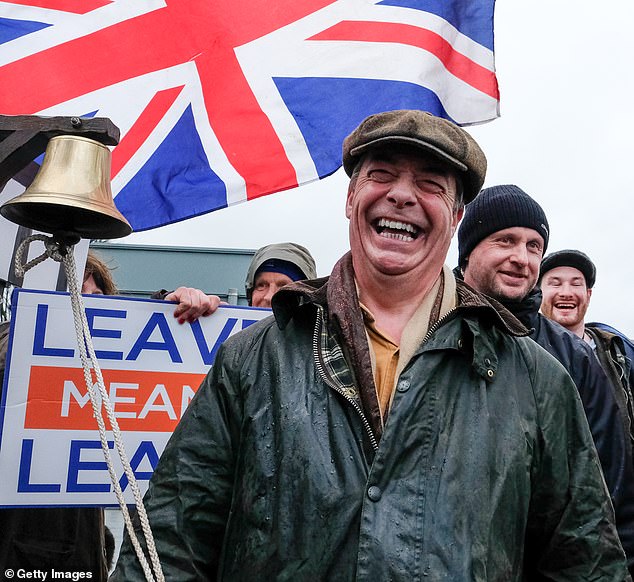 Ringing the changes: Nigel Farage on the Leave Means Leave march against the handling of Brexit in March 2019

MPs vote to reject a no-deal Brexit under any circumstances.

On a farcical day in the Commons, MPs hold a series of indicative votes on how to proceed with Brexit — but do not vote for any of them.

On the day Britain was supposed to leave the EU, May loses the third meaningful vote.

Article 50 is extended until October 31 in a bid to keep a deal alive between Britain and EU.

May unveils a new Brexit deal, which still includes the backstop plan for the Irish border — but proposes changes to the political declaration on the future relationship after Brexit.

May resigns as it becomes clear that her deal would not get through the Commons. She breaks down in tears as she says serving as Prime Minister was ‘the honour of my life’. 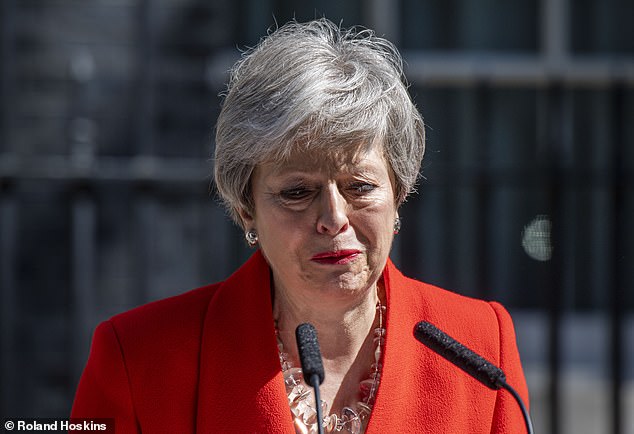 It’s all too much: Broken-hearted Theresa May is seen in tears as she announces her resignation in 2019

Johnson becomes PM. On the steps of Downing Street he pledges to ‘deliver Brexit and unite the country’.

He controversially prorogues Parliament until just before the end of Article 50 in a move which Commons Speaker John Bercow said was a ‘constitutional outrage’. 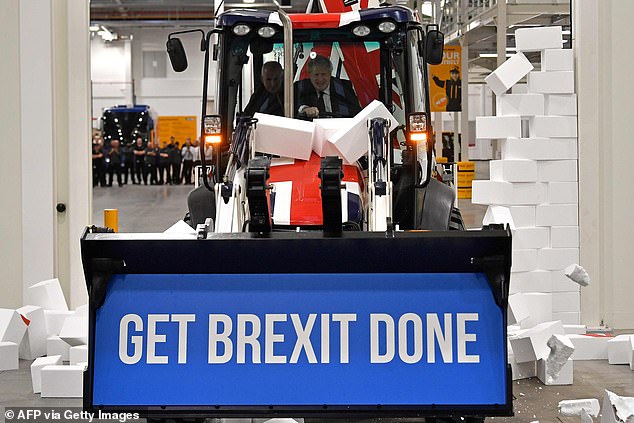 The Supreme Court rules the decision to prorogue Parliament is unlawful — forcing the return of MPs to the Commons the following day.

A new Brexit deal reached by Johnson was defeated in Parliament following a series of dramatic votes. He was forced reluctantly to ask for a further Brexit extension.

EU ambassadors agree to Britain’s request to further delay Brexit to January 31, 2020, apparently taking No Deal off the table. Two days later, Johnson’s call for an early General Election is passed by the Commons. 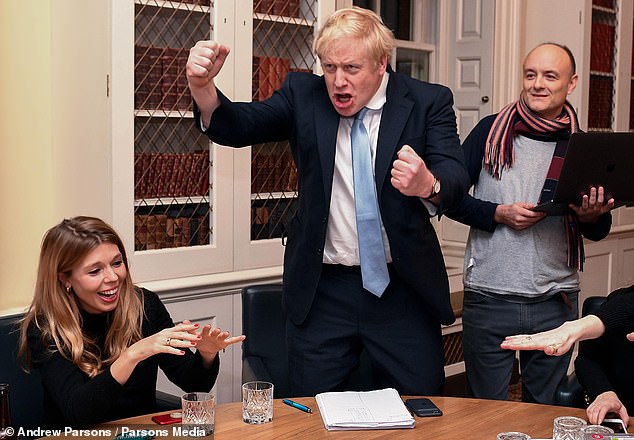 I’ve done it: Boris hears the result of the December 2019 General Election — and his 80-seat majority

The General Election results in a huge Tory majority of 80, as Labour, under Jeremy Corbyn, is reduced to its worst showing since 1935.

At 11pm, the UK finally leaves the EU and enters the transition period. Boris Johnson says: ‘For many people this is an astonishing moment of hope, a moment they thought would never come.’ 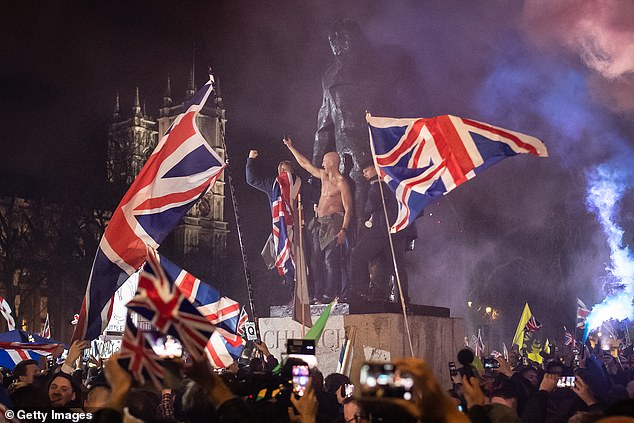 Independence day: Jubilant Brexit supporters celebrating in Parliament Square in London at 11pm on January 31, 2020, when the United Kingdom finally left the European Union — three-and-a-half years after the referendum

Trade talks begin between Britain and the EU, with the aim of coming up with a free trade agreement once the transition period ends on December 31.

After trade talks stall amid the worldwide coronavirus crisis, Johnson urges EU leaders to put a ‘tiger in the tank’ to ensure they succeed.

The Government sparks controversy by unveiling its UK Internal Market Bill, which would have allowed Britain to break international law with respect to the Irish border in the event of no deal. It is later dropped.

An important EU council — which was meant to be the deadline for trade talks to end — passes without agreement. Talks continue.

Britain and the EU are on the brink of a free trade agreement.

At 11pm, Britain will leave the transitional agreement: its last link to the EU.