For a brief moment, the shoe swaps feet and one of English football’s most shrewd recruiters begins to flick through his own CV.

‘I’m not a lawyer, an accountant, I haven’t got any football qualifications, I’m not a medical person… nothing,’ begins Phil Giles, Brentford’s co-director of football. ‘The one qualification I did have, though, turned out to be useful. Against all the odds.’

The other half of this odd couple, who have overseen an astonishing rise to the Premier League, laughs before taking up the tale.

‘When Covid first broke out, we didn’t know what to make of it,’ Rasmus Ankersen says. So a board meeting was called. The consensus? This will blow over in a couple of weeks. And then Giles dipped into his personal archives.

‘This is something I never thought I was going to use in football. But this is my PhD,’ he told them.

While reading statistics at Newcastle University, Giles had studied pandemics.

‘You know these guys who build statistical models that predict how these things will evolve and how many cases there are likely to be in the future? I was doing that,’ he explains.

He knew how the crisis could develop. So Brentford quickly negotiated wage deferrals with their squad.

‘By doing that early, we put ourselves in good shape to see it through without having to take emergency measures later on,’ Giles says. 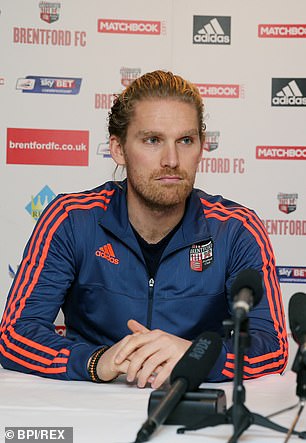 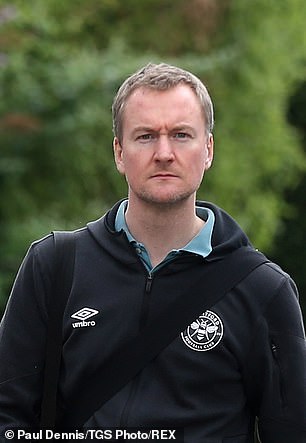 A vital staging post on Brentford’s road to promotion? Who knows. But symbolic, certainly, of their ability to move ahead of the curve.

As a student, Giles would use ‘past data to predict how these epidemics would spread’. ‘I stopped doing that in 2005 and started using past data from football games to predict future football results,’ he explains. ‘Far more interesting.’ And far more useful for much of the past six years.

Giles and Ankersen were brought together in 2015 by Matthew Benham, the boyhood Brentford fan turned professional gambler who now owns the London club. Together they have taken Brentford into the top flight for the first time since 1947. Against all the odds.

Giles had interviews at a hedge fund before joining Benham’s company, Smartodds, where he combined his twin passions — statistics and sport.

Ankersen, once a promising player at Danish side Midtjylland, saw his career cut short by injury. The 37-year-old took his coaching badges before travelling the world as an entrepreneur, author and speaker.

One talk, at a 50th birthday in Copenhagen was supposedly heard by a lady whose cousin had studied with Benham. They were introduced over LinkedIn and now these three have built a football fairytale. 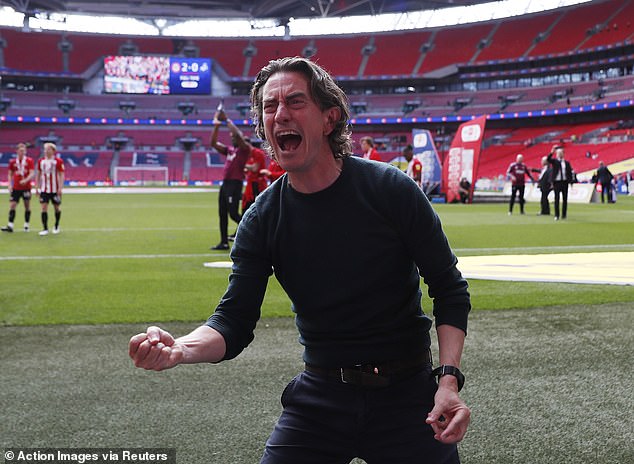 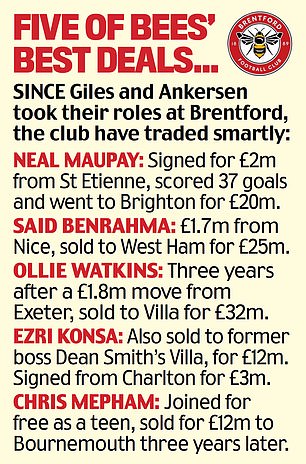 The guiding principles, which allow Brentford to punch above their weight, sound simple enough: unearth young talent, develop it and then sell for a profit.

Remarkable success in the transfer market has translated on to the pitch thanks to innovation, smart use of data and a human touch.

‘The league table isn’t always the best way of measuring (success),’ Giles insists. ‘It’s perfectly plausible that we actually do pretty well — we play quite well, improve the team and still get relegated… that’s just the way football is.’

For once, Brentford didn’t have to sell this summer. Instead they have made several more clever signings — including defender Kristoffer Ajer from Celtic in a club-record £13.5million deal.

Having two directors of football is not unique but Giles and Ankersen are a curious pair — they are strikingly different characters with contrasting qualities. ‘He never makes the teas!’ Giles jokes. 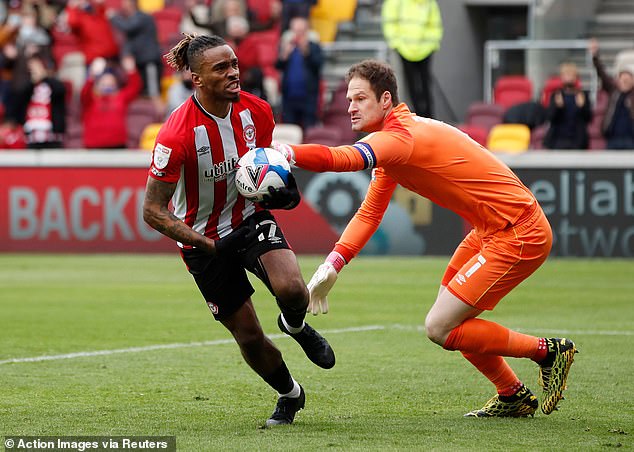 Crucially, Brentford have been able to hold onto important first-team stars like Ivan Toney

‘We probably tried to change too much at the same time,’ Ankersen reflects. ‘That set the project back 12 months or so.’ Now, though, Brentford have a gem in Thomas Frank and the peculiar paths trodden by their directors of football are bearing fruit.

‘We’ve come in to this world with a different view… that’s probably an advantage,’ Ankersen says.

‘Phil is a very good, logical, rational thinker… that’s a very good skillset to have in football because it’s often an emotional industry.’

The Dane, who is also chairman at Midtjylland (Brentford’s ‘little brother’), is more suited to selling the Bees’ vision to players.

Both have put expertise from outside football to good use — be it pandemics or running in East Africa. One of Ankersen’s books, The Gold Mine Effect, examines the secrets of high performance and why certain areas produce great athletes.

‘I visited this small village in Kenya that produced the best marathon runners. When I went for a run I saw three world champions,’ he explains. ‘When you are close to them t demystifies what it takes to be good… and it gives you belief.’ 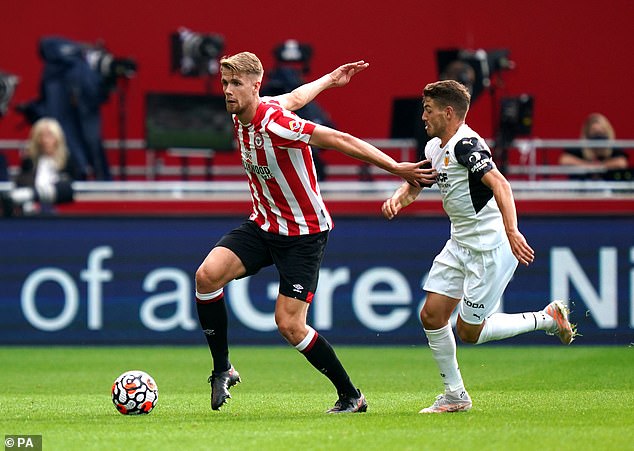 The issue? Football clubs, and especially their academies, tend not to follow suit.

‘You may have these fancy training grounds but you have people separated. The academy over there, the first-team over there,’ he says.

When Brentford closed their academy and created a B Team, it presented an opportunity. ‘One thing we did was really try and get them close to the first-team. So they eat together and often train together,’ Ankersen says. ‘We brought in a couple of 17-year-old Danish players and suddenly they speak to and eat with Christian Norgaard at lunch. He’s a Danish international who played in the Euros semi-final.’

Out-of-the-box thinking invariably attracts scorn from some within football. Take KPI’s (key performance indicators), which can be measured to demonstrate whether an organisation is meeting overall targets.

‘Last season in the strategy, there was nothing about achieving promotion.’ Ankersen says. The aim was simply: improvement.

Brentford divide the game into phases, searching for opportunities to make gains, examining how each department — sport science, style of play — can contribute. Two years ago, Brentford noticed they were conceding too many goals from set pieces. 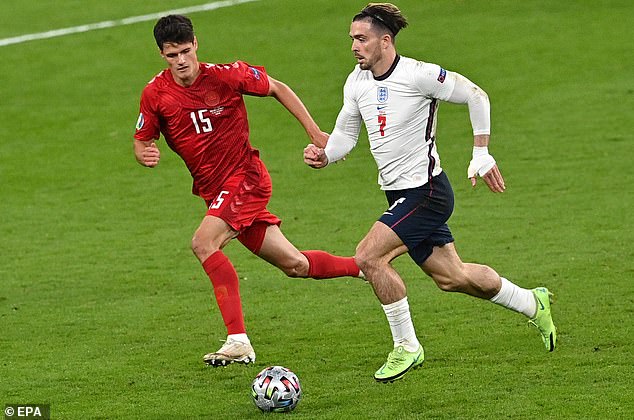 ‘I think we ended up being the best defensive set-piece team in the Championship in the last two years,’ adds Ankersen.

This is a two-way relationship. Ankersen insists business can learn from football’s use of predictive data to avoid complacency and inertia.

They have already explored several alternative avenues, using experts in sleep, throw-ins and ball-striking. What is the next frontier?

‘There will be loads,’ Giles says. ‘If I had a clear idea, I wouldn’t tell you!’ Ankersen believes Brentford’s upward curve depends primarily on the cumulative effect of everyday ‘good, rational, small decisions.’

‘We know how likely we are to stay up, probability wise,’ Giles adds. He won’t share those findings, but one thing is certain: Brentford won’t change tack.