Villages around the epicentre of China’s coronavirus outbreak are flocking to prevent residents from the largely quarantined Hubei Province from fleeing into their land, it has emerged.

Videos and pictures circulating on social media purport to show frightened locals living near the border of Hubei resorting to various methods – including destroying roads and using weapon-wielding guards – in a desperate bid to stop people escaping from the other side.

Six villages in the province of Hebei, which does not adjoin virus-ravaged Hubei, even started to build brick walls to barricade themselves and stop outsiders, a report revealed yesterday. 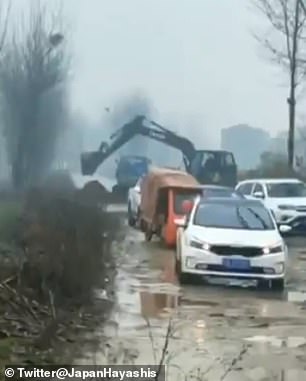 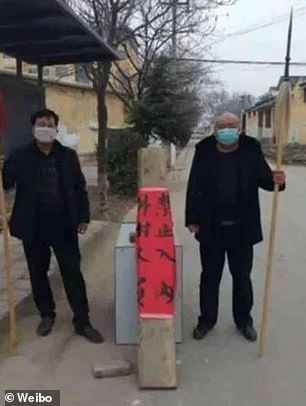 It seems that some villages have set up unofficial checkpoints manned by guards holding spears and blades to stop the coronavirus from spreading to their homes. The deadly coronavirus has killed at least 132 people – all in China – and sickened at least 6,168 worldwide 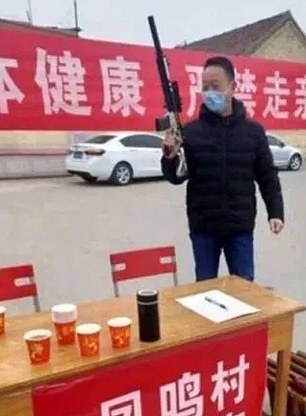 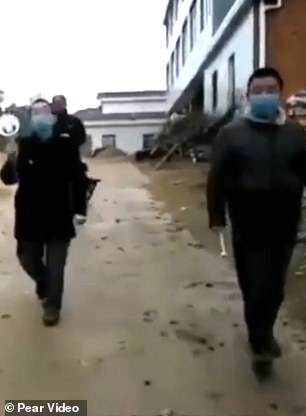 Apart from strict checks, local officials are also blasting messages with loudspeakers, banning the locals from having gatherings or visiting relatives and urging them to wear face masks

The deadly coronavirus has killed at least 132 people – all in China – and sickened at least 6,168 worldwide. It has so far been spread to 18 other countries and regions.

The intensifying outbreak has led authorities to quarantine at least 56 million people in Hubei Province, including its capital city Wuhan, and halted all means of transport going in and out of the province.

Hubei is situated bang in the middle of China and surrounded by five provinces – Shaanxi, Henan, Anhui, Jiangxi and Hunan – as well as one populous municipality, Chongqing. 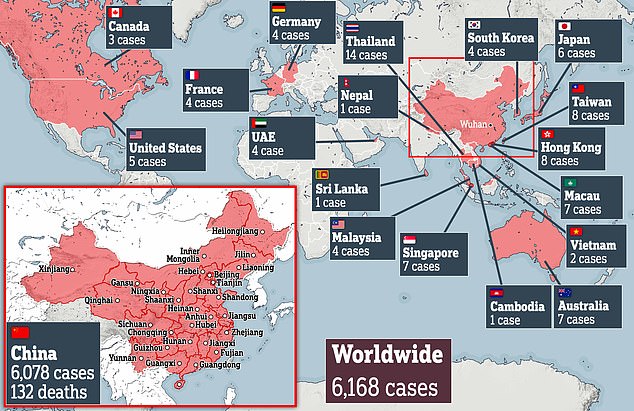 The infection has spread to at least 18 countries or regions outside of China, including the US, Canada, France and Germany, and infected more than 6,160 people around the world 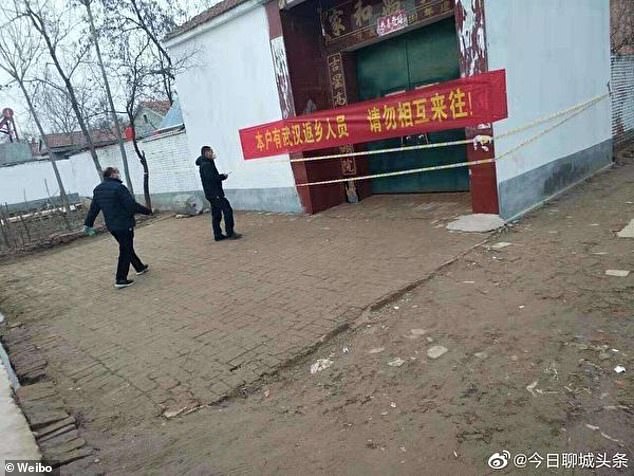 One trending picture shows Chinese officials sealing one house which is said to contain people recently coming back from Wuhan. A large red banner was put across the gate and it reads ‘This household has members returning from Wuhan, please do not interact’ 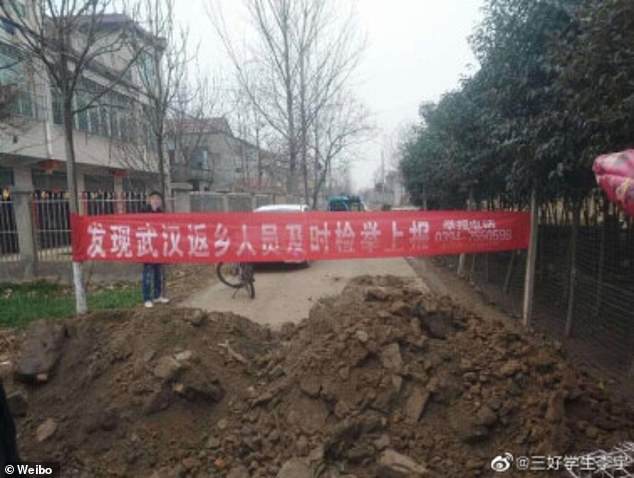 Another social media picture shows one community putting a warning at its entrance urging people to report those who just returned from Wuhan. The banner, which is erected on a pile of mud, reads: ‘Inform and report immediately once [you] discover people returning from Wuhan’

One video released by Chinese video news outlet Pear shows the village of Yichuan in Henan Province, which borders Hubei on the northern side, using a digger to secretly destroy a road in the middle of the night.

Another clip captures the road, also said to be in Henan, firmly blocked by mud. A signboard is seen placed on top of the obstruction and it reads ‘new type of pneumonia, control and prevention of the outbreak, no through traffic’.

In a third piece of footage, Henan village officials are seen blasting messages with loudspeakers, banning the locals from having gatherings or visiting relatives and urging them to wear face masks. 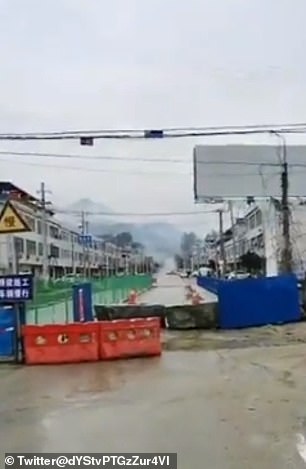 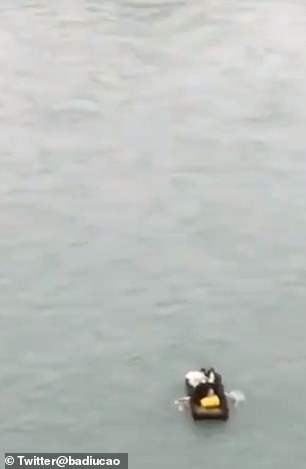 One piece of footage (left) shared on Twitter appears to show a county blocking its entrance to stop people escaping from another country on lockdown; another video (right) purports to show Hubei residents trying to go to Hunan on a boat after allegedly being stopped on land 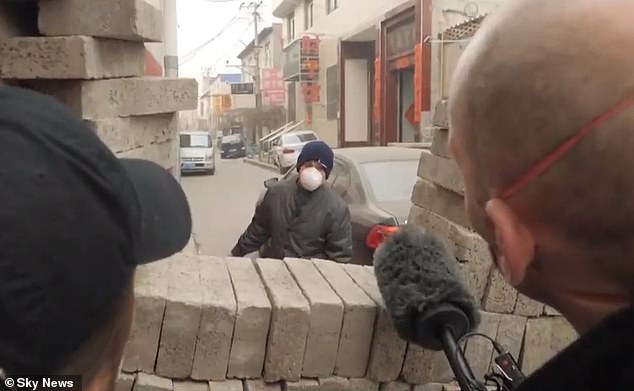 Residents in Xikangzhuang, close to the border of Shanxi province, have built entire walls out of brick, reportedly to ‘stop outsiders coming to our village’ 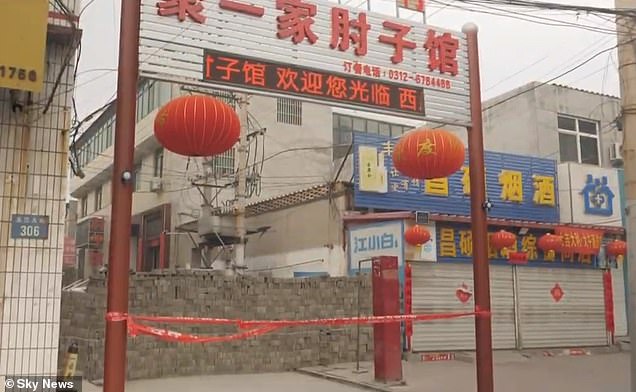 Six villages in Hebei – the province surrounding the capital Beijing, where dozens of cases have been confirmed – have taken measures to lock down, Sky News reported 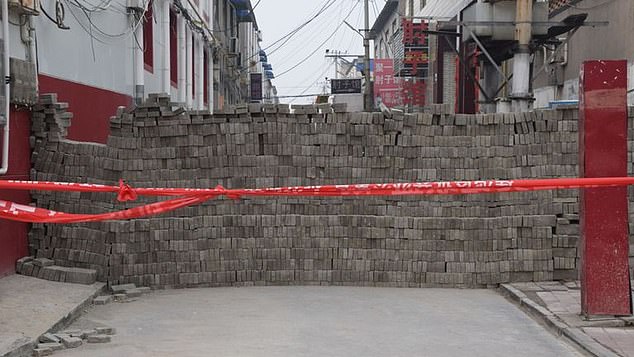 Pictured, the wall in Xikangzhuang, which is in Hebei – the province surrounding the capital Beijing, where dozens of cases have been recorded

WUHAN CORONAVIRUS: WHAT WE KNOW SO FAR

The virus has been identified as a new type of coronavirus. Coronaviruses are a large family of pathogens, most of which cause mild lung infections such as the common cold.

Yes – 133 people have so far died after testing positive for the virus.

The virus’s genetic sequencing was released by scientists in China and countries around the world have used this to create lab tests, which must be carried out to confirm an infection.

Delays to these tests, to test results and to people getting to hospitals in China, mean the number of confirmed cases is expected to be just a fraction of the true scale of the outbreak.

Other videos on Twitter (here and here) seem to show similar activities around the quarantined areas, but MailOnline cannot independently verify their authenticity.

One video shared by Shanghai-born, Australia-based artist Badiucao appears to show desperate Hubei residents using small boats to try to escape to Hunan, the province to the south.

According to the audio of the footage, those residents had allegedly been stopped by police on the other side while trying to go there by land.

In other viral pictures, villages officials have apparently sent weapon-wielding guards to prevent outsiders from entering their communities, and some of the guards can be seen holding blades and spears.

Sky News found six villages in Hebei – the province surrounding the capital Beijing, where dozens of cases have been confirmed – taking drastic measures to lock down into their own hands.

Residents in Xikangzhuang, close to the border of Shanxi province, have built entire walls out of brick, reportedly to ‘stop outsiders coming to our village’.

Dongyinzhuang citizens have planned to create their own guardhouse – a portcabin that has been winched into place by worried residents who have yet to hear from Government officials about what to do.

The central government on Tuesday issued order to ban local officials from setting up checkpoints and block roads without authorisation.

And on Monday China’s state newspaper, CCTV, urged its citizens not to discriminate people from Hubei.

Workers in the Chinese city of Wuhan are busy building its second coronavirus hospital as the country desperately tries to contain the accelerating outbreak after the death roll soared to 132.

Amazing time-lapse footage shows heavy-duty vehicles working in full gear to construct the Leishenshan Hospital which is expected to open in a week.

More than 6,000 people around the world are now confirmed to have been infected with the Wuhan coronavirus and 132 have died in China.

The United Arab Emirates (UAE) has become the latest country to declare cases – an unknown number among a family travelling from China – and Germany has now diagnosed four people with the infection.

Germany also yesterday revealed it had hosted the first human-to-human transmission in Europe, between a German man and a woman travelling from China.