Roads narrowed so that pavements can be widened. Streets reduced from two lanes to one. Extra cycle lanes.

Town-centre parking spaces suspended. Major diversions. Under the guise of protecting us from Covid, councils all across the country have introduced a host of tough restrictions on motorists.

Of course, everything necessary must be done to prevent the spread of coronavirus but many believe this is being done as an excuse to punish drivers as part of a wider campaign against car use.

What’s more, these measures are killing trade on high streets at a time when the economy is in desperate need of all the help it can get.

Measure like this, in Manor Lane, Lewisham, are being introduced by councils across the UK as the Government invest £225m in making the country more sustainable during pandemic 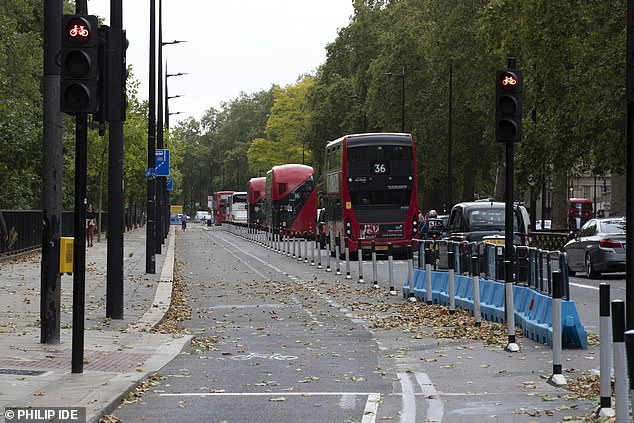 Typical is what is happening in Bristol, where van driver Steve Weeks is at his wits’ end.

He says: ‘These measures are adding about 20 minutes per hour to every journey. Which means I’m working longer for less. It’s crazy.’ I spoke to Steve as he sat stuck in traffic at a junction on Lewins Mead, one of the main routes through the city.

‘It was 3pm on Wednesday, when traffic would usually be light, but a tailback snaked behind and ahead of Steve for more than a mile.

‘On August 3, the council reduced the space for powered vehicles on Lewins Mead from two lanes to one.

‘Since then, the nearside lane has become a thoroughfare for bicycles. Incidentally, while at the junction for 30 minutes, I saw only one cyclist use the bike lane.’

On-street parking has been suspended in several locations, roads have been closed and some key left and right turns are about to be banned.

One result is that cars and vans have effectively been banned from the road into the city centre from the main railway station, Temple Meads – forcing drivers to use a long, circuitous alternative.

The impact on businesses has been devastating, but more road closures – another 12, the city council warns – are imminent.

The Government is spending £225 million on similar measures across the country, most notably in London, Oxford, Manchester, Birmingham, York, Edinburgh, Nottingham, Derby and Cardiff.

There has been scant public consultation but everywhere the justification is the same: Covid offers an ideal opportunity to provide a green stimulus to economic recovery, encourage people out of their cars and, in the process, to get fit and lose weight to protect them against the virus.

Bristol’s Labour mayor, Marvin Rees, says the changes will help the city ‘emerge from this crisis in a more inclusive and sustainable way’ and that they will ‘protect public health and unlock barriers to inclusive economic growth, with cleaner air, safer and better public transport, and improved walking and cycling routes for everyone’.

His enthusiasm follows a major initiative launched by the Department for Transport in May. 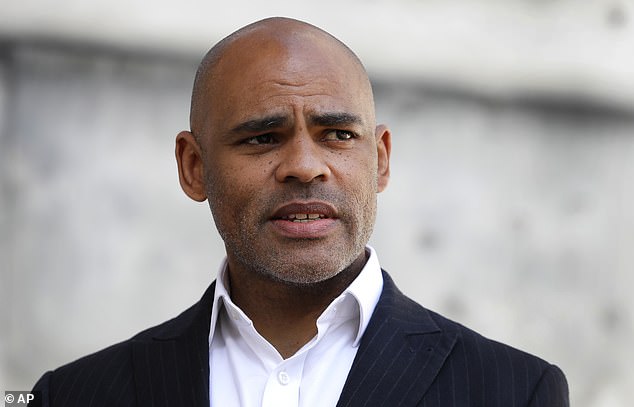 Bristol’s Mayor Marvin Rees, pictured, says changes will help the city ‘emerge from this crisis in a more sustainable way’ as city is target for major Department for Transport funding

It has set aside £225m for ‘emergency active travel schemes for local authorities due to the pandemic’. (Active travel is Ministry-speak for walking and cycling.)

The department says the money will enable local authorities to produce ‘new cycling and walking facilities’ and its altered road and parking schemes will promote recovery.

However, Emergency Active Travel Fund money comes with a string attached. Councils must satisfy officials ‘they have swift and meaningful plans to reallocate road space to cyclists and pedestrians (both groups rather than one or the other), including on strategic corridors.

Schemes that do not meaningfully alter the status quo on the road will not be funded.’ Motorists, in other words, must lose out.

Many, though, see this Government initiative as deeply misguided.

In Bristol’s Galleries shopping mall, about a third of the stores are closed or boarded up. Others risk shutting for good or are barely clinging on.

‘When we reopened after lockdown, at first things were good,’ says Naheed Iqbal, 45, proprietor of House of Colours, an Indian clothing and jewellery store.

‘But customers now say they just can’t get here. They want to drive and park because they’ll have heavy bags.

‘The council says closing roads will encourage business to come back but it’s killed mine. I’m giving up – though it means I’m going to lose everything I invested in it.’ Manzar Nawaz, 40, co-owner of high-end men’s outfitters Suits Plus, tells me he had only one customer all morning. He claims the road closures led to an immediate reduction in the number of customers.

He’s had to let three staff go and he fears he might have to close.

At his empty hairdressing salon, proprietor Toni Carobene says he was ‘flat-out busy for ten days’ after he reopened. But after the council closed the roads, trade crashed.

‘Many of my customers come from outside the city, and now it’s completely dead.’ 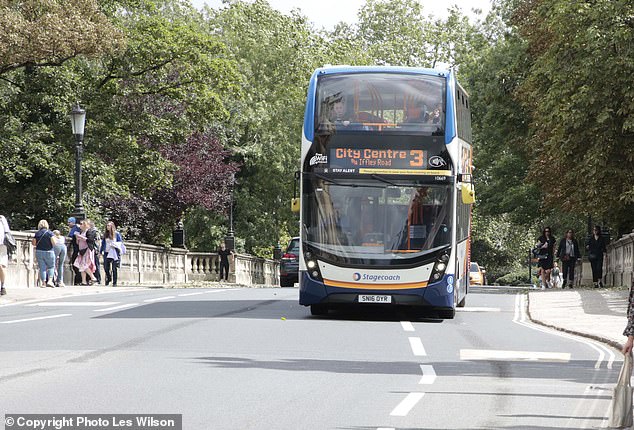 Oxford, pictured, is in line to get Government funding to install cycling and walking measures along with London, Manchester, Birmingham, York, Edinburgh, Nottingham, Derby and Cardiff

Of course, for some, banishing motor vehicles is a long-cherished dream. Last year, the Left-wing think-tank Common Wealth – its board members include Ed Miliband – published a report entitled Away With All Cars, arguing that to meet emissions targets, Britain must reduce overall traffic by between 20 and 60 per cent by 2030.

‘That,’ it commented drily, ‘is a lot of traffic to lose.’

By the same date, it suggested, London should be ‘private-car free’.

Central to this ‘war on cars’ is UK100, which describes itself as a ‘network of highly ambitious local government leaders, who have pledged to secure the future for their communities by shifting to 100 per cent clean energy’.

Founded in 2016, its members include dozens of Labour council chiefs and major figures on the Left, such as London Mayor Sadiq Khan, his Manchester counterpart Andy Burnham, and Bristol’s Marvin Rees.

One of UK100’s main funders is the European Climate Foundation (ECF), which is funded in turn by an array of American green billionaires. ECF also makes hefty donations to radical groups such as Extinction Rebellion.

Last October, UK100 called on the Government to give councils ‘the powers and funding they need to deliver zero emission transport networks, [and to] encourage and enable behaviour change, including the promotion of active travel’ – by cracking down on motorists and boosting cycling and walking.

UK100’s influence is significant: it currently has one of its staff seconded to Bristol City Council. Crucial, too, is the support of the Department for Transport.

For the fact is that Covid, as more honest anti-car campaigners admit, has accelerated changes that otherwise might have taken years.

Meanwhile, in the real world, drivers are taking a huge hit.

In Oxford, the roadway on Magdalen Bridge, the only route across the River Cherwell between the city centre and the suburbs of east Oxford, where tens of thousands live, has been narrowed to make way for two super-wide bike lanes.

As a result, the road is only 15.7ft wide. And with double-decker buses being a minimum of 9.2ft wide, two can’t pass each other without having to go into the cycle lanes and risk flattening cyclists.

Similar bottlenecks abound in London. For example, since June, Park Lane has been reduced from three lanes to one to accommodate new cycle lanes – even though less than 50 yards away inside Hyde Park, a long-established cycle path runs exactly in parallel – and has the advantage of being away from cars.

One of the worst of several new, almost permanent, jams in London is on the formerly three-lane Euston Road, a key east-west artery.

Now, to drive the new single lane from Regent’s Park to King’s Cross – a journey of 1.5 miles – can take up to 30 minutes. 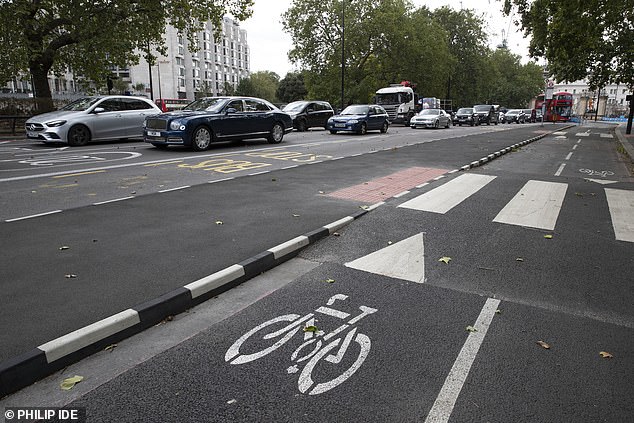 All of these changes have had a dramatic effect but many more are in the pipeline.

Eventually, the Department for Transport intends to spend £2 billion on Active Travel.

In a foreword to a report on the subject last month, Prime Minister Boris Johnson said he looked forward to ‘the most radical change to our cities since the arrival of mass motoring’.

Part of this initiative included handing out 50,000 Fix Your Bike vouchers worth up to £50, to be used by people to get their bicycles roadworthy.

Indeed, several cities plan to restrict drivers from travelling between areas except via outer ring roads.

For example, it is planned for Birmingham to be divided into six ‘segments’.

According to the city council, ‘to move from one segment to another in a private vehicle you would have to go back out on to the A4540 Middleway [the city’s inner ring road]. Movement between the segments would be unrestricted… for public transport, pedestrians and cyclists’.

The result is that journeys that now take a few minutes will be much longer – and, ironically, considering this is part of a drive to make us more green, they will produce more exhaust emissions.

Oxford faces something similar. In the name of creating ‘low traffic neighbourhoods’, the Tory-lead county council is rushing forward a scheme for gates that allow only buses to pass through.

This will sever great parts of the city from each other unless drivers go via the ring road.

The inevitable consequence is that local journeys by car such as a supermarket shop or to the John Radcliffe Hospital will, for thousands of people, become much longer and more difficult.

Significantly, documents obtained under the Freedom of Information Act by fledgling opposition group Reconnecting Oxford show there has been no assessment of the scheme’s likely impact on traffic, pollution or business. There has also been no formal consultation.

However, such niceties are not legally necessary.

By using Emergency Traffic Orders, valid for up to 18 months, councils can do with their roads pretty much what they want – and assess the impact afterwards. 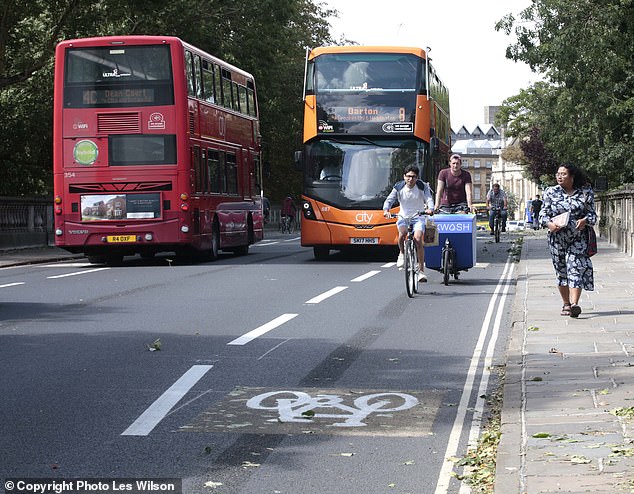 And yet no one in business seems to agree.

‘They’re justifying this as a way of helping the city out of Covid,’ the veteran hotelier and restaurateur Jeremy Mogford says. ‘The truth is that it’s going to make it far more difficult.’

Besides the bus gates, planned new parking and loading restrictions and further pedestrianisation would create still more pressure on trade, he says.

‘It’s as if the extreme end of Extinction Rebellion has got some hold over the policy-makers. They’ve become zealots – they just don’t want motorised vehicles.’

Understandably, we are witnessing a backlash – from local residents’ groups and national organisations, such as the Alliance of British Drivers and the Road Haulage Association.

Duncan Buchanan, the latter’s director of policy for England and Wales, says: ‘The Covid emergency is being exploited to push through fantasy projects.

‘People are forgetting that we need to move around – that our food comes on trucks, for example. There are innumerable necessary road journeys made every day, but we’re in danger of following a dogma that’s destroying the road network, destroying business and competitiveness, and so ruining people’s lives.

‘Roads are functional places where we connect with each other, and they need to be managed for all users’ benefit – not just cyclists.

‘The Government needs to remember: this isn’t being driven by ordinary people, it’s totally alien to them.

Stuck in the Bristol tailback, van driver Steve Weeks agrees. ‘They should have picked a different time – not now, when we’re trying to get over Covid.

‘It’s too much. The traffic was bad before but now it’s just silly. It’s unsustainable.’