How COVID spreads on longhaul flights: Single passenger infects 15 others on 10-hour trip to Vietnam

A single passenger infected 15 others with COVID-19 on a 10-hour trip from London to Vietnam, a new study published by the Centers for Centers for Disease Control has shown.

The report shows how the unidentified woman, 27, unknowingly spread the virus back in March. It shows how the female traveler, who had a sore throat prior to flying, infected 12 passengers in business class, two in economy and a crew member out of the 217 on board.

‘She was seated in business class and continued to experience the sore throat and cough throughout the flight’, the report in the journal Emerging Infectious Diseases states. Days later the 27-year-old businesswoman tested positive for coronavirus.

In the coming days, the number of U.S. deaths is set to hit 200,000, according to the official tally, though the real number is certainly higher. The virus has infected more than 6.7 million Americans. Nearly 11,000 people have been exposed to the virus on planes, The Washington Post reports.

The report adds: ‘The most likely route of transmission during the flight is aerosol or droplet transmission from case 1, particularly for persons seated in business class.

‘The risk for on-board transmission of SARS-CoV-2 during long flights is real and has the potential to cause COVID-19 clusters of substantial size, even in business class–like settings with spacious seating arrangements well beyond the established distance used to define close contact on airplanes.’

A single passenger infected 15 others with COVID-19 on a 10-hour trip from London to Vietnam, a new study published by the Center for Centers for Disease Control has shown. An airline staff member wears surgical mask inside an airplane at the Hong Kong International Airport, stock image 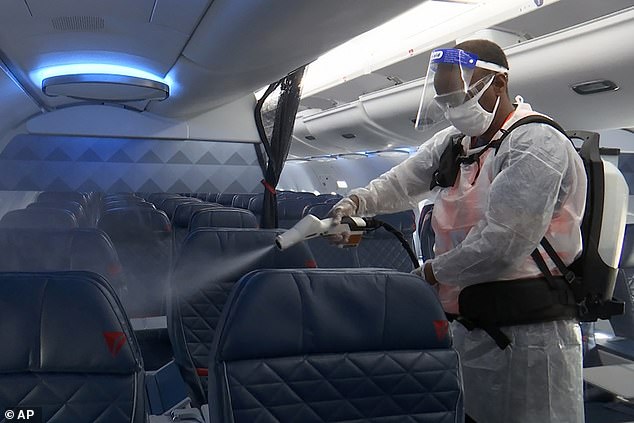 Melaku Gebermariam uses an electrostatic sprayer to disinfect the inside of a Delta Airplane between flights on July 22, at the Ronald Reagan Washington National Airport in Arlington

Official guidance on the CDC website states: ‘Air travel requires spending time in security lines and airport terminals, which can bring you in close contact with other people and frequently touched surfaces.

‘Most viruses and other germs do not spread easily on flights because of how air circulates and is filtered on airplanes.

‘However, social distancing is difficult on crowded flights, and sitting within 6 feet of others, sometimes for hours, may increase your risk of getting COVID-19.’

But researchers from Vietnam’s National Institute of Hygiene and Epidemiology argue: ‘Although the international flight industry has judged the risk for in-flight transmission to be very low, long flights in particular have become a matter of increasing concern as many countries have started lifting flight restrictions despite ongoing SARS-CoV-2 transmission.’

A second study also looked into a cluster of four people on one flight from from Boston to Hong Kong on March, Forbes reports.

In that case researchers wrote: ‘Given the case histories and sequencing results, the most likely sequence of events is that one or both of passengers A and B contracted SARS-CoV-2 in North America and transmitted the virus to flight attendants C and D during the flight.

‘The only location where all four persons were in close proximity for an extended period was inside the airplane.’

Masks were not mandatory in either case study looked at. 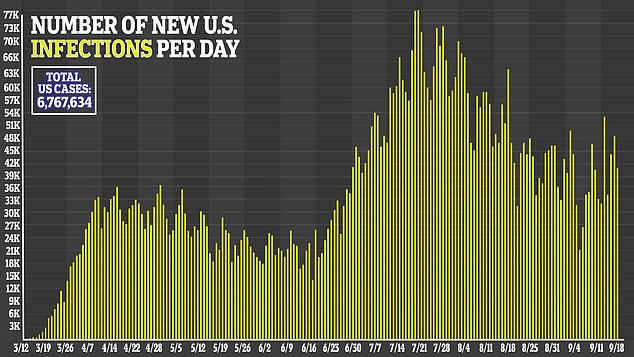 The US set a one-day record with over 1 million coronavirus diagnostic tests being performed Saturday, but the country needs 6 million to 10 million a day to bring outbreaks under control, according to various experts.

The virus continues to spread and there is currently no approved vaccine. Some public health experts fear infections could spike this fall and winter, perhaps even doubling the death count by the end of the year.

Yet the grim milestone and the prospect of more American deaths to come have prompted no rethinking from the president about his handling of the pandemic and no outward expressions of regrets. 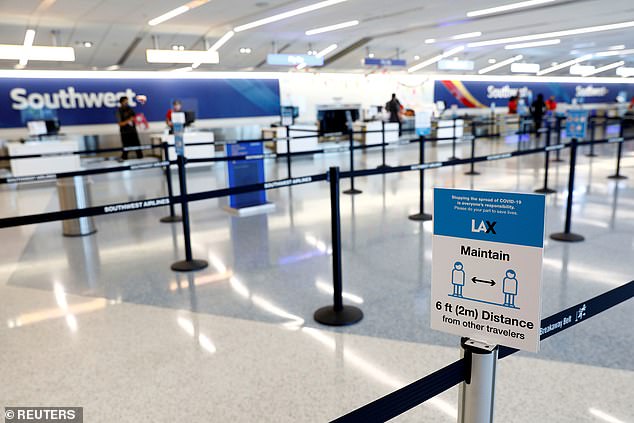 Social distancing sign is displayed at a check-in area for Southwest Airlines Co. at Los Angeles International Airport. In the coming days, the number of U.S. deaths is set to hit 200,000, according to the official tally, though the real number is certainly higher. The virus has infected more than 6.7 million Americans. 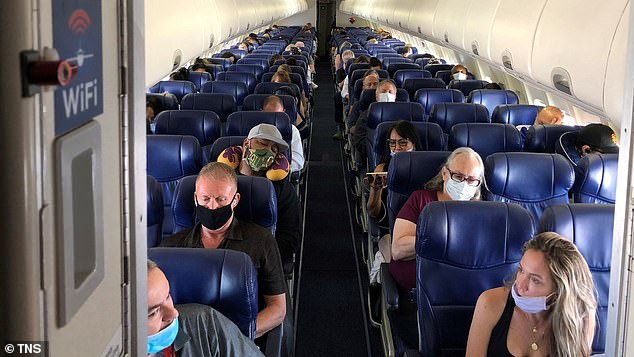 Masked passengers fill a Southwest Airlines flight from Burbank, California, to Las Vegas on June 3. A report shows how the unidentified woman, 27, unknowingly spread the virus back in March. It shows how the female traveler, who had a sore throat prior to flying, infected 12 passengers in business class, two in economy and a crew member out of the 217 on board

Instead, Trump has sought to reshape the significance of the death tally, trying to turn the loss of 200,000 Americans into a success story by contending the numbers could have been even higher without the actions of his administration.

The country performed 1,061,411 tests on Saturday, according to data from The COVID Tracking Project, a volunteer-run effort to track the outbreak. The record comes after testing has fallen for several weeks.

Since the start of the pandemic, testing shortages have hampered efforts to curb the spread of the virus. At one point during the summer, Houston residents lined up in cars and waited hours for tests, even sleeping in their vehicles overnight. Miami saw similar lines.

In March, Trump said ‘anyone who wants a test, gets a test.’ That goal has yet to be achieved.

In May the Institute for Health Metrics and Evaluation at University of Washington estimated around 180,000 deaths by October. Their predication now stands at around 378,000 deaths by January.