A woman whose deceit sent her fiance to jail for a crime he didn’t commit was caught out by a detective who couldn’t shake the feeling she was lying.

Daniel Jones, 31, spent four-and-a-half months in Goulburn prison, 195km south-west of Sydney, in 2014 after his then fiancee Sarah Jane Parkinson made 32 horrific allegations against him, including rape and domestic violence.

Following her hunch, Detective Sergeant Leesa Alexander was able to discredit several of Parkinson’s claims of violence and theft – proving she was a compulsive liar.

‘I thought if she’s lied to me, perhaps she’s lied to the other investigators… my blood ran cold. I was horrified that that may be the case,’ Detective Sergeant Alexander said.

Mr Jones’ family was forced to pay for his defence after he was falsely charged – leaving them $600,000 in debt, Nine News reported. 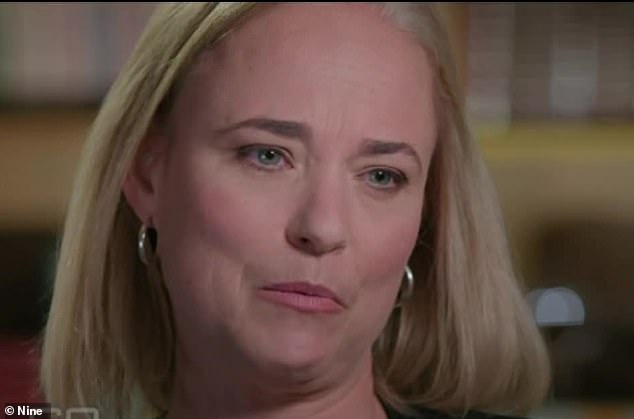 Parkinson claimed she had been driven off the road and attacked by a man wielding a steak knife – however police later learned the weapon belonged to a set she owned.

She also claimed she was the target of burglaries carried out by Mr Jones’ family and that her stolen iPad was at their home.

Parkinson said someone had broken into her car while she was at work.

However, CCTV footage showed Parkinson leaving her place of employment on the day of the alleged break-in and unlocking her own car.

Detective Sergeant Alexander was able to track Parkinson’s movements using the GPS on her car, and found Parkinson had planted the iPad outside the house herself.

‘She was lying to me, she’s lied to me now on four occasions, there’s probably an innocent person in jail,’ Detective Sergeant Alexander said.

‘I found that very difficult, that a person could be so happy while someone else is in jail,’ she said.

‘You’re saying that you drove past their house, it doesn’t make any sense,’ Detective Sergeant Alexander said.

‘I know, I just…’ replied Parkinson.

‘I think it was just sheer desperation, like it’s been a rough few years with Daniel.’

Detective Sergeant Alexander discredited her claims with a timestamped social media photo that showed he wasn’t at the scene of what his fiancee claimed was a brutal sexual assault.

Mr Jones’ sister-in-law had taken a photo of Mr Jones holding his baby nephew at the time of the supposed assault.

The information attached to the photo included a time stamp and Mr Jones’ location.

‘As far as I was concerned and what the evidence showed is [Mr Jones] wasn’t responsible for any of it. It didn’t happen,’ Detective Sergeant Alexander said. 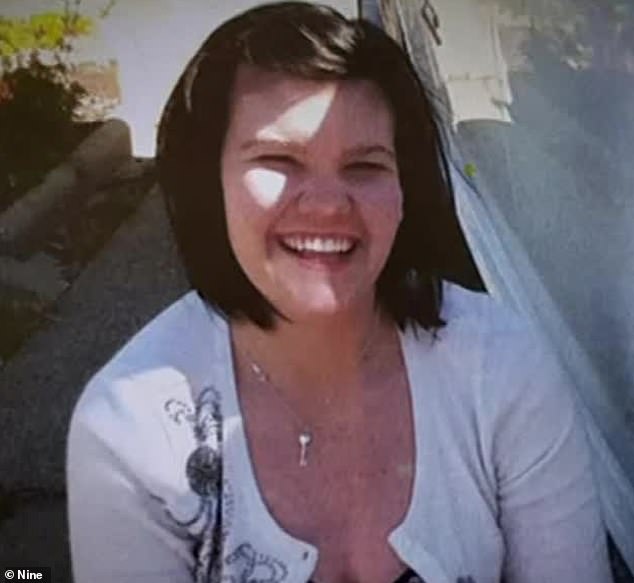 Mr Jones was not the first man Parkinson (pictured) accused of rape. She alleged a Canberra man, the father of her best friend at the time, sexually assaulted her

Despite the evidence, Mr Jones was sent to Goulburn prison while his devastated parents prepared for the battle of their lives.

In a whirlwind romance, the young couple quickly made plans to marry and Mr Jones even built a house so they could live together.

‘She was cute and innocent, a bit of old-fashioned, and she was always dressed and frocks she always wore nice dresses and all that kind of thing,’ Mr Jones told 60 Minutes of his ex-fiance.

Shortly after moving in together, Mr Jones’ life began to fall apart at the hands of the woman he thought was the love of his life.

Parkinson got a job at Queanbeyan Police as a clerical assistant and began feeding her colleagues lies about her partner.

The young woman, who the Jones’ described as ‘clumsy’, would turn up to work with self-inflicted bruises and marks.

Almost two years into their relationship, Mr Jones was called into Queanbeyan Police Station where he was hit with an Apprehensive Violence Order, amid allegations he was assaulting Parkinson.

Mr Jones confronted Parkinson and he believed her reassurances that her colleagues were being over-protective. 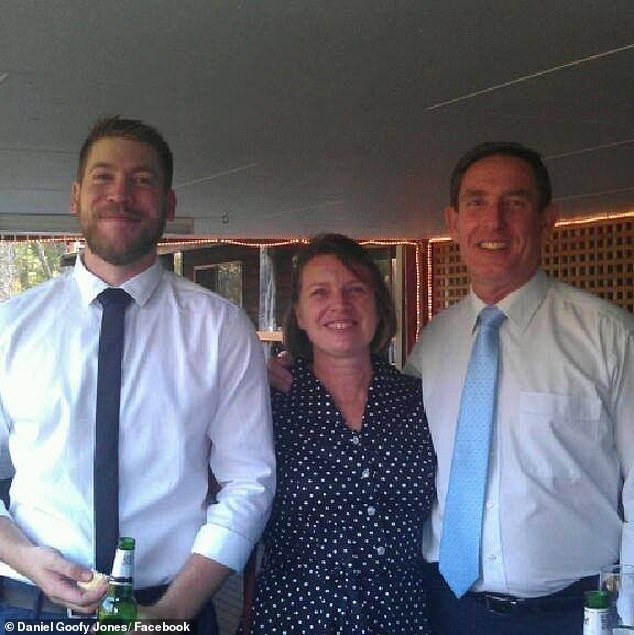 Mr Jones’ father Ian said he also confronted Parkinson and she told him the allegations were false and that couple were madly in love.

Ian said he began to suspect the family had let a ‘rat’ into their home.

The couple continued to live together, but Mr Jones became increasingly concerned his partner was cheating on him with a policeman.

The affair came to light when Mr Jones questioned Parkinson and their relationship came to an end in November 2013.

Days after their break up, Parkinson ramped up her allegations against Mr Jones, accusing him of urinating on her, locking her outside of their home in the rain and hitting her in the face with a plank of wood.

‘You’ve come from meeting this innocent, sweet girl to this premeditated monster who is capable of making all these allegations against you without a care in the world,’ Mr Jones said.

On Christmas Eve 2013, Mr Jones was finishing his shift as a prison officer when he was arrested in front of his colleagues and hit with 32 charges related to domestic violence.

Mr Jones was released on strict bail conditions and moved back in with his parents – while Parkinson stayed in the former couples’ home with her new lover and his three children.

On March 21, 2014, police arrived at the Jones’ home without warning and he was arrested. 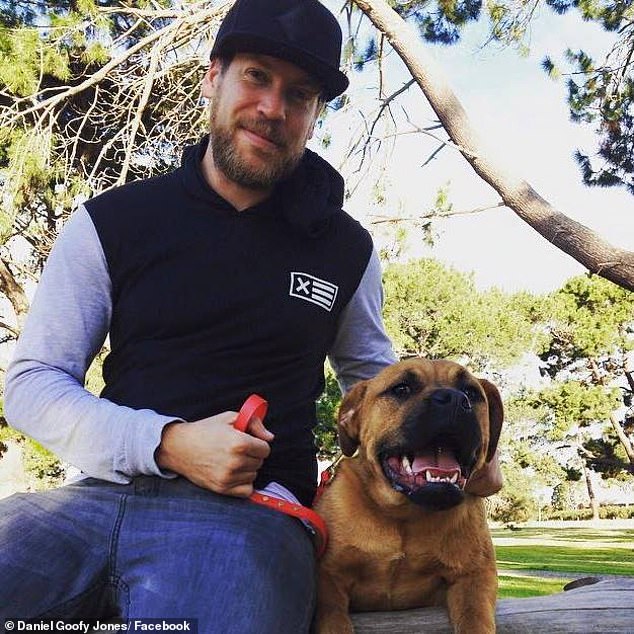 Daniel Jones, 31, spent four and a half months in Goulburn prison, 195km south-west of Sydney, in 2014 when his ex-fiancee accused him of rape

Once Detective Sergeant Alexander had discovered that Parkinson was lying, the ACT Department of Public Prosecutions called an emergency bail hearing and Mr Jones was released from jail.

Mr Jones’ mum Michelle described Detective Sergeant Alexander as a ‘Godsend’ and Ian said his son would probably still be in jail without her.

Parkinson had made false allegations of rape before.

Lewis’ daughter Sarah was best friends with Parkinson at the time the false allegations were made.

An emotional Sarah questioned why someone so trusted in her life would lie about something so serious.

She said that people at her school falsely thought her father was a rapist for ten years.

Mr Lewis was never charged over the allegations as there was no case, but the family suffered emotional torment at the hands of Parkinson. 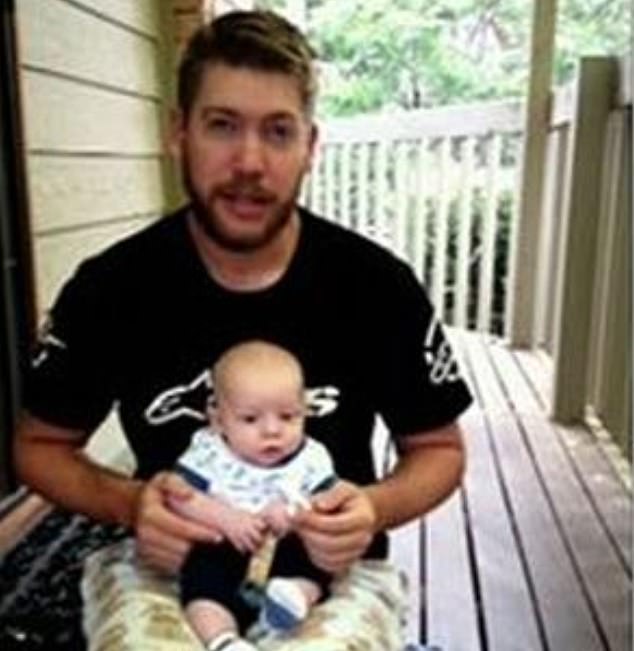 On March 21 2014, Mr Jones was arrested for raping Parkinson despite this picture proving he was somewhere else at the time of the alleged assault

‘I think she’s a lying, vindictive, cancerous human who should not be around other people at all,’ Mr Jones said.

Parkinson was jailed for three years and one month.

Her crime has also been described as a mockery of genuine domestic and sexual violence victims.

Mr Jones has now found love again, but his family said they are still struggling after spending hundreds of thousands of dollars on legal fees.

Emma Holsty, who is related to Mr Jones, said the family is attempting to recover since losing ‘hundreds of thousands of dollars’ it cost in legal fees to fight for his innocence and freedom.

‘That is before any compensation for the damage she (his ex-fiancée) caused for my cousin and his immediate family – now torn apart,’ she wrote on Facebook.

‘It really has been a six-year nightmare that will never be repaired.’ 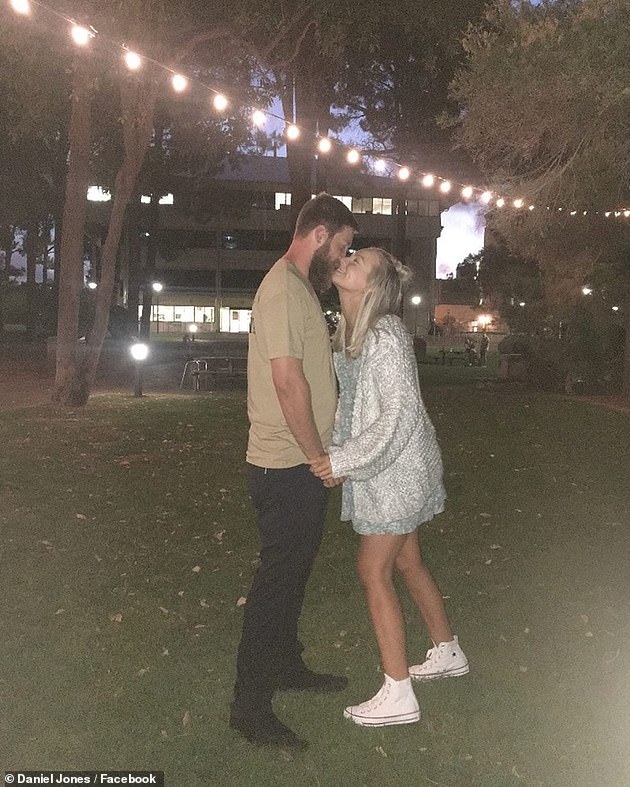 Mr Jones has now found love again, but his family say his family are still struggling after spending hundreds of thousands of dollars on legal fees

A GoFundMe page was set up to raise money for the family after they had to stump up hundreds of thousands in legal costs.

‘Last week the perpetrator of this crime, Sarah Jane Parkinson, was sent to prison for three years for false rape accusations and faking a crime scene,’ the page, posted in January says.

‘This followed five years of Parkinson’s vicious attempts to destroy Dan, her ex-fiancé, and his family, with the help of crooked cops.’

‘Her campaign led to Dan spending four months wrongly imprisoned and his parents blowing their life savings, spending over $300,000 trying to protect their son.’