How did ex-Surrey schoolgirl Misha Nonoo pull of such a crazily OTT wedding?

By any standards, it was a remarkable guest list.

There was American royalty in the shape of Donald Trump’s daughter Ivanka and her billionaire White House ‘special adviser’ husband Jared Kushner.

Next came Hollywood royalty with pop chart-topper Katy Perry on the arm of her Pirates Of The Caribbean actor fiance Orlando Bloom.

And then there was real royalty as the radiant bride rolled into her pre-wedding lunch on the back of a golf cart sitting beside a beaming Princess Eugenie, whose sister Princess Beatrice was already inside.

Who on earth is Misha Nonoo? And how did the 33-year-old (pictured with husband Michael Hess) manage to pull off what one former fashion associate quipped was ‘the greatest spectacle Rome has seen since the return of Caesar 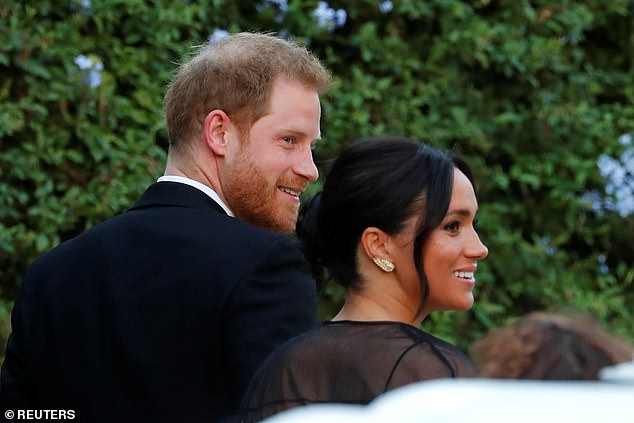 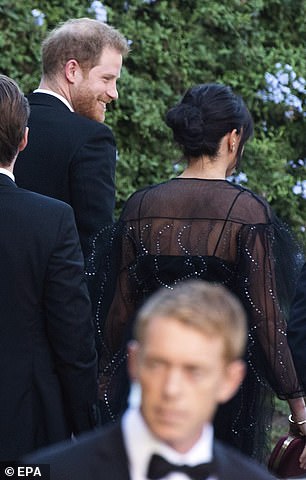 A chorus of cheers erupted as the Duke and Duchess of Sussex arrived (left and right), Prince Harry wearing black tie and Meghan pairing gold earrings with the puff-sleeve embroidered tulle gown in black. The dress, which has sequin embellishments and wraparound fastening, is made in Italy

But it was the arrival of the bride’s best friend, to audible gasps from the crowd, that proved that this was undoubtedly the wedding of the year.

As the Duchess of Sussex, wearing a stunning £9,000 sheer black Valentino gown, arrived with Prince Harry to celebrate designer Misha Nonoo’s wedding this weekend to American oil tycoon Michael Hess, it marked the crowning triumph of the remarkable social rise of the bride to the very pinnacle of society on both sides of the Atlantic.

But who on earth is Misha Nonoo? And how did a 33-year-old whose mother was born in Newcastle-upon-Tyne and who, by her own admission, was ‘struggling’ both personally and professionally just three years ago, manage to pull off what one former fashion associate quipped was ‘the greatest spectacle Rome has seen since the return of Caesar.’ 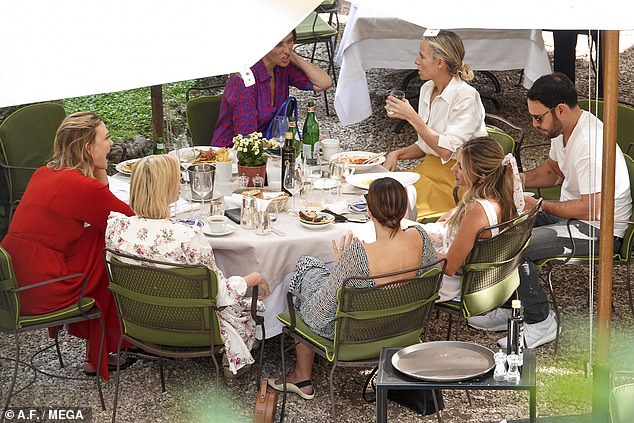 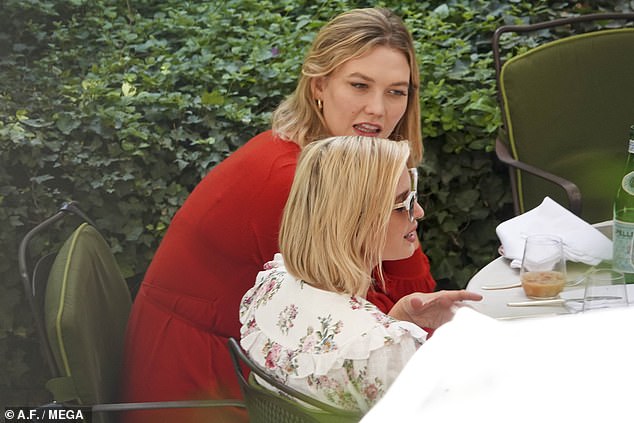 On Friday evening, Harry and Meghan, who stayed at the £1,200-a-night Hotel Vilon in Rome, joined a galaxy of A-listers and power brokers at an exclusive villa with unrivalled views of St Peter’s Basilica for the ceremony.

The guests, who also included Sir Paul McCartney and James Corden, were greeted by violinists and cellists as they arrived for the sunset ceremony in the idyllic grounds of the 17th Century Villa Aurelia.

After the ceremony, guests enjoyed an open-air drinks reception before sitting down for the wedding meal under candlelight in the gardens of the villa, protected from prying eyes by 20ft-high walls. 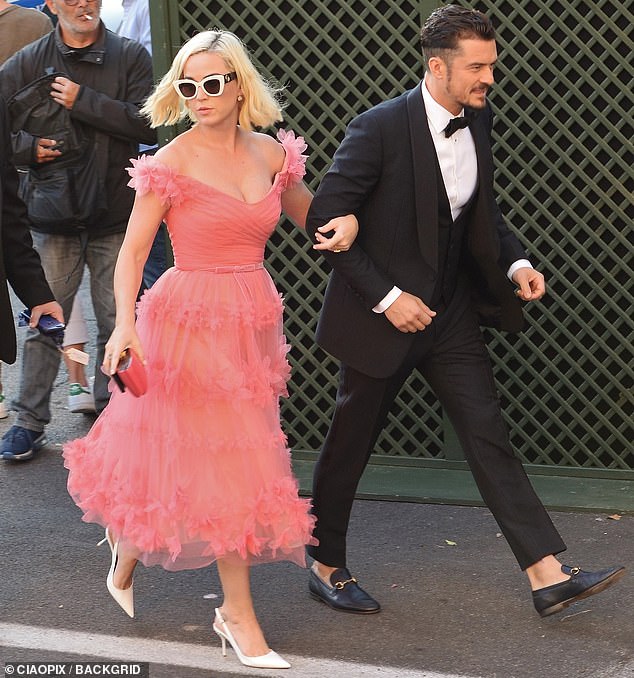 On Friday evening, Harry and Meghan, who stayed at the £1,200-a-night Hotel Vilon in Rome, joined a galaxy of A-listers and power brokers at an exclusive villa with unrivalled views of St Peter’s Basilica for the ceremony 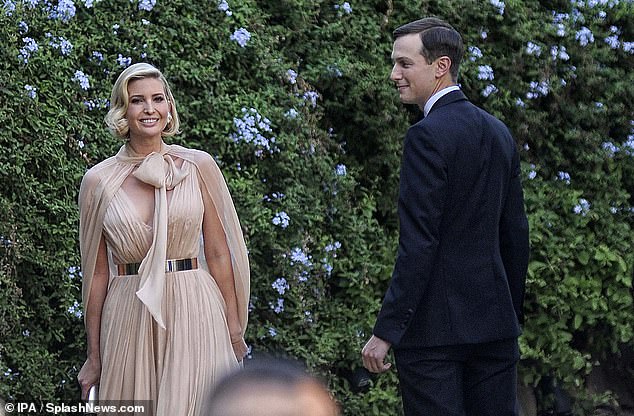 After the ceremony, guests enjoyed an open-air drinks reception before sitting down for the wedding meal under candlelight in the gardens of the villa, protected from prying eyes by 20ft-high walls

Harry and Meghan were smuggled out of a side entrance at 12.45am yesterday with security guards blocking photographers as they climbed into a people-carrier with blacked-out windows.

The couple were given the full VIP treatment by the Italians, with a police escort to Leonardo da Vinci airport and use of a special ‘ceremonial’ terminal usually reserved for visiting heads of state.

As the celebrations continued, they took a commercial British Airways flight back to Britain last night, returning home to prepare for their tour of southern Africa, which begins tomorrow. 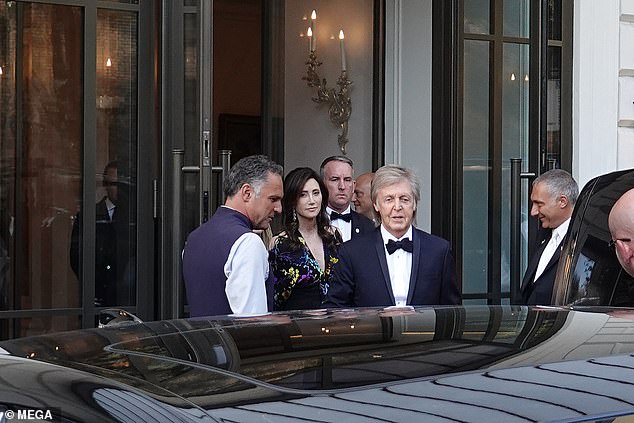 The guests, who also included Sir Paul McCartney (pictured) and James Corden, were greeted by violinists and cellists as they arrived for the sunset ceremony in the idyllic grounds of the 17th Century Villa Aurelia

The Duke and Duchess missed last night’s lavish wedding party, a La Dolce Vita-themed affair at the Cinecitta film studios where the iconic 1960 Federico Fellini classic was made. The dress-code simply stated: ‘Dazzling’.

But their presence in Rome confirmed the event as the pinnacle of Ms Nonoo’s astonishing ascent from Surrey schoolgirl to society figure, whose little black book includes friends as powerful and diverse as Facebook’s Sheryl Sandberg and Madonna.

Ms Nonoo, an ice-cool blonde who cites Grace Kelly as her fashion idol, is widely rumoured to be the woman who introduced Meghan to Prince Harry in the summer of 2016.

Her friendship with Meghan has thrust her into the spotlight and has given a huge boost to her online-only fashion collection which most outside the fashion industry had never heard of until Meghan wore one of Misha’s £175 white ‘Husband’ shirts to her first public appearance with Harry, at the Invictus Games in 2017. 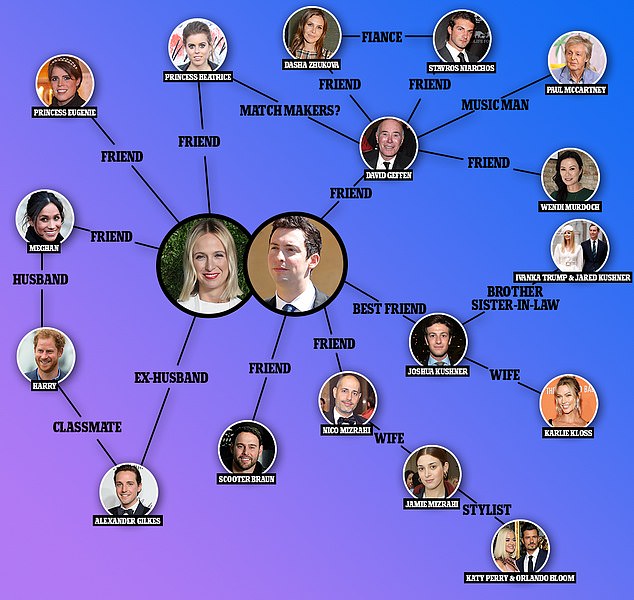 The Duchess of Sussex , 38, was seen wearing a £8,900 ($13,500) black puff-sleeve embroidered tulle gown black gown by Valentino as she arrived at the Villa Aurelia alongside Prince Harry , 35, for their friend’s wedding

But a former associate says: ‘What you are seeing now is the culmination of years of hard work and networking. Misha knows what she wants, is incredibly ambitious and is determined to get it. She’s been like that since she first arrived in New York in her early 20s.’

Born in Bahrain, her father Meir Nonoo is a Jewish-Iraqi businessman who is managing director of the Bahrain Finance Company.

It is unknown how Meir came to meet Ms Nonoo’s mother Eva Potts who was born in Newcastle and went to Walbottle Grammar School in the city, according to her Facebook page. The family moved to England when Misha was 11 and she attended the £45,000-a-year ACS International School in Cobham, Surrey. After her A-levels, she spent two years studying design at the L’ecole Superieure du Commerce Exterieur in Paris before joining a small fashion firm in New York. 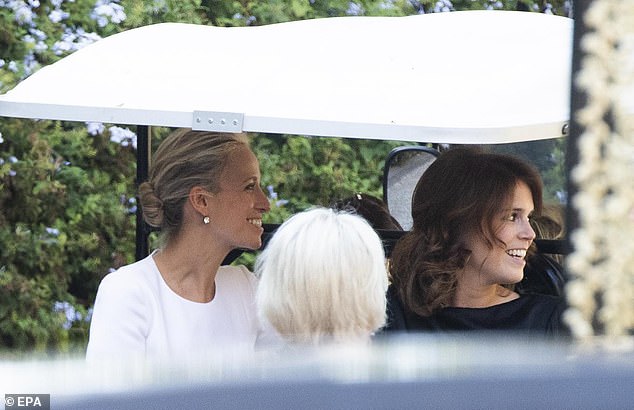 Misha Nonoo, wearing a minimal white dress, smiles alongside Princess Eugenie, wearing a black gown, as they arrive for the wedding ceremony in Rome 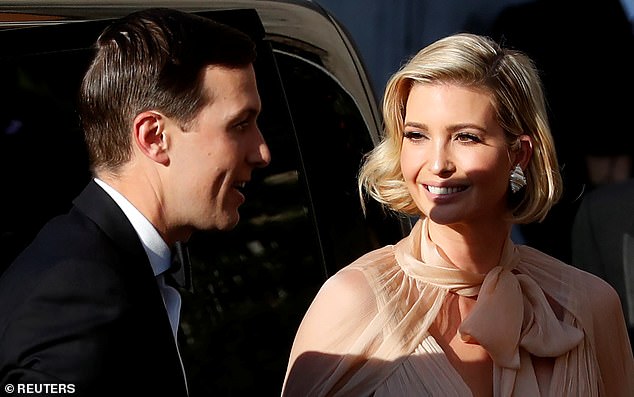 Ivanka Trump, sporting her new short hairstyle, steps out of a blacked out SUV in a gorgeous peach gown alongside her husband Jared Kushner, in Rome on Friday

In New York, helped by her cut-glass English accent and willowy figure, she began to make the social connections which were to come so spectacularly to fruition this weekend.

In 2012, she married Alexander Gilkes, the son of a Harley Street dermatologist. Mr Gilkes, who was friends with both Prince Harry and Prince William at Eton, is impeccably connected. His brother Charlie once dated the Duchess of Cambridge’s sister Pippa Middleton, and in 2013 Mr Gilkes hired Princess Eugenie to work at his New-York based auction house.

It was Ms Nonoo’s chance meeting with the then Suits actress Meghan at a lunch party at Miami’s Art Basel art fair in 2013 which was to change her life. ‘We were seated next to one another at a lunch and we got along like a house on fire,’ she recalled in an interview. ‘I love her to death. She is the coolest girl in the world. She has the most remarkable and generous spirit.’ 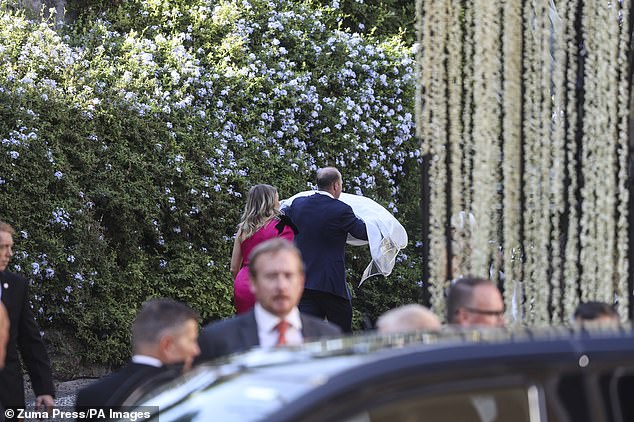 The bride’s dress is carried away as guests including Princesses Eugenie and Beatrice, Ivanka Trump, Jared Kushner and James Corden arrive for the wedding of Misha Nonoo 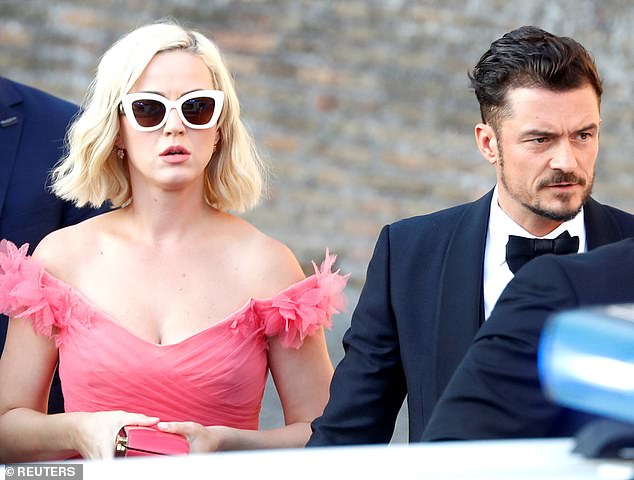 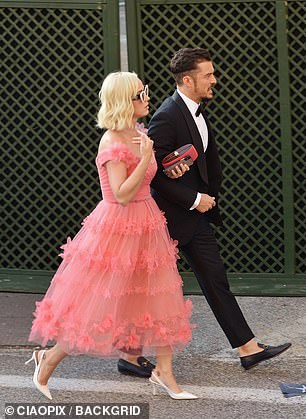 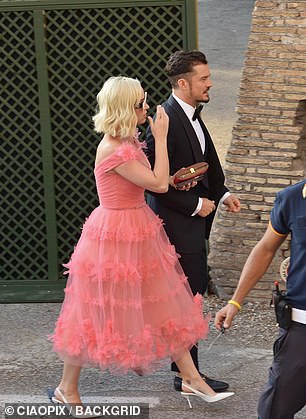 Katy Perry was a wedding guest at her fashion designer pal Misha Nonoo’s lavish Italian wedding on Friday, after enjoying a luxury shopping spree with her fiancé Orlando Bloom in the afternoon (pictured arriving at the wedding together)

Ms Nonoo and Mr Gilkes split in 2016, and that summer Ms Nonoo and Meghan took a three-week holiday in Europe which took in London, Madrid and Majorca. It is during this trip that Ms Nonoo is rumoured to have set up her old friend Prince Harry with Meghan on a blind date in the capital.

But this was also the time that Ms Nonoo, with her marriage on the rocks, found her business struggling. After taking advice from Facebook chief Sandberg, she restructured her company, taking it online-only. 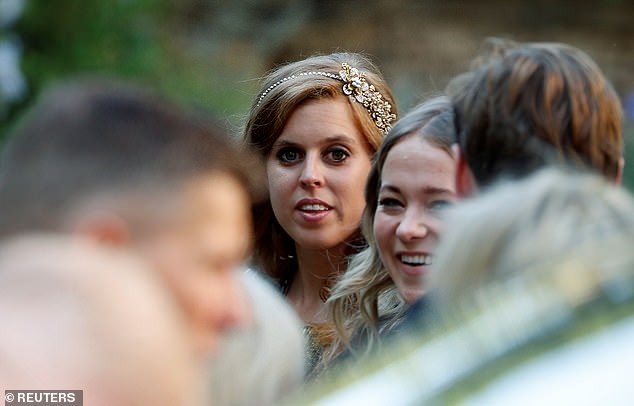 Princess Beatrice looks on as Poppy Jamie, a close friend of Suki Waterhouse, smiles in the Italian dusk on Friday evening 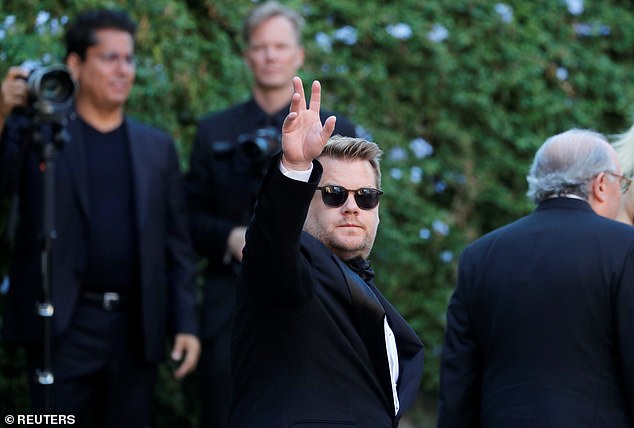 TV host James Corden, sporting a pair of shades with his black dinner jacket, waves to the press as he arrives at the wedding 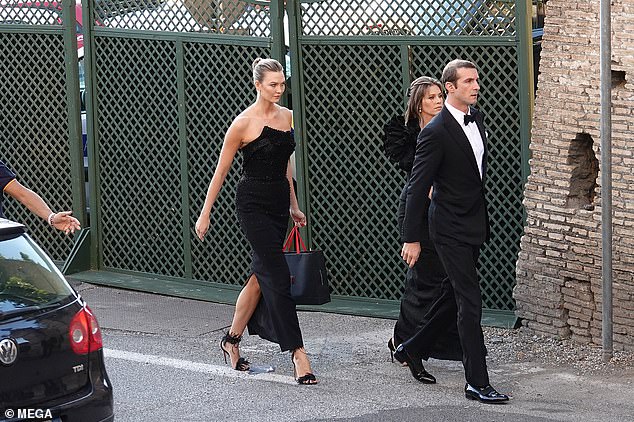 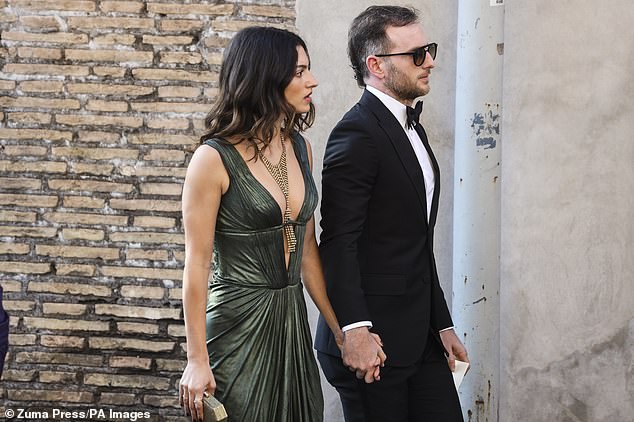 Guests arrive for the wedding of  Misha Nonoo in Rome this evening. Her partner, Michael Hess is from one of America’s wealthiest families, with grandfather Leon the founder of the multi-billion-dollar Hess Corporation

She was photographed earlier this month embracing Meghan at the launch of the Duchess’s Smart Set clothing line to benefit Smart Works, a charity which donates clothing to women entering the workplace. Ms Nonoo designed a white £125 shirt for the collection.

Her association with the Duchess – and others – has proved lucrative. Her £2.5 million Greenwich Village apartment has appeared in Architectural Digest magazine, and an Andy Warhol portrait of the Queen, a gift from her father, hangs in the library.

A source said: ‘You can’t help but admire her. She is like Meghan, supremely confident, immaculately turned out. But there is a steely drive and ambition.’