How do PSG lineup for Real Madrid now Neymar, Mbappe and Cavani have returned?

When Real Madrid visited Paris Saint-Germain in the first game of this season’s Champions League group stage, the French side were supposed to be short in attack.

Thomas Tuchel’s preferred attacking trio – Edinson Cavani, Kylian Mbappe and Neymar – were all absent and the German was forced to turn to alternative options.

In came Angel di Maria and Mauro Icardi, supported by Pablo Sarabia, and they caused havoc. PSG barely felt the absence of their main men as they ran riot, winning 3-0 in the French capital thanks to a brace from Di Maria and a goal from Thomas Meunier.

(Left to right): Angel di Maria, Edinson Cavani, Neymar, Kylian Mbappe and Mauro Icardi could all play for Paris Saint-Germain against Real Madrid in the Champions League on Tuesday night 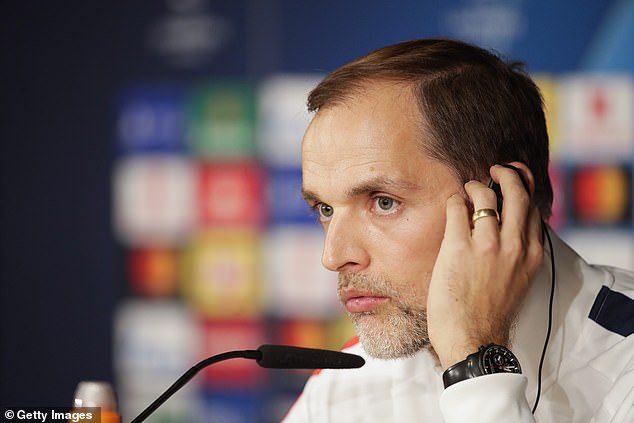 How PSG’s forwards are performing this season

Two months have passed since that night and Tuchel has a dilemma as he takes his side to the Bernabeu for the reverse fixture on Tuesday night.

Does he stick with Di Maria and Icardi, who have been so impressive for his team this season, or revert back to the big-name trio who are all available again?

Tuchel played a 4-3-3 in the first game between the sides and it is expected he will stick with the formation he has used in all but three of his team’s competitive matches this season.

That means only three of his attacking five will play, that is assuming Sarabia is definitely left out. But the Spaniard has been getting regular game time so it would be foolish to rule him out of contention entirely.

Tuchel’s headache initially stemmed from injuries to Neymar, Cavani and Mbappe. The Brazilian has not played any of his side’s Champions League group games so far, missing the first two due to suspension and the second pair with a hamstring issue.

That injury also kept him out of four Ligue 1 matches but he made his return in the win over Lille last weekend, playing 65 minutes before being withdrawn. Despite his lack of game time, Neymar has still managed four goals in six appearances.

Cavani has also seen limited game time in European games. He has managed just 18 minutes across the first four matches after his recovery from a hip injury prevented him from taking part in the opening three. 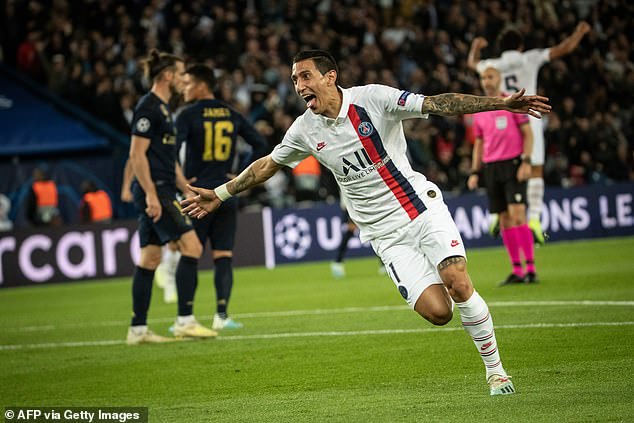 Di Maria was impressive in the reverse fixture, scoring twice as PSG ran out 3-0 winners 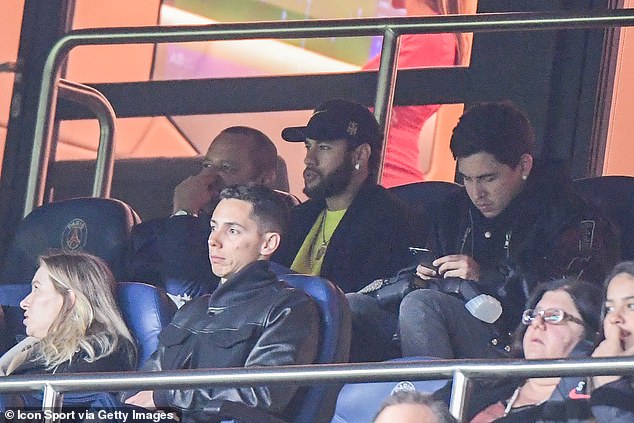 Neymar (centre) Mbappe and Cavani have spent a lot of time watching, rather than playing

The Uruguayan has been available for their last seven matches but has started just one, playing 80 minutes in the win over Brest before this month’s international break. His lack of game time indicates Icardi will probably be the central striker at the Bernabeu.

Mbappe, meanwhile, has also been in and out of the team due to a hamstring injury, thigh problems and an adductor issue. He has chalked up 12 appearances this season, scoring nine goals and providing four assists.

The 20-year-old sensation came off the bench for 25 minutes against Lille on Friday night and when he has been available Tuchel usually plays him from the start.

But in the absence of his three stars Di Maria and Icardi have absorbed the workload and led PSG to an eight-point lead at the top of Ligue 1 and through to the Champions League last-16.

Di Maria has played some part in every game this season and some would say this is the best he has played throughout his career. With nine goals and nine assists in 19 appearances, he is proving to be the difference maker in the final third. 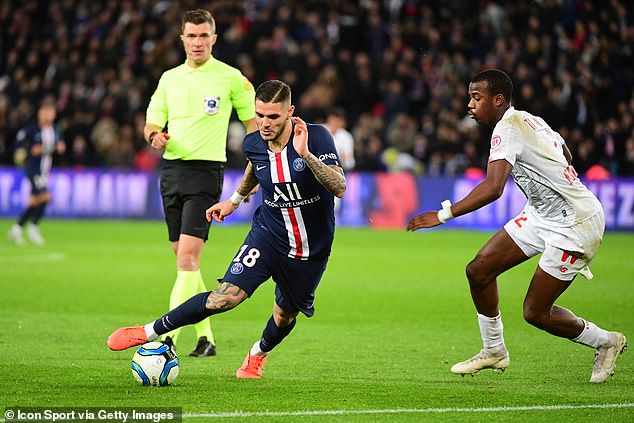 Icardi has been impressive since arriving on loan from Inter, scoring 10 goals in 11 appearances

Tuchel will also hope to squeeze every extra inch of motivation from the Argentine as he prepares to return to his former club.

Icardi, Di Maria’s partner in crime, joined PSG on a season-long loan deal from Inter Milan in September and has since scored 10 goals in 11 games. It seems he has finally put his off-field turmoil behind him.

Over the course of 12 months, Icardi was stripped of the captaincy after failing to agree a new contract, fell out with the club’s former coach, Luciano Spalletti, pulled out of Inter’s pre-season tour of Asia and was then told by supporters and the club’s CEO, Giuseppe Marotta, that he would never play for the club again.

The move to Paris has given him a new lease of life though and his performances have led to him becoming the club’s main striker. Even with Cavani back in contention over the past few weeks Icardi has held onto his place and should do so again against Real Madrid.

So, with Icardi through the middle and Mbappe looking likely to start on the right side, there seems to be one position in the front three up for grabs.

Form would hint at Di Maria getting the nod but will Tuchel really leave Neymar, the face of the club and the man they have invested so much in, looking on from the bench?

It is a brave call but, with PSG needing just a point to secure top spot in the group, it looks like Di Maria might be given the green light.