News outlets across the country were desperate for a first glimpse of the the world’s most famous drug trafficker following her deportation from Bali, Indonesia.

Schapelle managed to avoid the spotlight, but since her homecoming has shared glimpses of her life back home via her popular Instagram account. 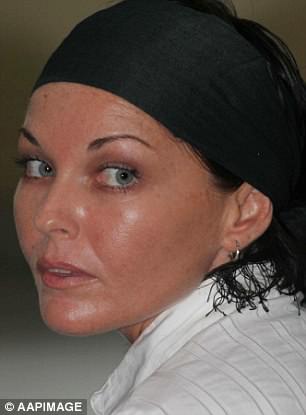 From turning 40 to getting her licence back and reuniting with her ‘soulmate’: How drug trafficker Schapelle Corby has spent her first year of freedom since being deported from Bali

As Schapelle celebrates 12 months back in Queensland, Daily Mail Australia reflects on her first year of freedom since her finishing her sentence in May 2017.

From getting her driver’s licence back to turning 40 and reuniting with her ‘soulmate’, it has certainly been an eventful year for the woman once called Australia’s ‘Ganja Queen’. 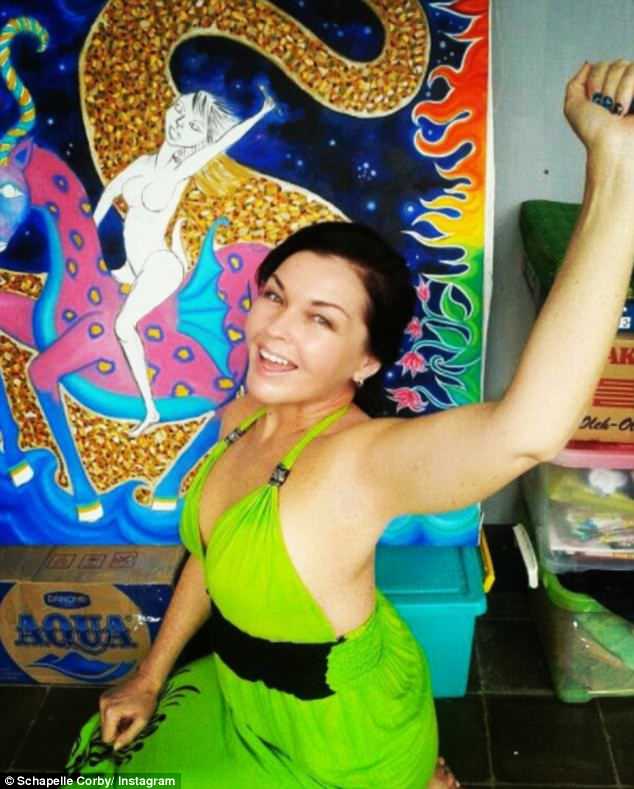 She’s almost as popular as Roxy! Shortly before starting her journey from Indonesia to Australia a year ago, Schapelle set up her own Instagram account

Shortly before starting her journey from Indonesia to Australia a year ago, Schapelle set up her own Instagram account.

Within a matter of days, her profile became one of the most followed in Australia and she achieved overnight Insta-fame.

Schapelle’s early social media posts offered fascinating glimpses of her last days in Bali and her emotional journey back to Australia. 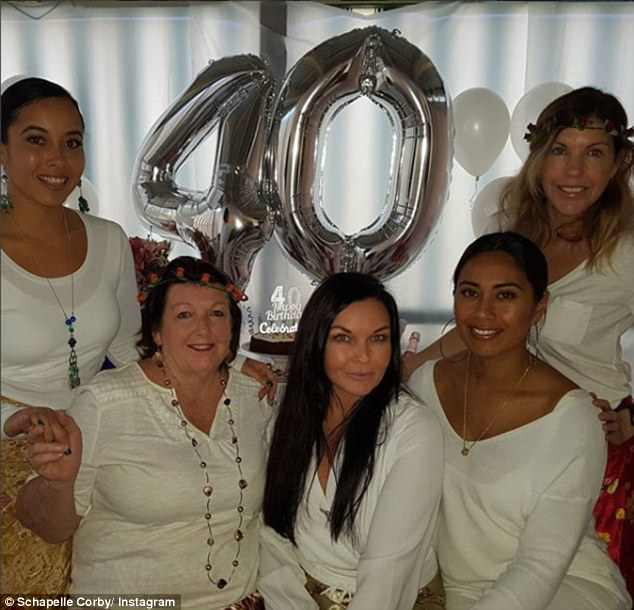 She doesn’t look a day over 27! Schapelle’s first milestone celebration following her deportation in May 2017 was her 40th birthday party in July

She shared several Instagram photos from the event at her mother Rosleigh Rose’s Brisbane home, including snaps of herself sipping champagne.

‘First birthday back on home soil after being away for 13 years,’ she wrote at the time. ‘Each year it’s been my wish to be home, finally 2017 it’s a reality.’

But Schapelle admitted she was missing her late father, Michael Corby Sr. who died in 2008, and her boyfriend Ben Panangian, who she had not seen since leaving Bali.

Getting back on the road Progress: In January 2018, Schapelle got her L-plates and was soon back on the road. (Her driver’s licence had expired while serving her prison sentence in Bali)

In January 2018, however, she got her L-plates and was soon back on the road.

‘If your driver’s licence has expired for more than five years in Queensland, then you have to do the written test and a driving test.

‘I just passed both! I’m so excited to have my independence.’

The reason why Schapelle took so long to get her licence back was because she broke her leg soon after returning to Australia the previous year. 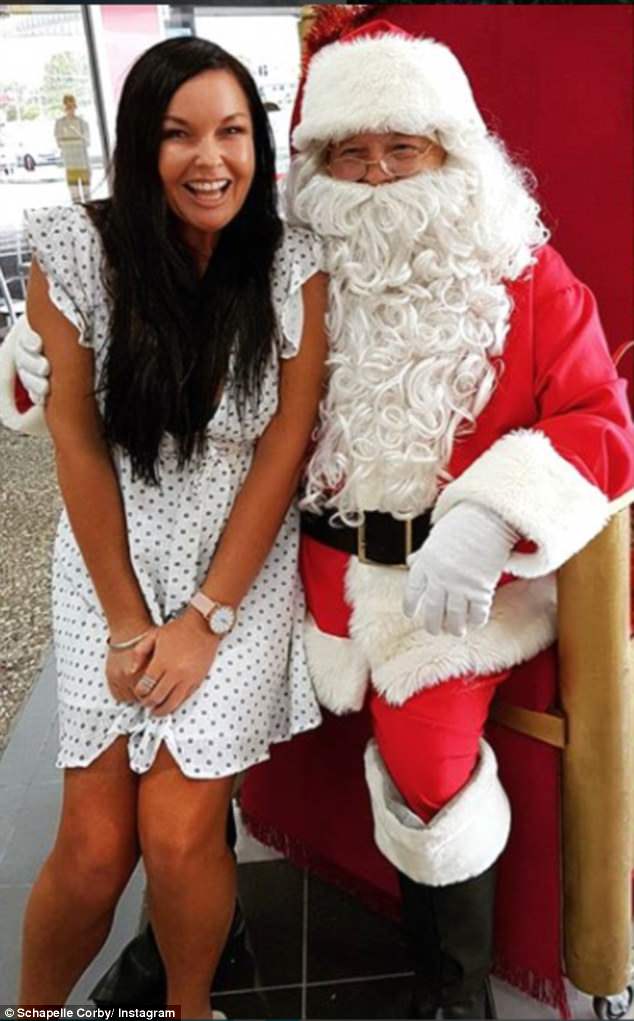 For 10 years, from 2004 to 2013, she was forced to spend the festive season behind bars in Bali’s most notorious prison.

Her Christmases on parole would have been better by comparison, but bittersweet nonetheless being so far from friends and family.

She took to Instagram throughout the holidays to share photos of herself decorating the tree, feasting on seafood with her family and even sitting on Santa’s lap.

Reuniting with her soulmate 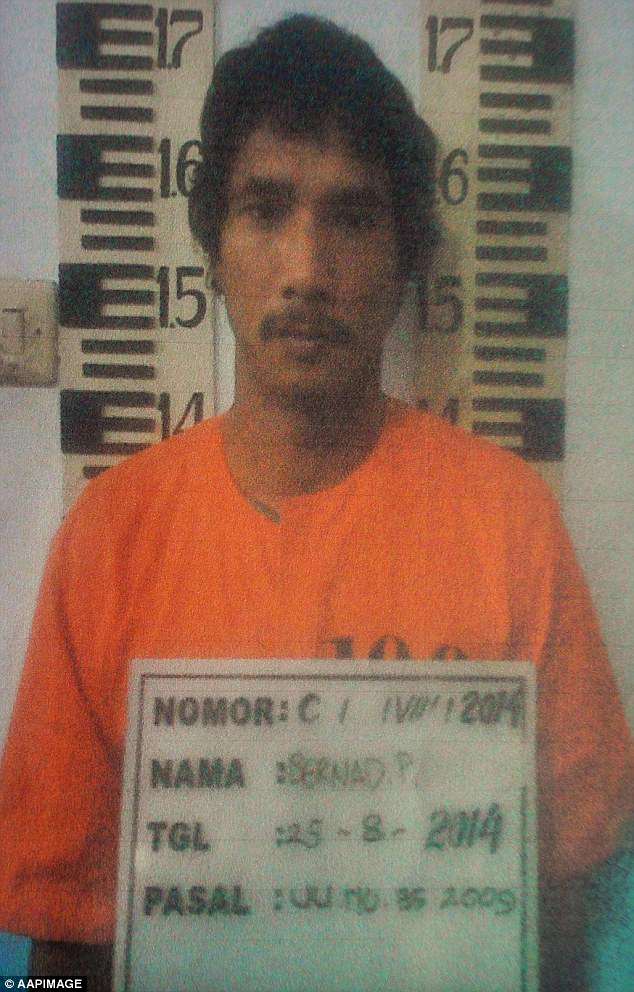 They’re back together! On Monday, Woman’s Day reported that Schapelle had reunited with her long-term boyfriend Ben Panangian (pictured) in Southeast Asia

On Monday, Woman’s Day reported that Schapelle had reunited with her long-term boyfriend Ben Panangian in Southeast Asia.

They met up in Singapore – a country with some of the strictest drug laws in the world – before heading to a beach resort in Vietnam for a two-week holiday.

An Australian tourist staying at My Khe Beach, near Da Nang, said: ‘She seemed so happy, and wherever she was he was by her side. It was actually really nice to see.

‘If I hadn’t realised who she was, I would’ve just thought they were a couple of young honeymooners. He seemed to dote on her.’ 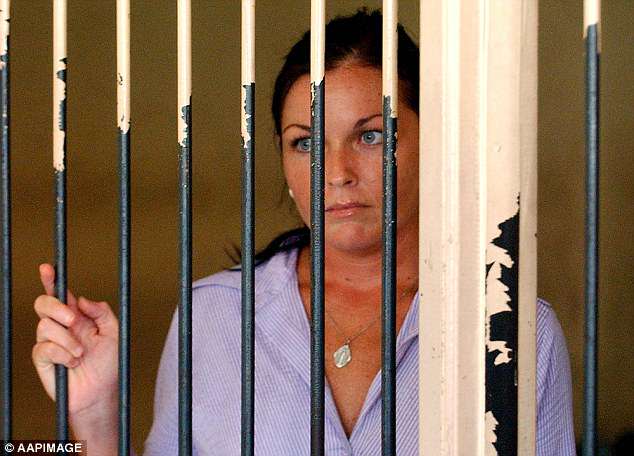 Love in a hopeless place: Schapelle and Ben met in Kerobokan Prison in 2006 while both serving sentences for drug-related crimes. She has previously described Ben as her ‘soulmate’

Schapelle and Ben met in Kerobokan Prison in 2006 while both serving sentences for drug-related crimes. She has previously described Ben as her ‘soulmate’.

It was previously speculated that the couple would never be reunited, as he would not be allowed in to Australia because of his criminal history.

Likewise, Schapelle is unlikely to be allowed back into Indonesia after her thwarted attempt to import 4.1kg of marijuana via Bali’s Ngurah Rai Airport in October 2004.

In early January, Schapelle made a surprising foray into dance music.

She released her debut digital single Palm Trees ft. Nat Z and it later enjoyed some radio airplay and was featured in several TV news bulletins.

The song was a mash-up of an electronic track and one of Schapelle’s a capella  performances on Instagram.

She has yet to release a sophomore effort. 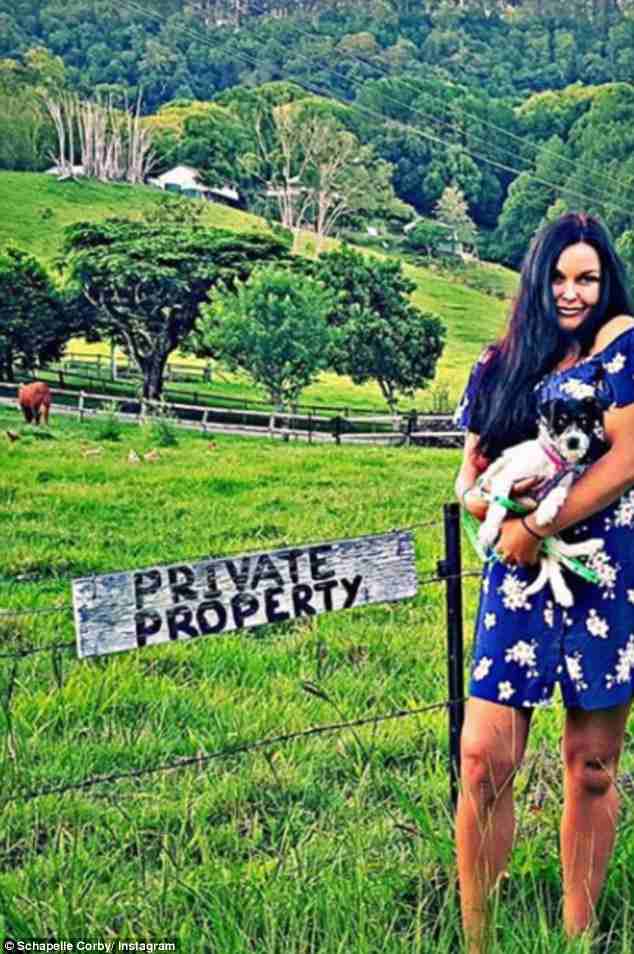 Puppy love! Schapelle has enjoyed the company of her pet dog Lucille since returning to Queensland

Schapelle has enjoyed the company of a four-legged friend since returning to Queensland.

Before Christmas, she became the proud owner of her pet puppy, Lucille.

What the future holds 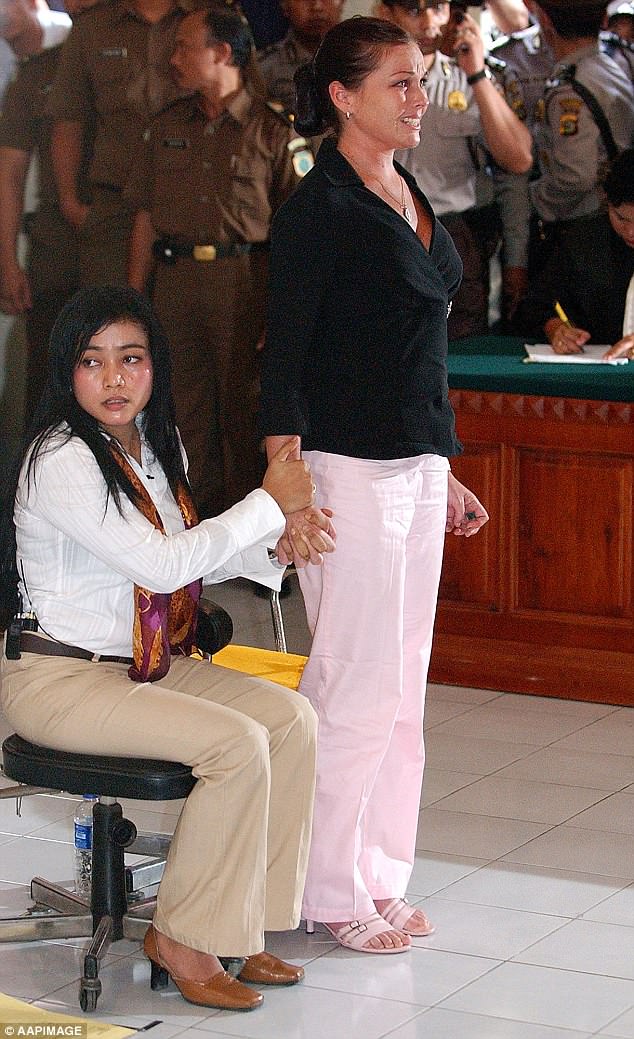 After being arrested at Bali’s Ngurah Rai Airport in 2004, Schapelle was sentenced to 20 years for drug trafficking – but ended up serving less than a decade after receiving sentence cuts

After being arrested at Bali Airport in 2004, Schapelle was sentenced to 20 years – but ended up serving only nine years after receiving sentence cuts.

She was released on parole in February 2014 and subsequently allowed to return to Australia in May 2017.

In July, Schapelle will turn 41 and it appears the public’s interest in her personal life isn’t going away any time soon.

Her reunion with Ben Panangian appears to put the kibosh on industry rumours that she will be appearing on Married At First Sight.

However, the opportunity for a tell-all television interview is still a possibility. 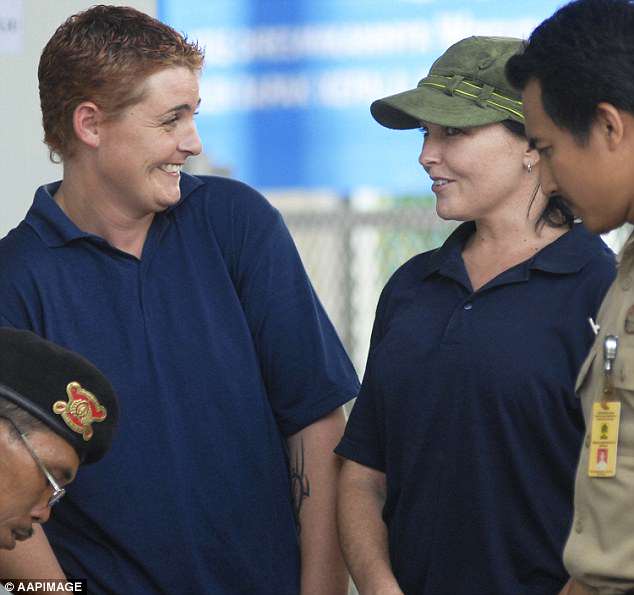 Frenemies? Meanwhile, Schapelle could soon be reuniting with her old W-Block cellmate Renae Lawrence, who is expected to return to Australia later this year

Meanwhile, Schapelle could soon be reuniting with her old W-Block cellmate Renae Lawrence, who is expected to return to Australia later this year.

Renae, who was sentenced to 20 years for her role in the 2005 Bali Nine heroin trafficking plot, had a rather strained friendship with Schapelle behind bars.

After a series of twice-annual sentence cuts, the 40-year-old former panel beater will be freed and deported by the end of 2018. 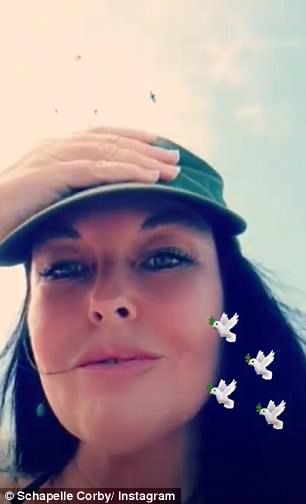 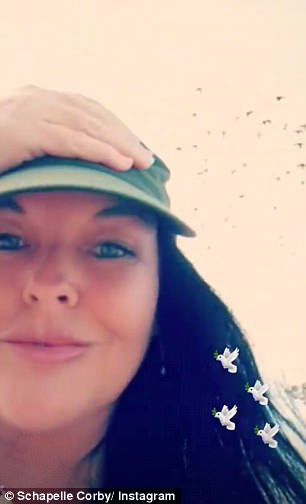 Free as a bird! On Monday, Schapelle shared a video to her Instagram Story of a flock of birds flying in the sky as a tribute to her 12 months of freedom in Australia