The organisers of the eco protests which have brought chaos to London plotted their campaign in a small Cotswold market town which has become known as ‘Hippy Central.’

Four key players behind Extinction Rebellion (XR) come from Stroud in Gloucestershire, and they were regularly joined by activists from all over the country in a small vegetarian café where they plotted the mayhem.

Co-founders Dr Gail Bradbrook and her partner Simon Bramwell, 46, live there – and, nearby, two of the first to be arrested for damaging the Shell building, Jane Augsburger and Katerina Hasapopolous, have had homes on the same street.

Dr Gail Bradbrook, a co-founder of Extinction Rebellion, is pictured this morning at the protest on Waterloo Bridge in London 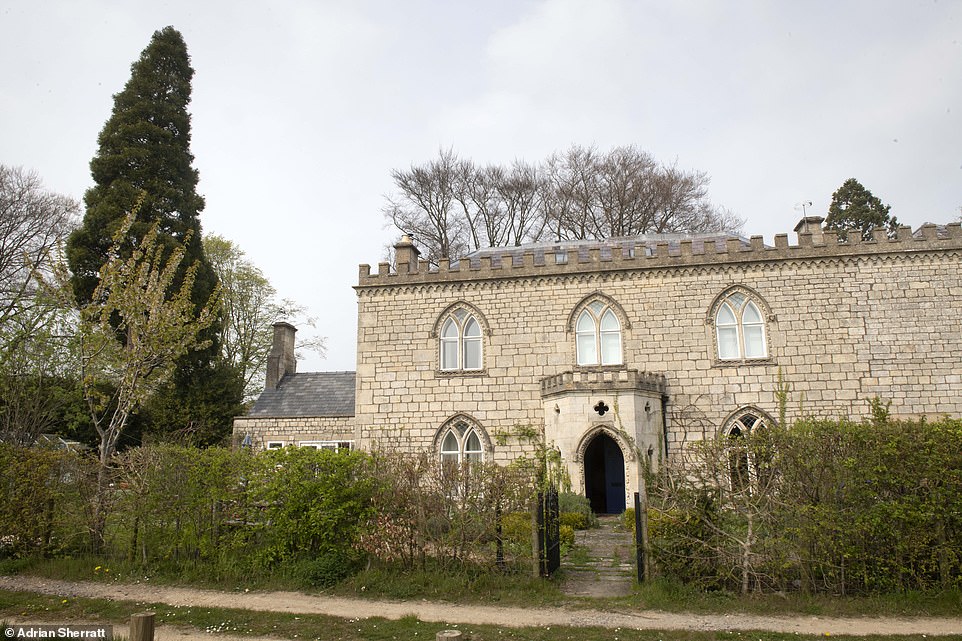 They were joined by other protesters in the Star Anise café in the town centre in the weeks before they launched the campaign to plan their civil disobedience.

‘They would often come in here and we would see Dr Gail,’ said Azra Sangster who works in the café where leaflets warning of ‘Ecocide’ adorn the walls.

‘They are all very nice and there is a big movement in the town over the awareness of climate change and what is happening to our Earth.’

Stroud is one of the ‘greenest’ towns in the country with its town council and district councillors fully signed up to tackling climate change and hoping it is ‘carbon neutral’ by 2030.

Many New Age supporters and other allied groups have moved into Stroud. 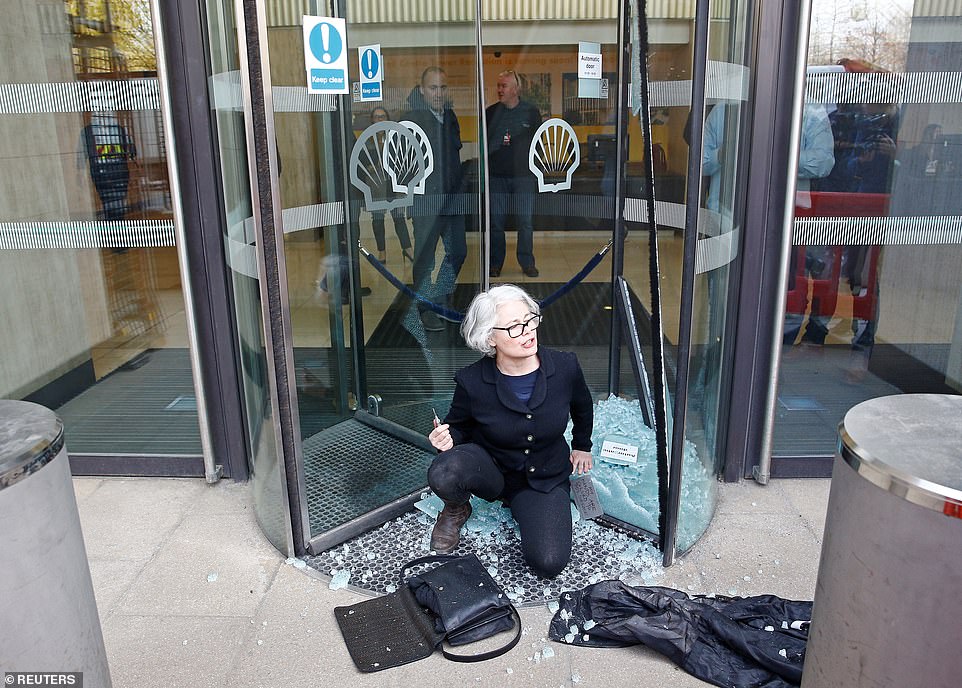 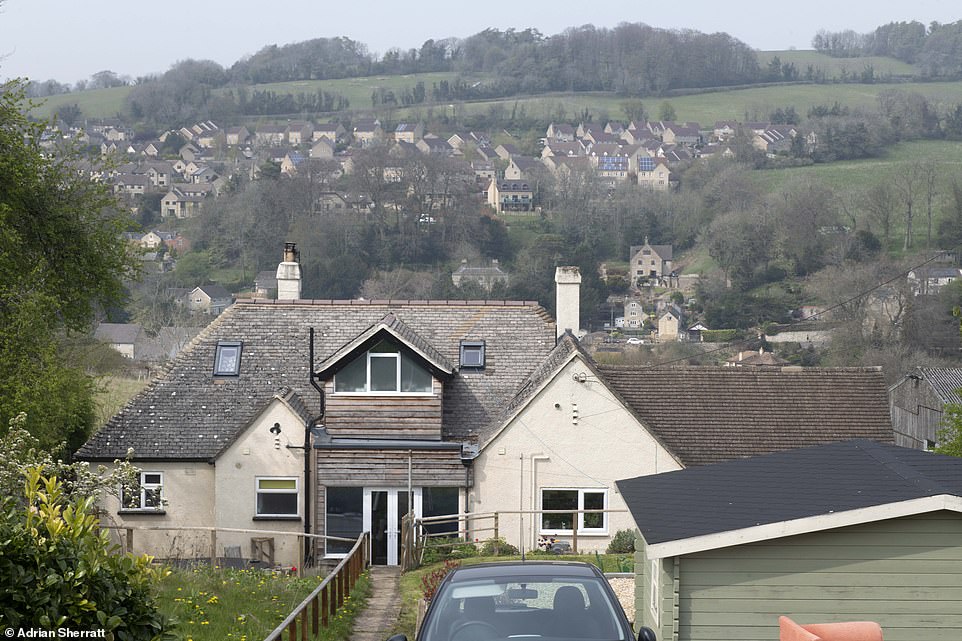 The home in Stroud of Jane Augsburger, who was arrested for criminal damage outside Shell’s headquarters on Monday

One resident said: ‘If Stroud had a theme tune it would have to be ‘Shiny Happy People’ by REM. 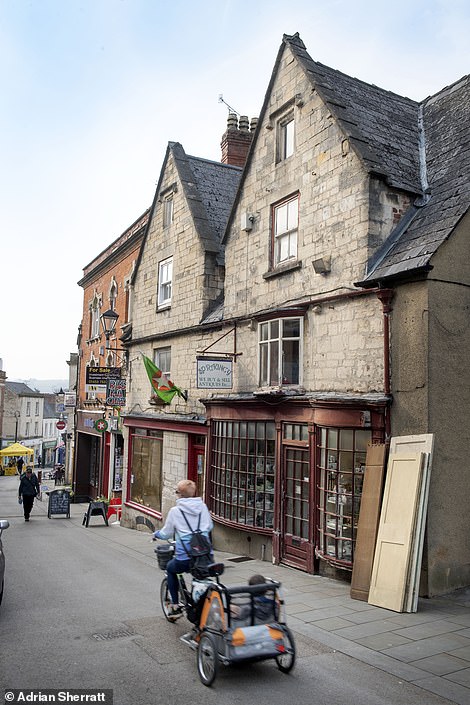 Dr Bradbrook, 47, who has been described as the Godmother of XR, has lived in Stroud since 2006, having set up home in a Grade II-listed cottage with her husband a former RAF fighter pilot John Fisher.

But the marriage ended when the committed climate change warrior left the £400,000 home after returning from Costa Rica having taking a psychedelic drug which she said re-wired her brain and gave her the codes for ‘social change.’

Mr Fisher still lives in the cottage overlooking playing fields on the edge of the town and the couple share custody of their two young boys. He is looking after them while his ex-wife is leading protests in London.

Since the split, she lives in rented accommodation in the town with her partner former builder Bramwell, who also often stays at his 80-year-old mother’s home.

He was photographed being led away by police after his arrest outside The Shell building on Monday.

His mother Sheila said while she supported his demonstration and arrest, she wasn’t too happy about the disruption to public transport when activists climbed on the roof of a Docklands Light Railway train, causing huge disruption to commuters.

‘That was a bit self-defeating and I did not agree with that. The point of the demonstration was to get cars off the road and people to use public transport. If that can’t run what is the point.’ 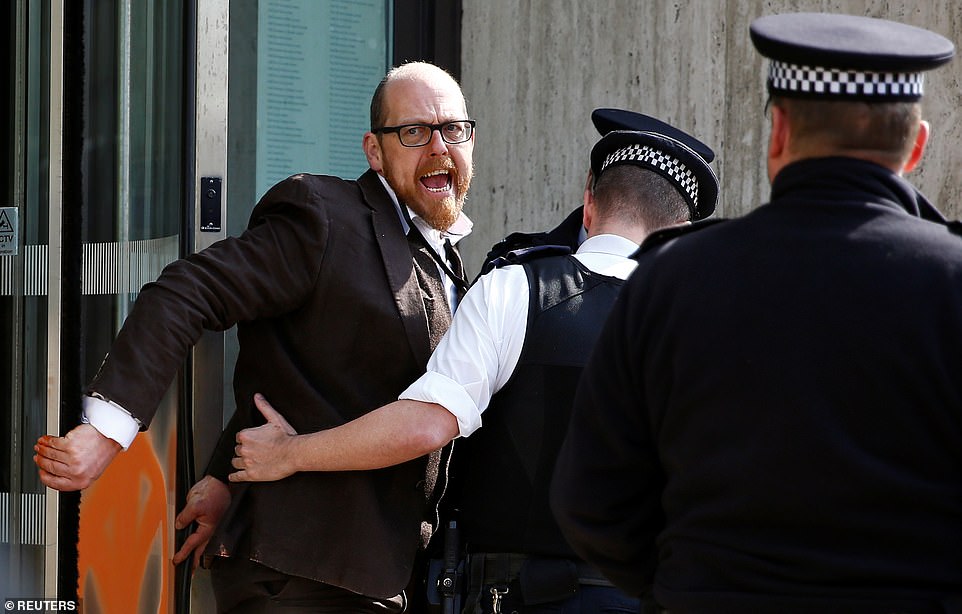 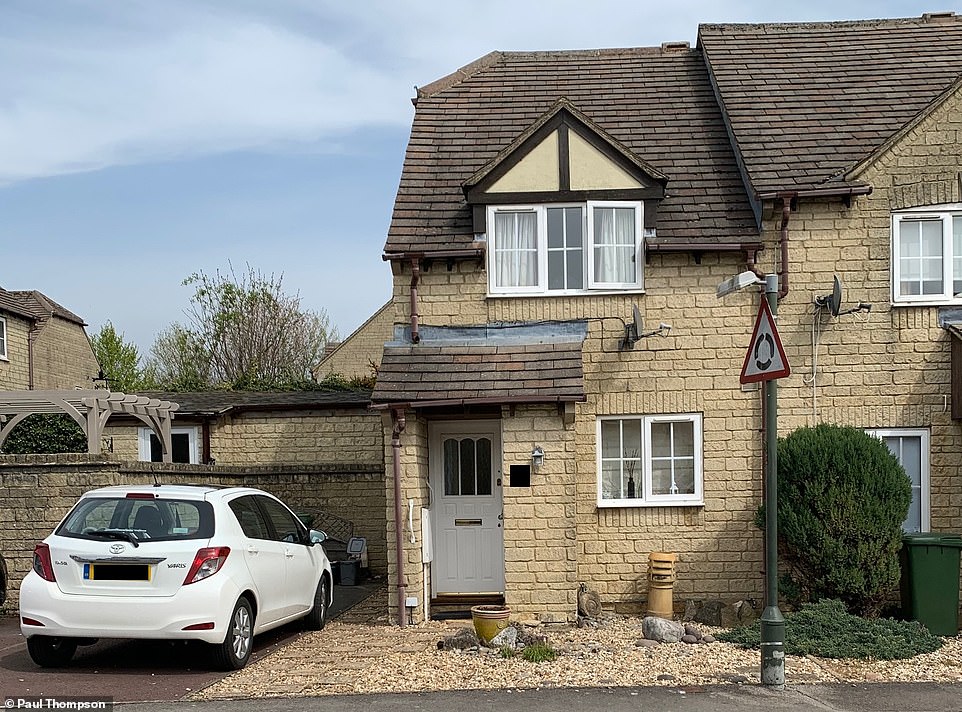 Bramwell, who was arrested earlier this week, often stays at his 80-year-old mother’s home in Stroud, Gloucestershire

Dr Bradbrook has been involved in other activists groups in Stroud and two years ago stripped to her underwear to protest the installation of an incinerator in town, which is about 90 miles from London.

She told MailOnline that her own green credentials were not the best as she drives a diesel car and added: ‘No one is perfect.’ 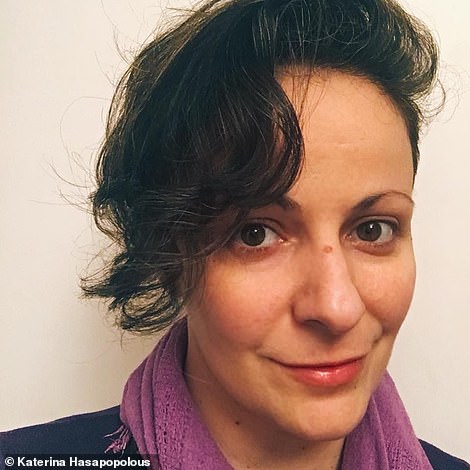 Katerina Hasapopolous has also been involved in the protests

She said the car was vital to get around in the rural community where she lives with her partner and two children.

‘I would like an electric car but I could not afford one. I am not perfect, I know that. But something has to be done or we are all ‘f***ed.’

She would have approved of the actions of near neighbour Jane Augsburger who was arrested for criminal damage outside Shell’s headquarters on Monday.

The 54-year-old mum lives in a cottage that overlooks a farm and open fields although the front of her property is hardly in keeping with her green beliefs with an old mattress and sofa dumped on a front patio area.

Katerina Hasapopoulous, a 40-year-old mother of three who was also arrested at the Shell building, lived in the same street but has recently moved.

Like her near neighbour Augsburger, who once owned a home in the Dordogne, she is an active member of the group in Stroud. 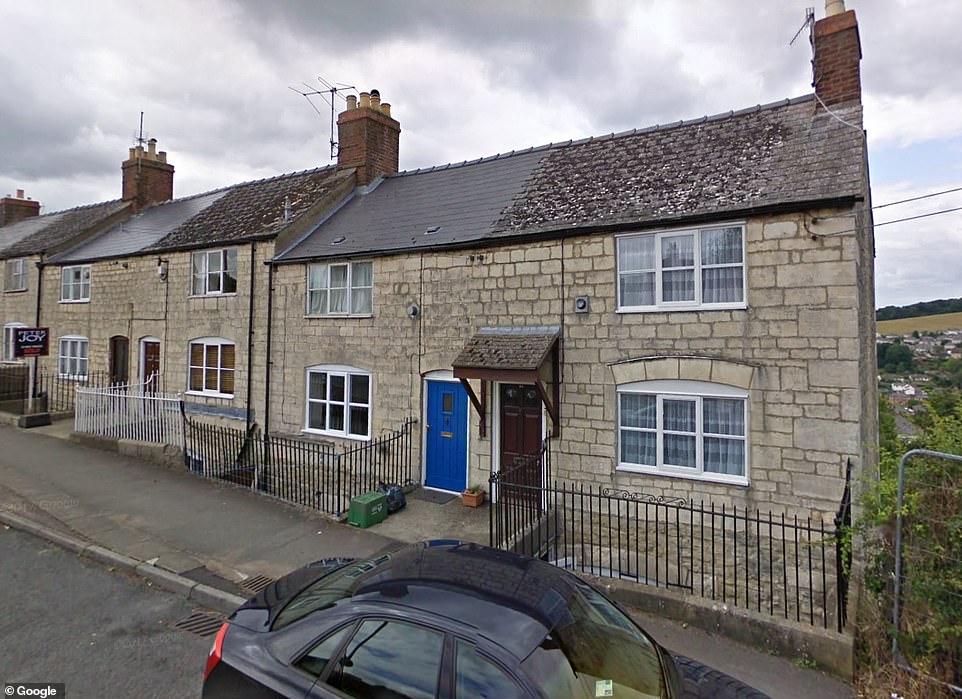 The fact that leaders of the Extinction Rebellion chose to make Stroud their home comes as no surprise to the leader of the Green Party on the district council.

He said he was proud they chose Stroud and to show his support joined the protestors for an overnight stay on Waterloo Bridge.

‘We are the only carbon neutral district council in Europe and that is something to be very proud of.

A recent Sunday Times Guide to the best places to live in Britain described Stroud as ‘left-leaning both politically and spiritually, and happily catering for everyone from hippies to high-net-worthers.’ 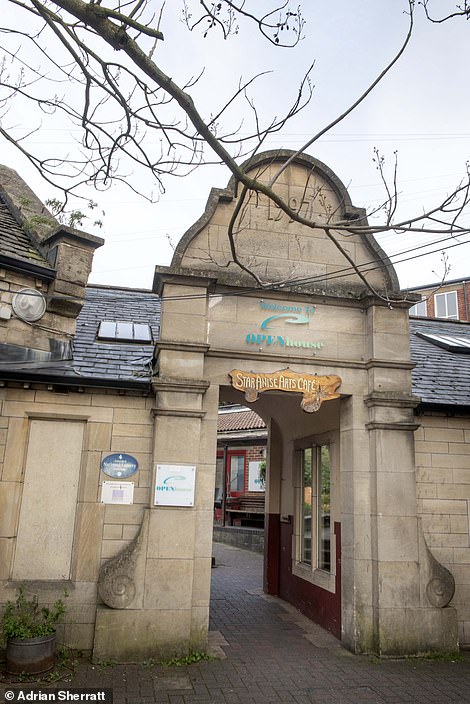 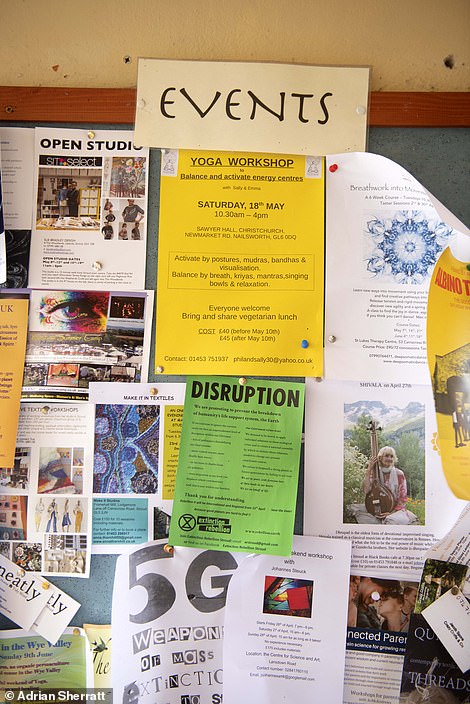 The protesters joined together in the Star Anise café (left) in the town centre in the weeks before they launched the campaign to plan their civil disobedience. Leaflets warning of ‘Ecocide’ adorn the walls of the café (right)

Stroud is also home to the only vegan football team in the English Football League, Forest Green Rovers.

Dale Vince, a millionaire businessman who made his fortune supplying green energy to the National Grid, runs the League Two team. 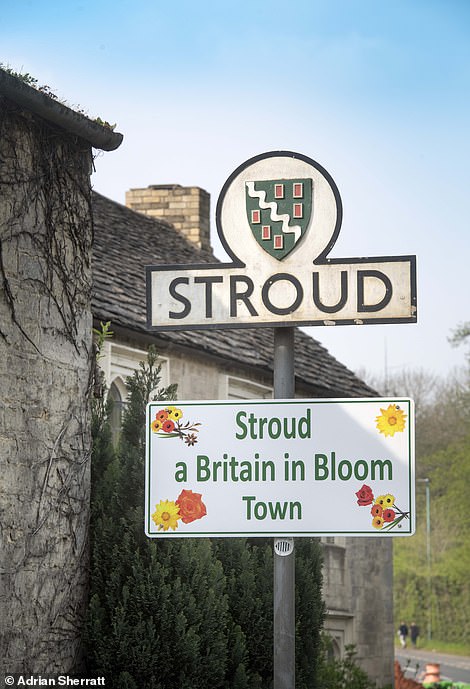 A recent Sunday Times Guide described Stroud as ‘left-leaning both politically and spiritually, and happily catering for everyone from hippies to high-net-worthers’

They became the first side to ban meat and even cow’s milk from their stadium. Not surprisingly Dr Bradbrook and her two sons are supporters of the team based in Nailsworth.

Another attraction for activists seeking a home in the Cotswolds is that Stroud, unlike some of its near neighbours, is still fairly affordable.

Local residents were supportive of the action taken by Dr Bradbrook and others, but pleased the demonstration was causing chaos 100 miles away in London and not their town.

‘It would be a catastrophe if our business was affected like those in London,’ said one worker in a phone shop.

‘Something has to be done about climate change, but I do feel sorry for those businesses who have lost out. They are hardly going to be supportive of the cause when they are massively out of pocket.’

Dr Bradbrook, who holds a PhD in molecular biophysics and has studied in France and India, acknowledged she was probably the most hated woman in London for causing days of chaos for commuters and drivers.

‘I have to apologise to those people who have been affected, but civil disobedience on this scale is the only way the Government will take notice.

‘We cannot just sit back and do nothing as we are running out of time. Our species will be extinct if we do not do something. It is no good the Government saying they will be reduce emissions by 2,050. It will be too late then.’ 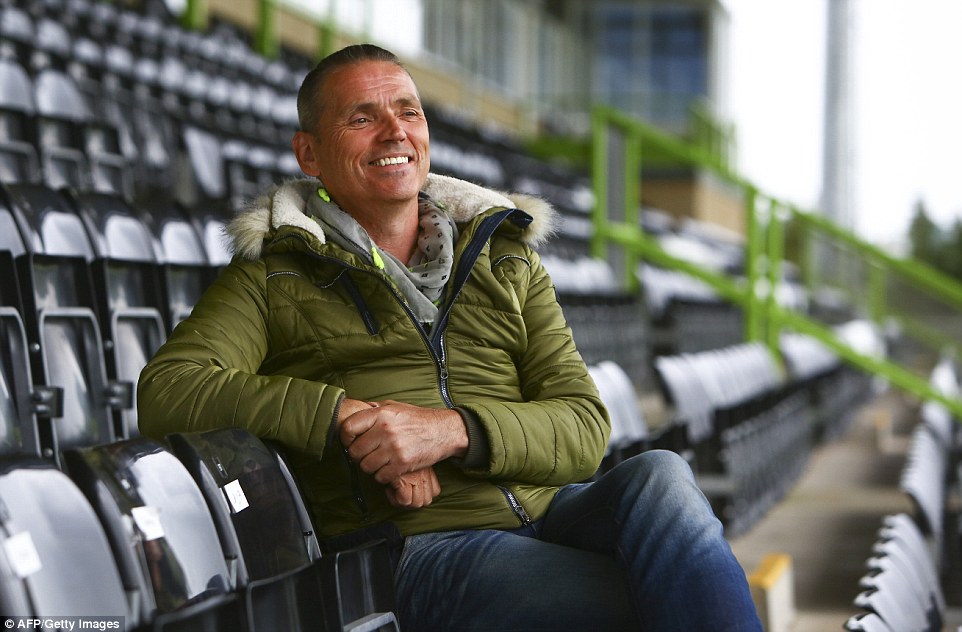 Stroud is home to the only vegan football team in the English Football League, Forest Green Rovers. Dale Vince, a millionaire businessman who made his fortune supplying green energy to the National Grid, runs the League Two team

She said she was separated from the father of her two children, aged 10 and 13, and he was caring for them while she was in London.

‘We are separated and although he supports what we are trying to achieve we are not necessarily on the same page.’

Dr Bradbrook said she grew up in South Yorkshire where her father was a coal miner.

In 2015 she formed an activist group called Compassionate Revolution and this later became Extinction Rebellion.

Dr Bradbrook said she became more involved in activism after flying to Costa Rica to take a psychedelic compound known as iboga which is derived from a west African tree bark.