How ethical is your favourite fashion brand?

An ethical fashion app will tell you about the human and environmental impact of your fashion choices with just a few taps on your smartphone.

The Good On You app, set up by Australian former lawyer Gordon Renouf has now expanded to the UK and features data on more than 2,000 fashion brands including some of the high street’s biggest names.

It ranks brands on three categories – people, planet and animals – and gives ratings out of five based on independent sources such as Fair Trade, OEKO-TEX and the Global Organic Textile Standard, as well was information published by the brands themselves.

British high street giant M&S receives one of the app’s highest ratings and ranks ‘good’ at four out of five, thanks to its ‘strong environmental and labour policies’.

The score is given to retailers known for transparency, who ‘have taken several significant positive initiatives’ and are ‘leaders on one or more key issues’.

However, online giant Boohoo received a ‘not good enough’ ranking at two out of five because it doesn’t communicate enough information about its environmental policies.

But how does your favourite high street brand stack up?

M&S has set some strong environmental and labour policies.

It is a Carbon Trust certified brand and uses a proportion of eco-friendly materials including recycled fabric and wool that complies with the Responsible Wool Standard.

It has set a deadline for the elimination of hazardous chemicals by 2020 and has a policy to eliminate environmental pollution from use of chromium and other chemicals in its leather tanning process.

Its animal rating is given an ‘it’s a start’ by Good on You as it uses leather and down without stating sources.

BOOHOO: NOT GOOD ENOUGH – TWO OUT OF FIVE

Boohoo does not communicate sufficient information about its environmental policies.

Boohoo’s rating by the app is low because it doesn’t ‘publish sufficient relevant information about its environmental policies to give a higher rating’.

When it comes to labour, it does not report ‘whether it pays a living wage at any stage of the supply chain’ and there is no evidence of listing countries for any of its suppliers’.

On the upside, it doesn’t use fur, down or exotic animal skin or angora. 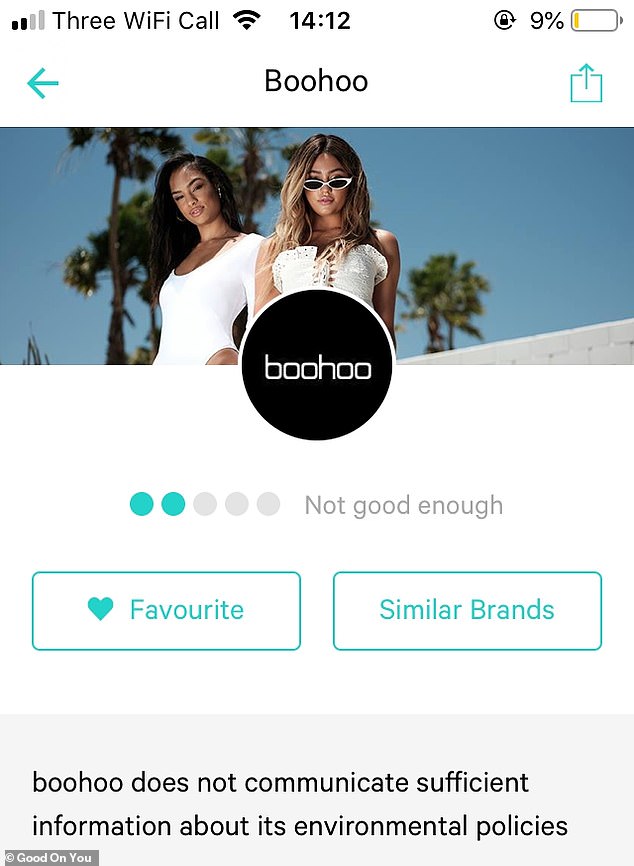 Boohoo received a low ranking as it doesn’t give enough information about how it’s working to protect the environment, and its production of fast fashion items

ZARA: IT’S A START – THREE OUT OF FIVE

The brand has set some good policies for supply chain management but it creates short-lived fast fashion products.

It uses the GHG Protocol to guide measurement and reporting on its carbon emissions and has made a public commitment to reduce its direct and indirect carbon emissions by 15 per cent based on 2005 levels by 2020.

Its labour ratings are good based on the 2018 Ethical Fashion Report. This looks at criteria, including payment of a living wage, transparency and worker empowerment. 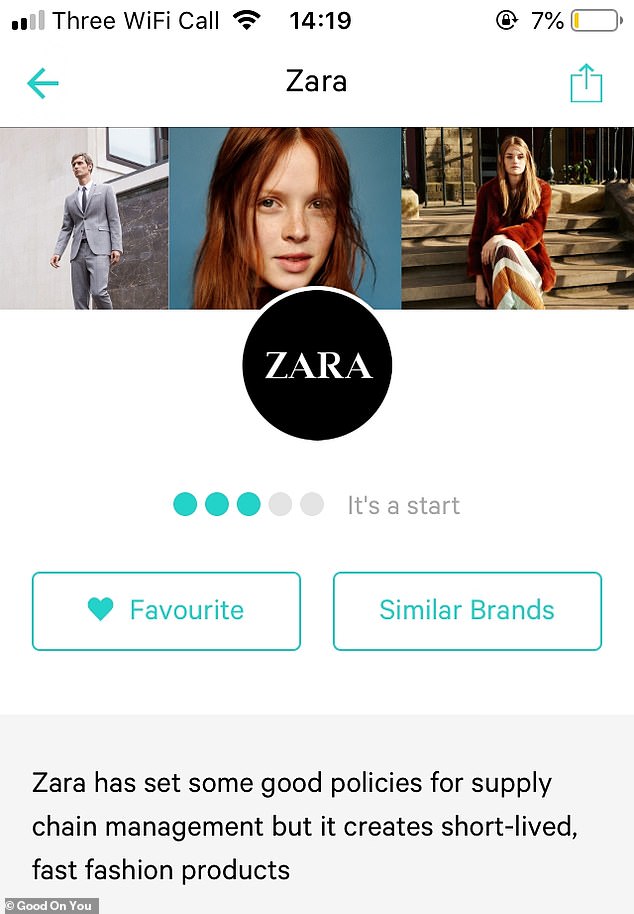 RIVER ISLAND: NOT GOOD ENOUGH – TWO OUT OF FIVE

River Island does not communicate sufficient information about its environmental policies.

As well as being rated ‘very poor’ by the app for not providing enough public information about its environmental policies, it’s also criticised for sourcing labour from countries with ‘high or extreme risk of labour abuse’.

Good on You also criticises River Island for using down, cashmere, leather, wool and mohair without stating sources. 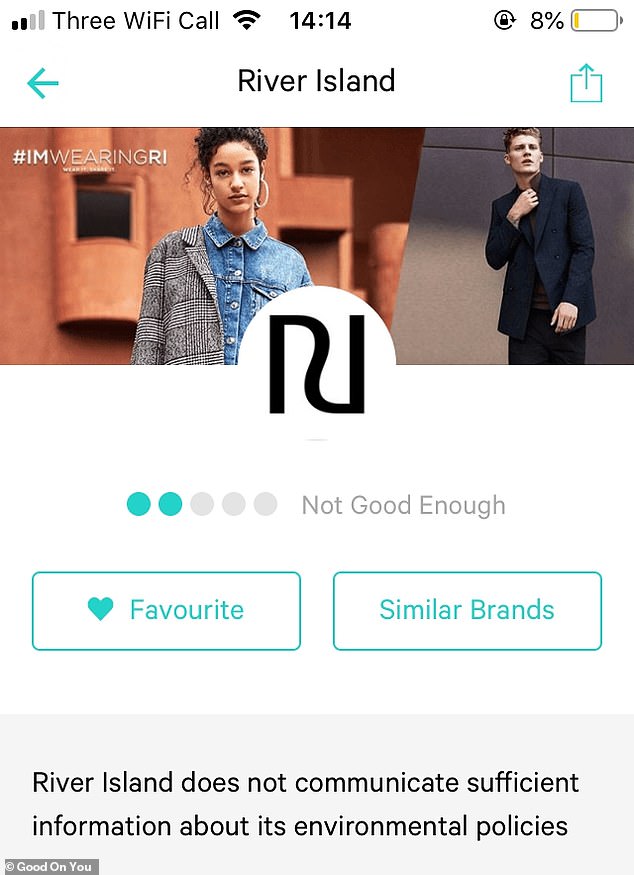 L.K. BENNETT : NOT GOOD ENOUGH – TWO OUT OF FIVE

L.K. Bennett does not communicate sufficient information about its environmental policies.

According to the app, there is no evidence the store provides a living wage for its workers . It races suppliers in its supply chain, but it is unclear to what extent.

It’s also been criticised for not being transparent about its environmental policies. 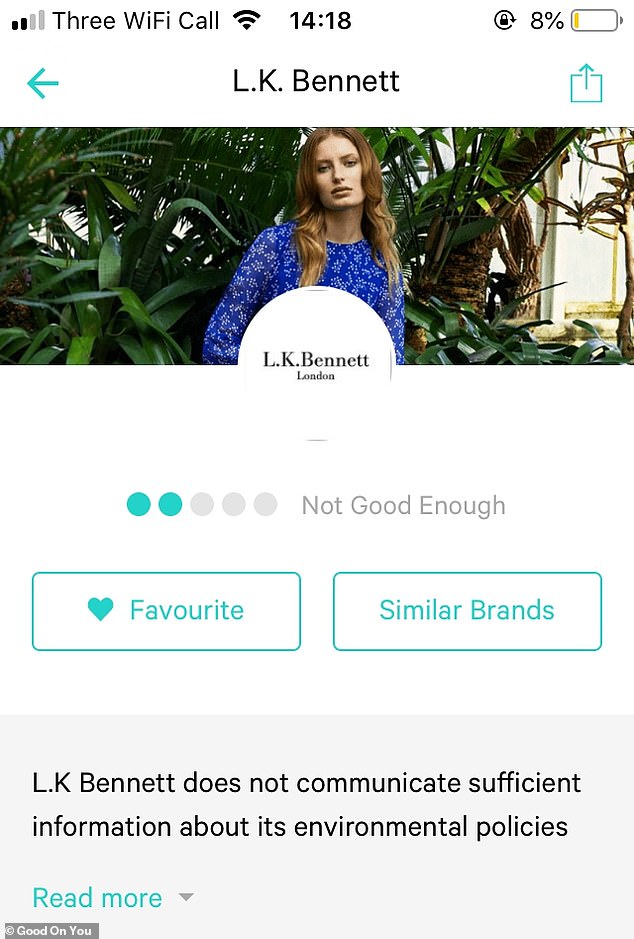 L.K. Bennett received a lower rating for not being transparent about its environmental policies and even scored lower than Primark

It has fast fashin traits such as on trend styles and regular new arrivals. There is no evidence of a current greenhouse gas emmissions reduction target.

However, it’s a member of the Ethical Trading Initiative and is a signatory to the Bangladesh Building and Fire Safety Accord, It does not disclose whether it pays a living wage at any stage of the supply chain. 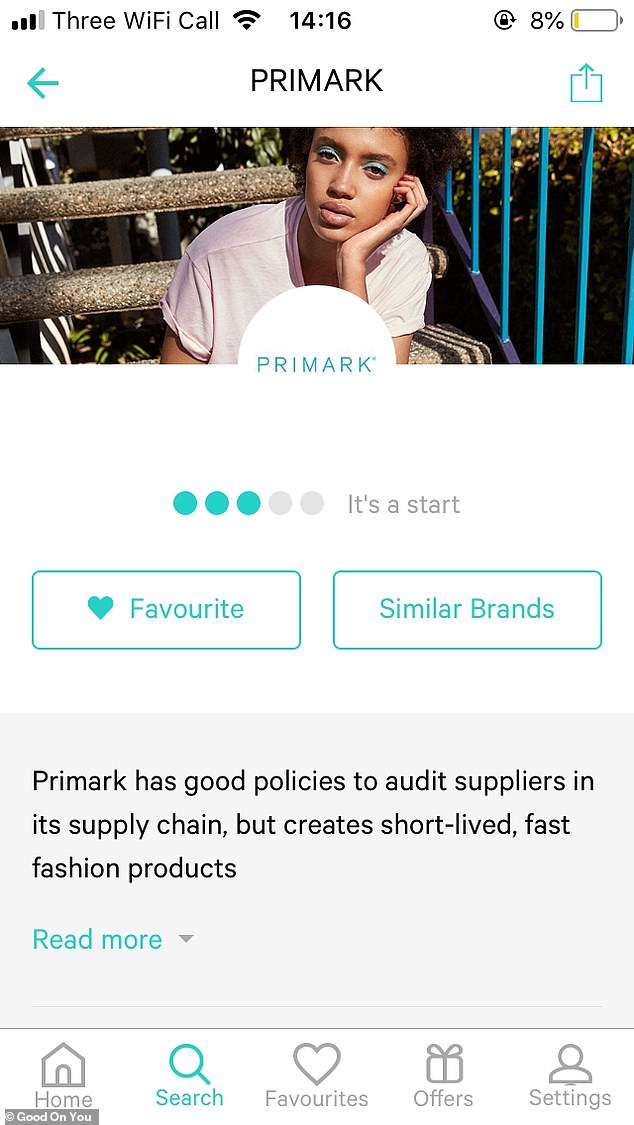 Primark is a member of the Ethical Trading Initiative, but creates short-lived fast fashion products

Gap has set some good labour policies but uses animal products without stating its sources.

Gap does not use eco friendly materials and has taken no action to eliminate or minimise the environmental pollution of chromium and other chemicals from leather tanning processes.

Its labour rating is ‘it’s a start’ based on the 2017 Ehtical Fashion Report which looks at criteria including payment of a living wage, transparency and worker empowerment. 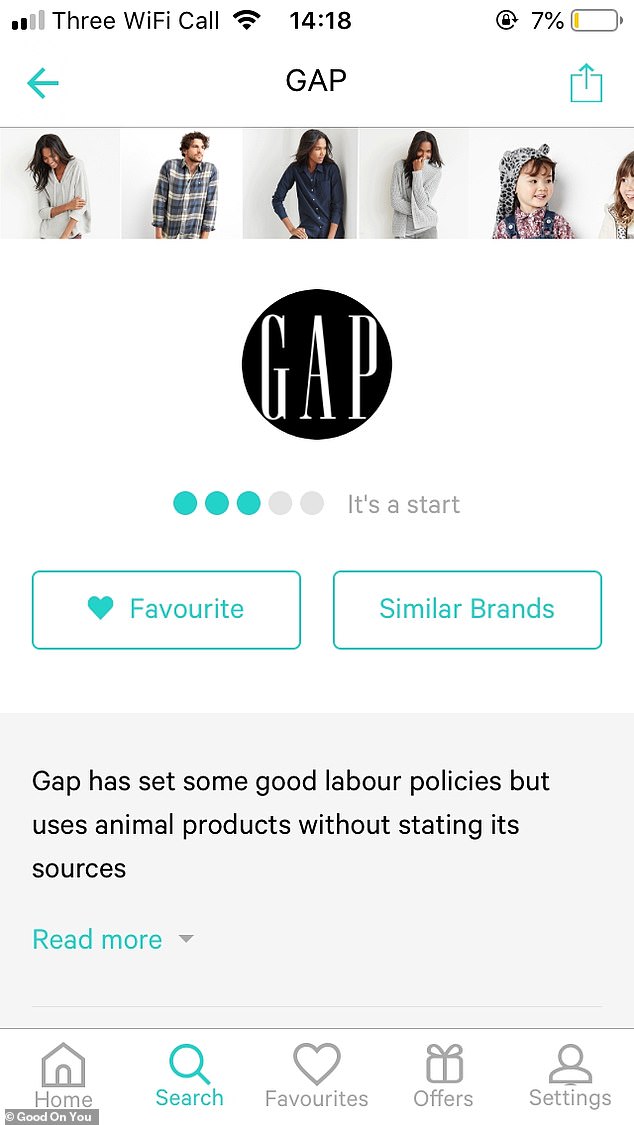