How everyday Australians are making the most of the coronavirus crisis

Australians are using humour in an effort to deal with the coronavirus pandemic.

Social media has been full of people embracing self-isolation from the deadly disease and highlighting the absurdity of panic-buying in stores around the country.

The virus has caused unprecedented social measures to countries around the world, with Australians turning to humour to withstand trying conditions surrounding the disease.

Prime Minister Scott Morrison’s ban for public gatherings of 500 or more people came into play on Monday, forcing the cancellation of various sporting events, concerts and meetings around the country.

Quarantine and self-isolation rules are also being enforced for people who have returned from overseas or have been struck down with the disease.

Staff in many industries are now working from home, leading to some creative posts showing ways to keep active while away from the outside world.

One man was spotted cycling on a stationary bike on the balcony of his apartment while the Mooloolaba triathlon ran outside his home.

Ben Marwe from Adelaide band Bad Dreems wrote a song called ‘I wanna self-isolate with you.’

His lyrics list a range of quarantine friendly activities including playing Guess Who, watching The Office, doing arts and crafts and ‘smashing a case of red.’

Coronavirus has caused mass panic buying for shoppers around the country, with toilet paper becoming almost impossible to find in supermarkets.

Fights have broken out in supermarkets and queues have been seen outside toilet paper factories, highlighting shoppers desperation to get their hands on the product.

This is despite toilet paper being mass produced in Australia and diarrhea not being listed as a symptom of the disease.

Creative posts and memes have highlighted the absurdity of the shortage, including one man who landed in Sydney airport with an emergency package of toilet paper. 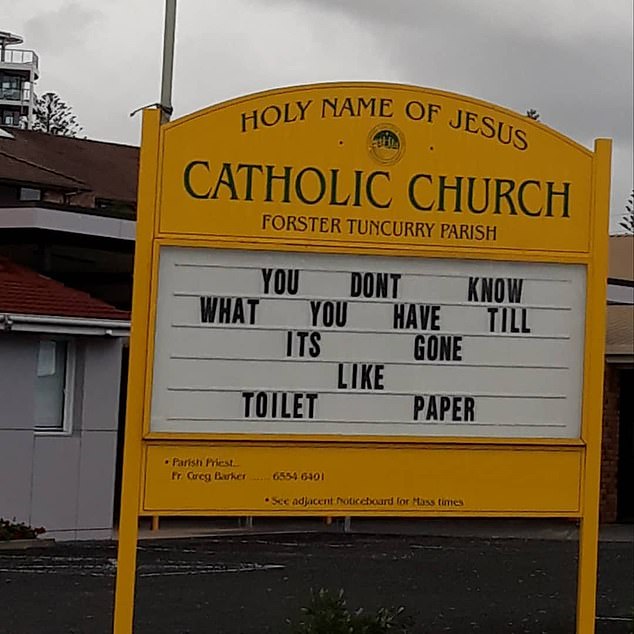 Forster Tuncurry Parish Catholic Church on the NSW mid north coast left a message for their clergy reading ‘you don’t know what you have till it’s gone, like toilet paper’ 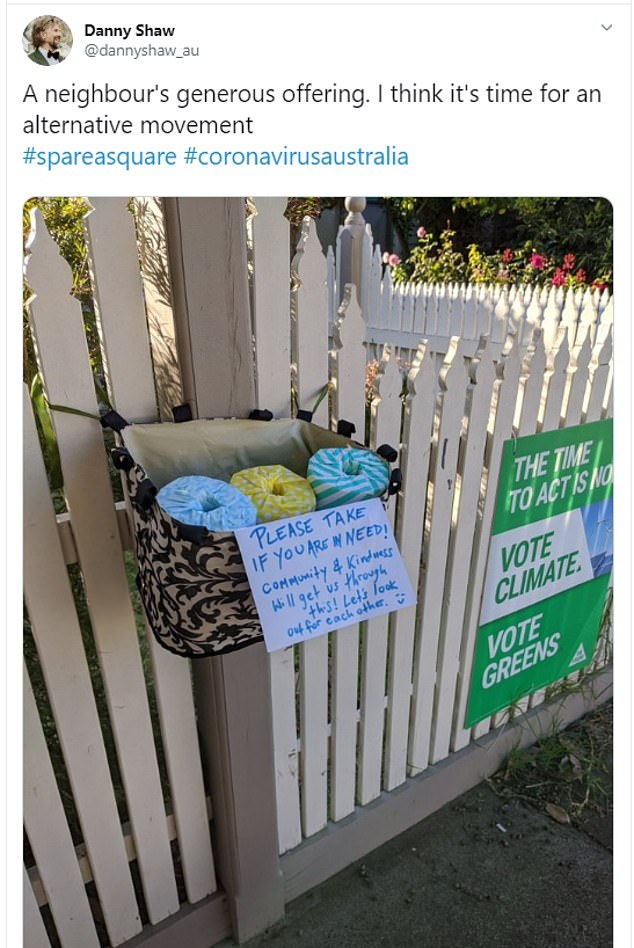 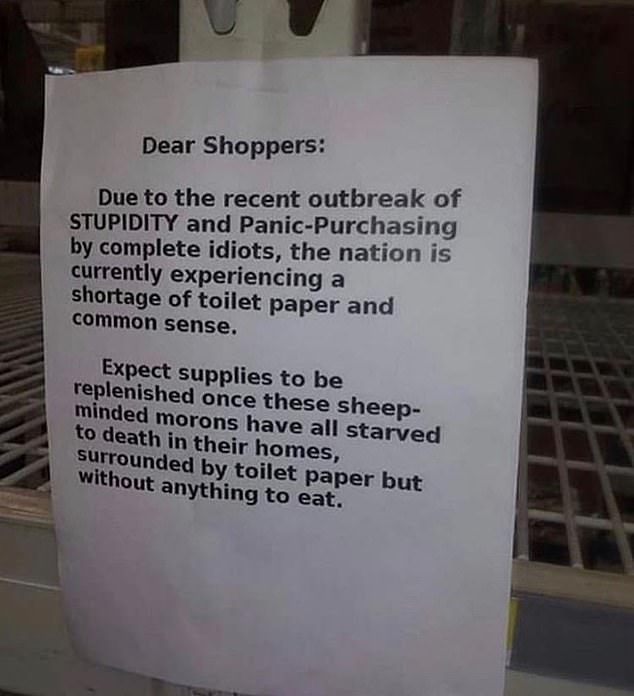 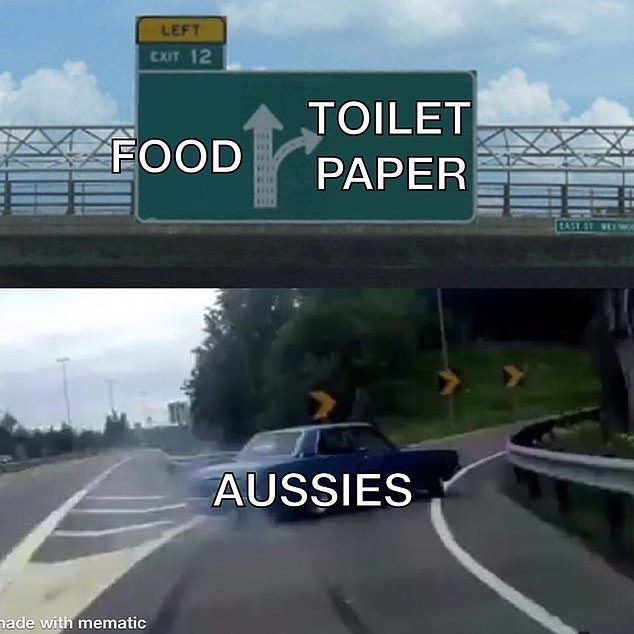 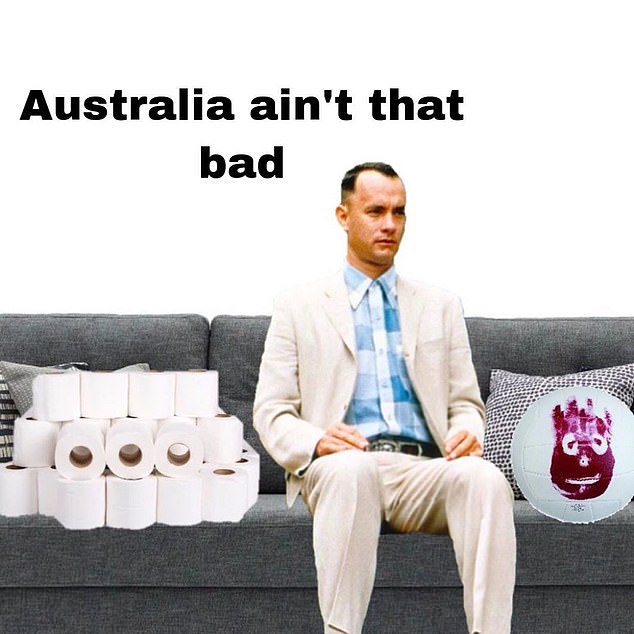 Many businesses were forced to make signs for customers when their supplies of in demand items ran out.

One sign reads ‘due to the recent outbreak of stupidity and panic-purchasing by complete idiots, the nation is currently experiencing a shortage of toilet paper and common sense.’

Other people noted how difficult it has become to buy toilet paper and generously offered free rolls for those in need outside their home.

American actor Tom Hanks and his wife Rita Wilson were both struck down with the virus in Australia and became the subject of memes as a result.

While some stocked up on toilet paper, others topped up their supply of beer, wine and spirits to be ready for a long and boozy stint of self-isolation.

There are now 350 confirmed cases of coronavirus in Australia, including five deaths.

The federal government are reacting to health experts advice and regularly updating measures to best prevent the spread of the disease.

Drinking hot drinks such as tea or infusions and maintaining steady hydration can also help to kill the disease. 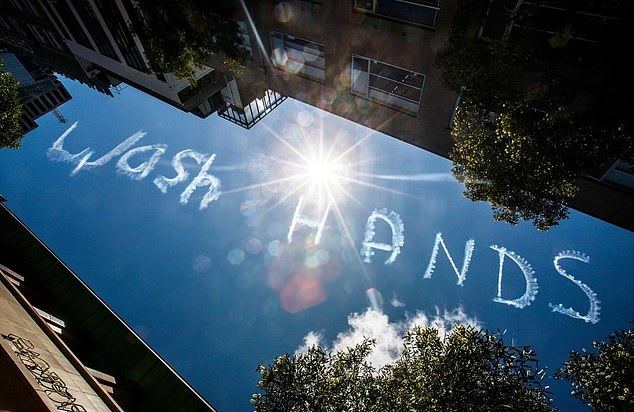 Despite the humour, Australians are taking the coronavirus seriously, with health experts recommending to regularly wash your hands to prevent the spread of the disease