The night before, he appeared to be just another guest checking in at hotel reception during the busy Easter season.

But the next morning, an unassuming figure – marked out only by the rucksack on his back – emerged from his room, coolly strode into the breakfast buffet area and blew himself up, killing the innocents all around him.

These chilling CCTV images show one of the nine terrorists who claimed at least 250 lives – including those of eight Britons – in simultaneous suicide attacks in Sri Lanka on Easter Sunday.

Islamic State has since claimed responsibility. In the latest developments in one of the deadliest terrorist attacks the world has seen, The Mail on Sunday can reveal:

Our pictures show a terrorist later identified as Abul Mukhtar at the five-star Kingsbury Hotel in Colombo. It has now emerged that he checked in and slept at the hotel before calmly carrying out his deadly mission. And with equally blood-curdling cool at the Cinnamon Grand hotel, another terrorist, Inshaf Ibrahim, even sat down and ate breakfast alongside those he was about to murder. 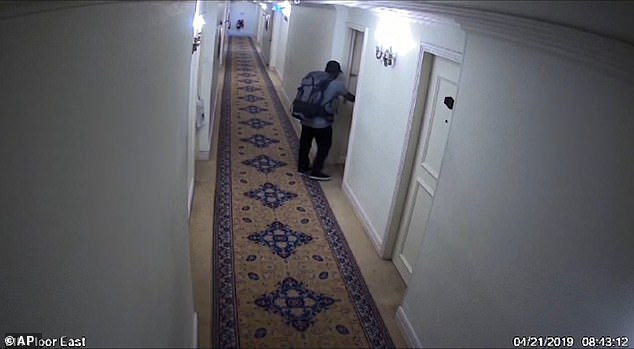 On the morning of Easter Sunday the bomber, an unassuming figure – marked out only by the rucksack on his back – is pictured emerged from his room at 8.43am

Among the dead were a British couple on holiday – GP Sally Bradley, 56, and her husband, retired fireman Bill Harrop – and a British IT director, Lorraine Campbell, 55, who was on a business trip. Rohan Karr, the Cinnamon Grand’s manager, said: ‘Ibrahim behaved like a normal customer. He walked in the night before, he checked in, and we served him a welcome drink.

‘He went up to his room and he came down in the morning with a rucksack on his back.’

Mr Karr said Ibrahim aroused suspicion as he carried his rucksack with him all the time, even as he filled his plate with food.

He also callously chose to sit at a table in the middle of the restaurant to kill the maximum number of diners. Mr Karr said: ‘A staff member watched this and they were wondering why this guy was walking with his bag. He sat, he ate, he waited for people to gather towards the buffet. When he saw a bigger crowd, that’s the time he decided this is the time for me to create maximum damage.’

The manager revealed five of his staff were killed, including one woman who swapped her shift so that her Christian co-worker could attend Easter Mass. Mr Karr recalled the horror of seeing dead bodies strewn everywhere around the restaurant. He said: ‘Bodies, body parts were all over the place – even in the pond there was a hand. And we had to take a 6ft table, break the legs and put the people on that and carry that to take them out of the restaurant.’ 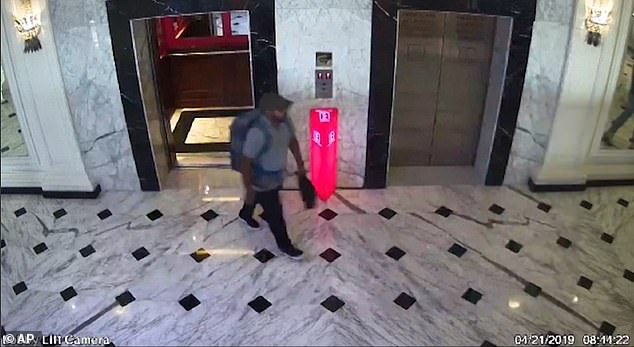 Captured in chilling CCTV images, the Sri Lanka suicide bomber poses as an Easter tourist as he heads to the hotel restaurant

Of the eight Britons who were killed in the attack, five died at the Shangri La hotel as they ate breakfast – among them were Anita Nicholson, 41, her son, Alex, 14, and daughter Annabel, 11. The family, from Upminster, Essex, were on holiday with Mrs Nicholson’s lawyer husband, Ben, who survived.

Matthew Linsey, a City fund manager from Kensington, West London, was also having breakfast with his family. His son Daniel, 19, and daughter Amelie, 15, died in the blast. It is believed that two suicide bombers struck the Shangri La, including cell leader Moulvi Zahran Hashim. The other suicide bomber is believed to have been Ilham Ibrahim, 36, the brother of Inshaf.

The two brothers were millionaires who ran a spice company and a copper manufacturer.

Their company, Ishana Spice Exports Limited, supplies Indian spices to the UK, and it even received an award in London in 2004 at a gala ceremony from a company called Business Initiative Directions. Ilham’s wife, Fatima, who was heavily pregnant, is reported to have blown herself up when their mansion was raided by police. The blast also killed three of her children.

Last week, it emerged that one of the suicide bombers, Jameel Mohammed Abdul Lathief, 36, who blew himself up in a guesthouse, studied aerospace engineering at Kingston University between 2006 and 2007, and lived at a rented house in Tooting, South London. 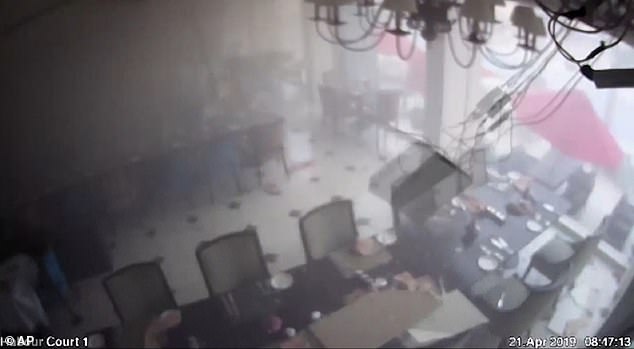 The moment of the explosion in the buffet restaurant, which the bomber has turned into a scene of appalling carnage

MI5 and counter-terrorist experts are now investigating Lathief’s time in Britain, and whether he met extremists in London.

But he is believed to have been radicalised in Melbourne, where he went to study after Kingston University. It is thought he formed links there with local jihadis who would go on to Syria to join IS. Last night, it was reported that Lathief returned to Sri Lanka from Melbourne then travelled to Syria in 2014 to join the murderous Islamic State group.

Once in Syria, he is thought to have become a member of a Western cell within IS called ‘the Legion’, which included among its members Mohamed Emwazi, also known as Jihadi John.

Last week, Lathief’s sister, Samsul Hidaya, said that after he returned from his studies at Melbourne’s Swinburne University, he was a changed man.

She said: ‘My brother became deeply, deeply religious while he was in Australia.

‘He had a long beard and had lost his sense of humour.

‘He became serious and withdrawn and would not even smile at anyone he didn’t know, let alone laugh.’

Sixteen people, including at least six children, have been killed following a firefight between soldiers and extremists linked to the Easter Sunday bombings in Sri Lanka.

Troops from the country’s Special Forces Regiment led an assault on a suspected safe house in the coastal city of Sainthamaruthu on Friday night.

But as heavy gunfire was exchanged, one of the suspected terrorists detonated a suicide vest. By morning, six youngsters, four women and six suspected members of the National Tawhid Jamat group were dead.

Charred bodies were seen being dragged from the building by the security forces.

The Sri Lankan authorities believe the house was a makeshift bomb factory where devices used in the Easter Sunday attacks were made.

Police and the army also raided a property in the nearby town of Samanthurai where they found Islamic State uniforms and flags, 150 sticks of gelignite, 100,000 ball-bearings and a drone camera.

Sri Lanka remains on high alert a week after the atrocities, during which 253 people were killed and more than 500 were injured.

Amid fears and intelligence that the terrorists could strike again, the Foreign Office has urged Britons not to travel there unless it is essential. The US has issued similar advice. Meanwhile, Muslims across Sri Lanka were told not to gather in mosques for Friday congregation prayers, known as jumuah, because of fears of reprisal attacks.

Christian worshippers have also been told to pray at home today rather than gather in churches.

Since last weekend’s attacks, curfews have been ordered each night across cities, including the capital Colombo.

Investigators from the FBI and Scotland Yard have flown to Sri Lanka to help with the probe.