At the height of Hitler’s Holocaust, as millions were being murdered in the death camps, four daring young women risked their lives to expose the twisted experiments Nazi scientists were conducting on camp inmates.

The German SS carried out this medical torture in secret and news of them using human subjects was never supposed to leave the confines of the evil physicians’ laboratories.

However, the sordid details of the experiments were broadcast to the world after the women sent coded letters to their families in which they described their horrific treatment in invisible ink concocted from their own urine.

And more than 70 years later, the story of these women has been told in a series of interviews which form part of Dr. David Gil’s forthcoming book, The Art of Hiding. 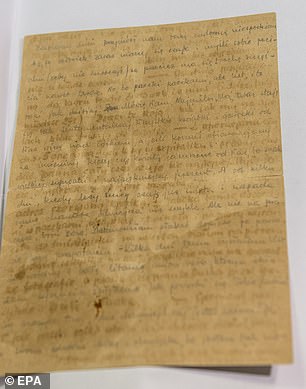 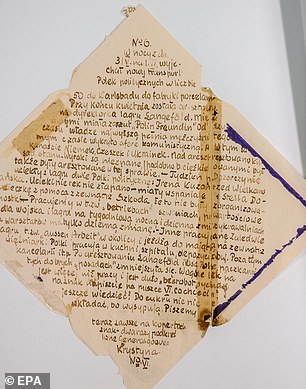 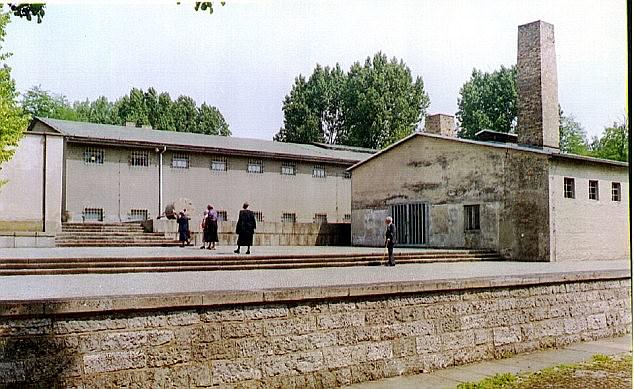 In 1941, after torturous interrogation from Gestapo officers who suspected her family of disobedience, Krystyna was taken to the Ravensbrück (pictured)

One of these Second World War heroines was a Polish woman called Krystyna Czyz whose hometown of Lublin was invaded by German troops in September 1939 when she was just 15 years old.

In 1941, after torturous interrogation from Gestapo officers who suspected her family of disobedience, she was taken to the Ravensbrück concentration camp in northern Germany, according to Haaretz which has seen an advanced copy of the book.

The following year and under the supervision of Karl Gebhardt, the personal doctor to SS leader Heinrich Himmler, Nazi doctors began dragging inmates into their laboratories to conduct sick medical tests.

Among the 74 human subjects – dubbed as ‘rabbits’ – was Krystyna and three other women called Wanda Wijtasik, Janina Iwaska and her sister Krystyna Iwaska.

All four of them suffered excruciating pain at the hands of the camp’s physicians who punctured their flesh with shards of unwashed broken glass to deliberately cause them infection. 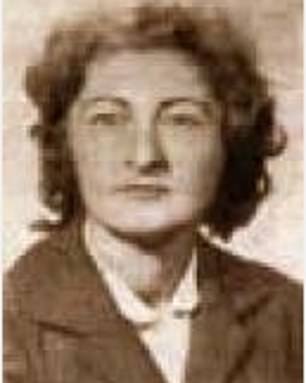 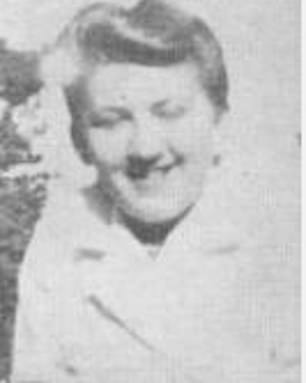 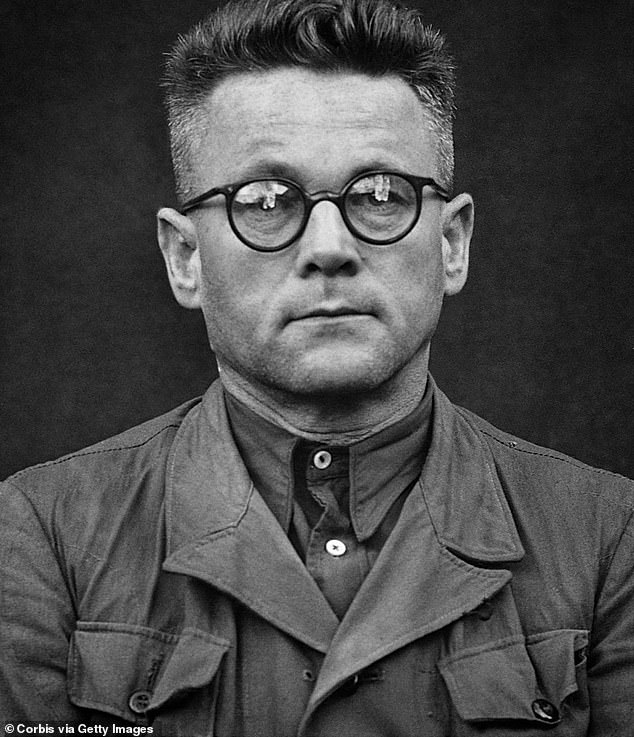 Although their own personal trauma was unbearable, the women resolved to find a way to filter the sordid details of the camp’s experiments out into the world.

Yet they were only allowed to send one letter to their families each month and the content would be heavily censored so that only messages reporting a good camp life would be permitted to pass from the compound.

But the women hatched an ingenious plan to write hidden messages into their letters which would not be spotted by the camp guards.

They realised that if they dipped their scribing stick in urine, the words would quickly vanish from the page as the liquid loses its colour.

However, when the urine is heated up it reappears and thus reveals the words on the page.

Between 1943 and 1944, the women risked their lives to send 27 of these letters in the hope of highlighting the sick abuse of camp inmates to the world.

But their plan relied on their families figuring out the dull letters contained a coded message and discovering how to decipher the true meaning. 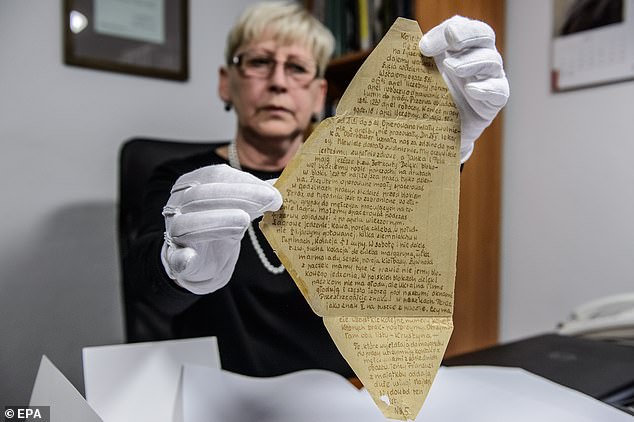 Inmates were only allowed to send one letter to their families each month and the content would be heavily censored so that only messages reporting a good camp life would be permitted to pass from the compound (pictured: Barbara Oratowska presents one of 27 letters) 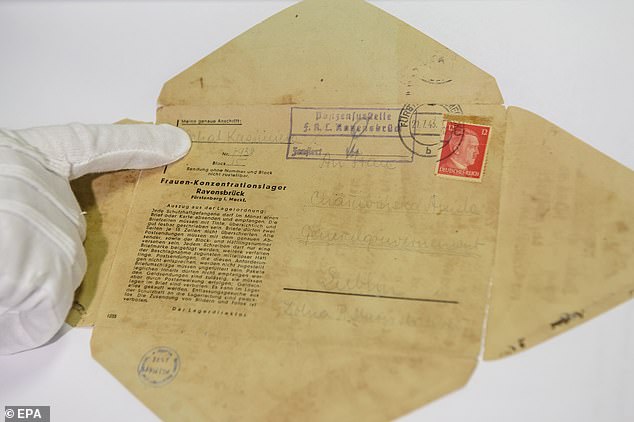 The women realised that if they dipped their scribing stick in urine, the words would quickly vanish from the page as the liquid loses its colour 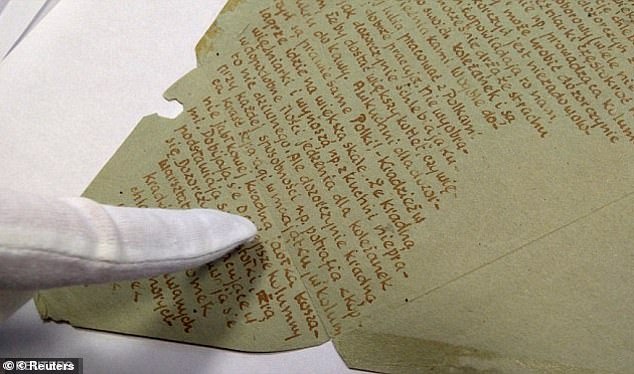 In one of her letters, Krystyna name-dropped a specific book which the siblings had read as children that plots the story of a boy who sends secret messages to tip off her brother to the hidden code

Luckily, Krystyna had left a clue in one of the letters which she sent to her brother, who she believed would detect the hint.

In the note, she name-dropped a specific book which the siblings had read as children that plots the story of a boy who sends secret messages.

At first, her brother was puzzled by the peculiar mention of the book, but suddenly realised that Krystyna was telling him that she too had sent a coded message.

Now that he was alert to the letter’s true purpose, he began scanning the page for clues and found an acrostic pattern of letters which formed the words ‘list moczem’, which translates as ‘letter in ink’.

After heating up the paper, the chilling words ‘we have decided to tell you the whole truth’ appeared in the margins of the page followed by the details of the horrific experiments.

And in May 1943, Janina’s father received a letter, which he decoded, that asked for help plotting the women’s escape.

According to historians from Lund University, it said: ‘Five female Polish political inmates have escaped. We are preparing a new escape. 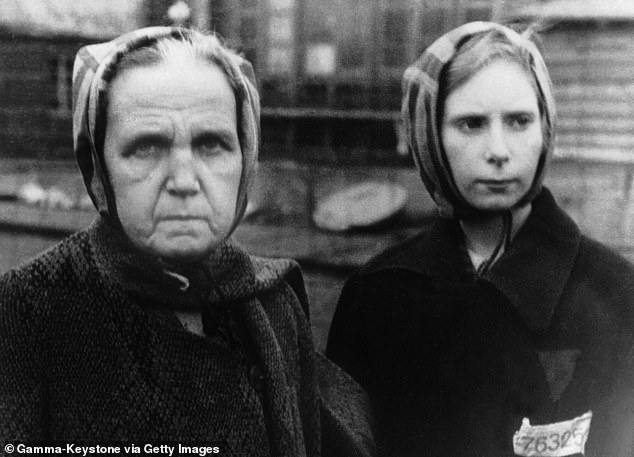 On May 1944, an English radio bulletin said: ‘In the concentration camp for women in Ravensbrück (inmates pictured after the liberation) , the announcer said the Germans are committing new crimes 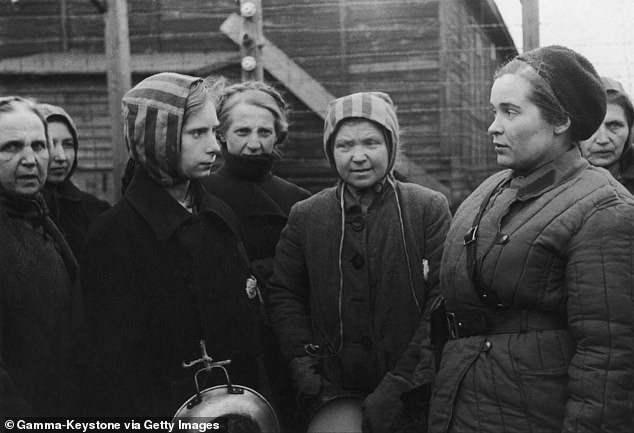 Some 40,000 Polish women were imprisoned in Ravensbrück camp during the Second Wold War 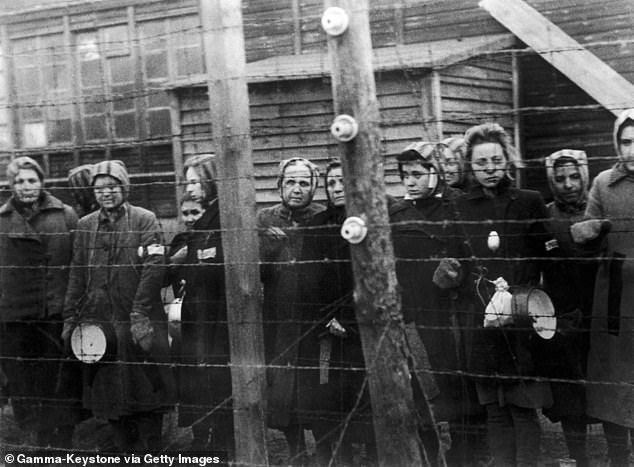 An estimated 50,000 people perished in Ravensbrück while only 15,000 were rescued in the liberation in 1945

‘Send in a parcel: a compass, an accurate map of Germany, two false identification documents with photographs that are not especially characteristic.

It added: ‘You have to do it very skillfully, carefully and invisible … underneath a jar of jam, a secret message tucked in a tube of toothpaste.’

On May 1944, more than a year after the first coded letter was sent, the contents of the women’s messages were broadcast to the world.

An English radio bulletin said: ‘In the concentration camp for women in Ravensbrück, the announcer said the Germans are committing new crimes.

‘The women in this camp are being submitted to vivisection experiments and are being operated on like rabbits.’

Having exposed the gross medical tests being conducted by the Nazis, the heroic women also all survived the closing stages of the war.

Krystyna went on to become an academic, Wanda became a psychiatrist, Janina became a journalist and her younger sister Krystyna became a doctor.

Karl Gebhardt was convicted of war crimes at the Nuremberg trials and hanged in June 1948.