How foxes were kept as pets by Bronze Age tribes 4,300 years ago

Foxes were kept as pets by Bronze Age tribes 4,300 years ago and buried alongside their human masters, new research has found.

Remains found in two ancient cemeteries in Spain showed how foxes were laid to rest alongside their human and canine companions thousands of years ago.

Foxes are harder to tame than other animals because of a ‘stubborn wildness’, say experts, so it was believed they were never domesticated.

But the discovery of four foxes – and a large number of dogs – at the Catalonia sites in Barcelona and Lleida, known as Can Roqueta and Minferri, prove otherwise.

Research also revealed burying humans together with domestic animals was a widespread funeral practice between 2,300 and 1,000BC – the Early to Middle Bronze Age.

Dr Aurora Grandal-d’Anglade, a palaeontologist at the University of Coruna in Spain, said: ‘The case of the Can Roqueta fox is very special, because it is an old animal, with a broken leg.

‘The fracture is still in its healing process, and shows signs of having been immobilised, and cured, by humans.

‘The feeding of this animal is very unusual, as it is more akin to a puppy dog’s.

‘We interpret it as a domestic animal that lived for a long time with humans.’

The study published in Archaeological and Anthropological Sciences found both the foxes and dogs were domesticated and their diet was similar to that of their owners.

Dr Grandal-d’Anglade said: ‘We discovered in some cases the dogs received a special kind of food. We believe this is linked to their function as working dogs.

‘Besides, one of the foxes shows signs of having already been a domestic animal in those times.’ 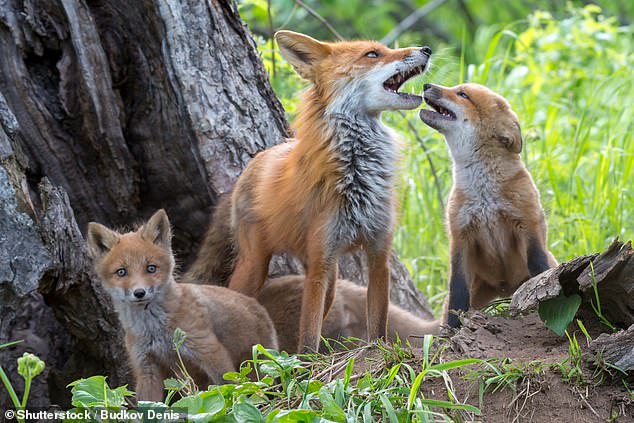 The remains, found in Spain, showed they were laid to rest alongside their human and canine companions (file photo)

Her team’s findings are based on an analysis of the bones of the foxes, 37 dogs, 19 goats, cows and sheep, and 64 humans.

They extracted chemicals known as isotopes which revealed the food the animals would have eaten thousands of years ago.

The three Minferri foxes had a varied diet – similar to that of the dogs.

In two of the tombs uncovered at the site, the remains of three individuals were found together with various animals.

Dr Ariadna Nieto Espinet, an archaeologist at the University of Lleida, said: ‘In one there was the body of an old man with the remains of a whole cow and the legs of up to seven goats.

‘The remains of a young woman with the offering of a whole goat, two foxes and a bovine horn were also found.’

Another contained the body of an individual, possibly a woman, accompanied by the whole bodies of two cows and two dogs.

Dr Nieto Espinet said: ‘We still don’t know why only a few people would have had the right or privilege to be buried with this type of offering, unlike what happens with the vast majority of burials.’

In Can Roqueta, clear differences were observed in the deposits of domestic animals within the tombs of men, women – and even children.

From this we can infer the existence of an inheritance of social status from birth.

Dr Nieto Espinet said domestic animals were a very important part of the crop and livestock farming economy of the Bronze Age – and of the belongings of some people in life.

She added: ‘These could be an indicator of the wealth of the deceased individual or of his clan or family.’

‘It seems species such as cattle and dogs, two of the most recurring animals in funeral offerings, are those that might have played a fundamental role in the economy and work as well as in the symbolic world, becoming elements of ostentation, prestige and protection.’ 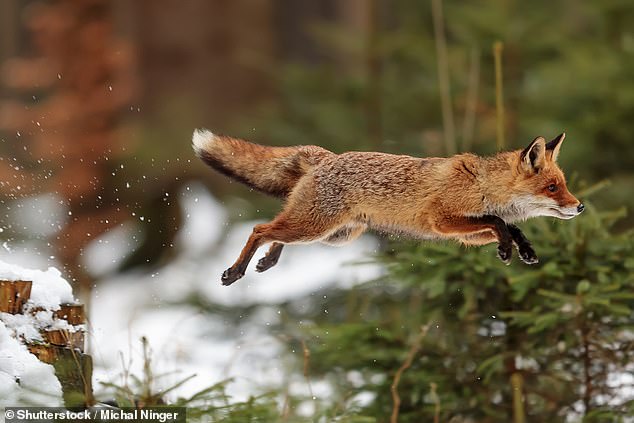 Foxes are harder to tame than other animals because of a ‘stubborn wildness’, say experts, so it was believed they were never domesticated (file photo)

At Can Roqueta, there was even a specific cereal-rich food preparation identified for larger dogs probably used for carrying loads – and for at least one of the foxes.

Co author Dr Silvia Albizuri Canadell, an archaeozoologist at the University of Barcelona, said: ‘These specimens also show signs of disorders in the spinal column linked to the transport of heavy objects.

‘Humans were probably looking for a high-carbohydrate diet because the animals developed a more active job, which required immediate calorie expenditure.’

The cows, sheep and goats had mainly herbivorous diet. Their function was probably to provide milk, meat or wool rather than serve as a work force.

The humans and dogs showed signs of a moderate consumption of animal protein.

Dr Grandal said: ‘Not necessarily much meat – they could be, for example, derived from milk.’

Objects that have also been unearthed at the digs included sieves that served as ‘cheese making devices’.

The fundamental role of dogs during the Bronze Age, when livestock, along with agriculture, constituted the basis of the economy, was that of the surveillance and guidance of herds.

They were also responsible for taking care of human settlements, given the risk posed by the frequent presence of dangerous animals such as wolves or bears.

Similar pathologies have also been recently identified in the vertebrae of Siberian Palaeolithic dogs, suggesting one of the first tasks since their early domestication was the pulling of sleds, in addition to hunting.

Its role as a transport animal in the first migrations and human movements through glacial Europe could have been fundamental and much more important than believed until recently.