How frontline medics are boosting morale by dancing

Doctors with dancing feet! How frontline NHS medics are keeping morale high during the coronavirus crisis by performing in hospital corridors and car parks

Many frontline healthcare workers face the most difficult days of their careers as they lead the response to the coronavirus pandemic.

But these videos show that, even in their darkest moments, doctors, nurses and ambulance medics are still finding ways to boost morale.

NHS workers across the UK have taken to social media to share clips of themselves dancing with their colleagues in hospital corridors and carparks to keep their spirits lifted.

Some have used the viral clips to communicate important messages about hygiene and handwashing while others simply want to bring a smile to your face.

The trend has also caught on around the world, with healthcare workers in the US, China and Australia joining in on the action.

Hospital worker Alice Marson, of York, shared a clip of colleagues dancing to I Will Survive

Hospital worker Alice Marson, of York, was praised after she shared a clip of colleagues dancing to Tina Turner’s I Will Survive.

The fun routine was filmed in the hospital and has received more than 24,000 likes on the platform. 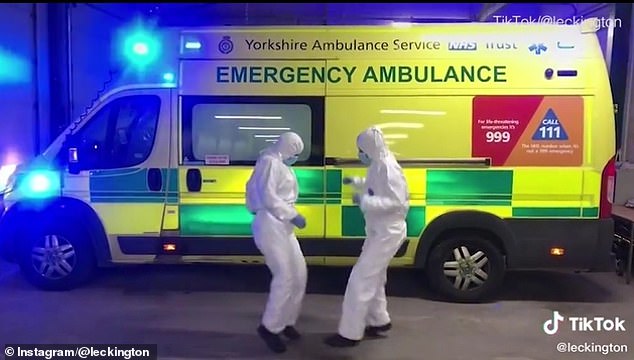 Sarah, from Yorkshire, shared a TikTok video of her and her crew mate dancing in a carpark

Emergency response worker Sarah, from Yorkshire, shared a TikTok video of her and her crew mate doing the viral foot tap dance in the hospital car park.

The difficult-to-master dance gave the pair a moment of light relief.

It has received more than 17,000 likes and has been met with hundreds of positive comments from fellow users thanking Sarah for her work. 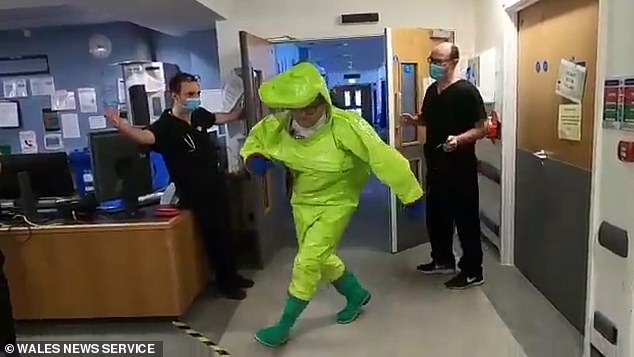 They chose the song Respect as an instruction for people to follow the Government’s advice and obey lockdown rules.

Staff dance around the department wearing face masks with some in blue gloves and plastic aprons.

A video of hospital staff dancing to Olly Murs’s Dance With Me Tonight went viral after two nurses posted it online in mid-March.

The clip of the theatre team at Basildon Hospital has now been viewed hundreds of thousands of time online.

The medics were also treated to a surprise when Murs sent them a video message to  thank them for their frontline work.

At the end of March, Dr Steve Dunn, CEO of West Suffolk Foundation Trust shared this video of nurses working on a COVID-19 ward dancing at the end of a tough day.

He wrote: ‘Love this video by our F10 team who are looking after suspected Covid-19 patients. Takes a lot of courage. But when they had a challenging day they did this to get through #teamwork.

‘They #StayAtWorkForYou so #PleaseStayAtHome. And if you can make this viral for them!!!!’ 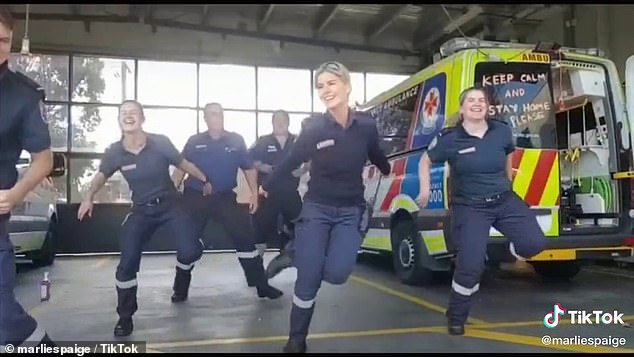 Paramedics have created a hilarious dance to remind Australians how to wash their hands and practice good hygiene during the coronavirus crisis.

The clip is a parody of American workout videos in the 80s and features a Texas accent voice over to introduce the various steps in the routine. 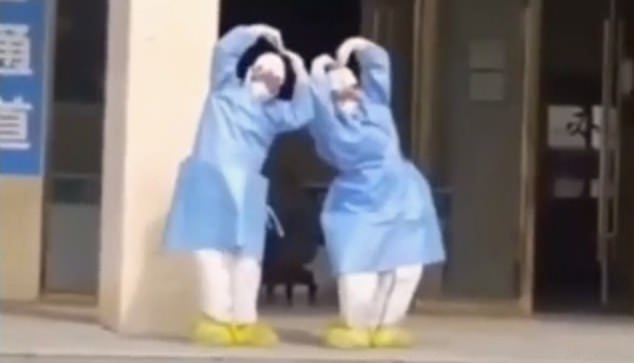 Two Chinese medical workers were caught on camera performing their version of the famous ballet ‘Swan Lake’ to celebrate the full recovery of their patients at the end of February.

Six coronavirus patients were discharged from the People’s Hospital of Linbi County in Suzhou, Anhui Province of eastern China.

The hazmat-suited medics are seen in a video gleefully dancing on their tiptoes as their patients left the hospital to go home.