How Gary Oldman was transformed into Churchill

Gary Oldman’s mesmerising performance as Winston Churchill in the film Darkest Hour has, quite rightly, earned him Best Actor Bafta and Oscar nominations in the forthcoming awards.

The transformation of Oldman — a lean and youthful 59-year-old with a full head of dark hair — into a stooped, portly, fair-skinned, balding man of 66, heavy of jowl and gait, is no less deserving of accolades.

Indeed, some of the team of make-up artists have been nominated for Oscars and tomorrow’s Baftas too.

Now, through this remarkable sequence of exclusive pictures, the Mail can reveal the ‘blood, toil, tears and sweat’ — including daily four-hour make-up sessions starting at dawn — that lay behind his amazing metamorphosis into Churchill.

Bafta hopeful: Gary Oldman as we know him 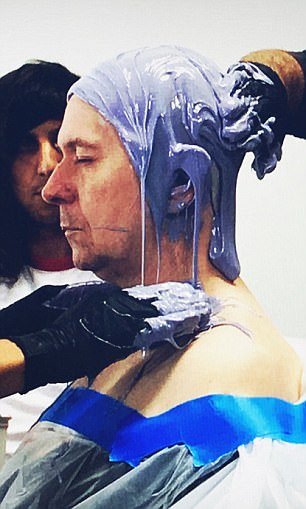 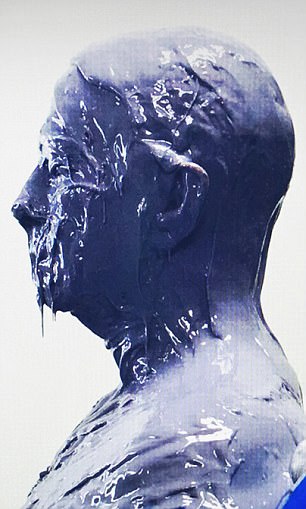 Sticky start: Oldman’s head, neck and face are covered in a silicone mix by make-up expert Kazuhiro Tsuji to create an intricate mould

Work on ‘becoming Churchill’ began a year before cameras started to roll. ‘When they said “Winston Churchill” I laughed and said, “Hang on, look at me? Maybe Stan Laurel,’’ ’ Oldman told me.

‘If he’d said no, I wouldn’t have done it,’ Oldman has said, describing Tsuji — known as Kazu — as ‘one of the only people on the planet who could pull it off’. 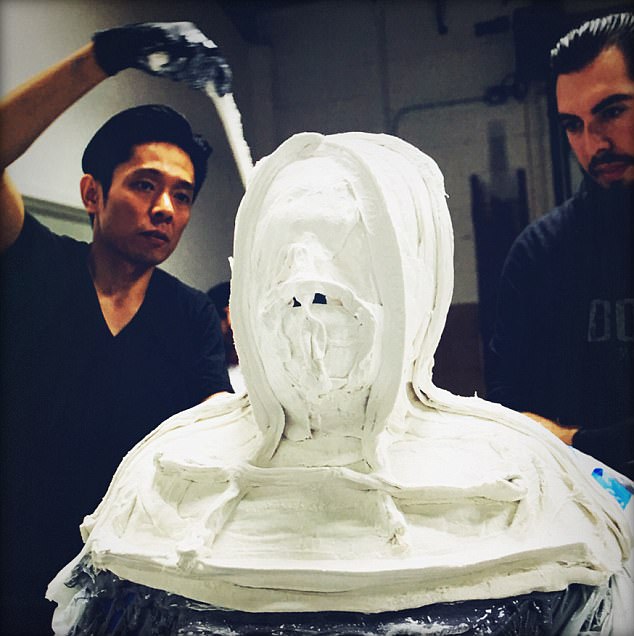 Shaping up: Special effects genius Tsuji then covers the mould with a plaster compound to create a bust

The pair had met 18 years earlier on Planet Of The Apes (in the end, Oldman didn’t do the film), and in the years since Tsuji had garnered award nominations for best make-up and hair styling on a succession of box office hits, including How The Grinch Stole Christmas and The Curious Case Of Benjamin Button (in which Brad Pitt stars as an elderly man who ages in reverse).

Tsuji had retired from films to concentrate on fine art sculpting. But he answered Oldman’s request.

First, they studied photos of Churchill in 1940, the year covered by the film when he became prime minister. 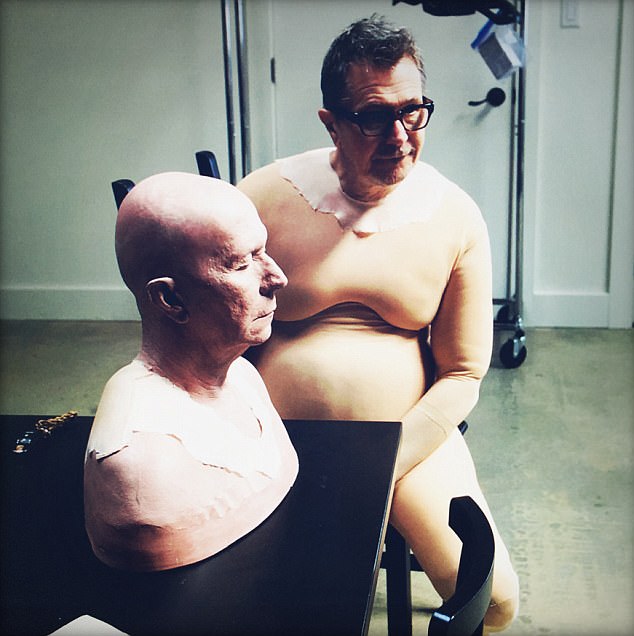 Double take: Oldman with the finished replica, which is ready to be sculpted with Churchill’s features

Then Tsuji took meticulous measurements of Oldman’s head and studied both his and Churchill’s face in minute detail. One observation was that Oldman’s eyes were closer together than Churchill’s. ‘It’s like comparing greyhound and bulldog,’ Tsuji told the actor.

To prepare for the manufacture of the prosthetics that would transform him, Oldman shaved his head, grew out his eyebrows and bleached them along with his eyelashes. He also had his teeth painted to mimic Churchill’s poor and discoloured set.

The next stage took place in Tsuji’s Los Angeles studio, where an intricate mould of his face was made by spreading a sticky, blue silicone mix over his head, neck and face, then applying additional strips of silicone over his facial features. 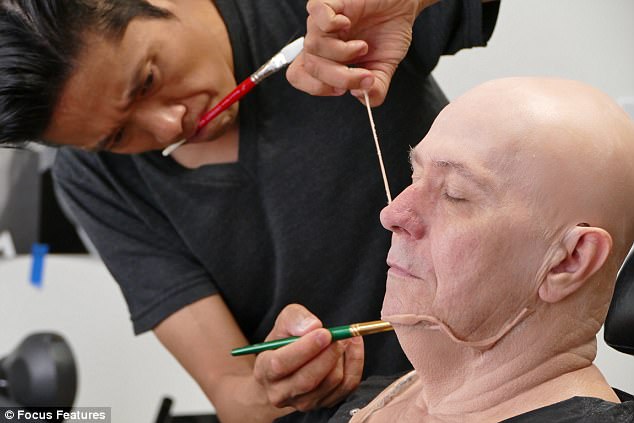 Skin deep: With Tsuji happy with the bust, it is used to make silicone ‘fillets’ to stick on Oldman’s face in a daily four-hour make-up routine

This mould was then covered with a silicone-plaster compound to make a full bust of Oldman.

Now Tsuji’s artistry came into play as he worked on the bust, sculpting and shaping it to incorporate elements of Churchill’s features. He went through several busts before he was satisfied. ‘Kazu tried to find the perfect hybrid of me and Churchill to give the spirit of Winston, the illusion of him,’ Oldman explained.

Once Tsuji had completed the facial mould, it was sent to Barcelona, where brilliant make-up artists David Marti and Montse Ribe made the silicone rubber prosthetic skin — or fillets — that would later be painstakingly applied to Oldman’s face to impose Churchill’s features on it. 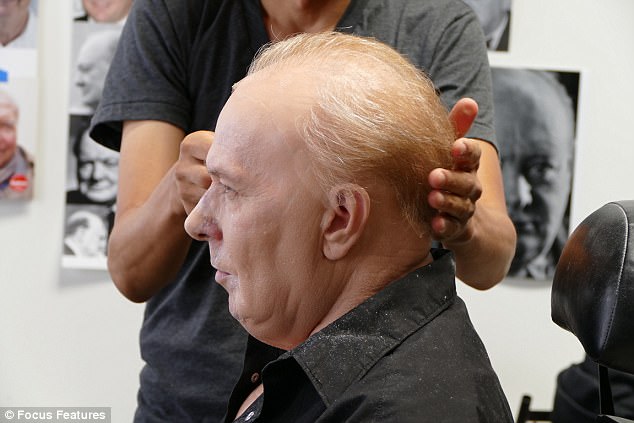 Hair we go: A ‘Baby European’ wig is added as the transformation takes shape. Gary’s eyebrows and lashes are also bleached

There were five pieces in total: neck, left and right side of the face, nose and chin. The actor’s lips and forehead were left uncovered, so he could convey facial expressions. Once the pieces were applied, it was difficult to see the join.

‘It’s all about where the make-up meets you and you meet the make-up,’ Oldman recalled.

‘The edge of the prosthetic was tissue thin, so delicate that it became almost a very light layer of skin that moved with my face naturally. All those wonderful little techniques made a flawless bit of artistry.’ 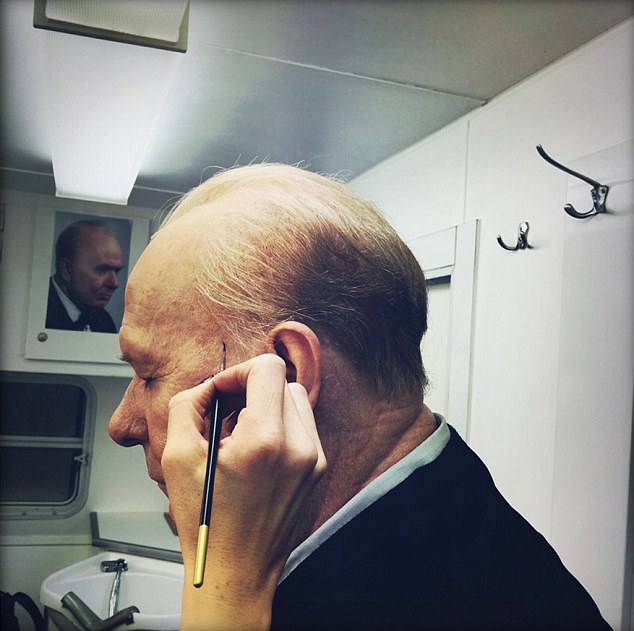 Lifelike: Make-up supervisor David Malinowski gets his paint brush out to add on Churchill’s blotches, veins, moles and blemishes

Tsuji was also instrumental in deciding how make-up would be applied to the prosthetics. New ‘fillets’ were used every day.

Once filming began, make-up supervisor David Malinowski set his alarm for 1.15am to ‘base spray’ the skin-toned bits of silicone with a paint that became known as Blenheim Blush (a reference to Blenheim Palace, where Churcill was born).

Each morning of the 48-day shoot, Oldman — who was in almost every frame — would have his head shaved and take up residence in the make-up chair, while Malinowski and make-up artist Lucy Sibbick worked either side of him to create his ‘Winston face’. 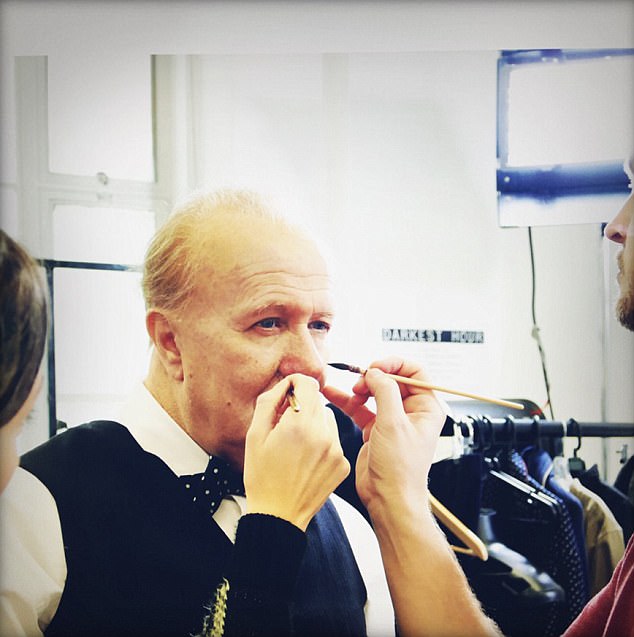 Brushing up: The team uses a skin-tone base spray they called Blenheim Blush in honour of Churchill’s birthplace

He painted on blotches, veins, moles and other blemishes, while Sibbick cleaned and dressed a wig that was made from hair known as Baby European.

Oldman’ ha said: ‘I loved that, when you look into the mirror and you start to see the essence of the man looking back at you. That was my Zen state in the make-up chair. I’d sit there and begin to get a little grumble in my voice. Then he would arrive.’

He estimates he wore the prosthetics 61 times and spent over 200 hours in the chair. 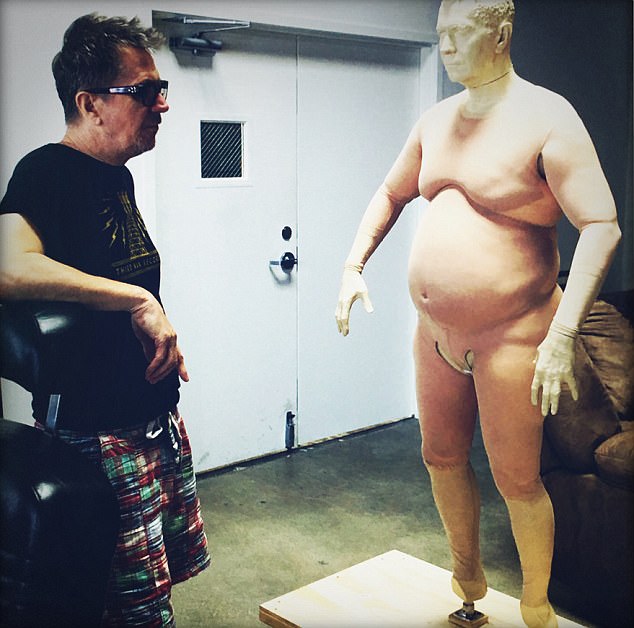 Piling on the pounds: Oldman also had a ‘fat suit’ to ape Churchill’s shape, but it was gruelling to wear

Tsuji also helped design the foam ‘fat suit’ made by Vanessa Mi Kyung Lee, which Oldman used to acquire Churchill’s girth (he refused to gain weight, fearing he would never shift it).

Oldman’s wife, Gisele Schmidt, took photos when he first tried on the suit. She said: ‘At first it zipped up perfectly but it became very restrictive and we had to come up with different ways of closing it by the end.’

This was in part because Oldman was, by that time, in some discomfort from nicotine poisoning after puffing through 400 Maduro cigars — Churchill’s favourite brand. 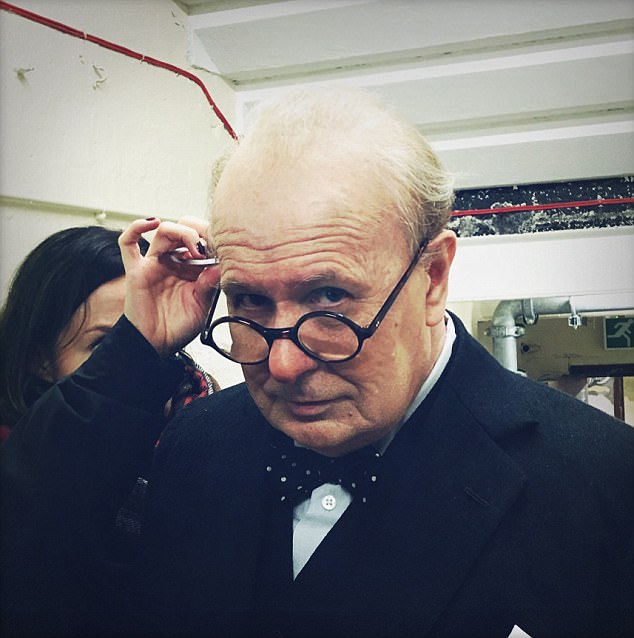 Finishing touches: Oldman’s metamorphosis into the PM, including bow tie and glasses, is complete

At the end of each day, it took two hours to remove ‘Churchill’s face’ from Oldman, and a pile of discarded silicon ‘faces’ soon accumulated in a corner of the make-up trailer.

Oldman was moved by his collaboration with his make-up stars, saying: ‘These pictures don’t just happen.

‘They should look effortless, but it’s a real process to get it as good as it is. They were artists, magicians really, and I could not have become Churchill without them.’