How genes in deer antlers could ‘switch off’ deadly tumours

Vladimir Putin bathes in blood extracted from deer antlers, it has been claimed – a treatment that has been dubbed ‘natural Viagra’.

The Russian leader, who turns 70 in October, was said to have been introduced to the macabre practice in the mid-2000s by his defence chief Sergei Shoigu during a spa break in the Altai mountains of southern Siberia.

There has been no official comment on the claims since Russian journalists broke the news recently, but stories of guest houses in the region offering baths in deer blood have long circulated.

In a 2015 interview, one Altai guest-house owner said: ‘You feel euphoric after the first bath, like you are flying. After a second bath, symptoms of some chronic diseases get stronger, to then be healed.’

There’s no scientific evidence to support the health claims of bathing in deer blood, but now mainstream medicine has recently taken an interest in the potential of substances found in antlers as they grow (stock photo)

There’s no scientific evidence to support the health claims of bathing in deer blood, but now mainstream medicine has recently taken an interest in the potential of substances found in antlers as they grow.

Deer horns fall off and regrow each year – during the spring they’ll increase in length at a rate of about an inch a day.

They are the only mammalian body part that regenerates every year, and are one of the fastest-growing living tissues found in nature.

During their growth phase, antlers are pliable, rounded and covered in a soft velvet-like skin which is supplied with nutrients by a network of blood vessels.

As the antlers mature and turn into bone, the circulation tapers off and eventually the skin is shed, revealing the horns.

Doctors in China and Korea prescribe slices of deer antlers which are dried and brewed into a tea. 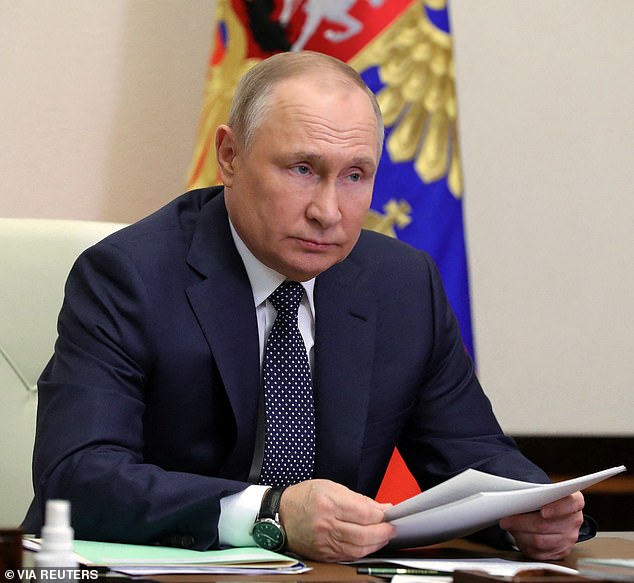 Vladimir Putin bathes in blood extracted from deer antlers, it has been claimed – a treatment that has been dubbed ‘natural Viagra’. The Russian leader, who turns 70 in October, was said to have been introduced to the macabre practice in the mid-2000s by his defence chief Sergei Shoigu

They claim it can do just about anything from fighting viruses and bacterial infections to easing allergies, improving heart health and rejuvenating skin – as well as boosting sexual performance in middle-aged men.

But animal rights groups have campaigned against the practice, which involves the deers being tied down while their soft antlers are sawn off. Online videos of the process show the distressed animals shrieking throughout.

In some horrific clips, incisions are made into the deer’s jugular vein to drain more blood. But the animals are not killed, and are instead forced to undergo the ordeal year after year.

One compound found in developing antlers that has sparked particular interest is a hormone called Insulin-like Growth Factor 1, or IGF-1.

In concentrated forms, IGF-1 is used as a performance-enhancing drug injected by athletes, said to promote muscle growth and repair.

It has been banned by the World Anti-Doping Agency, and Fijian champion golfer Vijay Singh faced sanctions in 2013 for admitting he used deer-antler spray, although these were later dropped.

But there is little evidence to suggest they work, as the amounts of the hormone they contain are minimal.

Recent studies have found, however, that deer antlers could hold clues about new ways to fight cancer.

Antler development is governed by specific genes that switch on and off rapid tissue growth. Cancer is also characterised by fast tissue growth – which is what leads to tumours forming.

They now hope this could help in the development of anti-tumour therapies.

Lab studies have also found powdered extracts of antlers suppress cancer-cell growth, although this has not been shown in human trials.

Professor Hendrik-Tobias Arkenau, consultant oncologist and medical director of the Sarah Cannon Research Institute UK in London, said: ‘It’s not outlandish to think substances found in deer antlers, which are made of a unique type of tissue, might hold some promise as an anti-cancer treatment.

‘It’s absolutely worth studying. But it’s nonsense to think bathing in blood will do anything for health.’