How George W. Bush rejected diplomacy with the Taliban to launch Afghanistan invasion after 9/11

George W. Bush told a State Department official who tried to persuade him not to invade Afghanistan: ‘F*** it, we’re going to war’.

The former president gave the blunt comment at Camp David days after 9/11 as he decided whether to go after the Taliban, a new documentary reveals.

Mike Morell, Bush’s briefer about the CIA, said that the President remarked ‘the only way to do that is militarily’ – and it was too late for diplomacy.

The extraordinary anecdote features in a new documentary about the Bush White House which says he had a ‘vacuum’ for foreign policy that was filled by his hawkish advisers.

A new documentary about George W. Bush sheds new light on the events after the September 11, 2001 attacks which turned Bush into a wartime president. He told State Department officials ‘F*** it, we’re going to war,’ from Camp David (pictured) days after the attacks 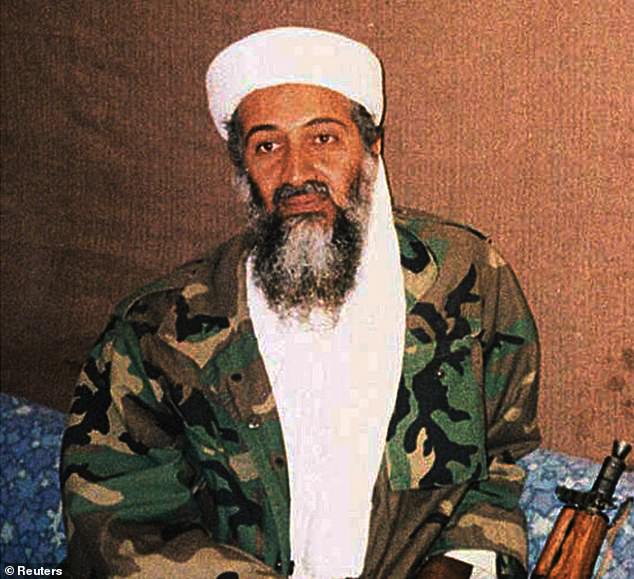 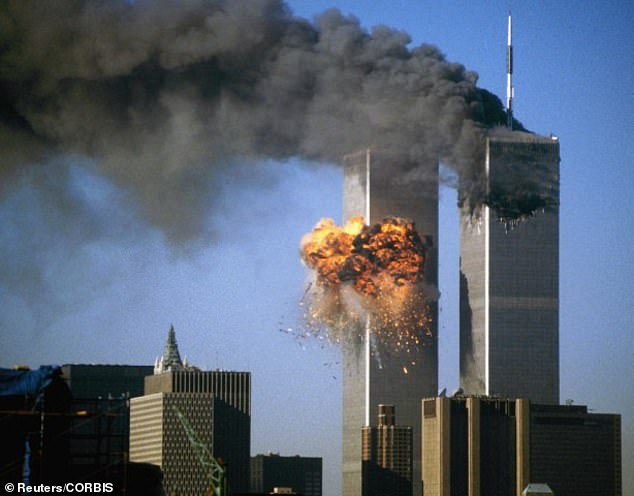 At one point Bush’s Secretary of State Colin Powell told a colleague: ‘The Vice President knows how to get the cowboy in Bush to pull his 45 and start shooting – and I don’t know how to get him to put it back in the holster.’

The four hour documentary, ‘American Experience: George W. Bush’ is airing Tuesday on PBS, days after Bush waded back into politics with a video urging unity in the face of the coronavirus.

He was slapped down by Donald Trump who said Bush was ‘nowhere to be found’ when he was impeached.

The documentary sheds new light on the events after the September 11, 2001 attacks which turned Bush into a wartime president.

The documentary argues that Bush had a blind spot when it came to foreign affairs and that his powerful vice president Dick Cheney took advantage of it.

After ordering the invasions of Afghanistan, where the Taliban were hiding out, and Iraq, Bush revoked the Geneva convention protections for terrorism prisoners.

Suspects were tortured in what became one of the darkest periods in American history.

In the film there are eye popping anecdotes about the hours after 9/11 when Bush was flown to a military base in Nebraska amid fears he could be attacked.

But as soon as Bush arrived he told his advisers on the TV screens in front of him: ‘I am coming back to Washington, don’t argue with me, I’m coming back. Now.’

Within hours he was on his way. 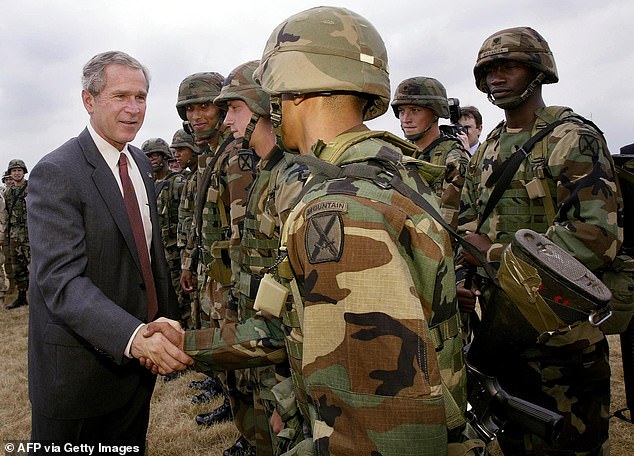 State officials urged Bush to try diplomacy in Afghanistan before resorting to force after 9/11, but Bush said: F*** it, we’re going to war’. He’s pictured greeting troops at Fort Drum in 2002, home of an infantry force that was deployed to Afghanistan shortly after the 9/11 attacks 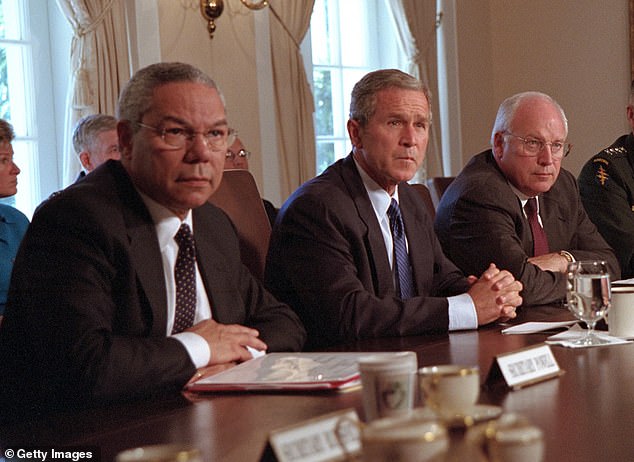 The president had a blind spot when it came to foreign affairs and his powerful vice president Dick Cheney (right)  took advantage of it, the doc claims. Secretary of State Colin Powell (left) told a colleague: ‘The Vice President knows how to get the cowboy in Bush to pull his 45 and start shooting – and I don’t know how to get him to put it back in the holster’ 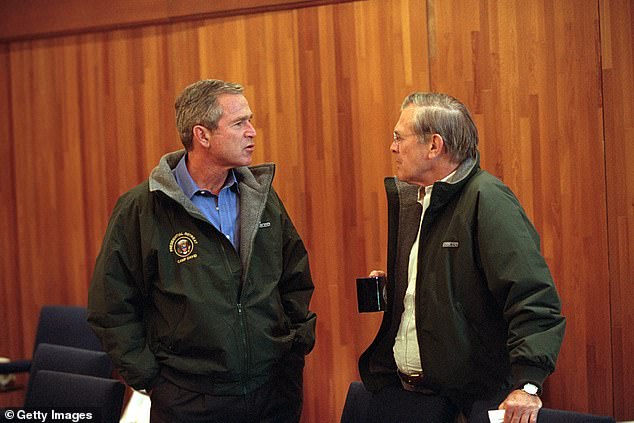 President Bush and Secretary of Defense Donald Rumsfeld are seen chatting at Camp David on September 15, 2001, on  a break from a National Security Council meeting

Earlier in the day Bush found out another plane had gone into the Pentagon. Bush’s deputy chief of staff Karl Rove said: ‘The call I could hear only one side of the conversation but I knew it was bad when he said ”Is Rumsfeld alive?”’

Morell, who briefed Bush every day on CIA intelligence, said that he felt intense guilt for letting the attack happen.

Bush ‘didn’t want to hear’ about CIA briefings that Osama bin Laden was planning something on US soil.

Morell says in the film: ‘He told me his number 1 job was to protect the American people and he told me he failed on 9/11 and he could not let that happen again.’

In a speech at Camp David Bush said he wanted to ‘smoke out’ the terrorists, the kind of macho language that earned him derision around the world.

Soon after that the State Department official urged him to try diplomacy in Afghanistan before resorting to force.

‘The president’s mindset was: they did this. They have the capability to do this, and I have to make sure they don’t do it again. And the only way to do that is militarily’. 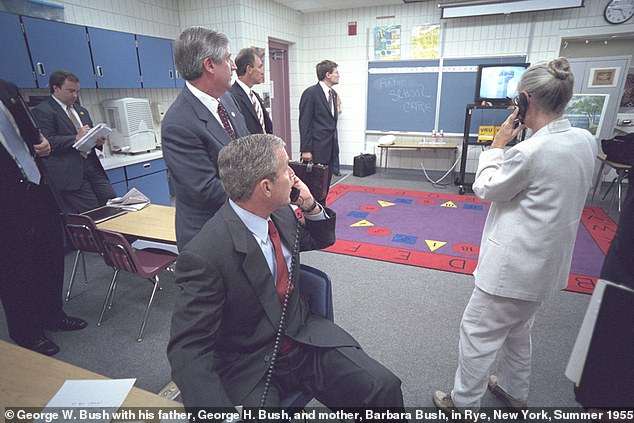 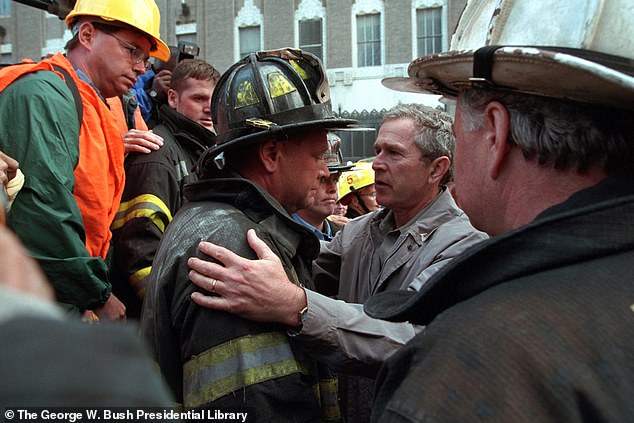 President George W. Bush is seen embracing  a firefighter at the site of the World Trade Center days after the 9/11 attacks

During the hunt for bin Laden the military thought they had him tracked down in the Tora Bora mountains in Afghanistan but he got away.

Morell says how he told Bush that ‘I have some really bad news – Bin Laden escaped.’

According to ‘American Experience’, Bush thought that invading Iraq was a chance to ‘spread American values.’

He thought it was his ‘destiny’ and he had an ‘evangelical sense of righteousness’ which clouded his judgement.

When Bush asked Cheney to dig up proof about Saddam Hussein’s weapons of mass destruction it put a bomb under his presidency.

The documentary says that Bush was ‘woefully educated in foreign affairs, inclined to believe the worst in Saddam’ and ‘accepted as fact’ what Cheney and his cabinet were telling him.

In fact it was untrue and Bush was later accused of lying to the country as the basis for the invasion of Iraq.

The cost in American lives was steep and during the eight year long conflict 4,497 American soldiers were killed.

Dana Perino, who was Bush’s press secretary at the time, described how he would meet with as many families of dead soldiers as he could.

Describing one encounter with a man who was on life support and wasn’t going to make it, Perino said that his mother ‘was so mad, she railed at the President, he didn’t try to leave’

When they got onto Marine One, Bush said: ‘That mama sure was mad at me’. Perino tells the film: ‘He looked at me. He looked out the window and this one tear came down his cheek and he said: ‘I don’t blame her a bit’.

‘American Experience’ also examines Bush’s life before the Presidency going back to his wild days in Texas where he was heavy-drinking and drifted through life until he hit 40 and turned his life around. 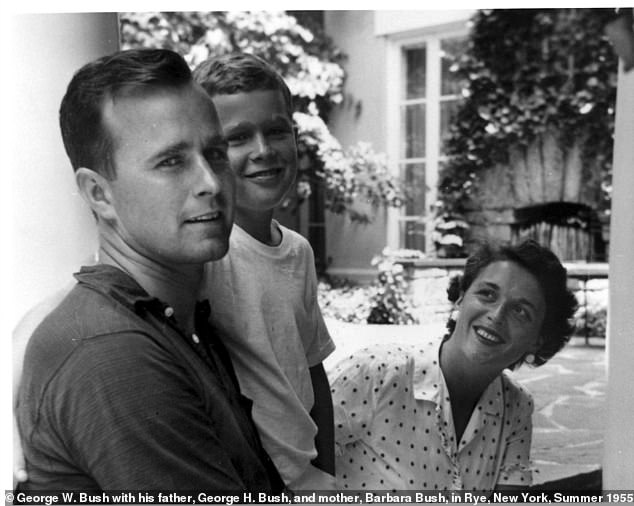 George H.W. Bush (left) was a war hero who rose through the Republican party to become the 41st President; in contrast, his son George W. Bush (center, with mother Barbara) had been a ‘screw up’ 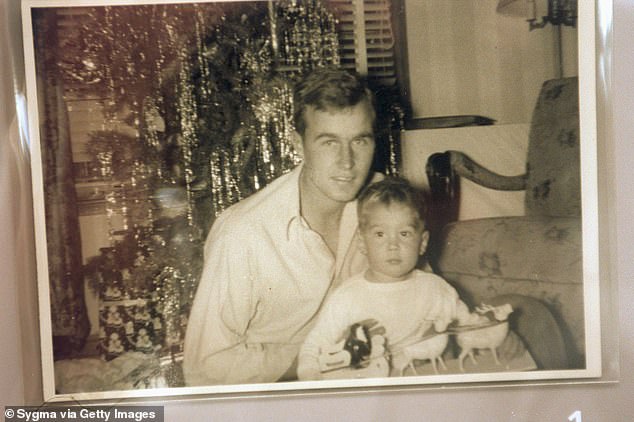 Journalist Peter Baker said in the documentary: ‘At each stage he’s following his dad’s footsteps, each state never as successful as his dad’ (The father and son are pictured together in an undated photo)

His father George H.W. Bush was a war hero who rose through the Republican party to become the 41st President; in contrast Bush had been a ‘screw up’ and New York Times journalist Peter Baker says there was a ‘seething resentment’ against his father.

It boiled over during the Christmas holidays of 1972 when Bush crashed into a neighbor’s garbage can after drinking.

In the ensuing row he challenged his father to a fight, and for the rest of his life saw him as a rival as well as somebody whose approval he craved.

After graduating from Yale, Bush could no longer avoid the Vietnam draft so joined the 147th Texas Air National Guard along with other well-connected Texan boys.

The joke about the unit was that they would only see action if Oklahoma invaded Texas – critics branded it a ‘Champagne Unit’.

Journalist Bill Minutaglio tells the film: ‘In his heart of hearts Bush didn’t want to go to Vietnam but he knew damn well that his father’s next step had been to join the military and become a war hero.’

After Bush went into the oil business but never struck liquid gold, and he ended up selling his business, Arbusto, which rivals joked should be called Arbust-o.

As Baker says in the film: ‘At each stage he’s following his dad’s footsteps, each state never as successful as his dad’. 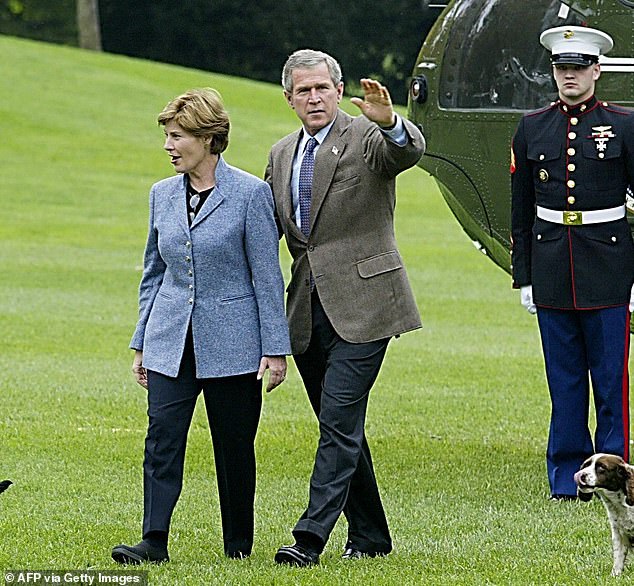 After quitting alcohol and becoming religious, Bush ran for governor of Texas, helped by Rove who ‘saw something’ in him before anyone else did.

‘He saw this was a ruggedly handsome guy who could be groomed for something great.’

‘American Experience’ has a revealing anecdote from Rove about the night that Bush won his election and his brother Jeb lost the race to be governor of Florida.

Jeb had been seen as the family’s political heir, not Bush who had always been the black sheep of the family.

Rove describes how Bush called his father who was having a ‘meltdown about Jeb losing.’

His father was so upset about this that Bush had to remind him: ‘Well dad, I won.’