It may be one of the most devastating sustained bombing campaigns in history, but Hitler’s Blitz was not the first time Germany threatened Britain from above.

During the First World War Kaiser Wilhelm launched Zeppelin raids with bombs ripping apart communities and killing around 500 people in Britain between 1915 and 1918.

New colourised photos have shed new light on those attacks and the damage done to the buildings and people below.

Images show the destruction caused by successful Zeppelin bomb raids over London, as British soldiers are pictured searching for survivors from the wreckage.

Although the Kaiser had banned bombings on London initially because it may have threatened his relatives in the Royal Family, he did sanction attacks on industrial targets.

Before Hitler launched the Blitz in the Second World War, Germany used Zeppelins in bombing raids on Britain 20 years earlier, beginning in 1915. The behemoths were responsible for the deaths of 500 people in the UK between 1915 and 1918. They were difficult to engage early on because they flew higher than fighter planes could reach to attack, were well armoured  and they were almost impossible to spot at night. But eventually fighter technology improved and British planes were able to regularly shoot them down. Pictured here is a Zeppelin crashing off the coast of Norway 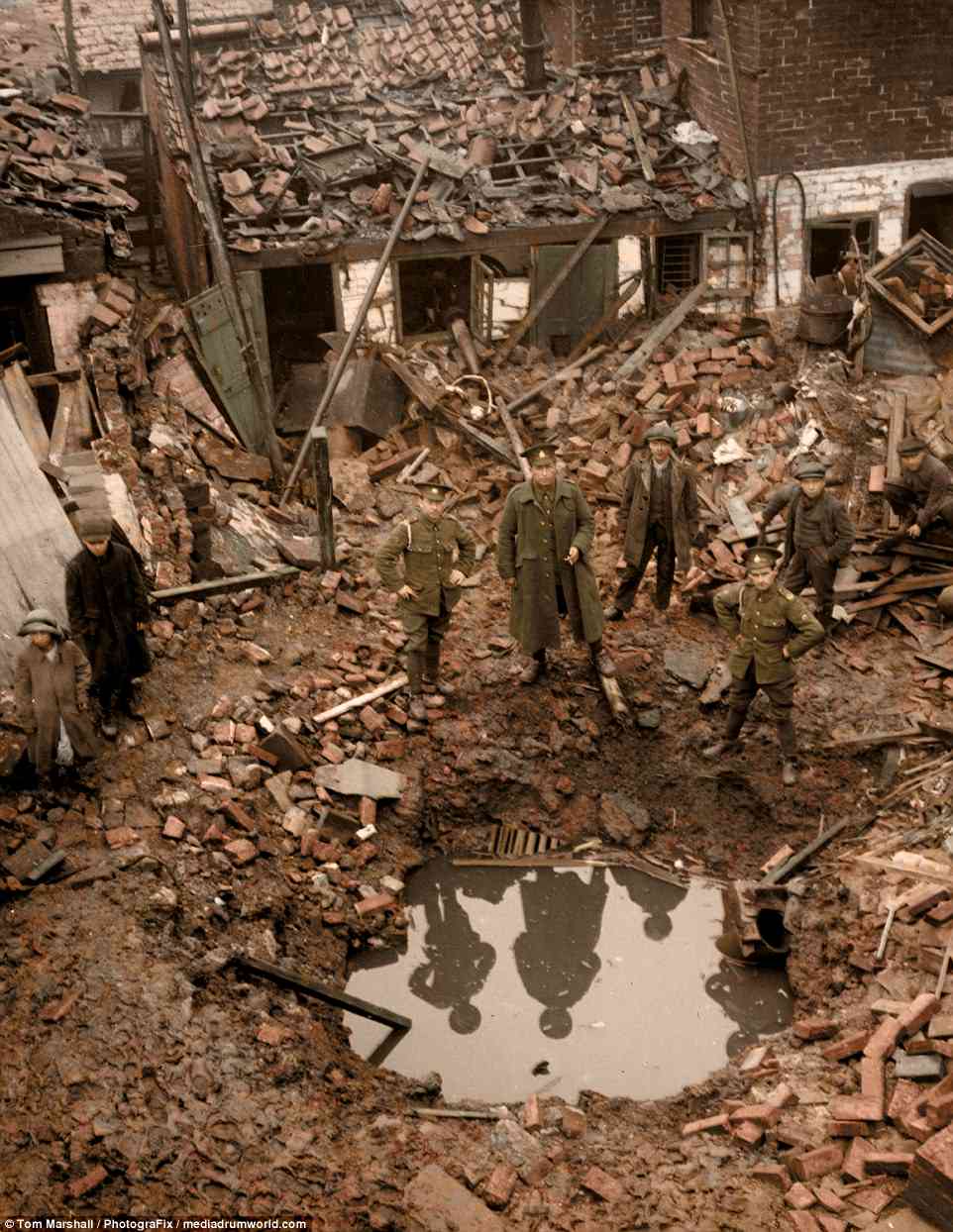 Zeppelins were capable of great devastation, as pictured here on a raid in England where soldiers are seen standing above a huge crater caused by the bombings. Wreckage is strewn around the ground and nearby buildings have been damaged with bricks and roof tiles blasted apart Another image shows a large sunken hole in the ground where a Zeppelin bomb tore through the earth, creating a deep well filled with rubble and debris.

Military personnel and civilians are seen beside the hole as they survey the damage of yet another raid against Britain.

They also include the wreckage of a damaged L20 Zeppelin aircraft after it crashed into the sea off the coast of Norway.

This airship was known as the ‘Raider of Loughborough’ after being involved in an attack on the Midlands and the aircraft’s passengers can be seen sailing away from the wreckage as they fled to the shoreline.

One photo depicts a female munitions worker busy in a factory in 1915, before they became a key target for bombing.

The incredible shots were colourised by British professional colouriser Tom Marshall of PhotograFix.

He said: ‘Zeppelins were like no other weapon ever encountered before. They were impossible to spot in the night sky, they flew higher than any British aeroplanes could reach, and were out of range of any guns. 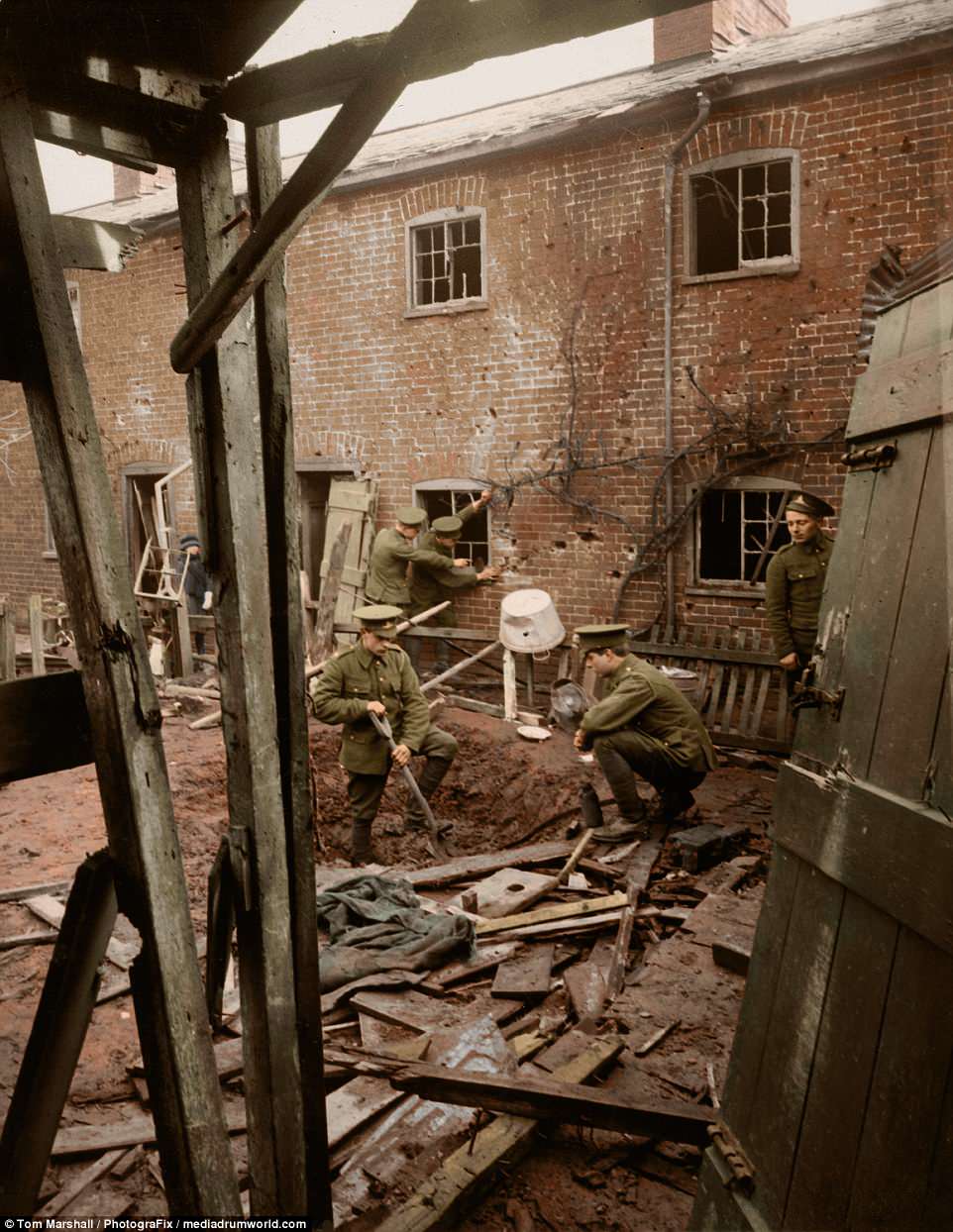 Soldiers at home would regularly have to clear away the wreckage from the attacks, which began in Norfolk in January 1915 and continued into 1918. These soldiers are pictured using shovels to clear away wood that has splintered or been blown apart in explosions as they look for survivors and make the area safe for residents Meanwhile the colourised photos also show women hard at work for the war effort in munitions factories making shells for artillery guns on the front lines. But munitions workers also knew they were taking their lives in their own hands after Kaiser Wilhelm began targeting them in Zeppelin raids to try to damage the British war machine

‘They were the height of luxury travel before the war, but nobody imagined the death and destruction that airships could bring to Britain’s streets during World War One.’

The first Zeppelin raid on British soil was between January 19 and 20 in 1915 over Norfolk, where two Zeppelins killed four people and injured six in attacks on Great Yarmouth, King’s Lynn and Sheringham.

The targets were chosen purely because of the wind after the air ships had originally been sent to attack Humberside only to be blown off course.

From this, the Kaiser authorised bombings on London to happen in February, however these were then postponed until April due to poor weather.

Raids were further delayed until the larger and more advanced P Class Zeppelins were available, which culminated in the first London bombings on May 31, 1915.

The fatal raids at the end of May in 1915 were commanded by the German officer Viktor Leopold Linnarz who ordered an LZ 38 airship to drop explosives over the capital.

A total of 120 bombs were dropped from Stoke Newington to as far south as Stepney and as far north as Leytonstone.

Seven people were killed and thirty-five were injured in these raids which burned down seven buildings.

The first ever building bombed in London was 16 Alkham Road in Stoke Newington, but no one was seriously injured.

The damage from this one day of raids was estimated to have cost the government more than £18,500, the equivalent of approximately £2million today.

Although the RAF would themselves fending off Second World War bombings, 20 years earlier fighters were unable to climb high enough to mount a defence. Pictured is the aftermath of a Zeppelin raid where a tree has been partially stripped and windows have been smashed as soldiers survey the damage. Zeppelin raids were initially banned in London by the Kaiser because he feared they may threaten his relatives in the Royal Family, but he later changed his mind and sanctioned attacks on industrial targets. However, many raids ended up missing their targets altogether because of difficulty with the weather and navigation A family are pictured holding a fragment of a bomb after a Zeppelin attack, surrounded by bricks sent flying by the raid. Zeppelin attacks continued until August 1918, by which point Germany had started using bomber planes because they were more reliable. Zeppelins had also become something of a death trap for their crews because they had no parachutes when they were shot down The Daily Mail even launched a fund during the bombing campaign to support victims of the raids, paying compensation to families of those who lost loved ones and to those injured or who lost their homes or property in the attacks

Even when pilots could engage with the enemy the Zeppelins were too well armoured and sustained little damage.

They were also somewhat unreliable, with many missions falling by the wayside while in progress because weather changes meant the air ships could not reach their targets.

The development of the Zeppelin airship was first pioneered by the German Count Ferdinand von Zeppelin in the early twentieth century, and were they first flown commercially in 1910.

Zeppelins used an aluminium framework which held multiple gasbags inside which contained the inflammable lifting gas.

During the First World War, the German military made use of the power of Zeppelins by using them as bombers and scouts, killing over 500 people during the numerous bombing raids against Britain.

The Zeppelin raids over London on May 31st forced the British government to issue a D-notice which prohibited any UK press outlets from reporting anything about the raids which wasn’t mentioned in official statements.

In 1921 the Allied Powers requested that Germany hand over all Zeppelins in reparation for the devastation they caused during the war.