How high blood pressure can give you dementia

Sue Thorne’s husband, Peter, was just 63 when he first started to show signs of dementia. ‘Peter took voluntary redundancy from a stressful job as a town planner in 2010 and we were thoroughly enjoying retirement,’ says Sue, 66, a school secretary.

But in early 2015, it gradually became clear that everything wasn’t quite right.

‘I’d say something about a TV programme we’d been watching, and Peter’s reply would be totally unconnected to what I’d just said,’ recalls Sue, who lives in St Saviour on the island of Jersey.

Correlation: Years of uncontrolled high blood pressure battering the walls of arteries that feed the brain cause them to rupture or leak — and become blocked by clots

‘When I mentioned my worries to Peter, he told me he was anxious, too. He couldn’t work out what coins he needed when he was buying a newspaper.’

Peter saw his doctor and was referred to a memory clinic, but in the weeks before the appointment, his problems took a turn for the worse.

In May 2015, he had surgery for a hernia — and the night after the operation, he had a stroke that left him temporarily paralysed on his left side. After this, it soon became clear that his memory problems had worsened.

‘His thinking was suddenly much more confused,’ recalls Sue. ‘I hoped that he would recover his mental faculties in the same way as he was recovering physically. But it didn’t happen.’

In January 2016, tests confirmed Peter had the disease that many of us now fear more than cancer: dementia. Despite billions spent on research, a cure — let alone a treatment to halt the disease — remains elusive.

Yet could the answer be as simple as controlling your blood pressure? Although we tend to associate high blood pressure (or hypertension) with heart attacks and strokes, new evidence suggests it’s also linked to dementia.

The findings could mean thousands of people avoid dementia by keeping their blood pressure at a healthy level — by exercising regularly, maintaining a healthy weight and, if necessary, taking blood pressure pills. 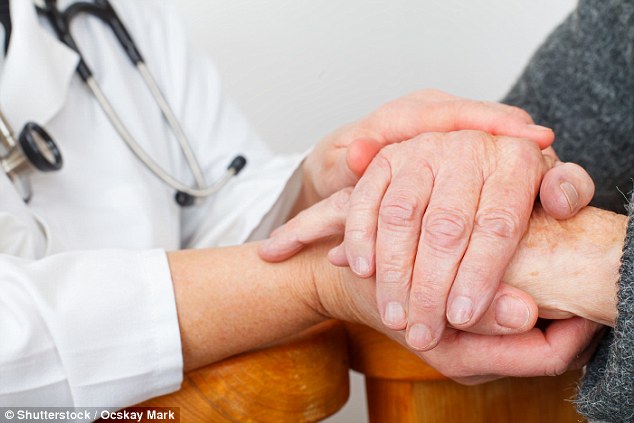 Fact: Vascular dementia affects about 150,000 people in the UK and is caused when blood vessels supplying the brain become blocked or narrowed, often after a stroke

Most people with dementia have Alzheimer’s, a form of the disease widely regarded as being due to a build up of toxic proteins in the brain that form plaques and tangles, preventing nerve cells from communicating and leading to a loss of brain tissue.

New research suggests high blood pressure could also be a factor in Alzheimer’s.

Until now, blood pressure has been known to cause vascular dementia, the type that Peter has (he was also diagnosed with high blood pressure at the age of 41).

Vascular dementia affects about 150,000 people in the UK and is caused when blood vessels supplying the brain become blocked or narrowed, often after a stroke.

Now, however, the evidence suggests that uncontrolled blood pressure is also a major factor in Alzheimer’s, and that controlling it may help prevent the disease.

New research, reported at the Alzheimer’s International Conference in Chicago, found that older people (average age 67) with normal blood pressure (a systolic reading of 120 or less) are ‘significantly’ less likely to develop mild cognitive impairment — a precursor to full-blown dementia. The researchers from the Wake Forest School of Medicine in North Carolina monitored cognitive ability over four years in people with well-controlled systolic blood pressure compared to those with higher readings (140 or more).

Those with well-controlled blood pressure were 19 per cent less likely to develop mild cognitive impairment by the end of the trial.

Dr Maria Carrillo, chief science officer at the Alzheimer’s Association in the U.S., said: ‘This study shows more conclusively than ever that there are things you can do, especially regarding cardiovascular disease risk factors, to reduce your risk of dementia’.

In June, another study had an even more powerful message, this time for the middle-aged. Research in the European Heart Journal showed that people with a systolic reading of 130 or more (regarded as moderately high) at the age of 50 are 45 per cent more likely to develop dementia in old age.

‘We have a new understanding of the importance of mid-life hypertension on brain health,’ says Professor Archana Singh-Manoux, a research fellow at University College London, who led the study. ‘The damage is done slowly — so what counts in terms of dementia is the duration of exposure to high blood pressure.

‘Our study shows that raised blood pressure at 50 is linked to dementia, but that’s not the case in your 60s or 70s — when it no longer matters so much.’

The studies are adding to previous evidence that suggests controlling blood pressure is one of the best things you can do in middle age for overall health.

‘Yes, watch your diet, weight, exercise levels and cholesterol levels,’ says Dr Adam Greenstein, a consultant hypertension specialist at Manchester Royal Infirmary. ‘But the most important factor is your blood pressure. The brain relies on an efficient blood supply in the same way the heart does.

In the UK, your blood pressure is considered ‘high’ if the reading is 140/90 or over — the first number is the systolic reading, which measures pressure when the heart contracts, pushing blood around the body.

But that threshold could soon drop to 130. In the U.S. and Europe, a reading of 130 or more is now considered ‘high’ following authoritative research by Harvard Medical School, published last year in the New England Journal of Medicine. It’s thought that here, the National Institute for Health and Care Excellence (NICE) is likely to amend its advice next year to bring the UK in line with this thinking.

But there are concerns that lowering the threshold means otherwise healthy people may end up overmedicalised, as it’s predicted the number of people taking blood pressure pills will rise from a third to half of adults, with the greatest increase in those in their 30s and 40s. Already, heart experts are lining up to oppose the change.

In July, the British Heart Foundation’s associate medical director, Professor Jeremy Pearson, was one of many pointing out that ‘the appetite for this change will be slender’, arguing that it makes more sense for doctors to treat those whose readings remain above 140.

However, will the new evidence of a link with dementia bring a greater appetite for controlling blood pressure?

‘So when you read a newspaper article or try to recall where you parked your car, for example, the particular part of your brain responsible for that activity becomes metabolically active, with nerve cells communicating effectively for you to be able to undertake that task,’ he explains.

‘For that to happen, the arteries feeding that part of the brain need to widen immediately to allow extra nutrient-rich blood to be delivered and provide the extra energy it needs,’ he says.

Years of uncontrolled high blood pressure battering the walls of arteries that feed the brain cause them to rupture or leak — and become blocked by clots. ‘This is how different parts of the brain stop working so we can no longer remember words or where we parked the car or how to read a newspaper,’ says Dr Greenstein.

‘It now looks as though vascular dementia is more common than previously thought, and that high blood pressure damages arteries feeding the hippocampus, the brain area involved in memory that is damaged in Alzheimer’s, he adds.

This could explain why a series of ‘breakthrough’ drugs — including donepezil, rivastigmine, and memantine — widely predicted to cure Alzheimer’s by clearing the build-up of poisonous proteins, have failed to do so.

At best, these drugs merely slow down deterioration. ‘The truth is that every drug that’s been touted as a treatment that will reverse dementia has failed,’ says Tony Heagerty, a professor of medicine at the University of Manchester.

Yet Dr Aoife Kiely, research officer at the Alzheimer’s Society, says that while there’s evidence that high blood pressure can increase the risk of Alzheimer’s, ‘it still has to be shown whether it causes Alzheimer’s or not’.

A better understanding of this association could soon emerge with a study planned at the University of Manchester involving 41,000 people aged 70.

‘It’s at about the age of 70 that people start to show signs of dementia, and we will be able to confirm quickly if there is a benefit in intensively reducing blood pressure in this older age group,’ says Professor Heagerty, who is leading the trial.

In April, Peter Thorne had to move into long-term care because living at home was no longer possible.

‘We found great support in living day-to-day, but there is so little that can be done for people like Peter,’ says his wife, Sue.

The hope is that the new blood pressure research might lead to fewer such heartbreaking cases.