How indigenous students get $2,470 extra a year from taxpayers to go to university

An examination of Australia’s welfare system shows indigenous people are entitled to an extra $2,500 a year for their studies.

They can even claim a $4,500 relocation allowance to move to a bigger city.

Indigenous groups have accused One Nation’s New South Wales leader Mark Latham of racism, after he demanded Aboriginal welfare recipients be DNA tested in a bid to stamp out welfare fraud.

Students claiming Aboriginal or Torres Strait Islander heritage are entitled to $550.20 a fortnight if they are 22 or older and have no children, under the Abstudy scheme.

However, non-indigenous Australians without children receive $455.20 a fortnight if they qualify for Austudy.

This $95 difference means an Aboriginal person can claim $2,470 extra a year from taxpayers to study for a degree or a diploma.

Indigenous Australians are entitled to an extra $2,500 a year for their studies and can even claim a $4,500 relocation allowance to move to a bigger city (stock image)

The National Congress of Australia’s First Peoples slammed One Nation’s call for Aboriginal welfare recipients to be DNA tested to ensure at least one of their grandparents was a full-blooded indigenous person.

‘We, as Aboriginal people cannot be defined by our DNA, this proposal has no merit to Aboriginal communities and is more of a vote grabbing by One Nation,’ the group’s chief executive Gary Oliver told Daily Mail Australia on Tuesday.

Mr Oliver added Aboriginality was based on community acceptance and not just genetics.

‘We, as a nation, need to understand that being an Aboriginal person is a matter of pride,’ he said. Students claiming Aboriginal or Torres Strait Islander heritage are entitled to $550.20 a fortnight if they are 22 or older and have no children, under the Abstudy scheme (pictured are Yolngu clan members from Arnhem Land in the Northern Territory)

‘It is dangerous to take this acknowledgement and acceptance and tie it to a process outside of community control, where acceptance and love come from elders of the community.’

Indigenous students younger than 22 on Abstudy get $455.20 a fortnight, the same as similar Austudy recipients with no children or a partner.

This is $95 more than an equivalent Austudy payment of $455.20 for single, non-indigenous students without children. This fortnightly gap adds up to $2,470 a year.

Fortnightly Abstudy rates rise to $595.10 for indigenous students over 60.

Benefits are paid during semester breaks, provided someone remains enrolled, and only fall if a recipient earns more than $437 a fortnight.

Indigenous students relocating for their study from a regional or remote area are entitled to a $4,553 payment for their first year of study.

Australians for Native Title and Reconciliation’s national director Paul Wright said One Nation’s DNA testing proposal was ‘a racist policy that takes us backwards 100 years’, adding there was ‘no evidence of widespread rorting’.

Mr Latham on Tuesday has doubled down on his call for indigenous welfare recipients to be DNA tested to ensure only those who were at least one-quarter Aboriginal could qualify for special benefits.

‘They are ripping off the system and denying genuine indigenous in genuine need full access to these schemes.’

ANTAR said education was a ‘core social determinant of health’ and argued specific welfare programs for indigenous people were designed to address historic discrimination and the horror of the stolen generations. 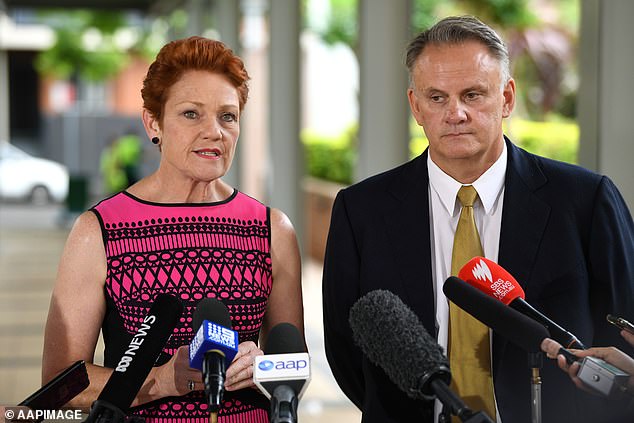 Despite criticism from the Greens and indigenous groups, Mr Latham said DNA testing was necessary to stamp out fraud.

‘My policy for DNA ancestry testing will get rid of the rorters and ensure Aboriginal welfare is not wasted on non-Aborigines,’ he said.

‘Any dollar wasted in the welfare system is a dollar too many,’ he said.

Non-indigenous Austudy recipients without children or a spouse can only receive up to $553.10 a fortnight, which is slightly more than Abstudy, if they have previously been long-term unemployed.

Indigenous students, however, do not get an increase to their Abstudy payments if they have been jobless for a long period.

Abstudy and Austudy payments only decrease when someone earns more than $437 a fortnight. Australians for Native Title and Reconciliation’s national director Paul Wright said One Nation’s DNA testing proposal was ‘a racist policy that takes us backwards 100 years’, adding there was ‘no evidence of widespread rorting’ (Yolngu people from Arnhem Land pictured)

The payments continue during semester breaks until they graduate or drop out of a course.

The Australian government also offers $4,553 relocation scholarships for indigenous students in their first year living away from home.

Aboriginal students moving from a regional or remote area to study are eligible for $2,278 in their second year and $1,138 annually after that.

Indigenous people moving from a major city to a regional area can also claim $4,553 in their first year to move away and $1,138 every year after that.

While the relocation scholarship is specifically for indigenous students, non-Aboriginal students on the Youth Allowance can only claim relocation benefits if they are an orphan or have a child that depends on them.

Sydney 2GB radio announcer Ray Hadley has criticised Mr Latham for focusing on a federal issue, even though he is running for a NSW upper house seat at the March 23 state election.

‘There are a vast number of NSW and Commonwealth special land council, education, employment and housing schemes reserved for indigenous people,’ he said.

A special benefit for indigenous students has existed since 1969, two years after a referendum passed with 91 per cent support giving the Commonwealth the power to make laws for Aboriginal and Torres Strait Islanders.

‘The purpose of the Abstudy scheme is to address the particular educational disadvantages faced by Aboriginal and Torres Strait Islander people by improving educational outcomes to a level equivalent to that of the Australian population in general,’ a Department of Social Services policy manual said.

The department added the means-tested scheme was designed to encourage indigenous students and apprentices to ‘take full advantage of available educational opportunities and improve their employment opportunities’.

Apart from more generous student welfare benefits, Aboriginal people get preferential treatment when applying for jobs in the public service or within the ABC and SBS.