Walk inside and suddenly you’re immersed in a forgotten Australia, a place where the layers of political correctness that have gradually built up across the nation are rolled back to reveal that the country’s ocker heart still beats strong – if you know where to look.

The wardrobes and language are straight out of the ’70s and ’80s, health and safety regulations are for mugs and grown men volunteer to get punched in the face by professional fighters. 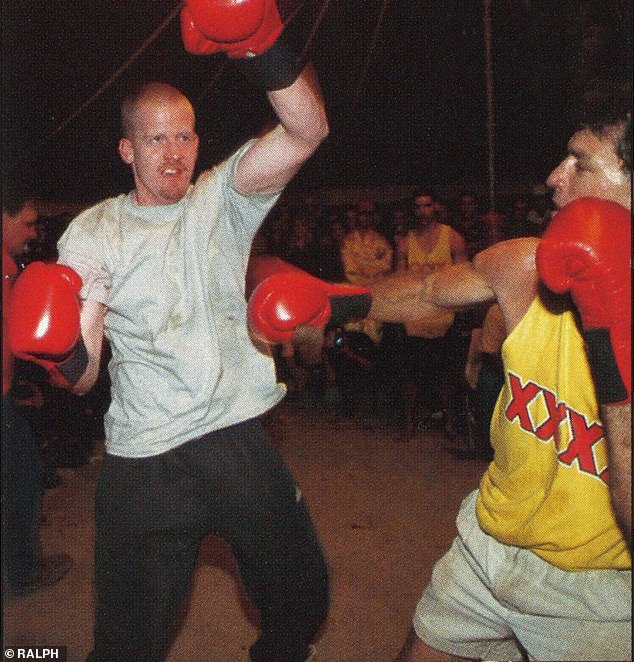 Budgen is pictured just after copping a right hand from Brophy’s heavyweight fighter, nicknamed ‘The Friendly Mauler’, who’d had more than 500 bouts in the tent

The editor of the monthly magazine I worked for sent me to the Mount Isa Rodeo, about 1,500 kilometres north-west of Brisbane, with strict instructions to get my face rearranged by one of Fred’s troupe of boxers.

Brophy is a fourth-generation showman, and his travelling fistic circus is the last of its kind in the world. There used to be many of them in Australia but red tape whittled them away until only Fred’s remained standing. He takes his show to big events in the outback and when he arrives, it’s like the circus is in town.

A fighter himself since the age of five or six, he gave me a short history of his family business in a voice that sounded like it was coming from the bottom of a gravel pit.

‘I fought in tents all my life until a bloke shot me with a double-barrel shotgun. I’ve got 85 shotgun pellets in that leg there [his right] and 17 in that leg. I gave a bloke a hiding in the tent and he shot me,’ Fred explained.

‘Whenever there’s a boxing tent anywhere I’ve been, there’s no blues or fights around the streets. This stops the fights, and that’s why the police love it.

‘We don’t fight with a ring, we fight with a mat, and the people are the ring. I’m not gonna change my rules or ring or boxing tent in any way, shape or form for any f***ing politician or bureaucrat in Australia.’

About those rules: Fred doesn’t allow his boxers to fight outside the tent, so if they have a stoush in a pub, they’re out. 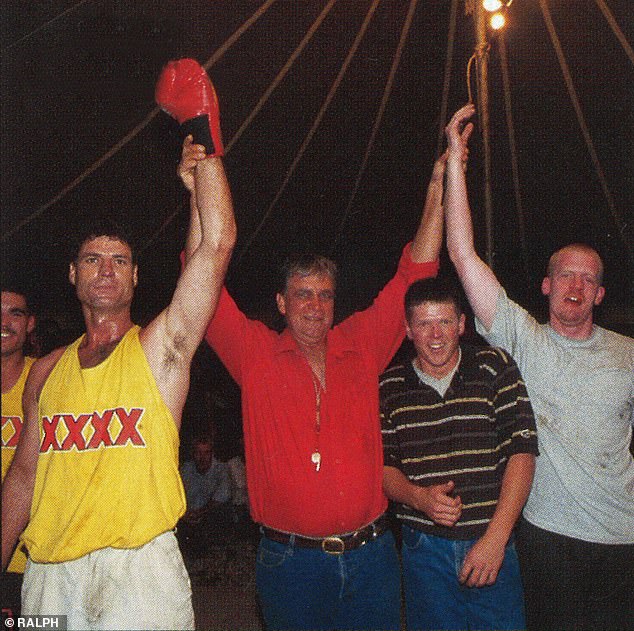 Bugden was paired with mine worker Ron Rowe for a tag-team fight with the Friendly Mauler and his son, Kid Quick. Fred Brophy was nice enough to call the fight a draw (Pictured from left to right: Kid Quick, Glynn ‘The Friendly Mauler’ Johnston, Fred Brophy, Ron Rowe, Shayne Bugden)

And everyone pays to get into the show unless they volunteer to fight one of Brophy’s pugs. Anyone who puts their hand up – women and even children included – has to get up on the platform that’s erected outside the tent and have a bit of a chat to the man himself.

He literally drums up business by standing up there, hammering away on a big bass drum and introducing his fighters, followed with a cry of, ‘Give ’em a rally!’ after each one.

If he picks you out of the crowd, you have to pass a sobriety test that involves walking the platform without staggering, because drunks aren’t allowed to pull on the gloves. A few questions from Fred, including the vaguely threatening, ‘Do you know where you are?’ and inside you go with about 100 people who’ve just paid to watch you get beaten like a gong. 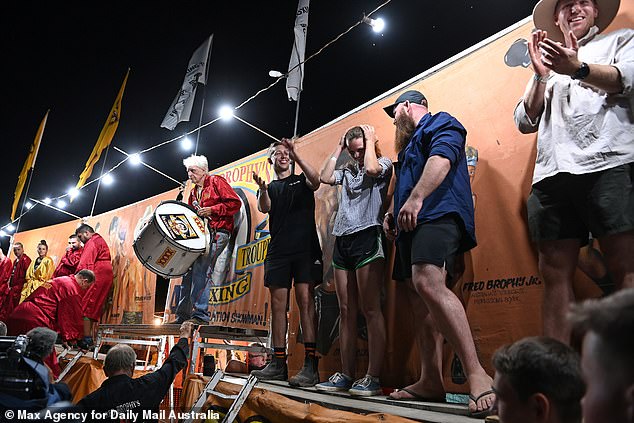 Fred Brophy (centre, in red shirt) literally drums up business outside his tent at the Birdsville Races in April this year. His fighters are in gowns on the left, the brave souls who’ve volunteered to cop a beating are on the right 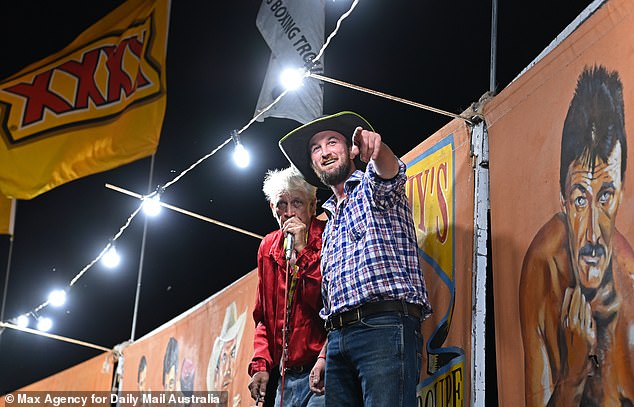 Fred has a chat to all the punters who want to pull on the gloves and gives them a sobriety test, as you’re not allowed to fight if you’ve had a few too many

Fred makes the matches, pairing you off with one of his employees according to your weight, age, and how tough his practised eye thinks you are.

Back when I had a crack, he had a wide variety of boxers to call on. There was Papua New Guinean puncher Richard Grant-Iramu, who Fred dubbed ‘Afro Savage’. The heavyweight and undisputed leader of the troupe was outback legend Glynn ‘The Friendly Mauler’ Johnston, then there was quiet young bloke Paul ‘Gentleman Jim’ Bennet, and Johnston’s teenage son, who hit me so hard I can only recall him by his ring name, ‘Kid Quick’.

When I asked Fred how he came up with the fighters’ handles, he explained, ‘I just think of it when I look at a bloke. I’d call you The Tasmanian Tiger because you look Tasmanian.’ I took that to mean he thought I was inbred.

Then he glanced at the photographer who came with me from Sydney, who wore glasses, and said, ‘I’d call you The Professor.’ 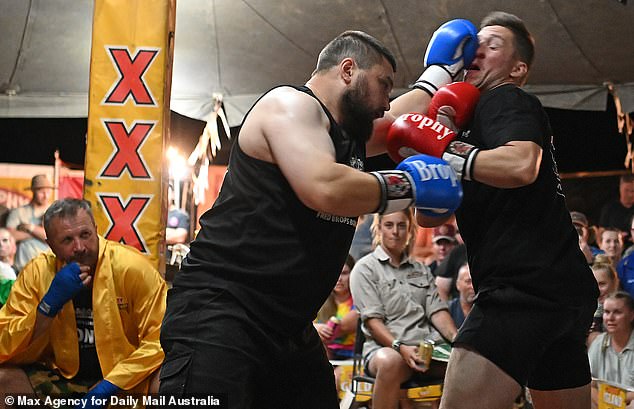 That’ll leave a mark: One of Fred’s fighters gets through with a left in Birdsville this year… 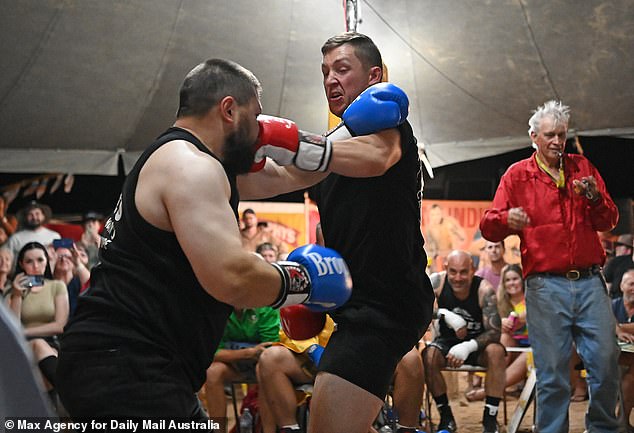 …then gets a left back for his trouble. Fred appears to actually be using a stopwatch in this photo – when Daily Mail Australia’s man fought in Mount Isa two decades ago, the Aussie boxing icon just carried a 50-cent piece 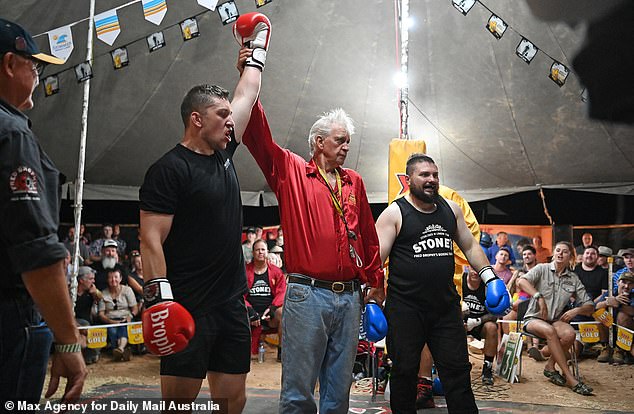 The winner is announced to the crowd. If you beat one of his fighters, Fred will give you some money – and possibly a job offer. He’s found more than a few employees by watching them beat one of his pugs

Rounds are supposed to be three minutes long, but in reality, they’re anything but. Fred will make a show of checking his stopwatch during bouts, but when I looked closely I discovered it was a 50-cent piece.

There was no headgear and the gloves were a fair bit shy of the nicely padded 16-ounce numbers used in most pro fights, so when you got hit, you stayed hit.

You get a wide variety of skill levels among the volunteers, from blokes and women who swing wildly like they’re brawling in a pub car park, to slick boxers Fred’s men call ‘snags’ because they’re trouble, and a few who just cover up and try to survive.

As for me? I was the journalist who proved his questions were harder than his punches.

Fred put me together with a mine worker named Ron for a tag-team fight with the Friendly Mauler and Kid Quick. The photographer made me pose for a shot in front of the crowd just before the bout and I was booed and hit with a wave of unprintable abuse for being a show-off. Then away we went. 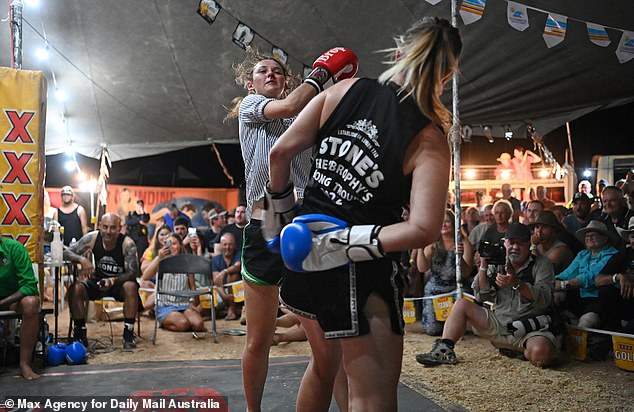 Brophy’s boxers don’t mind a bit of showboating. Here one of his fighters puts her hands behind her back and slips her opponent’s punches to the delight of the crowd 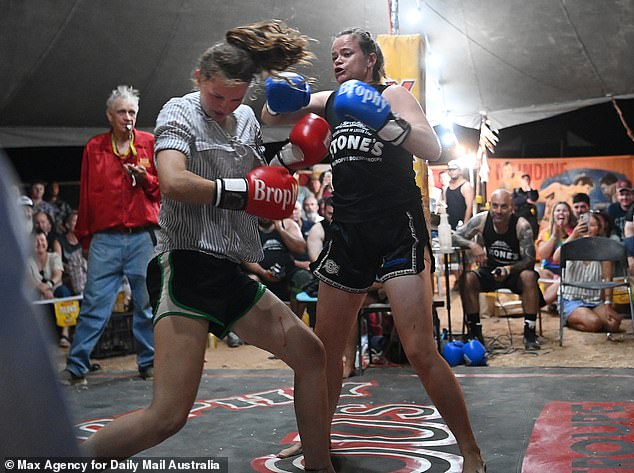 The women go just as hard as the men – and in some cases, harder. Back in 2001, Daily Mail Australia’s man even saw two kids fight in the tent

Friendly touched my glove with his left, the boxer’s way of shaking hands, then curled his right fist up behind him like a scorpion’s tail.

I looked at it. He slammed his left fist into the bridge of my nose. He curled it up again. I looked again. You can guess what happened.

In boxing parlance, getting on your bike means you use your footwork to stay out of punching range, and I was riding the Tour de France. It didn’t work for long. After a combination to the head left me dizzy, I tagged Ron in.

On my next turn I actually landed a punch on Friendly. It wouldn’t have put a hole in a piece of fairy floss. He responded with one of his tricks, the ‘buffalo horns’, where he threw both fists into my head simultaneously in a pincer motion. One big right hand later and I was skidding across the mat, bloody-mouthed, watching Fred walk over to count me out.

I got up. I don’t know how. The rest of the fight was a blur of red leather smacking into my face but I distinctly recall getting crunched by a right hook from Kid Quick before, mercifully, it was all over. Ron and I were awarded a very undeserved draw.

I will never forget the way I felt when Fred called time. Nothing could touch me. I’d been in with a man so famed for his knuckle work that he was like a movie star in some parts of Australia’s red heart, and I’d come out the other end – but only because he wanted me to. If a knockout was what he was after, it would’ve been over inside 20 seconds.

Sure, when I woke up the following morning my jaw had been punched so loose I couldn’t chew properly, but I didn’t give a damn. I’ll never experience anything like it again.

Fred’s tent has to be one of the only places on earth where you can see kids get paid to fight – as I did when Glynn’s 10-year-old son, the Micro Mauler, took on another boy his age. When the punching’s done, there’s no bad blood. People who were nailing each other minutes earlier shake hands, drink beer together and laugh like drains. It’s a bit like Uluru – 100 per cent Aussie, 100 per cent unique. 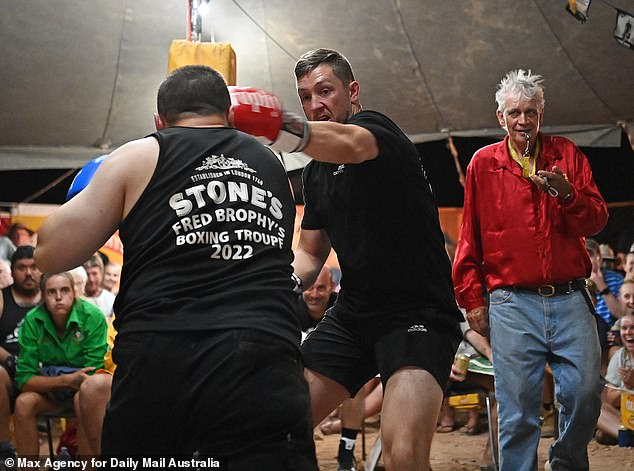 Boxing tents used to be big attractions at Aussie events. Midnight Oil even wrote a song about one of the most famous of them, Jimmy Sharman’s troupe. Now Fred is the last of his kind and he’s not about to change his ways for anybody

‘Our Australian way is – and this is how the tent came about – if you have a disagreement with someone, youse two get into it, sort it out, then you go off to the pub and have a beer. That’s it, shop shut, no animosity,’ the Friendly Mauler told me.

And he should know. Gentleman Jim reckons he’d had more than 500 fights by the time I faced him.

The photos you’re looking at were taken at Queensland’s Birdsville Races last weekend. Seeing them gave me a sense of deep satisfaction that Fred remains unbowed by the changing times. They also brought back a rush of great memories. Here’s one of the best.

The night after I fought, a bloke got knocked down and Fred gave him the count. Before he let him continue, he held up four fingers on his left hand and asked, ‘How many?’ The bloke replied, ‘Four!’ and Fred pointed to his little finger, which was amputated down close to the palm courtesy of that bloke with the shotgun, and said, ‘Nah! Three and a half!’

Then he let the fight go on. I hope it keeps going on for a long time yet.