The red carpet had been laid out along Hollywood Boulevard and a white canopied marquee protected its stars as they stepped past television cameras and radio microphones at the entrance to the Chinese Theatre.

And so, on August 27, 1964, the stage was set for the premiere of one of the quirkiest hits in Hollywood history – with dancing penguins, an infamously bad ‘cockney’ accent and a little-known leading lady in Julie Andrews.

Now, more than half a century of enchantment – and five Oscars – later, Mary Poppins is back, after a £150 million revamp which is expected to earn millions worldwide when it opens next month.

But while Dick Van Dyke and the penguins are set to make a welcome reappearance, along with the Banks family at the heart of the drama, Dame Julie Andrews is nowhere to be seen. Indeed, The Mail on Sunday understands that the 83-year-old British star was so determined to stay away from the sequel that she even turned down a $1 million offer from the producers to appear.

‘Everyone wanted Julie on board because she IS Mary Poppins,’ said a Disney source. ‘But even though there was talk of a million dollars on the table for her to make a cameo, she shut down all offers. She wasn’t interested in appearing, no matter how big a financial carrot was dangled in front of her.’

The new film, titled Mary Poppins Returns, is not intended to be a faithful remake.

Rather it is set 25 years after the original, at a time when London is in the grip of the 1930s Depression. Poppins, played by Emily Blunt, once again descends from the heavens dangling from her magical umbrella and returns to the Banks’ family home on Cherry Tree Lane to help former charges Jane and Michael, played by Emily Mortimer and Ben Whishaw, raise Michael’s three children after the unexpected death of their mother. 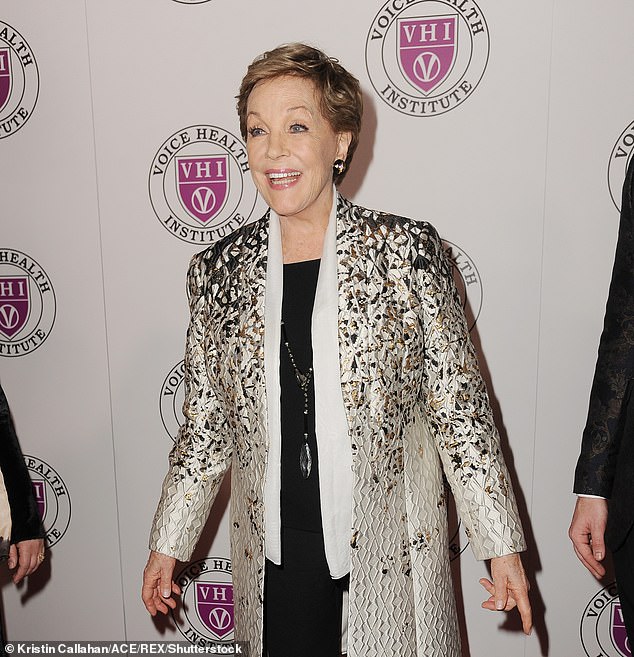 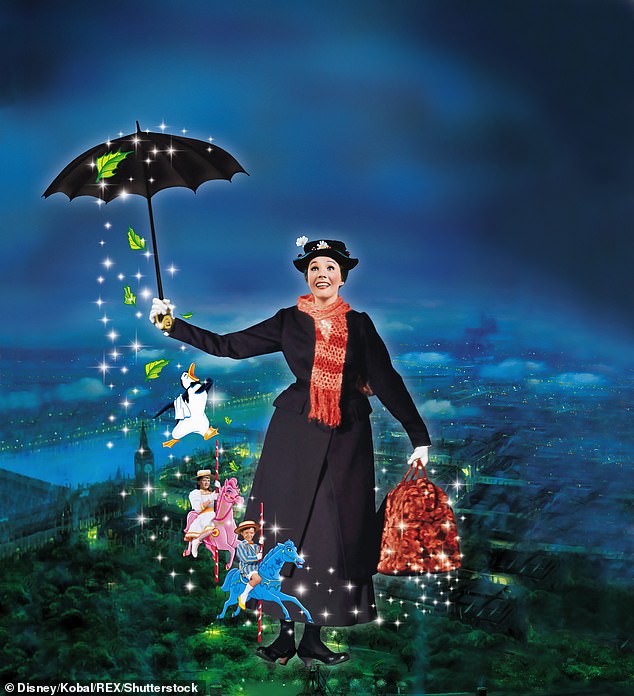 Andrews is pictured as Mary Poppins in the original. The new version is not intended to be a faithful remake

And the MoS can reveal that, while purists will doubtless complain, the new version is brimming with references to the original.

Even at the age of 92, sprightly Van Dyke jumped at the chance to play a cameo as the son of banker Mr Dawes.

He leaps on to a desk and tap-dances for three minutes in the sequel – and pulls it off flawlessly.

He recently apologised for his attempt at a Cockney accent in the original, where he played a chimney sweep, describing it as ‘the most atrocious accent in the history of cinema’.

He said: ‘People in the UK love to rib me about that accent. They ask what part of England I was meant to be from and I say it was a little shire in the north where most of the people were from Ohio.’

Van Dyke’s chimney sweep character has been ‘modernised’ into a gas lamp lighter called Jack played by Lin-Manuel Miranda who had a voice coach train him for months to ‘perfect’ a Cockney accent.

The famous animation techniques of the original Mary Poppins are also on view. In the 1964 film, the cast appear to ‘jump’ into chalk drawings on the pavement and emerge in a fantasy landscape where they dance with birds, butterflies, turtles and penguins.

In the new version, Disney’s animators return to traditional hand-drawn methods to recreate some of the film’s classic characters in a sequence intended to reprise the free-spirited original.

The dancing penguins are an animation of the outside of a Royal Doulton bowl. All are named after Hollywood legends – (Fred) Astaire, (Oliver) Hardy, (Cary) Grant and (Charlie) Chaplin.

Costume-makers, too, have played their part in reminding fans of the 1964 movie. Blunt’s version of the character has a tiny robin attached to her hat, in tribute to the chirping robins from A Spoonful Of Sugar. 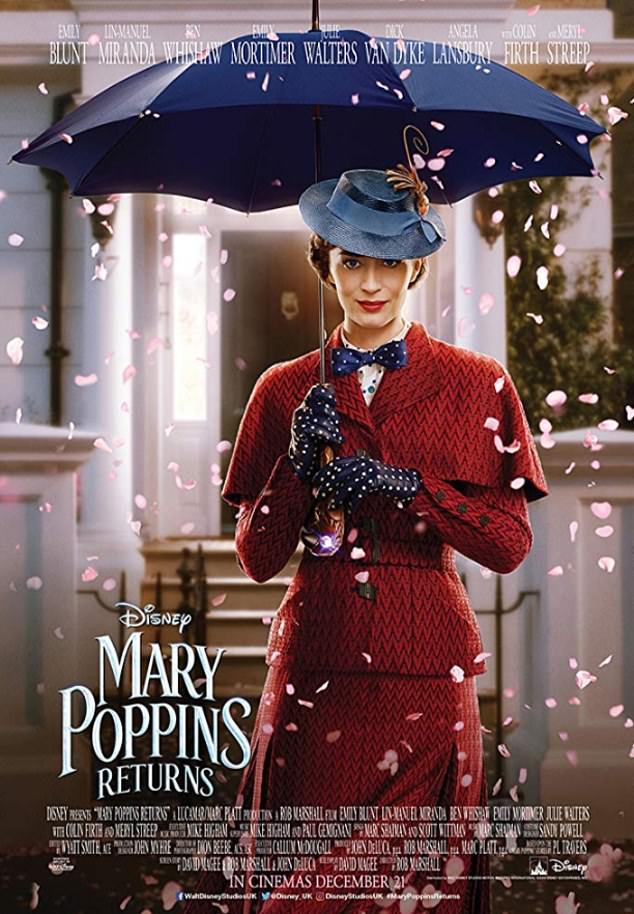 Streep, who has appeared in both Mamma Mia! movies, performs one of the film’s new songs, Turning Turtle, in which she raps hanging upside down from a chandelier.

The actors endured eight intense weeks of rehearsal where every step and note was perfected. Broadway composer Miranda, the creator and star of hit musical Hamilton, described filming the animated sequences as ‘terrifying’, saying: ‘The animators were given notes like, “The penguin is going to be heavier holding on to your cane, can you show us that?”

‘The highs were so high. Today we’re dancing with penguins, tomorrow we’re biking in front of Buckingham Palace. The adrenaline was pumping. You’re never coming back to Buckingham Palace to get a second take.’

So can the new film be as ‘practically perfect in every way’ as the original?

Certainly Disney believes so. Blunt was Marshall’s only choice for the role and it is one she has prepared for studiously.

She pored over the eight books by Australian novelist PL Travers on which the character of Mary was based, and discovered a new side to the nanny – one that is edgier, more caustic, very funny and ‘terribly vain’.

Her voice is ‘very English with a touch of the Queen’ and critics have already raved about her performance, described as ‘exquisite’.

Those on set when the movie was filmed at Shepperton Studios in Surrey, described the crew as dissolving into ‘floods of tears’ the first time Blunt ‘flew down’ in full Mary Poppins regalia – which is a defining part of the iconic opening scene in the original film.

And it was Van Dyke who put Blunt at ease. She describes how, before filming began, he grabbed her hand and started singing the much-loved Feed The Birds (Tuppence A Bag) song from the original film. Blunt recalled: ‘It made me feel at home. 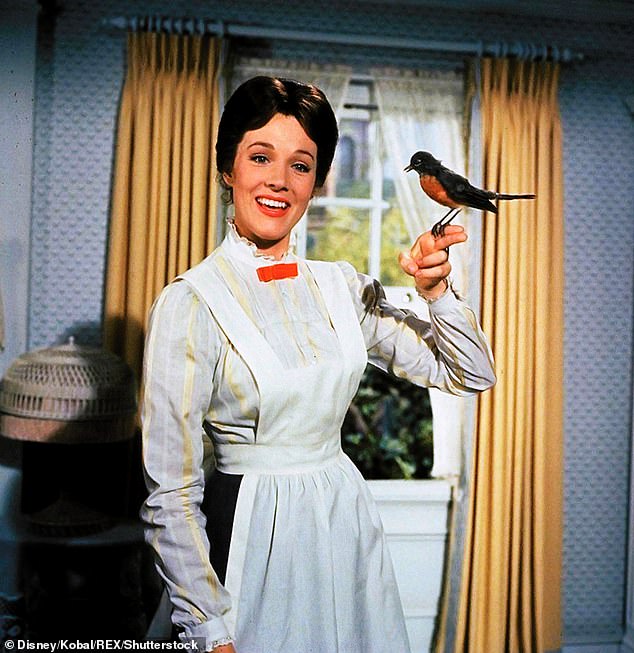 Declined: Andrews declined to appear in the sequel; seen here in the original Mary Poppins

‘When we shot the arrival scene from the skies, I was 50ft in the air and so scared. As I landed, one of the camera guys came up and said, “I got really choked watching you arrive there.” It reminded me people really need a film and a moment like this. Maybe we didn’t realise how much we wanted Mary to come back.’ And a Disney source said: ‘Mary Poppins is a crown jewel in the Disney empire. We didn’t want to mess things up. But this will introduce the wonderful world of Mary Poppins to a whole new generation.

‘It’s fun, it’s charming. Emily brings an edge to it, her own voice. The new songs are spectacular. Something magical happens on screen.’

The actors were chosen in part for their singing ability. Blunt, for example, was very nearly a pop star before she turned to acting.

Aged 18, and snapped up by an acting agent, her music teacher was simultaneously nudging her towards a singing career. A demo had been cut, and she had even signed a recording contract.

But, she told a newspaper, she was expected to be like Britney Spears – and that was not what she wanted to do.

She accepts her performance will be compared to Dame Julie’s much-celebrated ice-clear vocals. But Blunt said: ‘No one can out-Julie Andrews Julie Andrews. This is about presenting my version.’ 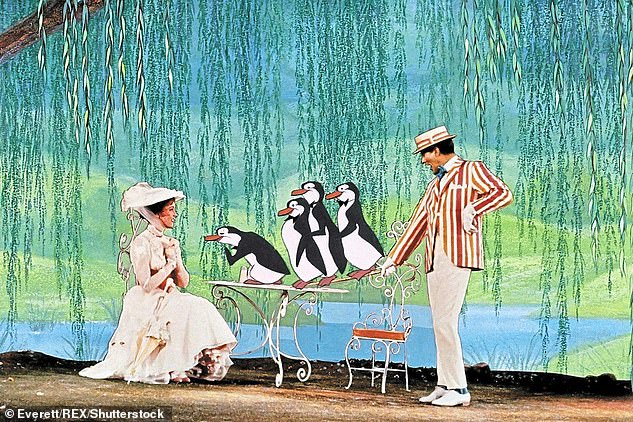 Julie Andrews and Dick Van Dyke in the original. Ninety-two-year-old Van Dyke jumped at the opportunity to appear in the new film in a cameo

The songs are new – with songwriters Marc Shaiman and Scott Wittman coming up with what Blunt describes as ‘instant classics’ including show-stopping tracks like Trip A Little Light Fantastic and Nowhere To Go But Up.

The original kite from the uplifting ending to the original film appears in the sequel. And the boat-shaped roof of Admiral Boom who lives next door to the Banks family and from which he twice-daily fires a cannon, is another detail considered essential to restore.

Sadly there is one member of the original cast who could not reprise his role. London-born actor Matthew Garber was just eight years old when he was picked from hundreds of boys who auditioned for the part of Michael Banks, but struggled to make the transition to adult star. He caught hepatitis during a trip along the ‘hippy trail’ in India, and died of pancreatitis in June 1977, aged just 21. 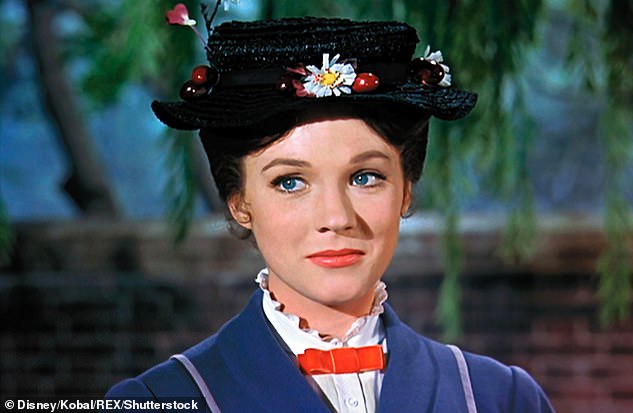 Andrews (pictured in the classic film) is said to have told director Rob Marshall that she was ‘one thousand per cent’ in support of the new film, and has lent her full approval to Blunt

As for Dame Julie, her singing voice was all but destroyed by throat surgery in 1997, but she has performed speaking roles since, many in animated children’s films such as Shrek and Despicable Me.

She is said to have told director Rob Marshall that she was ‘one thousand per cent’ in support of the new film, and has lent her full approval to Blunt as the new Mary.

She reportedly told Marshall: ‘This is Emily’s show. I don’t want it to be, “Oh, here comes that Mary Poppins”. I don’t want that.

‘I really want her to take this and run with it, because she will be brilliant. I know it’ll be cared for.’

A top-level Disney executive promised: ‘This is a Mary for a whole new generation. We hope fans of the original will bring their kids and grandkids – and we defy anyone to leave the theatre without a big grin on their faces.’