How Katie Couric humiliated Ashleigh Banfield at the 2000 Sydney Olympics

Katie Couric’s cattiness toward rival Ashleigh Banfield was on full display during NBC’s coverage of the 2000 Olympic games in Sydney, Australia.

Couric humiliated Banfield when she made her wait outside while Couric finished up an interview, continued to leave Banfield cooling her heels while Couric’s then nine-year-old daughter interviewed a guest for her school paper, and then mocked Banfield after she was scolded for asking an ‘off-limits’ question during an interview with Olympic Gold medalist Michael Johnson.

An NBC insider who worked with both Ashleigh Banfield and Katie Couric and saw everything unfold now tells DailyMail.com, ‘It was such a disappointing scene.’

‘Katie Couric caused that problem in Sydney and she used it to trash Ashleigh Banfield within the network. It was disgraceful,’ they added.

Couric has already given a taste of her ‘mean girl’ persona behind the scenes in her upcoming memoir ‘Going There’ where she wrote that she gave Banfield the cold shoulder early in her career because helping her would have been ‘self sabotage’.

But now DailyMail.com can reveal just how far the TV host went to remain on top.

Katie Couric humiliated Ashleigh Banfield at the 2000 Olympics in Sydney, Australia, while they both worked at NBC 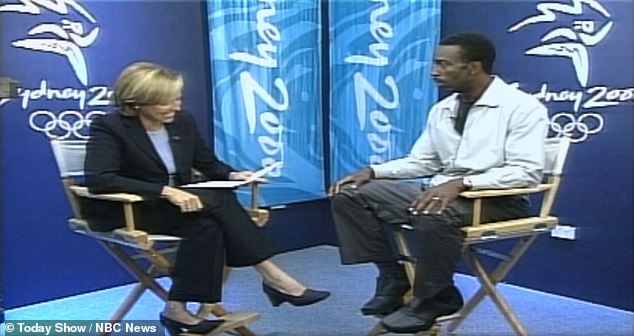 Both Couric and Banfield had interviews with Olympic Gold medalist Michael Johnson, but Couric made Banfield wait outside while she finished her interview 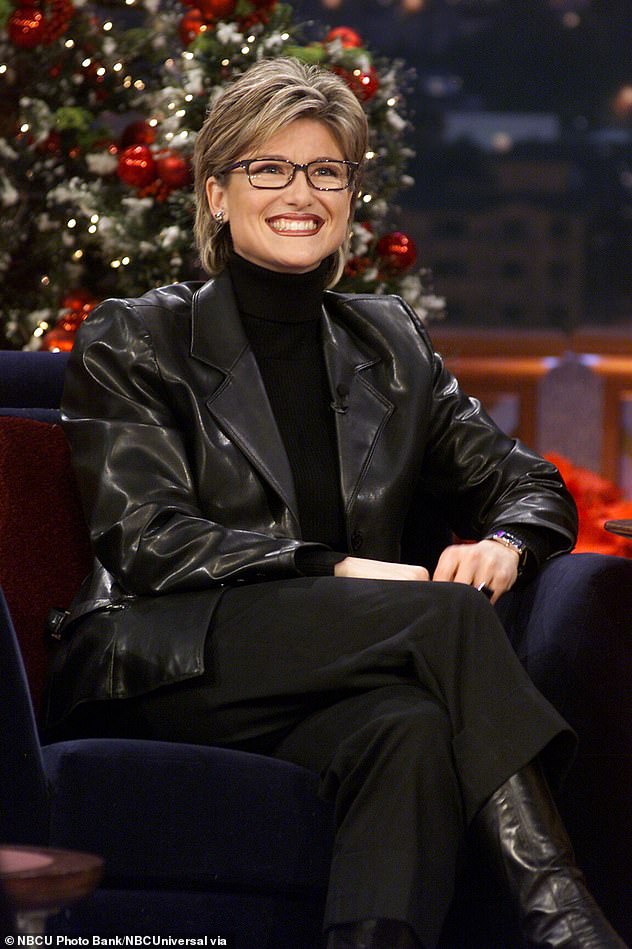 ‘Katie Couric caused that problem in Sydney and she used it to trash Ashleigh Banfield within the network. It was disgraceful,’ an NBC insider told DailyMail.com. Banfield is pictured in 2000, the same year as the Olympic Games

The incident began when Banfield was advised by a producer that she would fill in for legendary NBC News anchor Tom Brokaw and interview Olympic Gold medalist Michael Johnson in his place at the Olympic Park in Sydney.

Katie Couric would be interviewing him first for the TODAY Show and Banfield would then interview him for the next broadcast of NBC Nightly News. 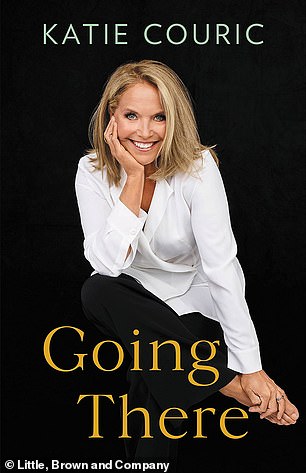 ‘Going There’ will be published in late October by Little, Brown and Company

A senior producer told Banfield that NBC had made a deal with Michael Johnson’s team that no questions would be asked specifically about the use of performance enhancing drugs.

However, Banfield was advised that she could ask about the rumors of other athletes doping to gain an advantage at the Olympic Games.

Johnson never used drugs, however years later he gave back his Gold medal for the relay race in Sydney when it was revealed that his teammate Antonio Pettigrew admitted to using steroids.

When Banfield and a production assistant arrived at Sydney’s Olympic Park where the TODAY Show had their custom built set, an aggressive female producer who worked for Couric marched right up to Banfield and yelled in her face ‘You aren’t supposed to be in here,’ the insider claims.

‘Spit was flying everywhere into Ashleigh’s face,’ they said.

The producer reportedly told Banfield to ‘sit outside the studio door on this chair.’ The chair belonged to the show’s security guard who looked on mortified.

The producer then looked at the production assistant and said, ‘It’s ok, you can come in, but she has to sit outside,’ referring to Banfield.

The production assistant was ushered inside where Couric was putting on her microphone and joking about how she made Banfield wait outside and was barred from coming in until she was done.

‘I hope it wasn’t too mean having her kicked out of here. Hehehehe,’ Couric reportedly said as everyone laughed.

While Banfield waited outside, Couric announced, ‘I think Michael [Johnson] has another interview to do before he leaves, but before he does that, my daughter Ellie needs to interview him first for a school paper.’

Banfield continued to wait as nine-year-old Ellie went before her.Michael then gifted Ellie with one of his gold running shoes that he signed for her.

Couric writes about this incident in her book ‘Going There’ but appears to make no mention of her rift with Banfield in Sydney.

‘Granted, sometimes the over-the-top perks of my job made it hard to keep everyone grounded,’ Couric writes. ‘How could I not bring the girls to the Olympics in Salt Lake City, Sydney, Athens? They met gold medalists; Ellie interviewed sprinter Michael Johnson for a school paper, and he autographed one of his gold running shoes for her.’ 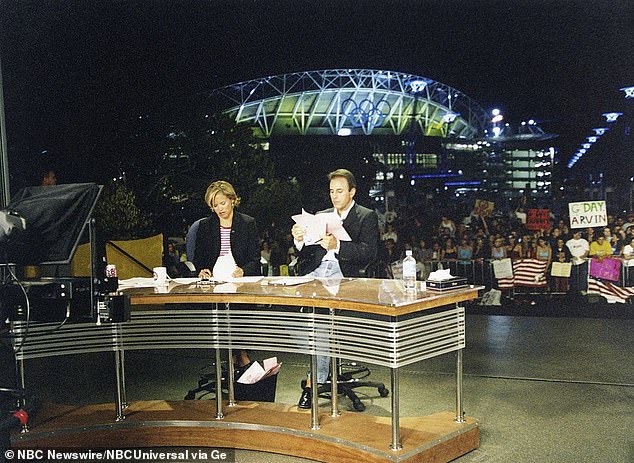 ‘Here was America’s so called sweetheart, showing she was no supporter of her colleague or another woman and she openly took joy in the fact that she’d at first blocked Ashleigh from being on set,’ an NBC insider said. Katie Couric and Matt Lauer are pictured on set at the 2000 Olympic Games 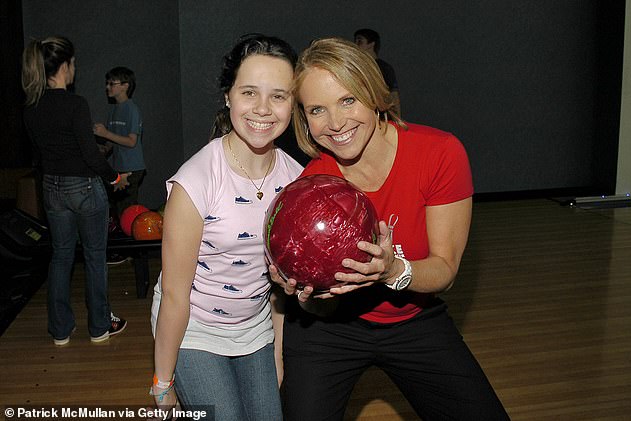 Finally, it was Banfield’s turn to interview the runner and she was ushered into the room and right onto the set.

Rather than leave the set so Banfield could complete the interview in peace, Couric stood around to watch with a gang of production staff and her daughter.

All was going fine until Banfield asked him about the rumored drug use by athletes at the Olympics.

Michael stopped and looked furious and a member of his team intervened and said, ‘This wasn’t agreed to, what are you doing?’

Couric then began mocking Banfield out loud to the production assistant and everyone around her.

‘What is she doing? Who does she think she is? This is so embarrassing for me and for the TODAY Show,’ Couric reportedly said.

The interview quickly ended and as Banfield was leaving the set, she walked by Couric who said, ‘Eww that was awkward Ashleigh. Eww. Awkward.’

Banfield then returned to the NBC newsroom where she was reprimanded for asking the question and for embarrassing Couric.

The NBC insider tells DailyMail.com that Couric used that one event to undermine Banfield across NBC News.

‘Here was America’s so called sweetheart, showing she was no supporter of her colleague or another woman and she openly took joy in the fact that she’d at first blocked Ashleigh from being on set, then had her child do this pathetic school project interview with Michael and then she relished in Michael’s response when he stopped the interview at the point Ashleigh asked the most important question,’ they said.

‘Ashleigh Banfield was the only journalist in the room that day. While Katie Couric sold her fake perky dark soul for access to Michael Johnson, Ashleigh attempted to ask the question that was pertinent to what was happening at the Sydney Olympics.

‘And she was vindicated years later when Johnson handed back one of the gold medals he won in Sydney for the 4x400m relay because his team mate had in fact used performance enhancing drugs behind his back,’ they added. 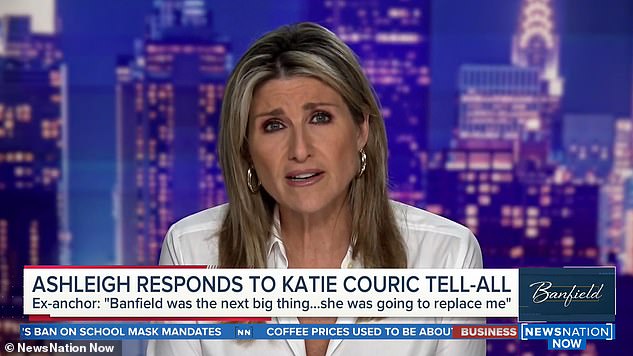 When contacted by DailyMail.com, Ashleigh Banfield wouldn’t comment beyond saying: ‘I don’t want to reopen old wounds, but Sydney certainly was a professional challenge for me’

In 2003, a story in the New York Times, headlined ‘From Cable Star to Face in the Crowd’, cited the Sydney incident as an example of Banfield’s inability to get along with her colleagues, specifically Katie Couric.

‘Ms. Banfield also had her problems with Ms. Couric and the staff of TODAY,’ the article reads. ‘During the 2000 Olympics she angered the program’s crew when she showed up at their set in Sydney, Australia, to interview the runner Michael Johnson after Ms. Couric, who had gotten him to give NBC an exclusive interview, was finished. One person who was there said Ms. Banfield broke TODAY’s promise to Mr. Johnson and asked him about an Olympic steroid controversy. Ms. Banfield said she was told to do so by producers of ”NBC Nightly News.” But resentment remained.’

Our source read that same NYT piece and said, ‘A few years later I read in the New York Times that Ashleigh had ‘problems’ with colleagues such as Katie Couric. My blood boiled when they mentioned the Sydney Olympics as the main example.

‘Katie Couric caused that problem in Sydney and she used it to trash Ashleigh Banfield within the network. It was disgraceful.’

‘I kept thinking, what must Katie’s daughter think, seeing her Mom behave in this way? What sort of example is she setting for her? As a parent you teach your children to be kind and not bully others but Katie was the complete opposite to Ashleigh and she had no problem doing it in front of her daughter and all of the Today Show staff,’ they added.

When contacted by DailyMail.com, Ashleigh Banfield wouldn’t comment beyond saying: ‘I don’t want to reopen old wounds, but Sydney certainly was a professional challenge for me.’

A rep for Katie Couric did not respond to DailyMail.com’s request for comment.

DailyMail.com previously revealed that Couric admits in her upcoming book that during her time at TODAY she was unwelcoming to other women because she felt like she needed to ‘protect my turf.’

She writes that she was aware that ‘someone younger and cuter was always around the corner’ and singles out Banfield as an example.

Couric writes: ‘For a minute there, Ashleigh Banfield was the next big thing; I’d heard her father was telling anyone who’d listen that she was going to replace me. In that environment, mentorship sometimes felt like self-sabotage.’