Kirstie Alley was born in Wichita, Kansas, in 1951, but it wouldn’t be long before she high-tailed it from home and began her journey from the small screen to the silver, and into the hearts of America.

The daughter of a lumberman and one of three kids, Alley moved to Los Angeles after dropping out of college in her sophomore year. While working as an interior designer, she appeared on a series of game shows and for the first time was broadcast into living rooms across the country. It was just the beginning.

In 1982, just past 30-years-old, Alley landed a role in Star Trek II: The Wrath of Khan, which was followed by Blind Date in 1984, and then the television series North and South a year later.

She scored a hit alongside Mark Hamon in the 1987 comedy Summer School, and found herself on the way to stardom the same year after landing the part of Rebecca Howe in the hit television sitcom Cheers.

As Rebecca, the dry and droll-witted manager of the Cheers bar, Alley shone, and took home the 1991 Emmy for actress in a lead role. Accepting that award, Alley’s daring character and sharp sense of humor came to the fore, as she thanked her husband, Parker Stevenson, for giving her ‘the big one for the last eight years.’

Kirstie Alley was born in Wichita, Kansas, in 1951, but it wouldn’t be long before she high-tailed it from home and began her journey from the small screen to the silver, and into the hearts of America 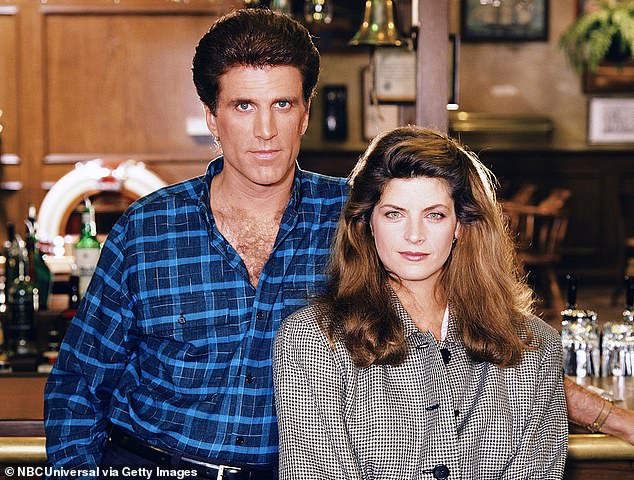 In 1989 her movie career began to soar when she appeared alongside John Travolta in the first Look Who’s Talking film.

The movie grossed nearly $300million and was followed up by a pair of sequels.

She won her second Emmy award in 1994 for David’s Mother, a made-for-television movie in which Alley portrayed a mother caring for an autistic son.

By 1995 she had a star on the Hollywood Walk of Fame as her film and television credits continued to climb, adding a notable performance as the owner of a New York City lingerie company in Veronica’s Closet from 1997 to 2000.

In 2005 she starred in her show Fat Actress, a largely unscripted comedy which explored how her body-image became a centerpiece of her career and tabloids of the day. 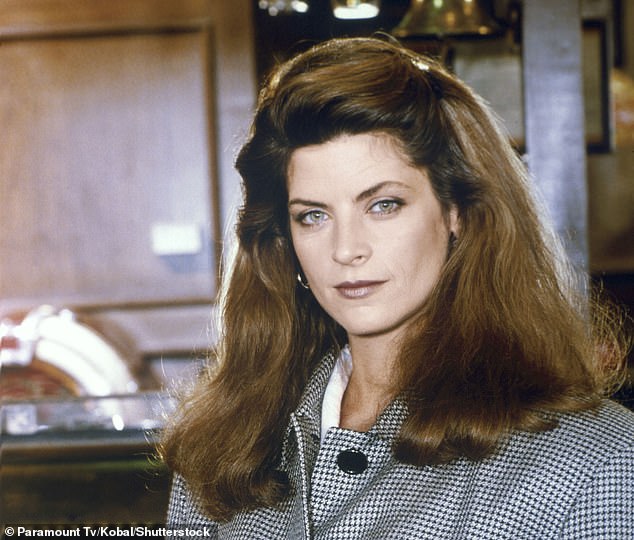 Kirstie Alley as Rebecca, the dry and droll-witted manager of the Cheers bar 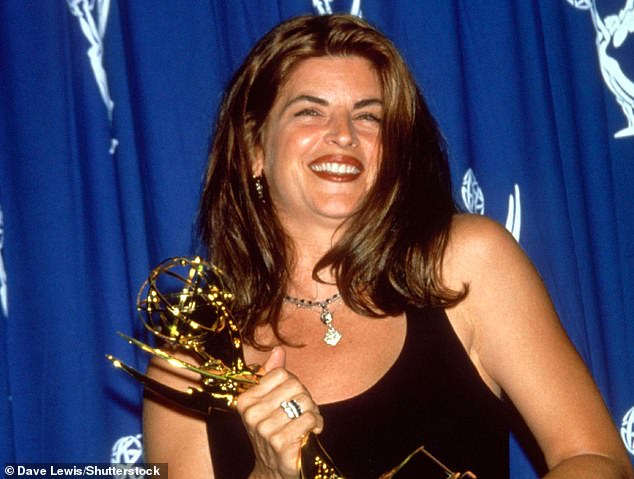 Kirstie Alley holds her 1994 Emmy for her work in David’s Mother, a made-for-television movie in which Alley portrayed a mother caring for an autistic son

Alley’s weight came to the fore of her public image around 2004 after tabloids relentlessly covered her weight gain.

‘Honestly, I didn’t know how fat I was,’ she told Oprah in 2004, opening up about her struggles. ‘Thanks to the tabloids I went, ‘Damn, girl, you’re fat!”

Soon after she became the official spokesperson for Jenny Craig, and famously lost 75 pounds while promoting the weight-loss system.

She promoted the company until parting ways in 2007 as her weight began to fluctuate again. By 2009 she told PEOPLE she weighted nearly 230 pounds. But by her 2011 appearance on Dancing with The Stars – in which she finished second – she had shed nearly 100 pounds.

Alley long-insisted that she achieved all her weight-loss through hard work and without the help of surgery or treatments. She rejoined Jenny Craig in 2014, and advocated that said women needed to focus on weight-loss for their own reasons, not for others ideas about how they should look. 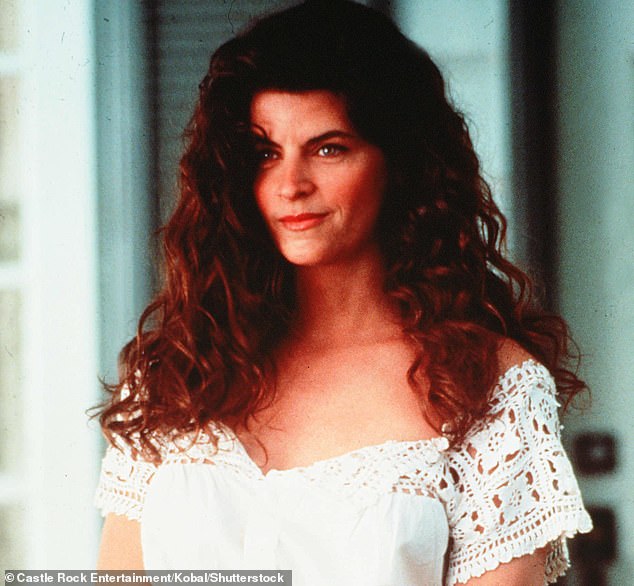 Kirstie Alley on Sibling Rivalry in 1991. She won an Emmy for best actress in a leading role that year 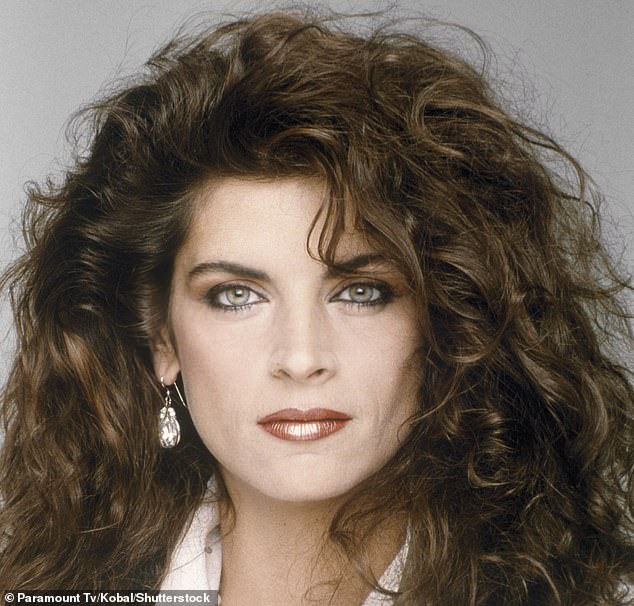 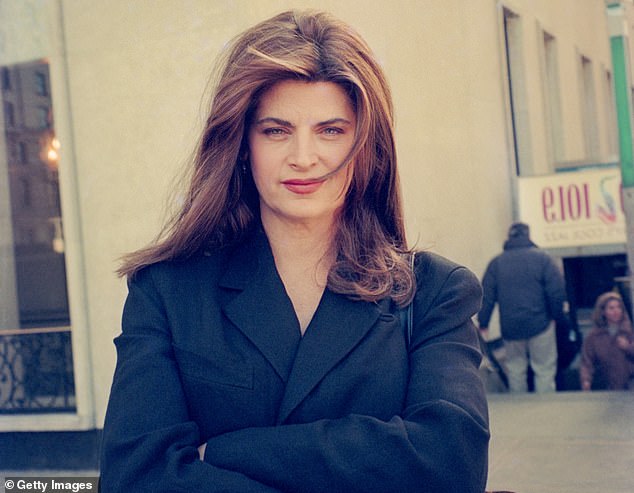 Kirstie Alley in 1990, a year before she won her first Emmy award

In her later years Alley spoke her mind on social media, and defended herself even in the face of controversy which threatened her career.

In 2015 she took to Twitter to announce that she would not be endorsing Hilary Clinton.

The next year she announced her support for Donald Trump, only to rescind it months later.

‘I hate this election’ Alley wrote. ‘And I’m officially no longer endorsing either candidate.’ She included a video of a woman placing a ladder into a dumpster to help a pack of bear cubs to escape, and joked she would be voting for her.

But then in 2020 she revealed she did in fact vote for Trump, and that she intended to again ‘because he’s NOT a politician.’

The response was vitriolic, with many people deriding not only her politics, but her career too. Alley held firm in her stance however, and urged her followers to ‘Stick to your guns.’

The next day she held her ground on Sean Hannity’s FOX News show.

‘They always attack the same three things: That I’m a fat, irrelevant, Scientologist,’ she said. ‘But, this has been going on for 40 years, so I’m sort of prepared.’ 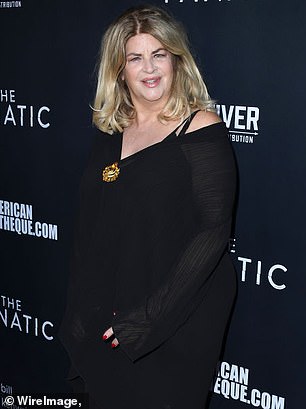 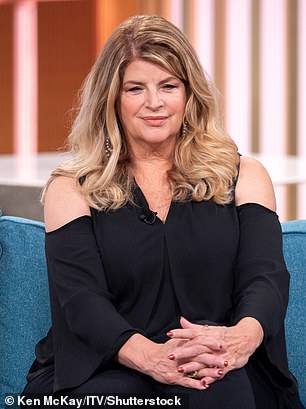 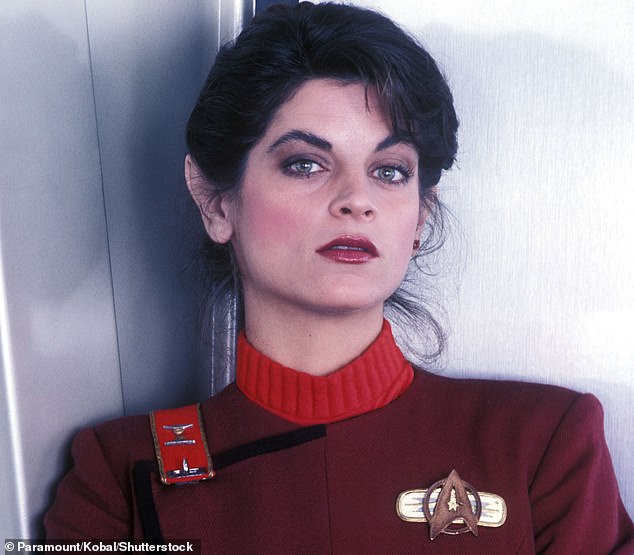 Kirstie Alley in her first movie role, the 1982 Star Trek II: The Wrath of Khan

Raised as a methodist by her parents in Kansas, Alley joined found refuge from a drug addiction after she moved to LA through the Church of Scientology.

Alley has long been open about he cocaine addiction, which began to plague her at the age of 25 following the fallout from her divorce with her first husband.

‘I had heard that cocaine made you peppy and happy and I was sort of depressed because I had gotten a divorce and wrecked everybody’s lives,’ she told Howard Stern in 2013.

‘So I thought, ‘I’m gonna try this. I took one snort of cocaine, and I go, ‘Oh my God! I’m gonna do this every day for the rest of my life!”

By 1979 she’d found her way into the Scientology community, and joined the church that year while participating in their drug-rehabilitation program Narconon.

‘I thought either [Scientology] is the world’s biggest scam, or I thought this is how I am going to get rid of this hideous compulsion,’ Alley said to Entertainment Tonight in 2012.

She was a devoted member of the church ever since, and donated at least $5million to it during her life. 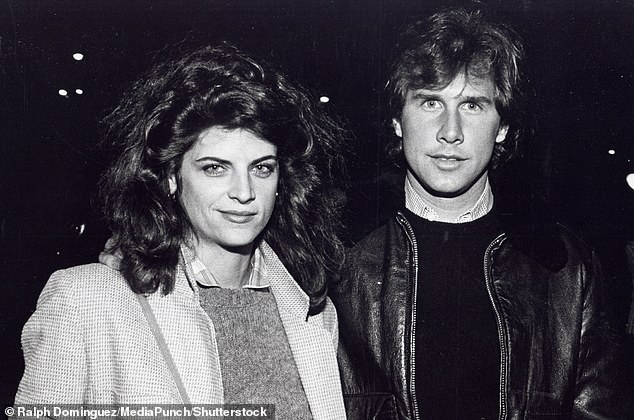 Kirstie Alley with her second husband, Parker Stevenson, in 1983 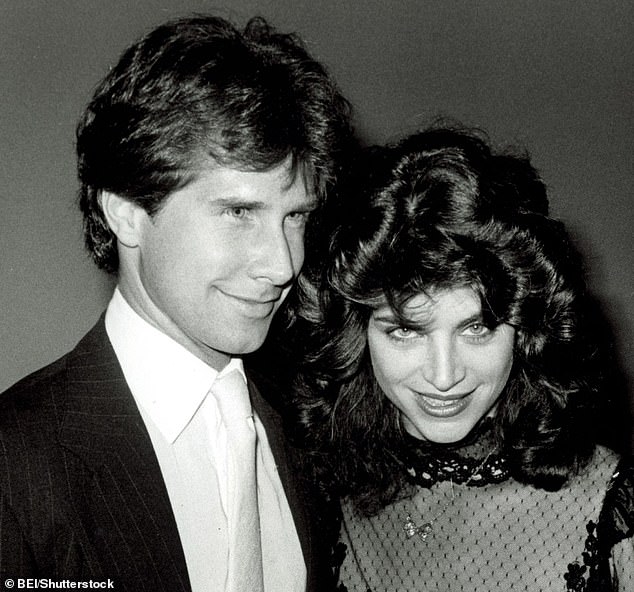 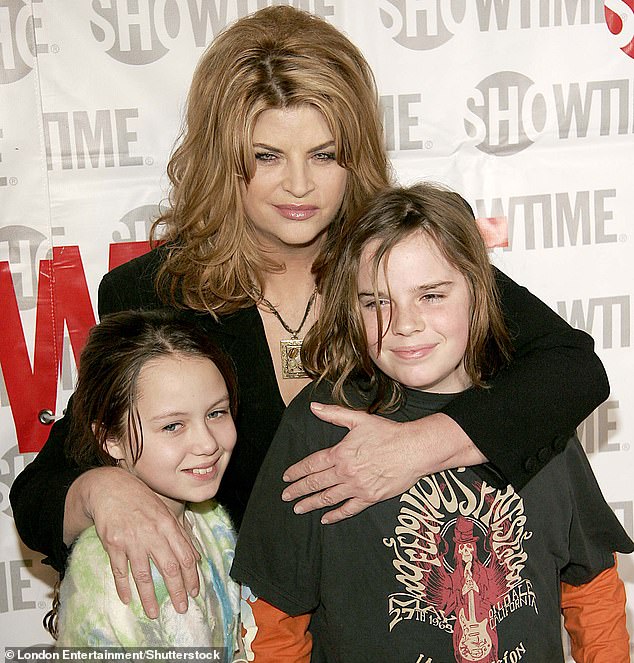 The actress was first married to Bob Alley in 1970. The pair were high school sweethearts from Kansas, and the marriage lasted seven years before they divorced.

While trying for children Alley suffered a miscarriage with Stevenson, and they adopted their son William True in 1992, and their daughter Lillie Price in 1995.

She and Stevenson divorced in 1997. She became a grandmother in 2016 after William had a son.

Allie has been open about her affections for John Travolta – a fellow scientologist – show she described as ‘the greatest love of my life.’

‘I did love him. I still love him,’ she said while appearing on the reality show Celebrity Big Brother U.K. in 2018. ‘If I hadn’t been married, I would have gone and married him.’

Alley said she fell in love with Travolta while they were working together on Look Who’s Talking – in which they portrayed a pair of lovers raising a child – and that she remained in love with him long after.

‘It took me years to not look at John as a romantic interest,’ she told Howard Stern in 2013.

She insisted she never physically cheated on Stevenson with Travolta, but that how she behaved was worse. 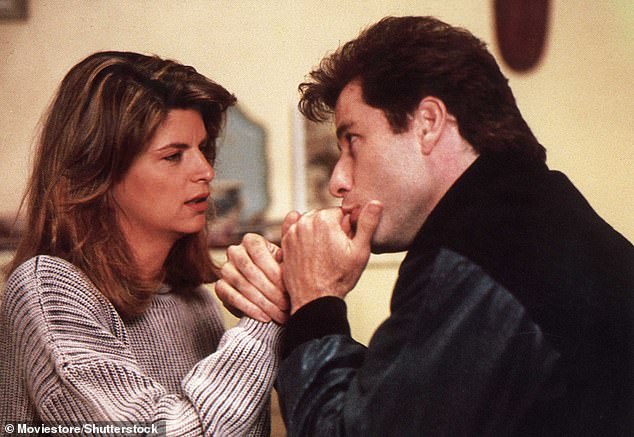 Alley said she fell in love with Travolta while they were working together on Look Who’s Talking, in which they portrayed a pair of lovers raising a child – and that she remained in love with him long after 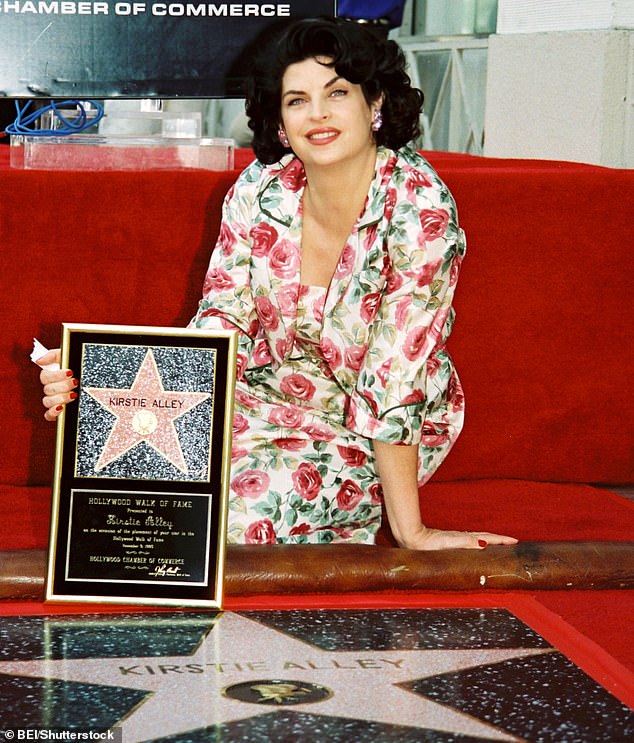 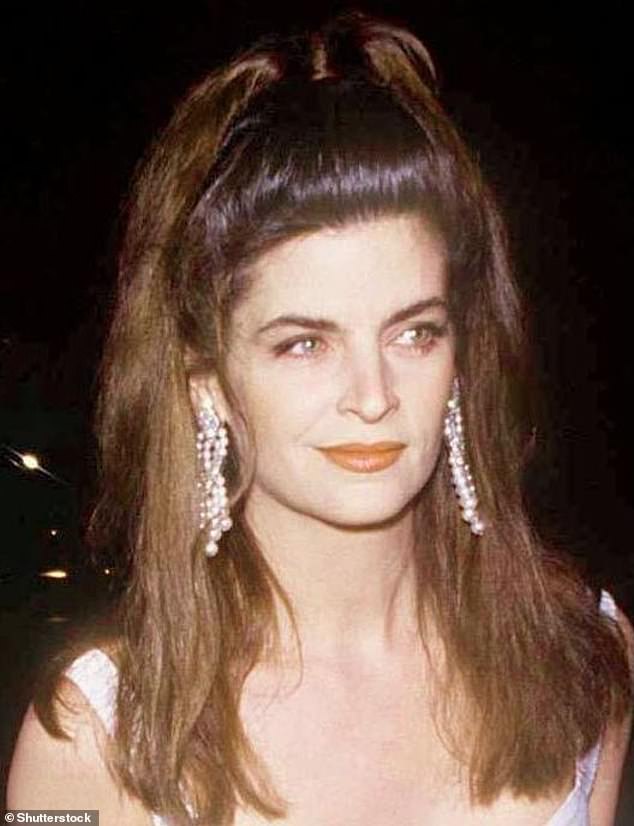 Kirstie Alley attends the Golden Globes in Los Angeles in 1991