How Kobe Bryant grew his wealth to $800million

Kobe Bryant amassed a fortune of more than $800million before he died on Sunday in a tragic helicopter crash, after investing his astronomical NBA salaries into tech, media and sports drinks.

The 41-year-old sporting legend and his daughter Gianna died in a helicopter crash along with seven other people including two of her young friends when their chopped smashed into the side of a hill in Calabasas, California, on Sunday morning.

The cause of the crash remains unknown.

The pilot had veered off in an opposite direction to where he was meant to be flying and because of the poor visibility and clouds, it’s possible he had become disoriented and did not know where he was flying.

As the NTSB continues to investigate the wreckage and police work to recover the bodies of those killed, Bryant is being universally mourned.

Throughout his stunning 20-year NBA career, he earned $320million through his salary alone. When he joined the Lakers in 1996-1997, his salary was $1million.

Bryant is the second highest-earning NBA star in history. Kevin Garnett made $14million more than him, pocketing  $334.3 Million, but he played 21 seasons over Bryant’s 20.

On top of his salary, Bryant made at least another $300million through endorsements, according to Forbes.

McDonald’s: $10million endorsement contract in 2001. McDonald’s cut ties with him in 2003 when he was charged with sexual assault.

BodyArmour: In 2014, Bryant bought a 10 percent stake in the sports drink through his company, Kobe Inc., for $6million.

It was his first investment through the company which he set up to carry him through his retirement.

In 2018, after he retired, Coca Cola bought the company for $2billion.

Among the many companies he was worked with were McDonald’s, Nintendo (which also made a video game after him), Nike and Adidas.

$93 million over 15 seasons but made more than $1billion through his brand.

In 2001, he signed a $10million endorsement deal with McDonald’s.

He even appeared in commercials for the fast food chain.

In 2003, McDonald’s cut ties with him after he was accused of rape.

Bryant was never convicted; the accuser- a woman who was working as a front desk clerk in a hotel – decided not to testify at his trial and prosecutors dropped the charges.

They settled a civil suit out of court the following year for an undisclosed amount.

He spent a reported $8million to get out of an earlier contract with Adidas.

It is unclear how much Adidas paid him when they signed a contract in 2001 to produce shoes but the Kobe, the first shoe that Adidas ever sold for $125, was an instant hit. 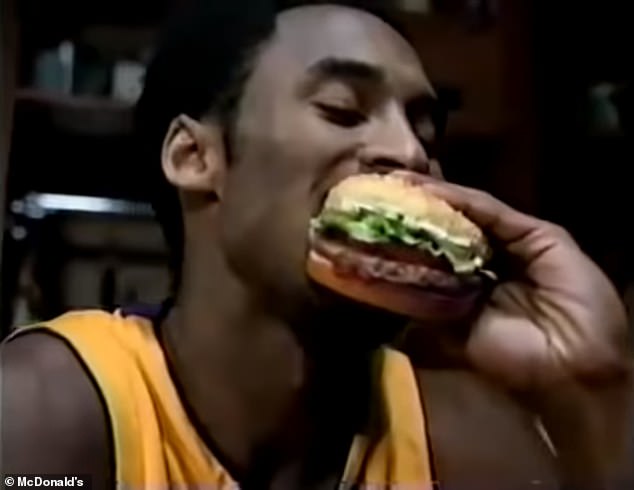 Lucrative endorsements and partnerships, like his contract with McDonald’s for $10million in 2001, earned him another $300million 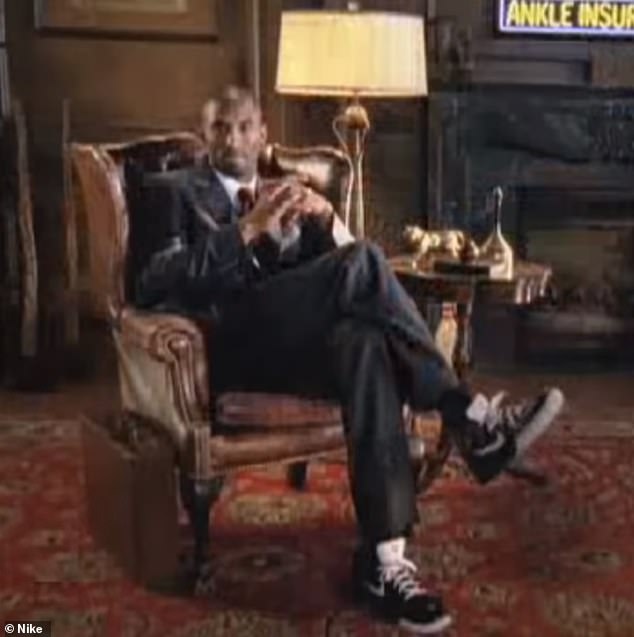 Bryant in a Nike shoe commercial in 2005. He earned $40million over four years through his deal with Nike

On top of the $680million he made through endorsement deals and his salaries, Bryant founded two investment firms before his death.

Two years before he retired, he launched Kobe Inc., the first of two investment firms.

Through Kobe Inc, he invested in the sports drink BodyArmour, buying a 10 percent stake for $6million. 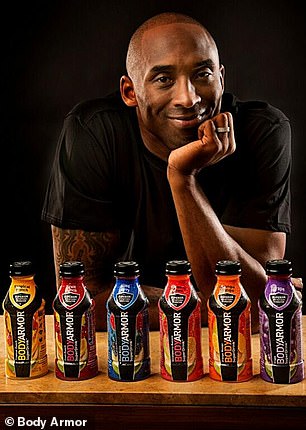 In 2014, Bryant bought a 10 percent stake in BodyArmor for $6million. Coca Cola bought the company in 2018 for $2billion

When Coca Cola bought the company for $2billion in 2018, it made his stake worth $200million.

They have invested in websites and data companies including The Players Tribune, LegalZoom, Juicero and Scopely since then.

They also put money into Alibaba, the Chinese e-commerce site.

It is unclear how Bryant planned to divide his wealth.

He is survived by his wife Vanessa and their three other daughters; Natalia, 17, Bianka, three, and baby Capri who is just seven-months-old.

A month before he died, Bryant had filed paperwork to trademark ‘Mambacita’ for his daughter Gianna.

She was a promising basketball player and her father had tried to trademark the name for her to put it on sports gear.

Bryant also wrote children’s books for his daughters. They are still being sold on Amazon 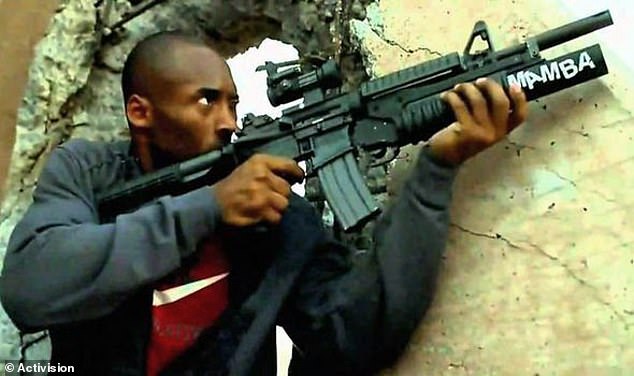 He also wrote children’s books as a way, he said, to show his daughters stories with girls which ‘looked like them’ being represented as athletes.

The Wizenard Series, Legacy and the Queen, and Epoca: The Tree of Ecrof are the books he bought. They’re sold online for around $15-$20 each.

Before his death, Bryant said he wanted to be remembered not just for his basketball career but for his investments. 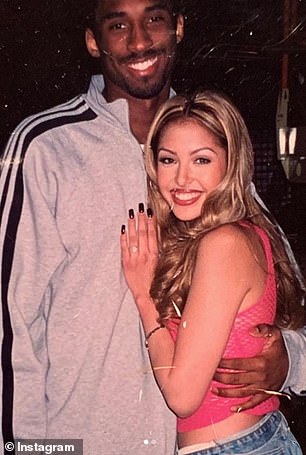 Bryant had been with his wife Vanessa for 20 years when he died. He had been with the Lakers for four years by the time they got married

He was determined to continue making money after his retirement and poured himself into teaching his daughter’s basketball team as a means of inspiring a new generation of female basketball players.

‘Now, championships come and go. Right? There’s going to be another team that wins an NBA Championship, another player that wins another MVP award.

‘But if you really want to create something that lasts generations, you have to help inspire the next generation,’ he told CNBC in a 2016 interview.

Bryant spent his money in a variety of ways.

He loved cars and, having grown up in Italy, had a particular affection for Ferrari’s.

He lived with his family in Newport Beach, California, in one of several properties he owns there. 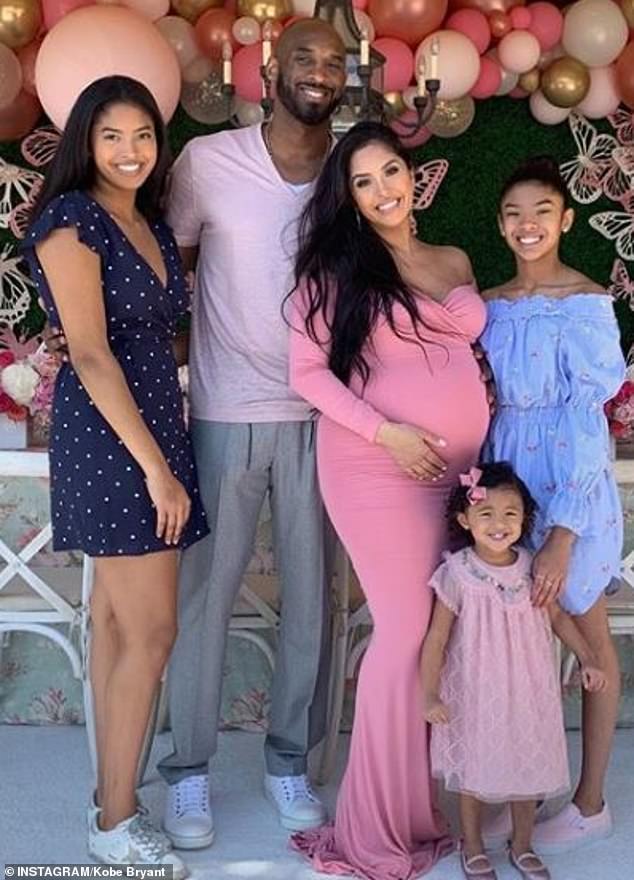 The star with his wife and three daughters. Vanessa gave birth to their their fourth, Capri, in July