How Konnie Huq helps the planet: no spending money on clothes

Desperate times need desperate measures and in the kitchen of her west London home, former Blue Peter presenter Konnie Huq is mulling over the idea of tying herself semi-naked to a tree round the corner from her house.

‘It’s definitely something to consider,’ she laughs. ‘It would absolutely send a message.’

Just to be clear, Huq, 44, is not talking about a scene of gratuitous nudity, she is talking about the best way of stopping her local council from granting planning permission for a prep school on an area of green space.

Huq drives an electric car, led the Mothers Rise Up march for climate change last year and hasn’t bought an item of clothing for five years. She is committed to saving the planet – in particular, her own piece, on the doorstep of the home she shares with her husband, Black Mirror creator Charlie Brooker, and their two young children.

Much has changed in the life of Huq, who in 1997 was announced with much fanfare as the BBC’s first British Bangladeshi presenter of Blue Peter. At the time she felt ‘almost embarrassed’ by the focus on her ethnicity. ‘I wanted to think I’d got the job because I was a good presenter.

‘My parents were first-generation immigrants. My mum wore a sari but at school and as a teenager and in my 20s I wanted to fit in. I remember on Blue Peter being sent to Bangladesh. I was cooking with relatives and they asked me to speak and translate in Bangladeshi and I felt so uncomfortable. I should have been proud but I wasn’t, which really bothers me now.’

Two decades on, Huq has taken a step back from television presenting and is focused on writing children’s books. Her debut, Cookie! And The Most Annoying Boy In The World, has as its heroine a geeky British Bangladeshi girl who loves school and is more interested in scientific experiments than cool outfits. Illustrated by Huq, the book is sharp and funny and has been praised by the likes of David Walliams and Jacqueline Wilson.

‘I wanted to write a book I would love to have read as a kid,’ she says. ‘There were no small brown kids as the centre of the children’s fiction I grew up with. But my point is not to make this book separate but to show that this little Bangladeshi kid is like so many other kids in Britain, a geeky little girl with quirky thoughts and ideas, so anyone can relate to her.’ 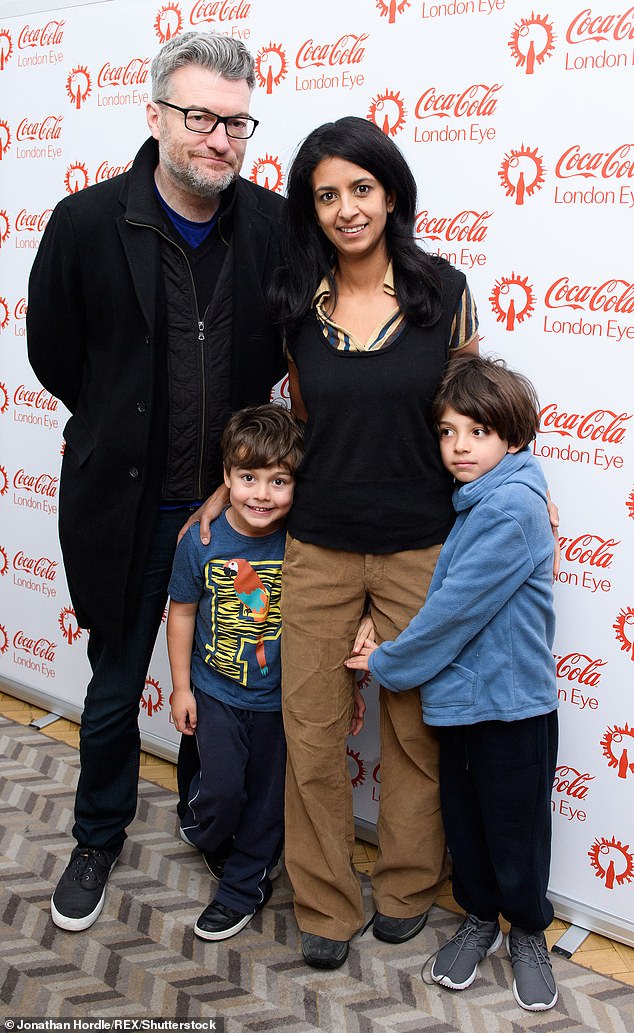 Huq with husband Charlie Brooker and their boys, Huxley and Covey. ‘When we got married, Charlie didn’t want kids and I did. He turned out to be a natural and I am the one who works at it’

She is, of course, based in part on the young Huq, the youngest of a high-achieving academic family who, like her elder sister – the Labour MP Rupa Huq – went to Cambridge University. ‘I loved science but I also loved performing. When I was 14 I appeared on Blue Peter with the National Youth Music Theatre singing a solo. If you look closely you can see a young Jude Law in the background.’ At 16 she landed a job doing celebrity interviews for a cable TV channel. Despite gaining a degree in economics, she went into TV-presenting working on GMTV and Channel 5’s Milkshake before winning the slot on Blue Peter, which she kept for a record 11 years.

‘Being a Blue Peter presenter is not well paid,’ she says. ‘But we were way ahead of the curve in so many ways. We were eco, we did stories on refugees, on disability issues.’ She also discovered that her two male counterparts, Matt Baker and Simon Thomas, were on a higher pay scale. ‘I went to the head of the show with a spreadsheet and asked for more money based on my experience and time on the show. I think they were so shocked they just gave in to me,’ she says.

The year she left, she appeared on the cover of FHM wearing only a sheet. ‘They paid me £15,000,’ she says, ‘which was enough to put a deposit down on a house. And I got away with being completely covered up, so it was a win for me.’

Her parents had hoped for an arranged marriage, but were nonetheless thrilled when she met the very British non-Muslim Brooker, whom she married in 2010. When she became a mother in 2012, she stepped back from presenting ‘because I want to be the one doing the school pick-ups, knowing what my kids are doing’, she adds. ‘When we got married, Charlie didn’t want kids and I did. He turned out to be a natural and I am the one who works at it. Now my kids are at school, I cram everything into the hours they are out of the house, which is why writing works for me.’

As for her refusal to buy any new items of clothing for herself, she laughs: ‘My husband has a wife who is happy to wander round in old leggings held up with worn elastic. I’m happy with who I am and I’m more concerned with other issues and trying any way I can to make a better world for our children.’

‘Cookie! And The Most Annoying Boy In The World’ is published in paperback by Piccadilly Press on Thursday, priced £6.99