How Lenny Henry escaped from minstrel shows to alternative comedy

I’ll always be grateful to Chris Tarrant – he inspired me to leave The Black And White Minstrel Show. I was stranded in that dubious relic of a touring production for five years from 1975 – a young black dude performing stand-up for exclusively white audiences, between musical numbers by blacked-up white singers and leggy dancers. And all the while, the excitement and promise of my TV breakthrough in New Faces was quickly fading.

Ever since I’d won the talent show earlier that year, I had been away from home almost constantly, thrust into a completely adult world in which I could sell out a room of club-goers eager to see whether the 16-year-old black kid from Dudley could do longer than three minutes.

For quite a long time during this period the answer was: no. I probably had a good four minutes in me, but after that things would go terribly wrong. I’m sure many people were surprised at the ‘higgledy-piggledy, back-of-a-fag-packet jokes nicked from The Beano’ nature of my act. Still, I always gave it my best shot.

So to begin with, performing summer and winter seasons with the Minstrels had seemed like a good idea. I needed the work and the money, and there was undoubtedly a lot I could learn, performing in the biggest performance spaces in the country.

The impresario behind the show, Robert Luff, was tough but kind, and he protected me from a lot of the c*** showbiz throws at you.

Whenever I questioned my involvement with the Minstrels to him, Mr Luff wouldn’t get drawn into an argument about race or prejudice; he would simply insist that his shows were just good old-fashioned entertainment. Although I liked him very much, I know what he was saying was akin to what comes out of the back end of a bull.

I respected him, though, and despite the embarrassment of being the only real black person among all those fake ones, I still wanted to get out there and make people laugh. All the same, from the end of the very first season, I wanted out. I was lonely, too. Since success had struck, I’d been separated from my friends and family, taking every gig or TV part I was offered. Showbusiness seemed to be another term for separation, isolation and loneliness (a famous law firm in hell, I believe). The qualities needed to survive were a thick skin and the ability to form friendships quickly.

On one of my first proper TV jobs – a sitcom called The Fosters, which was filmed not long after I signed with the Minstrels – I stayed at the huge Grosvenor hotel near Victoria Station, and found myself wandering the floors every night when I got in, lonely and scared of what was to follow, thoughts galloping through my mind. Would I be any good? What did people think of me? Fortunately, my cast mates Norman Beaton, Carmen Munroe and Isabelle Lucas formed a protective shield around me and provided much-needed familial support whenever I wobbled. My TV family did good work in keeping me sane during this period.

And my Minstrels years ground on, amid the working-men’s clubs and the TV roles. It wasn’t until 1978 that an escape route was provided. Unbeknown to me, my colleague, the very funny comedian Frank Carson, encouraged Chris Tarrant, the lead presenter and producer of the anarchic Saturday-morning show Tiswas, to see me perform. I had a feeling that the Black And White Minstrels would most definitely not be Tarrant’s bag (he was into Status Quo, jeans and rugby clubs at the time – so yikes), but I was glad he was coming and hoped he’d be impressed.

Then, disaster. Keith Harris, the ventriloquist compère of the show, had bronchitis and no voice, which obviously meant that his dummies Orville and Cuddles couldn’t talk either. So Keith was out, and I was designated compère on the night Tarrant was due in.

I had enough material to link the show together on my own, but that didn’t help me when, after descending the shiny stairs on the arms of some beautiful, sequinned and befeathered dancers, I slipped and split my trousers. I attempted to regain my dignity with some impromptu crowd work, messing around with the front row. I eventually left the stage with my hands covering the offending rip in my pants. As I did, I thought I could see a blond hulk wetting himself in the audience.

A few nights later, at the stage door of the Britannia Pier Theatre, Great Yarmouth, the doorman gave me an envelope. It contained a handwritten letter from Tarrant, asking if I would like to pop down to the studio when Tiswas was back on the air. I went to watch an episode go out live. It was a chaotic mess, and I loved it. And Tarrant hired me, which would lead to a massive change in my career.

It would take at least 18 months for me to find my feet, although fairly early on we discovered that Trevor McDonut, my idiosyncratic impression of the ITN reporter Trevor McDonald, was handy. I could pop up anywhere, do a series of newsflashes, and then be drenched with icy water. Tarrant would throw the buckets himself and took great pleasure in hurling them as aggressively as he could.

To begin with, Tarrant would tell me off when he thought I hadn’t been funny, which was often. I would get really upset, but he always made it up to me by taking me out for lunch the day before the show. He would plough through a plate of moules marinière, accompanied by a bottle of good red wine, and go through the previous week’s show, telling me what worked and what didn’t.

Although Tarrant was a bit of a tyrant (he yelled a fair bit), I think the collaboration between all of us was what made Tiswas so successful. Everyone had ideas, which we were encouraged to pitch every week (usually in the bar after the show, hmmm). We felt like we were the hardest-working team in television. Finally, things were panning out.

My personal relationships at the time, meanwhile, were fun but regretfully short. All I remembered from growing up was people shouting at each other, stuck in a relationship that had perhaps run its course. I’m pretty sure that my at-times hostile home environment had made me afraid of the commitment side of things. I wanted to be loved and held and all that good stuff, but when it came to the deeper connective tissues of romantic love, I would freeze and start looking for a way out. Thankfully, that is no longer the case.

Tiswas was going well, but there was the ever-present vibe of career dissatisfaction, because I was still performing summer and winter seasons with The Black And White Minstrel Show. What the hell was I still doing it for? Nobody talked about it at the Tiswas offices, but I could tell they felt sorry for me.

At the height of our fame, Tarrant and others started slipping off at weekends to do ‘golden wheelbarrow’ type gigs – so called because they needed a wheelbarrow to carry all the money they earned home. Soon they started to invite me along to perform my characters. 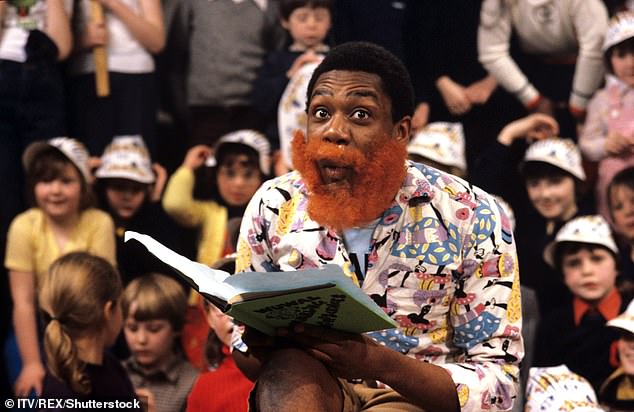 Henry does his David Bellamy impression. ‘In 1981 a new style of comedy was in the air, showcasing anarchic, left-leaning performers and material, and it was going to have profound consequences for me’

I loved being on stage with the Tiswas posse. It was like being in a band, but covered in shaving foam. We were in Bishop’s Stortford when I finally realised just how big Tiswas had become. Though we were performing in a venue that could safely hold about 500 people, there were at least 800 punters crammed in there and more than 300 dissatisfied wannabes outside.

If Bishop’s Stortford was a triumph, Stockport was a glorious revelation. The audience were fanatical, maniacal, screaming, yelling and shouting. I think it was this response that finally gave me the courage to quit the Minstrels. Why would I stay with them when I could get reactions like this? Buoyed by Tiswas confidence, I finally found the courage to tell Robert Luff that I no longer wanted to be connected with any Minstrel show, and he agreed! I was finally out.

In 1981 a new style of comedy was in the air, showcasing anarchic, left-leaning performers and material, and it was going to have profound consequences for me. Suddenly, the jokes weren’t about minorities, wives and girlfriends, travelling salesmen or landladies; they were about growing up in Wales, being a student, not being able to get off with anyone, male or female, not losing your virginity and not being very good at activism.

What I didn’t know was that I would soon be hurled into this world of alternative comedy, which brought with it new relationships, a new TV series and a new life. e