How ‘live’ TV ‘Ghostwatch’ with Michael Parkinson sparked outrage in 1992

It was the night that the BBC sent thousands of viewers into a panicked frenzy.

On the night of Halloween in 1992, millions tuned in to see what many thought was a live documentary about the paranormal.

Presented by chat show national treasure Michael Parkinson, along with Craig Charles, Sarah Greene and her husband Mike Smith, Ghostwatch centred on single mother Pam Early and her two daughters as they were tormented by a poltergeist.

Presenting ‘live’ from a studio, Parkinson liaised with Greene, who was based in the Earlys’ home in Northolt, north-west London, as Charles spoke to ‘neighbours’ outside about the affected house’s violent history.

The cameras that had been set up in the home then quickly picked up what appeared to be real evidence of the activity of poltergeist ‘Mr Pipes’, including the moment when Mrs Early’s daughters Suzanne and Kim screamed in terror as objects flew around their bedroom and their lamp bulb smashed.

The previously dismissive presenters, including the ordinarily unflappable Parkinson gave the impression to viewers that they too were convinced by what appeared to be happening.

In reality, the show had been planned months in advance and had been filmed in July of 1992 – but that did not stop many viewers going into a panic as the supernatural suddenly seemed very real.

Both the BBC and the police received a flurry of calls, with the broadcaster getting so many – the show had a phone-in element – that its lines became jammed. The BBC was ultimately also bombarded with complaints.

As many as three women are said to have gone into premature labour as a result of the stress invoked by what they saw.

Two ten-year-old boys even needed therapy after being so terrified by the programme, which was also blamed for the death of a mentally handicapped teenager.

Now, a new BBC radio documentary has re-explored the drama. The programme hears from Ghostwatch’s director Lesley Manning and its writer Stephen Volk, who both insisted they had not ‘anticipated’ the backlash.

Mr Volk described how people who phoned the BBC to complain were ‘quite outraged’ and described how ‘three different women went in Labour’, whilst one priest said the corporation had ‘raised demonic forces’.

It was the night that the BBC sent thousands of viewers into a panicked frenzy. On the night of Halloween in 1992, millions tuned in to see what many thought was a live documentary about the paranormal. Ghostwatch was presented by chat show national treasure Michael Parkinson (above), along with Craig Charles and Sarah Greene 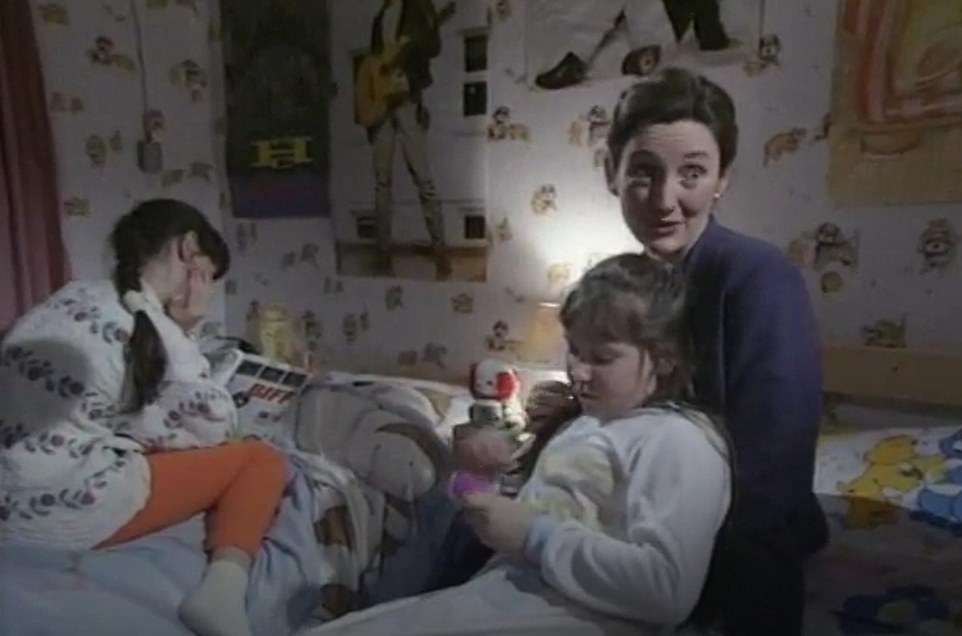 The makers of Ghostwatch always insisted that the show was a drama, rather than something that was intended to deceive viewers. It been billed as such in the run-up to it being shown to viewers.

The 90-minute show aired at 9.25pm on Halloween, which that year was a Saturday.

It meant that, although it was past the 9pm watershed, thousands of children who would have been in bed on a school night were allowed to watch with their parents.

The set-up of the show saw Parkinson presenting from a studio that was made to look like a spooky living room.

The mantlepiece of a fireplace was decked out with skulls, whilst a portrait of a ghostly figure was hanging on the wall.

Throughout the episode, Parkinson liaised with alleged parapsychologist Dr Lin Pascoe, who was in fact a professional actress called Gillian Bevan.

Mike Smith, Greene’s husband, oversaw phone calls from members of the public who shared their own ghost stories. Callers used the BBC’s standard number for phone-ins at the time – 081 811 8181.

The idea was that it would be stressed to viewers that the programme was fictional when they called in, but with only five operators handling calls, many of those who phoned in heard an engaged tone.

This convinced many that the show was real, and there was no social media to instantly check whether it actually was.

The Early daughters Suzanne and Kim were said to be being haunted by a terrifying poltergeist whom they nicknamed after their mother insisted that the sounds they were hearing were ‘just the pipes’.

Over the course of the show, it was revealed that Pipes was the disturbed spirit of a child abuser called Raymond Tunstall.

His menacing figure was subtly placed at various points in the show, including in the studio.

The girls had scratch marks on their faces, strange noises were heard and objects moved by themselves.

The scenes in Suzanne and Kim’s bedroom, which saw them scream in terror as they were ‘attacked’ by the poltergeist, echoed back to the infamous images from the case of the Enfield poltergeist. 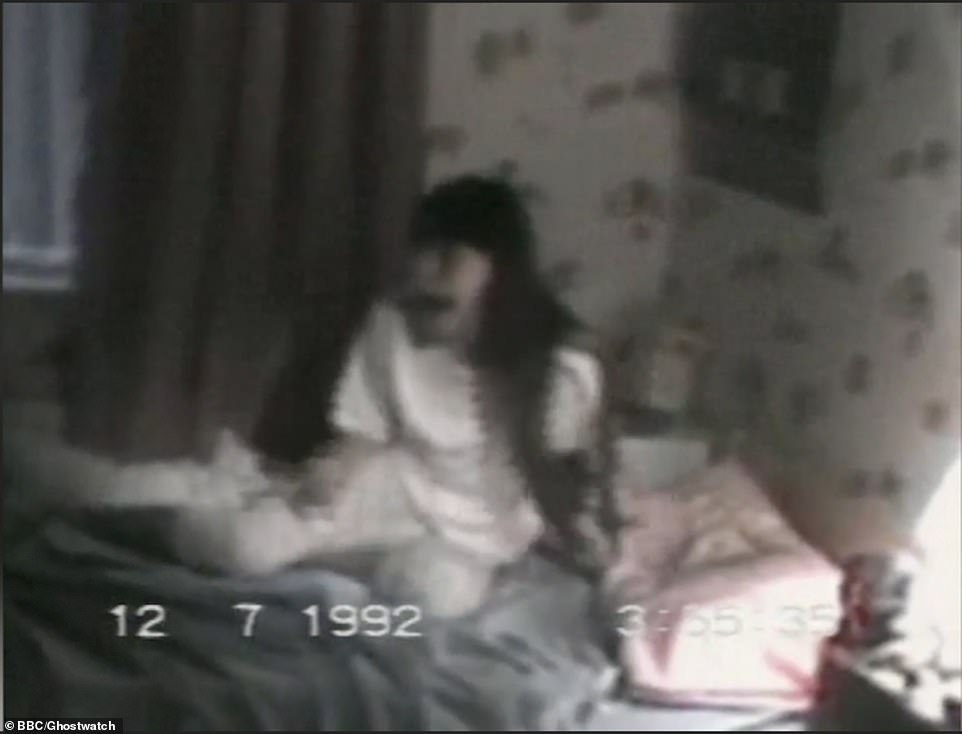 The scenes in daughters Suzanne and Kim’s bedroom, which saw them scream in terror as they were ‘attacked’ by the poltergeist, echoed back to the infamous images from the case of the Enfield poltergeist 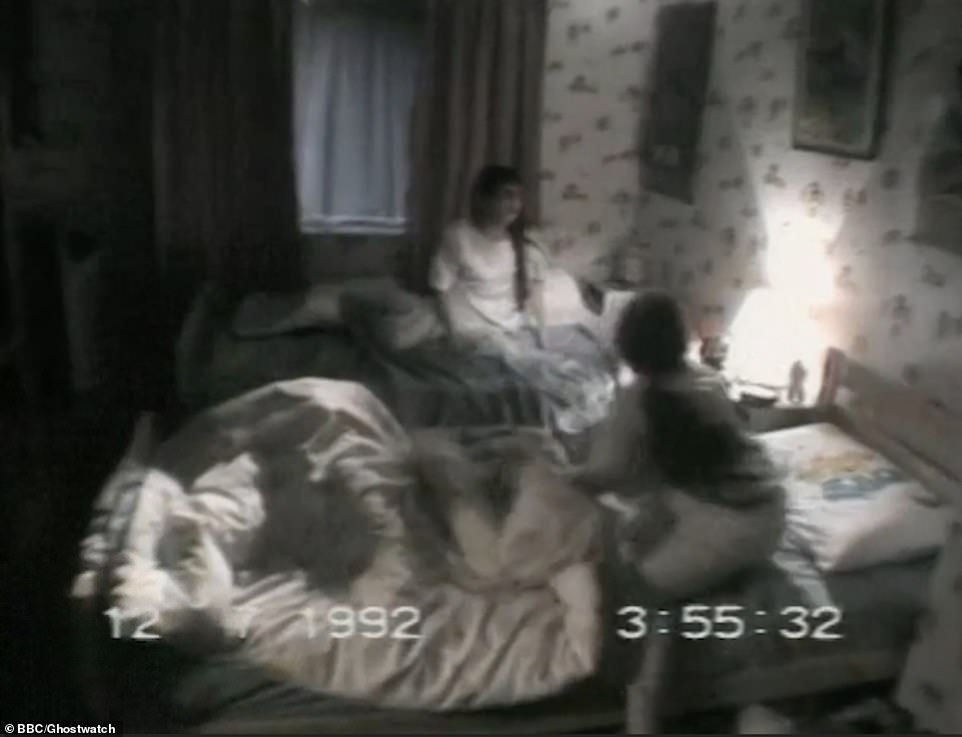 The Enfield case centred around sisters Janet and Margaret Hodgson and the alleged activity of the spirit of a previous occupant of the home they shared with their mother.

Images taken in the girls’ bedroom had shown Janet appearing to levitate as she was allegedly possessed by the poltergeist.

‘Especially around when the poltergeist was active. There definitely was inspiration to look at those pictures, that is for sure,’ she said.

Explaining the premise of Ghostwatch, Mr Volk said: ‘The wraparound story around that is that the full force of the technical, scientific know-how of the BBC for one night only is descending on this house to apply scientific rigour to the one unassailable question that humanity has always had: do we live after death?

‘And how are they going to do it? They are going to apply all the rigour of an outside broadcast to bring you live a ghost hunt.’

He added: ‘For me it setting up a sense of anticipation and hubris. There is these really smug presenters, the BBC itself is incredibly smug. Parkinson is smug. Nobody thinks anything is going to kick off.

At the end of Ghostwatch, Greene was seen being pulled into the cupboard under the stairs by pipes, as the lights in the studio blew out and seemingly panicked staff fled.

The Daily Mail’s news report of the terror invoked by Ghostwatch likened it to Orson Welles’s 1938 radio adaptation of War of the Worlds, which convinced thousands of Americans that aliens were actually invading

Smith could be heard asking after his wife, whilst Parkinson began to sing a nursery rhyme as he became possessed by the voice of Pipes.

Around 30,000 complaints are said to have been made to the BBC.

Explaining when the BBC team realised that viewers were angered by the show, Volk said: ‘We started to get stories filtered back… from the log at the BBC people had phoned in and were quite outraged. Heads must roll at the BBC and everything like that.

‘I think three different women went into Labour that night through shock. I think one priest complained. He thought it wasn’t true but he thought nevertheless, the BBC had raised demonic forces.’

He added: ‘Some people were scared but they were also outraged because they trust the BBC. The nub of their ire was about the fact that it was Aunty.

Ms Manning admitted that viewers may have been duped because she was ‘so pure’ with the use of language that is commonly heard on live television.

‘But it was not what I anticipated. I researched the language of live TV. I researched how I wanted to tell this. And to be rue to the script. All my journey was to make this as powerful a piece of drama as I could,’ she said.

Things took a tragic turn when teenager Martin Denham, who had learning difficulties, took his own life after watching the show. His parents said he had been ‘hypnotised and obsessed’ by it.

A complaint about the BBC regarding the boy’s death was not upheld by the forerunner of what is now TV regulator Ofcom.

Two years after Ghostwatch aired, the Daily Mail reported on the case of two boys who had needed therapy after watching it. 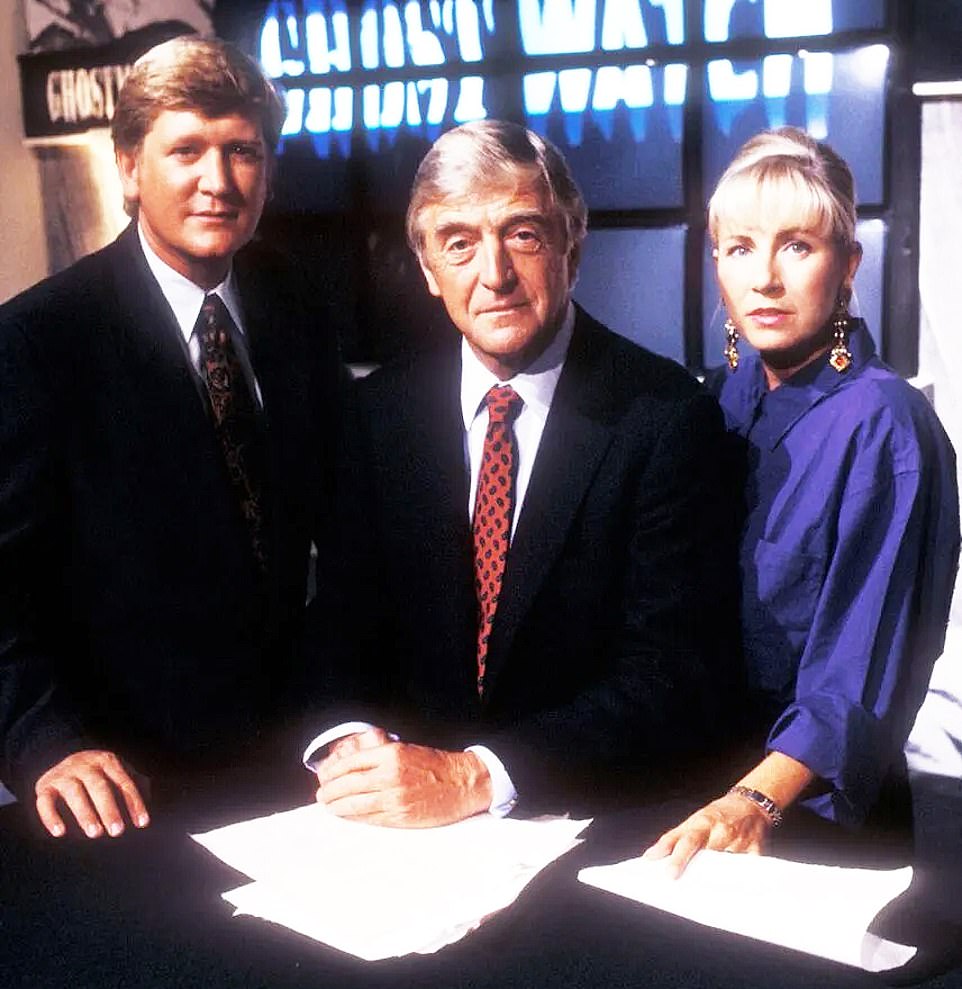 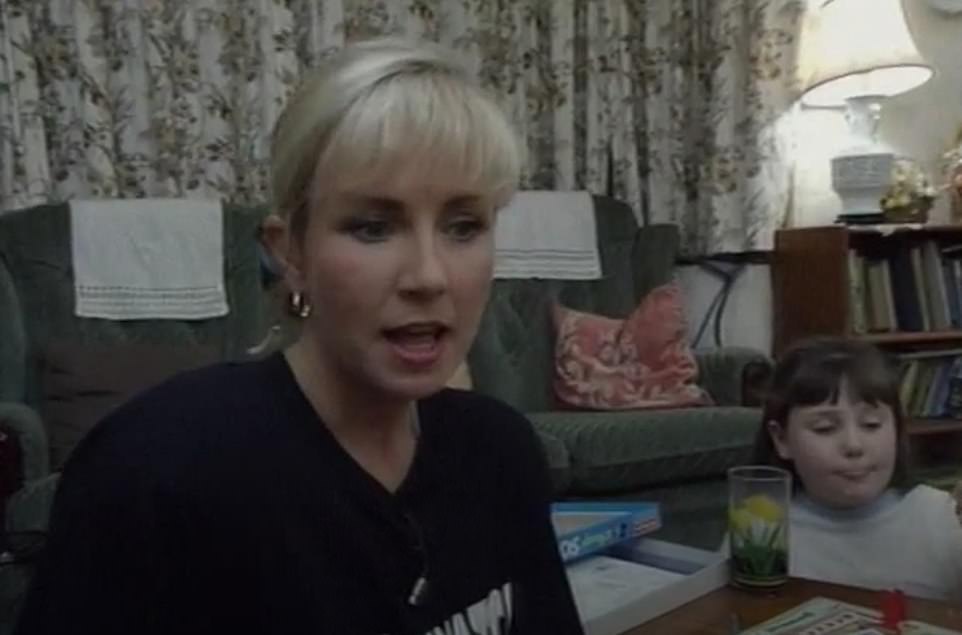 Greene was seen playing herself as she visited the home of Pam Early, who was being troubled by a poltergeist along with her two daughters 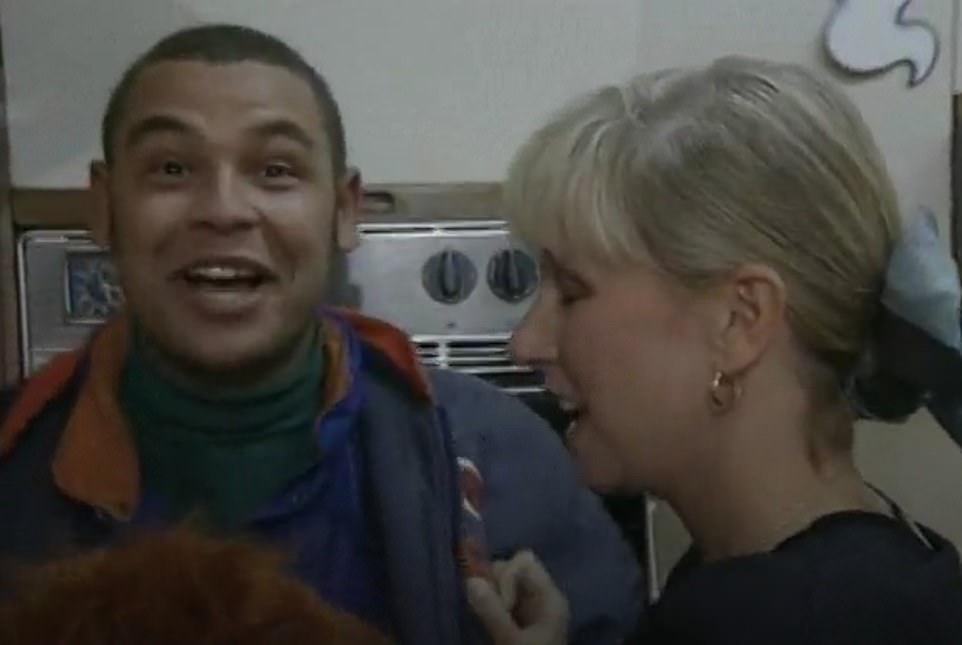 Craig Charles also featured as one of the ‘presenters’. He spoke with neighbours outside the property, and later went inside the home 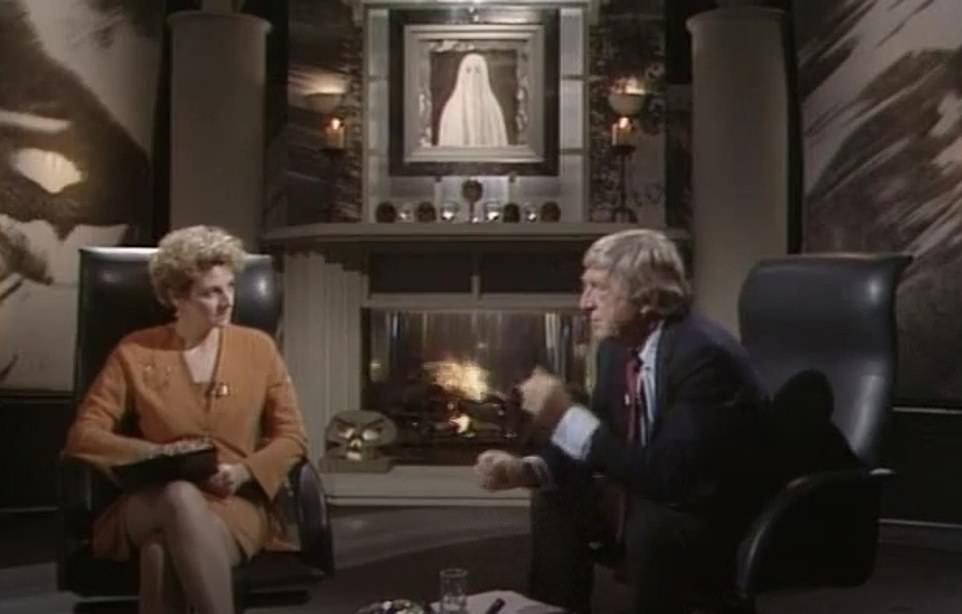 The set-up of the show saw Parkinson presenting from a studio that was made to look like a spooky living room. The mantlepiece of a fireplace was decked out with skulls, whilst a portrait of a ghostly figure was hanging on the wall. Above: Throughout the episode, Parkinson liaised with alleged parapsychologist Dr Lin Pascoe, who was in fact a professional actress called Gillian Bevan

Psychiatrists said the boys suffered nightmares, memory loss and panic attacks and ended up with post traumatic stress disorder – which is more commonly associated with victims of war or crime.

According to a write-up in the British Medical Journal, the boys had ‘problems settling down to sleep, waking at night, nightmares, fear of the dark and sleeping alone, difficulties in concentrating, impaired memory, persistent intrusive thoughts, raised anxiety, panic attacks, depressed mood and irritability.’

Four months after the show had been broadcast, the boys were still affected, prompting their parents to seek medical help.

One of the boys spent time in hospital and needed treatment for eight weeks.

The terror invoked by the programme echoes the furore that Orson Welles’ 1938 radio play based on HG Wells’s War of the Worlds caused.

The dramatisation of the famous novel convinced many Americans that they were actually being invaded by aliens.

Parkinson said afterwards: ‘It just shows what a capacity television has for delusion. I have no concerns whatsoever about the show.

‘It was designed to frighten people, not to make them sit back in their armchairs and laugh.

‘You always get a certain percentage who believe everything on television is real.

‘The great majority who watched that programme would have realised that it was a drama. But if it does for my career what it did for Orson Welles’s career, I shall be delighted.’