How long will your Christmas leftovers be safe to eat?

How long until your Christmas leftovers make you ill? The food that will go off after just two hours vs the grub you can keep for TWO WEEKS

With food typically in plentiful supply, the best way to extend Christmas celebrations is often by enjoying leftovers well into the New Year.

But how long is too long to continue devouring your festive feast?

According to the Food Safety Information Council’s Lydia Buchtmann, the answer is dependent on which – and in what way – the food is being preserved.

‘It’s really risky (to eat) if seafood has been left out for more than two hours, don’t do it,’ she told 3AW.

With food typically in plentiful supply, the best way to extend Christmas celebrations is often by enjoying leftovers well into the new year

However, the advice differs between both meats and food groups.

‘If you’ve got a whole Christmas ham on the bone it’ll keep two weeks,’ she said.

‘You have to handle it properly, you have to take off the plastic wrapping and put it in a clean pillow case…and soak it in vinegar and clean every few days.’

However, timing isn’t the only component to note when it comes to ensuring one-time Christmas dinners are still safe to eat.

With many leftovers, the basic rule to keep hot food hot and cold food cold should be followed thoroughly.

Meats should be placed straight into the fridge, to prevent the risk of food falling into the ‘temperature danger zone’ where bacteria thrives. 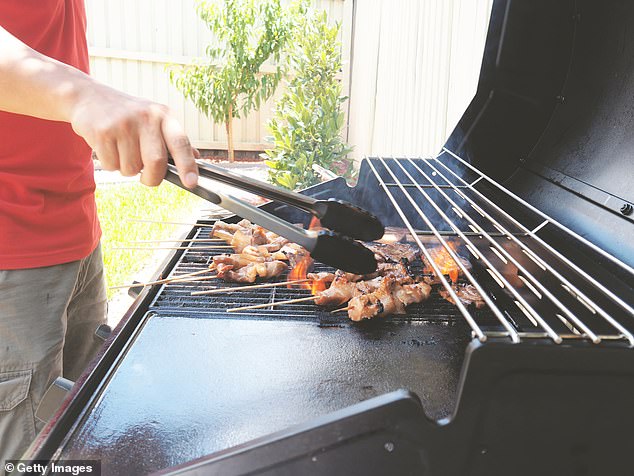 The ‘temperature danger zone’ occurs when food remains between five and sixty degrees celsius, and if it remains there for more than four hours, it’s deemed unsafe.

For chicken it should be cooked entirely through, until juices run clear, and kept at 60 degrees celsius or hotter when ready to serve.

Separate chopping boards should be used when preparing chicken alongside other foods, and raw chicken shouldn’t be washed, as it can increase the chances of cross-contamination.

Leftovers are to be reheated until steaming hot, and stored in the fridge once the chicken stops steaming and must be consumed within 48 hours.