How losing weight could be key to surviving Covid-19

The latest evidence is that most people have no risk of dying from Covid-19.

However, the bad news is the virus probably won’t be eliminated by the lockdown.

Doctors are now saying the findings so far suggest there’s more we can all do to reduce the risk of Covid-19 causing us serious illness.

The latest figures, published last week, show that in more than nine in ten cases, the people who died from Covid-19 had been approaching the end of their life and had caught the virus on top of chronic life-threatening conditions such as heart or lung disease, or dementia.

However, it is now emerging that these statistics conceal a significant but little-discussed risk factor. That is weight and obesity.

Being overweight is the second biggest risk factor for serious illness, behind age. (Stock)

Weight is rated according to body mass index (BMI) — a BMI of under 25 is considered ‘healthy’ while 25 to 29 is classed as ‘overweight’ and 30 or above, ‘obese’. Intensive Care National Audit & Research Centre (ICNARC) data has shown three-quarters of critically ill UK Covid-19 patients were overweight or obese.

Similarly, a study of 4,103 seriously ill Covid-19 patients by New York University, showed while age is the biggest single risk factor for serious illness, obesity is a close second.

With around two-thirds of British adults overweight or obese, Dr Matt Capehorn, clinical manager of the Rotherham Institute for Obesity, a specialist centre for weight management, suggests officials should be alerting the public to this.

‘We have daily health briefings on TV — if they said something along these lines and even if half the population took that on board, it would make a difference,’ he says.

For even if the UK lockdown ends next month, evidence from Japan and elsewhere in Asia indicates we should expect a second wave in the autumn.

Neil Ferguson, an epidemiologist and professor of mathematical biology at Imperial College London also advised people to take responsibility for their own health: ‘We need to assess our risks from a personal perspective, including getting fit and losing weight,’ he said. 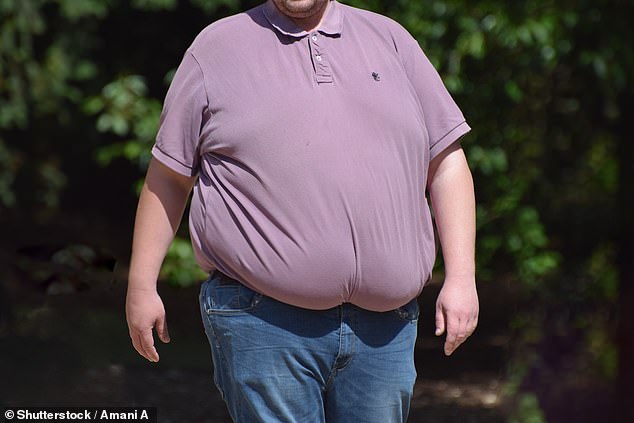 Three-quarters of critically ill people in UK hospitals are overweight, data has revealed. Pictured above is a morbidly obese man (stock image)

Rob Andrews, an associate professor of diabetes and endocrinology at Exeter University, told Good Health that a small weight gain during the lockdown would make limited difference.

But he warned: ‘For future health we would recommend these individuals don’t gain more weight and that they take regular exercise.’

What I wish I’d known: Those affected by Covid-19 share their insights

This week: Gastric symptoms were an early sign. Isla Haslam, 29, a PR consultant, lives in Balham, South London. She says:

When I developed mild stomach cramps a few days after a family get-together six weeks ago, I thought it might be just the effects of some beans I’d eaten in a vegan meal.

Because I had never heard gastric trouble mentioned as a symptom of Covid-19, I didn’t self isolate — in fact, I went to the theatre in the West End. But the next day I became severely unwell with a sore throat and overwhelming fatigue and realised I had the virus. A few days later my mum tested positive for it when she was hospitalised — but she had different symptoms, mainly a cough and shortness of breath — I now know they vary between sufferers.

I was also under the impression that as I was young all I’d have was cold-like symptoms — it was definitely a lot nastier than that. I had to stay in bed for a good week or so.

Excess weight makes it harder for the diaphragm and lungs to expand, which reduces oxygen supply to vital organs. There is also a risk of bacteria and fungi growing undisturbed in the lungs, leading to pneumonia.

‘As your weight goes up there is less ventilation of the lungs and more risk of lung disease — in particular asthma, and increased risk of heart disease and diabetes,’ says Professor Andrews.

Dr Capehorn says overweight people already suffering from sleep apnoea should be made aware of their Covid-19 risk.

Sleep apnoea halts breathing for short periods, as the airway collapses temporarily. This is often caused by fat round the neck area. It is most common in overweight men aged over 40 with a shirt collar size over 16 inches.

When it comes to treatment, overweight people ‘have more difficulty getting enough oxygen because of the weight of extra fat on their airways and are more likely to require extra help breathing with continuous positive airway pressure (CPAP) or mechanical ventilation’, Dr Capehorn told Good Health.

Those put on CPAP — where pressurised air is gently forced into the airway via a mask — may suffer other respiratory problems because of the difficulty of breathing out against the machine; mechanical ventilation — where a tube is inserted into the airway — raises the risk of acute lung damage.

The connection between weight and increased risk of severe or fatal infection with flu-like viruses, was first identified during the 2009 swine flu pandemic, which killed 284,000 worldwide.

The U.S. has the world’s worst obesity problem but Scotland is close behind: more than 20 per cent of Europe’s swine flu deaths occurred there.

By contrast, Japan, where just 2 per cent of adults are obese, experienced no deaths. 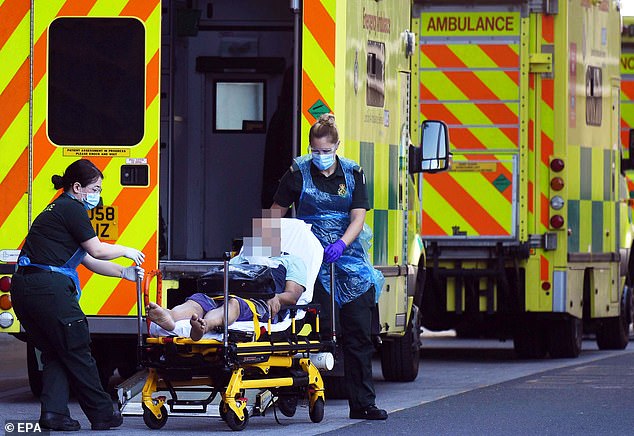 Meanwhile, Italian doctors found the complications of Covid-19 experienced by overweight people can be reduced by nursing them face down.

Remember to clean your hands before and after going to the shops, says hygiene expert Professor Sally Bloomfield. Don’t take a paper receipt and use your car key to punch numbers into a chip and pin machine, she adds. Then use hand sanitise

As Fredrik Karpe, a metabolic medicine professor at the University of Oxford, explained in The Sunday Times last week: ‘If you have a big belly when you lie down, the weight pushes your diaphragm upwards reducing lung volume. This virus is all about lung function.’

However Professor Andrews says suitable beds are not always available.

Despite the ICNARC statistics, a spokesman for Public Health England insisted: ‘We don’t know if this [correlation] is due to obesity alone or because people who are living with obesity are more likely to have co-morbidities such as type-2 diabetes, heart disease or respiratory diseases.’

Dr Capehorn is, however, quite clear. He says: ‘It seems [Covid-19] is with us to stay and the lockdown is a precious opportunity to find ways to improve our health while we are able.’