How ‘masculine’ words can keep women from applying to jobs

When a job opens up, many factors come into play when it comes to deciding who will fill the coveted spot: a solid resume, years of experience, special skills—but it turns out the job posting, too, plays in the role in determining who might get picked.

Words deemed as ‘masculine’, such as ‘confident’, ‘aggressive’, and ‘persistent’, can discourage women from applying to jobs even if they are qualified for them.

Men, on the other hand, are less impacted by the presence of words deemed ‘feminine’ in job postings, meaning word choice is less likely to keep them from putting their name in for a job, research suggests.

Meaning: A majority of job listings display a gender bias. Words such as ‘decisive’ and ‘confidence’ (pictured in a current posting) can be deemed to have a masculine connotation Effect: This wording can in turn have an impact on the pool of applicants, by deterring women from applying to listings that feature one or several ‘masculine’ words (stock picture)

‘Much research has documented that certain words can contribute to a sense of belonging to a certain domain, role, and job, therefore discourage certain type of people from applying, in this case, women,’ Oliver Cooke, the head of North America at Selby Jennings, a recruitment firm, said.

Words such as “confident”, “aggressive”, “individual” and “persistent” are commonly used in job descriptions, and could be seen as ‘traditionally male attributes’, he noted.

Business, science and engineering, technology, as well as finance and insurance, are among the industries with the most gendered words in their job advertisements, according to a past study by ZipRecruiter.

Ninety-six participants, including both men and women, rated their interest in various job postings using ‘masculine’ and ‘feminine’ language as part of a 2011 study by the American Psychological Association.

Adjective: ‘Confident’ is one of several words commonly used in job descriptions that can be viewed as masculine, Oliver Cooke, Head of North America at Selby Jennings, told Femail

Skills: ‘Ninja’, which has become a commonly used word in the tech world, can also take on a masculine undertone, Cooke noted

On a scale of one to seven, female participants rated the appeals of various jobs as a little more than four when the postings were ‘masculinely-worded’, and 4.5 when they were ‘femininely-worded’.

Using the same scale, male participants rated the appeal of the jobs as a little above 4.5 when the ads were ‘masculinely-worded’, and a bit more than four when they were ‘femininely-worded’.

Participants were also made to rate their anticipated feeling of belonging based on the job posting, using sentences such as ‘I could fit in well at this company’, ‘I’m similar to the people who work in this career’, ‘My values and this company’s values are similar’, and ‘The type of people who would apply for this job are very different from me’.

The study found that men displayed only a ‘slight preference’ for job listings matching their gender, and that gendered wording didn’t affect how much they felt like the would belong in that position.

On the contrary, increases in ‘masculine wording’ made jobs look less appealing to women, and decreased their feelings of anticipated belonging, the study found.

‘This latter finding supports our contention that masculine wording reflected in real job advertisements primarily serves to keep women out of the areas that men typically occupy,’ the study noted.

All in all, whether someone will apply to a job or not is determined in a large part by how they view themselves.

‘It’s essentially about the fact that just as we tend to apply for jobs we think are within our domain of expertise, we apply for jobs that have words in the advertisement by which we would describe ourselves,’ Cooke said. 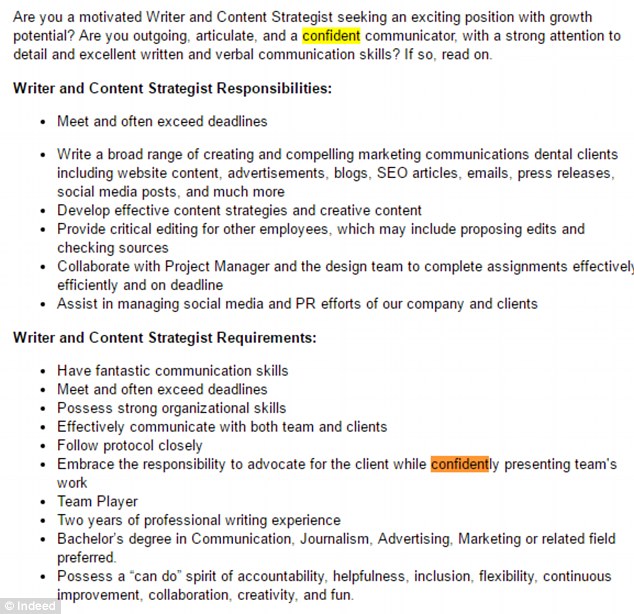 Impact: increases in ‘masculine wording’ made jobs less appealing to women, and decreased their feelings of belonging, a study by the American Psychological Association found

Adding to the discrepancy between male and female applicants is the fact that men are ‘more ambitious’ when considering possible jobs, Cooke noted.

‘Men tend to apply for jobs that are beyond their current experience or skill set level, whereas research has shown women will be more realistic in applying for ads they know they are a good fit for,’ he said.

While language has an impact on who decides to apply, this doesn’t mean that women can’t, or don’t, display any of the traits listed as masculine, and vice versa.

‘Looking at unconscious gender bias doesn’t mean that a woman can’t or shouldn’t be confident or persistent—or likewise a man can be caring or collaborative,’ Cooke said.

In order to foster diversity, recruiters might want take a second look at their job postings and evaluate how much gendered wording they contain.

Then, one solution, according to Cooke, is to ensure the listings contain both ‘masculine’ and ‘feminine’ words. Gender-neutral options can also be subbed out.

So, which words should they look out for?

‘Active’, ‘adventurous’, ‘boast’, ‘decisive’, ‘dominant’, ‘force’, ‘outspoken’, ‘persist’, ‘stubborn’, and ‘superior’ are all among the list of ‘masculine words’ singled out by the American Psychological Association in its study.

Taking measures: In order to foster diversity, recruiters can take a second look at their job postings and evaluate how much gendered wording they contain

Gender diversity has a positive impact on how companies perform, and is correlated with more profitability, research has shown.

Companies in the top quartile of gender diversity at the executive level had a 21 per cent chance of being more profitable than companies located in the fourth quartile, and a 27 per cent chance of creating more value, according to a report published earlier this year by the management consulting firm McKinsey & Company.

Gender diversity, or a lack thereof, can also have a profound impact on a company’s structure, and who rises to the top.

‘If the majority of leadership are male with overtly traditional male characteristics, the culture at the bottom will likely be the same and vice versa,’ Cooke said.

‘Unfortunately for most of the business world despite some progress having been made in recent years there is still a disproportionate amount of men in leadership roles.’

EXAMPLES OF ‘MASCULINE’ AND ‘FEMININE’ WORDS IN JOB LISTINGS