Meghan Markle will arrive in Wellington, New Zealand, on Sunday afternoon, as she continues her royal tour with husband Prince Harry.

This will not be the Duchess of Sussex’s first trip to the island, but it will be markedly different from the way she saw it last time.

In 2014, the then-Suits actress and founder of now defunct lifestyle website The Tig took a two-week road trip through New Zealand in a camper van, visiting both the country’s North and South Islands.

In 2018, she will be on a royal tour, meeting dignitaries and greeting an adoring public. She will attend formal dinners, be escorted around by a bodyguard, and will be expected to dress in a very different way.

In 2014, the then-Suits actress Meghan Markle travelled to New Zealand in a camper van visiting both the North and South Island (pictured after hiking at Franz Josef Glacier) 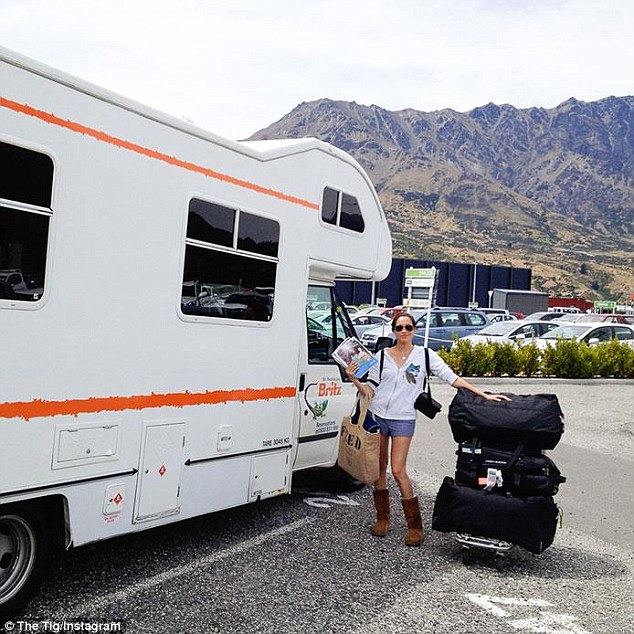 It was Meghan’s first experience of ‘camper vanning’ (pictured in 2014), which she swiftly fell in love with – also praising the ‘staggering’ New Zealand scenery

The Duchess of Sussex is set to land in Wellington on Sunday afternoon to tour the country in a very difference way, with husband Prince Harry

Taking the advice of her Suits co-star, Gabriel Macht, who played Harvey Specter in the cult series, Meghan rented a camper van with a friend in 2014 and travelled from the South Island all the way up to Waiheke, the island just off Auckland.

‘I didn’t even know it was a verb,’ the Duchess joked to Conde Nast Traveller of the activity ‘camper vanning’ at the time.

‘I was told to let go of my impressions of RV culture in the U.S, that it was a totally different thing in New Zealand,’ she added.

Meghan said living out of the van appealed to parts of her childhood, and the road trips she had gone on with her dad and Girl Scouts she had done with her mother.

The actress recalled that the campsites were impeccably kept – ‘there were even fresh flowers in the bathroom,’ she said – and the scenery was like nothing she had seen before – ‘staggering’, in fact. 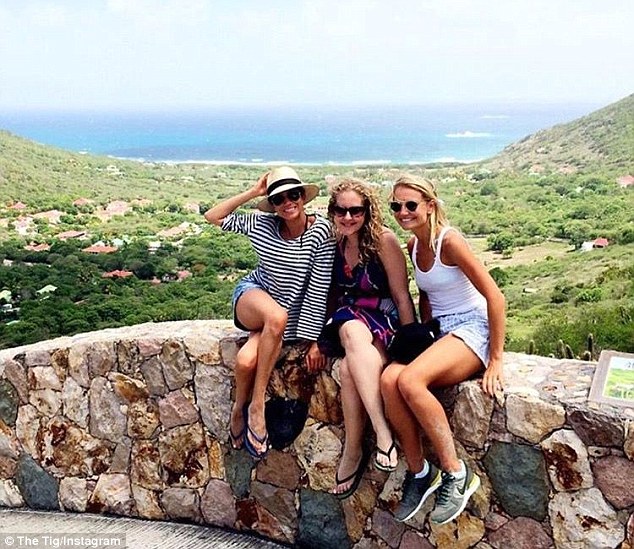 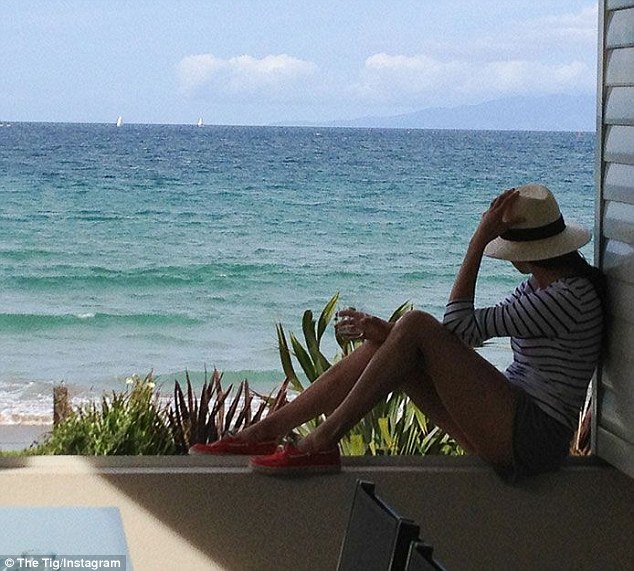 Meghan said that camper vanning appealed to parts of her childhood, and the road trips she had with her mother (pictured in New Zealand) 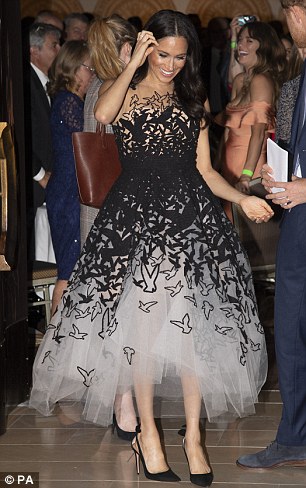 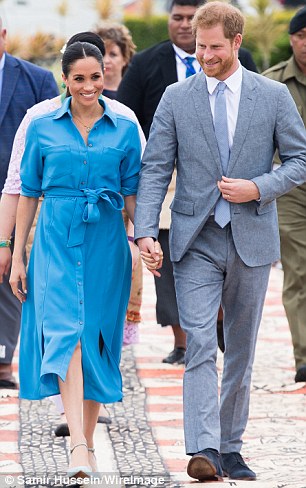 While she spent a great deal of time in her 2014 trip wearing Ugg boots and denim shorts, the dress-code for her 2018 trip will be markedly different (pictured: the Duchess of Sussex at theAustralian Geographic Society Awards in Sydney on Friday, left, and leaving the airport in Tonga with husband Prince Harry earlier that day)

In a travel diary from the time, she said she dined out in ‘standout restaurants’ like Botswana Butchery and Vudu Cafe and Larder in Queenstown, before going fly fishing and eating ‘freshly-baked cookies’ in Cinema Paradiso while visiting Lake Wanaka.

Meghan went hiking up Franz Josef Glacier and visited seal colonies, she toured cult wineries in Marlborough and even went swimming with dolphins on the southern coastline.

‘After ten days in a camper van, you may want to end your trip with something a bit more spacious (as I did),’ Meghan told Conde Nast Traveller.

And so, she ended her 2014 trip with a stay in a ‘bach’ (or holiday home) on the island of Waiheke, dining out at Mudbrick Winery and sipping Sauvignon Blanc as the sun went down. 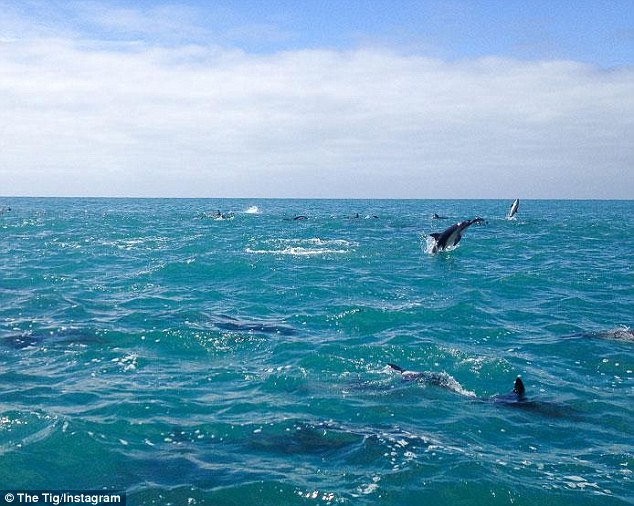 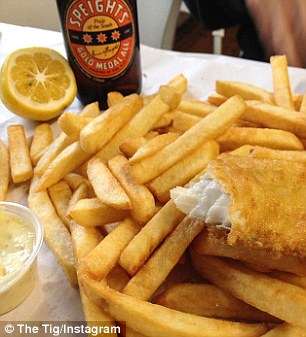 Meghan travelled light – with just three duffel bags (left, a snap from her Instagram account at the time) – she also roughed it and ate fish and chips and drank beer while on the road and posted this picture to social media 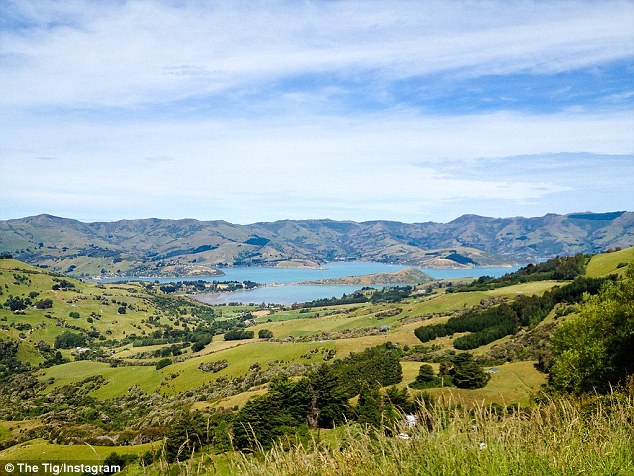 Her time in New Zealand as a Duchess will no doubt be worlds away from what she experienced in 2014.

While there on her own terms, the actress travelled with just three duffel bags. The upcoming tour will see Prince Harry and the Duchess of Sussex travel with endless luggage.

Meghan Markle will need a different outfit for every outing, as well as backup outfits, which have been all meticulously planned in advance.

She won’t spend a minute in a camper van, and is unlikely to come near any campsites.

When they visited New Zealand in 2014 with baby Prince George, the Duke and Duchess of Cambridge enjoyed some time out before their trip Down Under in Wharekauhau Lodge just outside of Wellington.

The residences, which normally cost $710 per person per night, boast every conceivable luxury including heated marble floors, walk-in wardrobes, and baths big enough to swim in with stunning views of the countryside. 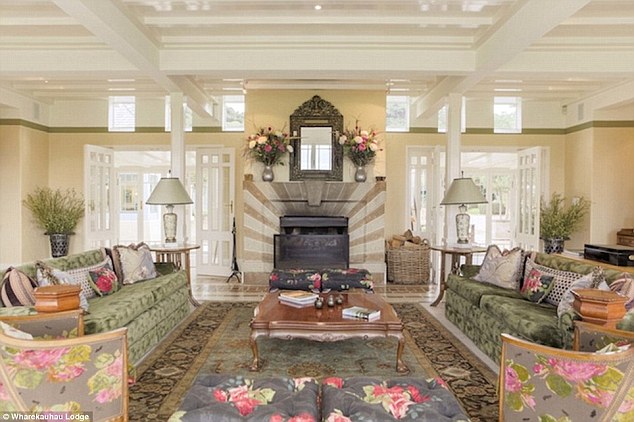 The residences, which normally cost $710 per person per night, boast every conceivable luxury including heated marble floors, walk-in wardrobes, and baths big enough to swim in 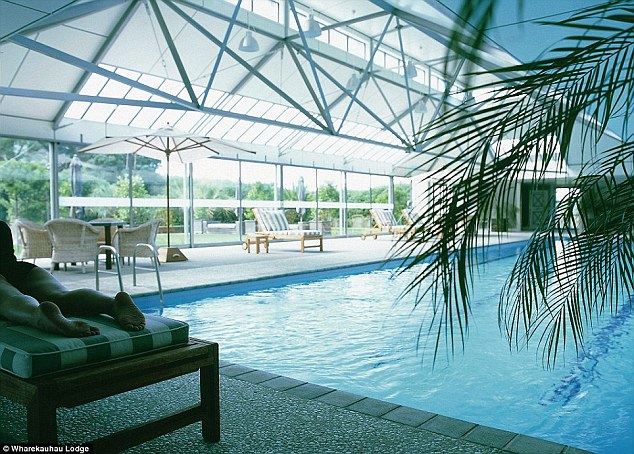 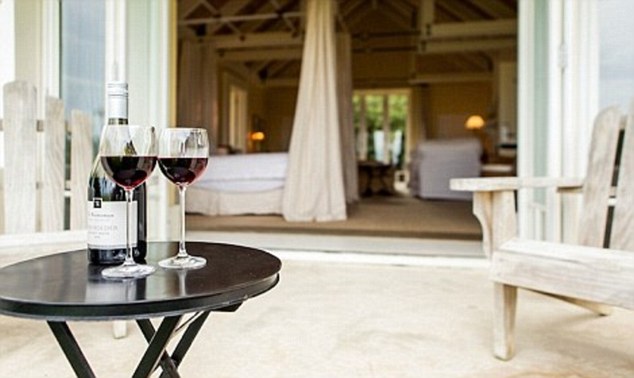 If they visit, the Duke and Duchess of Sussex may enjoy rare and expensive New Zealand wines at luxury lodges (stock image)

The Royal couple will spend most of their time in Wellington and Auckland (stock image: Wharekauhau Lodge just outside of Wellington)

The location – which has been named as one of New Zealand’s grandest residences and is regularly named among the world’s top 20 resort hideaways – could be a destination for Prince William’s younger brother and his wife.

The Royal couple may also visit the stunning turn-of-the-century clapperboard Government House in Wellington, the official residence of the Queen’s representative in the country.

Harry and Meghan boarded a flight from Sydney on Sunday morning, joined by Invictus athletes from New Zealand.

When they land at Wellington about 3pm local time, the Duke and Duchess of Sussex will be greeted with a Haka and a 21-gun salute.

With Australian beaches and Pacific climates behind them, Prince Harry and Meghan can expect nippier weather when they touch down on Sunday afternoon.

During their four days in the Land of the Long White Cloud, the Duke and Duchess will visit a kiwi bird breeding centre, see some of the country’s most majestic environs in the South Island’s Abel Tasman National Park, and even join in a gumboot-throwing contest.

They’ll also take in some of the local culture, with a few formal welcomes by iwi – or tribes – on the schedule.

Continuing their work in Australia, many of the royal couple’s engagements across New Zealand will include a focus on mental health, youth and the environment.

They will depart on Thursday, ending their 16-day tour across the region.