How men are getting the prostate cancer message

Doctors and charities yesterday welcomed figures which suggest men are finally getting over the embarrassment of prostate issues and getting themselves checked.

Diagnoses shot up by a fifth in 2018 – from 41,201 to 49,029 – overtaking breast cancer and making prostate the most common cancer in England for the first time.

But cancer specialists last night said that while this growing awareness is a significant cause for celebration, deaths will continue to rise until the NHS has a programme which means men are routinely checked.

Professor Hashim Ahmed, of Imperial College London, said: ‘Unless we have a co-ordinated effort and a serious discussion about screening we are just going to limp along, relying on people raising awareness.’

Earlier diagnosis means men have a much better survival chance, yet for years men have been far too slow to report symptoms – too embarrassed and too scared to go to their GP.

In 2018, that began to change and men started talking about the disease as never before.

Experts attribute this to celebrities such as Bill Turnbull and Stephen Fry who spoke about their own prostate cancer.

Act early and stop disease in its tracks

One of the warning signs of prostate cancer is going to the toilet more often, particularly at night. As are taking longer to go to the toilet, starting and stopping, pain, a burning sensation and blood in the urine.

The quicker you act the more likely you are to survive. Men over 50 can request a free PSA test – which measures the level of prostate-specific antigen in the blood. A high reading can be a sign of cancer.

But the test is not wholly accurate. Your GP will carry out other examinations before deciding whether you should see a specialist. Most men with high readings will then have a biopsy.

Prostate cancer mostly affects men over 50. Those whose fathers or brothers have had it are two-and-a-half times more likely to be diagnosed.

Men are also at risk if their mother or sister has had breast cancer under the age of 60 as it is caused by the same genes. Black men are more likely to get prostate cancer, as are men who are overweight or obese.

Experts stressed that greater awareness still relies on men taking the initiative and going to their GP if they have symptoms.

A better system would be routine screening – in which every man of a certain age is invited for a test, whether they have symptoms or not.

This currently exists for breast cancer but prostate tests are not yet good enough. Advances in MRI scanning show promise but are still being tested.

Instead men are left to request a PSA blood test from their GP – which they are eligible for from 50.

This is far from accurate and, even if it raises red flags, a biopsy follows which itself can be inaccurate.

Professor Ahmed said: ‘We should be formalising a really robust [testing] strategy to make sure aggressive prostate cancer is picked up.’

Professor Stephen Powis, of the NHS, said: ‘The NHS Long Term Plan is accelerating action to detect and treat more cancers at an earlier stage when the chance of survival is highest.’

Cycling injury that led to diagnosis

Iain Leighton only learned he had prostate cancer when he went to the doctor for a cycling injury. But early diagnosis meant he was treated before it spread.

The retired lawyer, whose father died of the disease 20 years ago, yesterday said he was now tumour-free and in ‘excellent health’.

Mr Leighton, 68, said: ‘We all have to take our cars for an MOT every year, so why not do that for ourselves? We men on the other hand have needed to get over certain taboos. But we don’t need to be awkward about it just because it involves you-know-what down there.’

In spring 2017, Mr Leighton had been riding his bike when he fell off, injuring his groin. 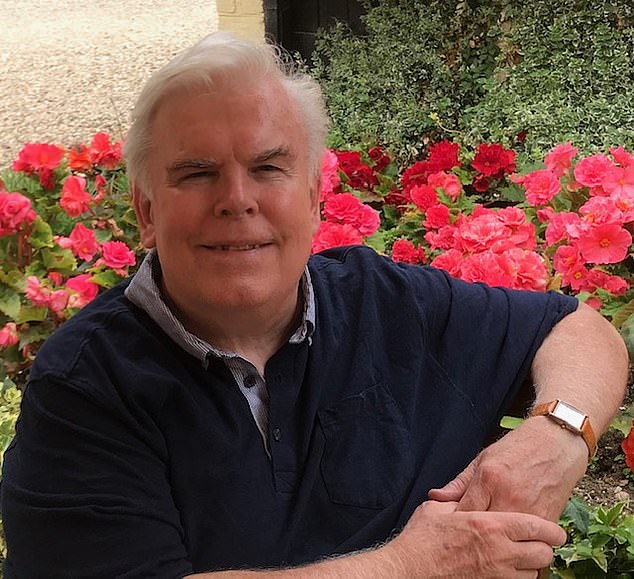 Iain Leighton, 68, (pictured) only learned he had prostate cancer when he went to the doctor for a cycling injury. But early diagnosis meant he was treated before it spread

The locum at his local surgery noticed his previous prostate-specific antigen (PSA) test – which signals any change in the size of the prostate – six months earlier, had been slightly elevated.

She suggested they check it again – and within 48 hours he was sent for a biopsy. Mr Leighton said he almost ‘fainted’ when the tests came back positive.

He underwent 11 weeks of radiation and was placed on a three-year course of hormone drugs.

With his treatment set to end later this year, Mr Leighton, from London, said: ‘I’m a prostate cancer survivor – and an exceedingly healthy one now as well. But I was lucky because it was caught early.

‘There’s no reason for a man to die from prostate cancer now as long as they just go and get tested. We men must speak frankly and not be embarrassed about it.’