President Trump could potentially be forced to relinquish executive control to Vice President Mike Pence or be replaced on the GOP ticket altogether, if he becomes incapacitated from COVID-19.

The president confirmed on Friday that he and First Lady Melania tested positive for coronavirus after traveling with counselor Hope Hicks, who fell ill earlier on Thursday.

‘Tonight, @FLOTUS and I tested positive for COVID-19. We will begin our quarantine and recovery process immediately. We will get through this TOGETHER!’ he tweeted.

Trump is 74 years old, putting him at higher risk of serious complications from the highly infectious disease.

With the presidential election less than 32 days away, the positive result means the government may have to consider contingency plans in line with the Constitution, should the president become too ill ahead of November 3.

The 25th Amendment states that the vice president should replace the commander-in-chief in the event he or she is unable to continue his term.

If the VP is also unable to assume control, the powers are then delegated to the Speaker of the House, in this case, Nancy Pelosi.

However, the looming election further complicates the matter, as the Democratic and Republican national committees could also pick a replacement to run on their party’s ticket if the president were to withdraw.

The committee could choose to nominate the vice presidential candidate, or another member of their party.

The selection process would depend on the parties’ respective bylaws.

Under this scenario, all 168 members of the RNC would have to meet to vote on Trump’s replacement. 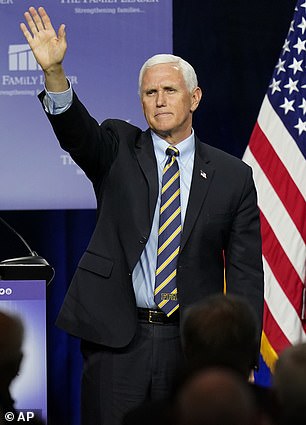 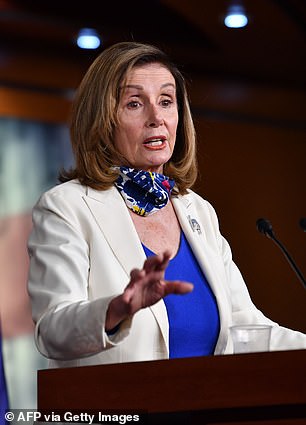 Line of succession: Under the 25th Amendment, Vice President Mike Pence is next to assume executive control if the president cannot finish his term. The Speaker of the House, Nancy Pelosi, is second in line, if neither the president nor VP can take over

The scenario, although hypothetical, would be the first of its kind since no presidential candidate of either party has ever died or withdrawn before an election.

The White House had earlier distributed a schedule for Friday that showed he planned to go forward with a fundraiser at his Washington, D.C., hotel and a political rally in Sanford, Florida.

Confirming the news of Hicks’ positive test earlier in the evening Trump had told Fox News: ‘Whether we quarantine or whether we have it, I don’t know.

‘I just went for a test and we’ll see what happens.’

He later tweeted to confirm he and Melania were in quarantine, writing: ‘Hope Hicks, who has been working so hard without even taking a small break, has just tested positive for Covid 19. Terrible! The First Lady and I are waiting for our test results. In the meantime, we will begin our quarantine process!’ 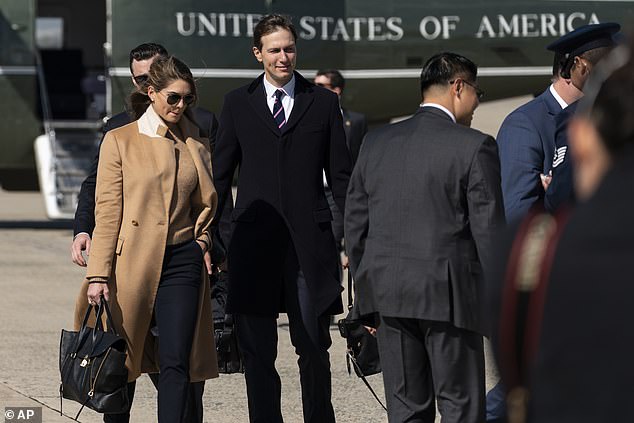 WEDNESDAY: Counselor to the President Hope Hicks, left, with White House senior adviser Jared Kushner, walk from Marine One to accompany President Donald Trump aboard Air Force One as he departs to a rally in Minnesota. It was on the way home from this trip that Hicks is said to have first shown symptoms of the virus

Hicks began feeling mild symptoms during the plane ride home from a rally in Minnesota Wednesday evening, according to an administration official, who spoke to the Associated Press on condition of anonymity to disclose private information. She was quarantined away from others on the plane and her diagnosis was confirmed Thursday, that person said.

Hicks had traveled with the president multiple times this week, including aboard Marine One, the presidential helicopter, and on Air Force One to the rally in Minnesota Wednesday.

Since then, the president traveled to and from his Bedminster, New Jersey golf resort to take part in two campaign events and then flew back to the White House this evening.

His social media director Dan Scavino and press secretary Kayleigh McEnany, who were originally set to join him on the Thursday trip, were replaced at the last minute by other aides.