How mismanagement and over-expansion built up the £1.6bn debt mountain threatening Thomas Cook

As the travel industry evolved worldwide and online start-ups sprang up challenging existing providers, Thomas Cook ploughed on with a high street business model which became less and less sustainable.

By 2012 the company had been mismanaged so badly it had to undertake a restructuring which left it £1.6bn in debt, comprised of a £1bn bond and a £600m overdraft.

The deal meant the troubled firm had to sell 300 million holidays a year just to make its interest payments and break even – leaving it horribly exposed to further market fluctuations.

Last year a UK heatwave, coupled with depressed consumer spending caused by fears over Brexit and the continued increase in online competition, created a perfect storm of low demand and over-supply.

The company was on the brink. 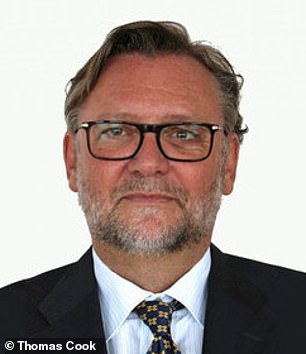 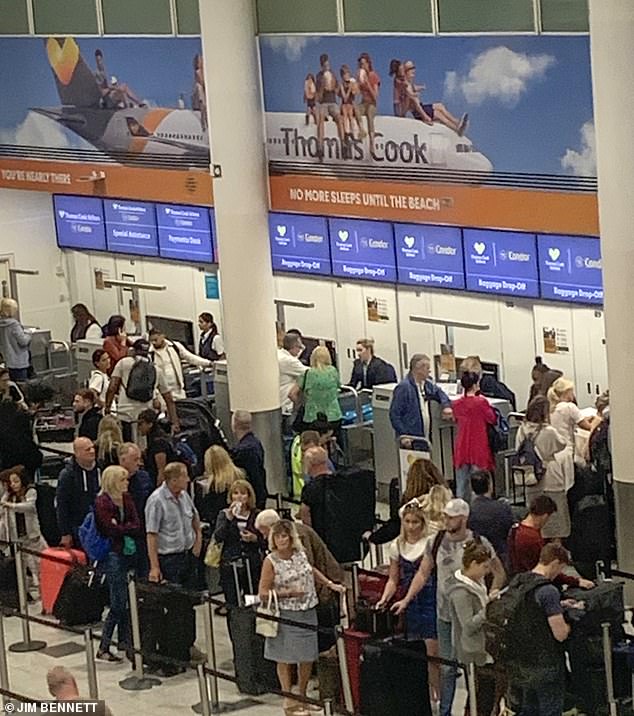 Then a month ago the directors, including CEO Peter Fankhauser, and CFO Sten Daugaard – who has only been in place since December of last year – thought they had done a deal which would keep the company afloat.

On August 28, the Group released a statement explaining they had £900m of new money coming in – half from a Chinese consortium and half from their British-based banks and lenders.

They had also agreed that banks would convert most of the money the company already owed into equity in a restructured Thomas Cook – which should have given the troubled firm some breathing room.

Subject to final sign-off from all parties concerned, that deal would have come to fruition next month.

But then, the company says, last week one of the lenders, RBS, got cold feet.

The firm says the bank demanded an additional £200m ‘seasonal stability facility’ to cover the winter lull in business in the tourism industry.

And it is that demand, for another £200m on top of the £900m, which has led some to predict financial ruin could come as soon as this weekend.

That would mean the closure of 550 high street stores, the loss of 22,000 jobs, 180,000 holidaymakers stranded overseas, the biggest peacetime repatriation in British history, and a £600 million bill for the DfT who would be left picking up the pieces and flying tourists home. 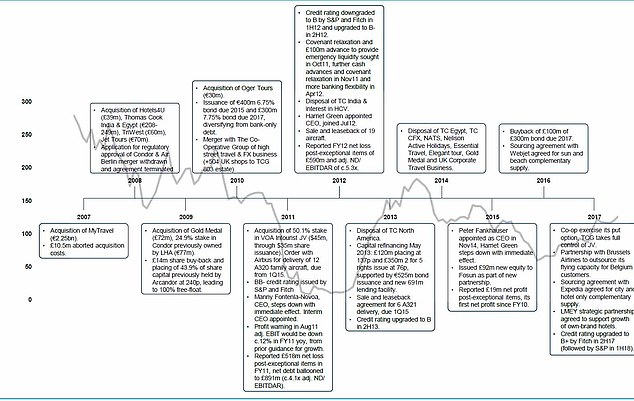 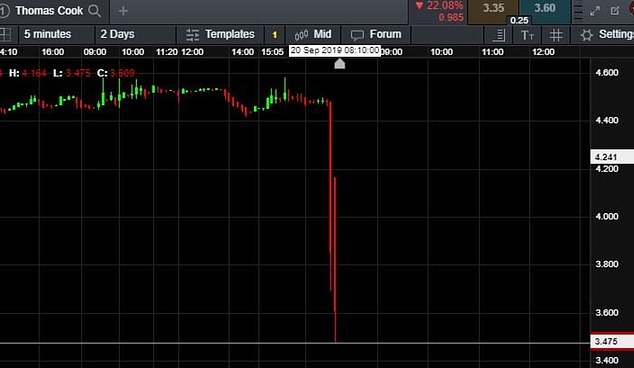 The company made money in 2015, 2016 and 2017 and credits its success to the new team brought in after the departures of previous bosses, chief exec Harriet Green in 2014 and group chief executive Manny Fontenla-Novoa in 2011.

But the last two years have seen a constant stream of bad headlines in the financial pages.

The travel company scrapped its dividend last year in an effort to retain cash and blamed a disappointing year on the prolonged summer heatwave across Europe, which meant people delayed their bookings, especially in the UK.

Many travel firms also had to discount their packages heavily in the late booking market.

In late 21018 analysts feared the firm was facing structural challenges – beyond the one-off problems caused by the unusually hot summer – that would require significant changes to operations, including the likelihood of further closures in its large branch network.

During financial year 2017-18 the firm closed 100 stores it said were loss-making.

It said it has no plans for more closures or job losses, but it intends to add more in-store foreign exchange staff to boost branch profitability.

The concerns among investors were exacerbated when the firm gave a vague outlook for 2019 adding to fears over the impact of Brexit or another crisis in an important package holiday destination such as Turkey.

The now-chief executive, Peter Fankhauser, and his new chief financial officer, Sten Daugaard, met with investors in December worried about the firm’s financial strength and strategy. 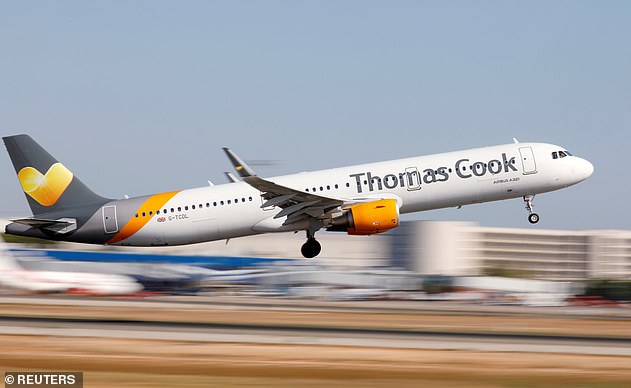 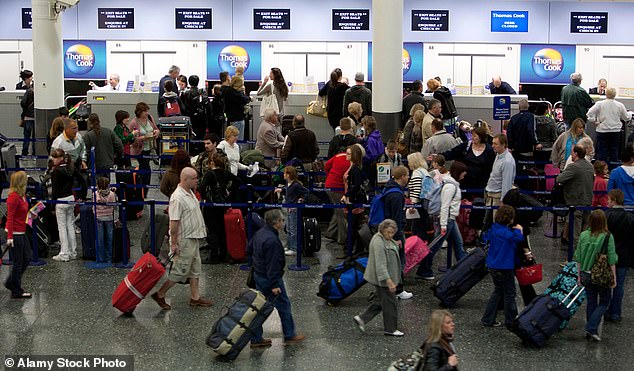 A collapse would leave 180,000 customers stranded abroad – and dash the plans of thousands of families who have booked holidays (Thomas Cook desks at Gatwick earlier this month) 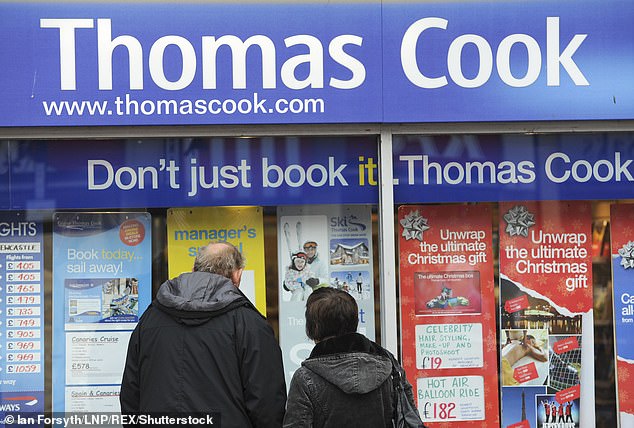 A couple look at holiday offers in the window of a Thomas Cook branch in Redcar. Tens of thousands of customers could be left stranded abroad if the firm goes bust

Then this May shares in Thomas Cook plunged 30 per cent after analysts at a bank said the travel firm’s shares were ‘worthless’.

Thomas Cook’s tour operations and airline were worth £738m at the time but with debt valued the same that ‘implies zero equity value’, Citigroup told the BBC.

Citigroup’s damning conclusion came a day after Thomas Cook issued its third profit warning in less than a year and reported a £1.5bn half-year loss.

Its outlook was ‘significantly weaker than expected,’ Citigroup said.

Last night, RBS denied that it was responsible for putting pressure on the deal. A spokesman said: ‘We don’t recognise this characterisation of events.

‘As one of a number of lenders, RBS has provided considerable support to Thomas Cook over many years and continues to work with all parties in order to try and find a resolution to the funding and liquidity shortfall at Thomas Cook.’

How troubled Thomas Cook has come to the brink of bankruptcy

Why is Thomas Cook in such a state?

Bosses have blamed Brexit uncertainty but the reality is it has become saddled with a £1.6 billion debt mountain after years of mismanagement and over-expansion. In July, the firm announced it had struck a rescue deal led by its biggest shareholder, Chinese conglomerate Fosun International, as well as its banks. Together they agreed to stump up £750 million to save it from bankruptcy. This emergency injection was topped up by another £150 million from other key backers including hedge funds, to see it through the winter.

Isn’t that enough to keep it afloat?

Thomas Cook’s lenders, led by Royal Bank of Scotland and Lloyds, are demanding another £200 million or they will pull the plug on the deal. The banks have already handed Thomas Cook a £675 million overdraft and are running out of patience. They fear the firm still does not have enough cash to tide it over during the off-peak season, including to pay suppliers and hoteliers. This has resulted in a stand-off, with Fosun and Thomas Cook’s hedge fund backers refusing to pay up, and the banks unwilling to budge.

Why can’t they just bide their time?

Thomas Cook bosses fear they will have to call in the administrators within days if neither side agrees to stump up the funding. It is a criminal offence to continue trading – and to take holiday bookings – when insolvent. Another reason the crisis is coming to a head is Thomas Cook’s Atol licence is up for renewal on October 1. Every company is required to hold an Air Travel Organiser’s Licence issued by the Civil Aviation Authority. Travel companies also have to put down deposits for hotel bookings for the following summer by October 1 – another reason why Thomas Cook’s position is so precarious.