Ten years after the nation was captivated by the story of a six-year-old boy apparently whisked away in a weather balloon, it has been revealed how the child’s mother kept a diary of the scam and gave it to her attorney to ‘save herself’ without her husband’s knowledge.

For two difficult hours on October 15, 2009, the world watched as a silver helium balloon drifted at heights of up to 7,000 feet across the skies of Colorado – wondering if Falcon Heene could survive.

Hours after a frantic search, which grounded planes and involved a National Guard helicopter, Falcon was found hiding in the fame-seeking family’s home in Fort Collins, Colorado.

His parents, Richard and Mayumi were later sentenced to prison for what was declared a hoax.

Now, ahead of the 10-year anniversary of the hoax, it has been revealed that Mayumi kept at least 12 pages of handwritten notes detailing a day-by-day lead up to the incident, according to 5280.com.

At the time of the incident, the family’s pitch for a science-based reality show had been rejected.

Ten years after the US was captivated by the story of six-year-old, Falcon Heene (center), who was thought to have been whisked away in a weather balloon, it has been revealed how the child’s mother, Mayumi (pictured with her kids and husband, Richard) kept a diary of the scam 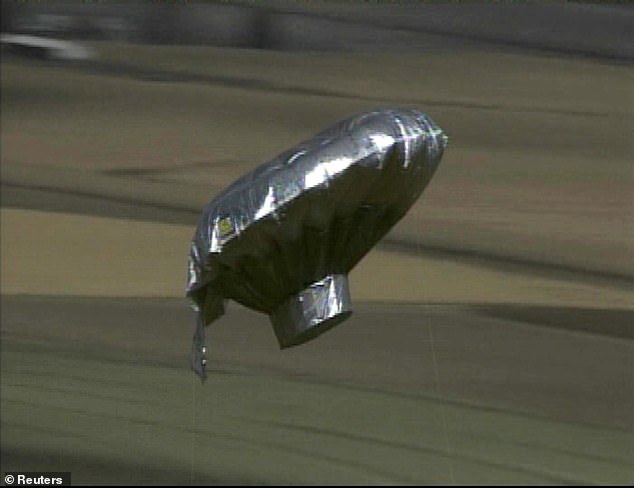 For two difficult hours, the whole world watched as a silver helium balloon (pictured) drifted at heights of up to 7,000 feet across the skies of Colorado – wondering if the little boy could survive 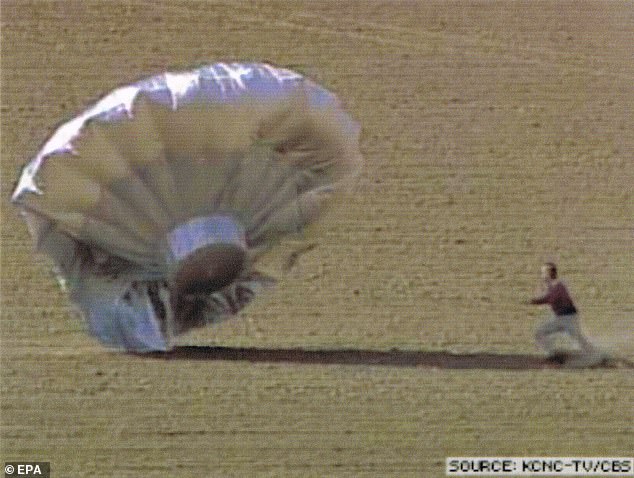 A law enforcement officer was captured running toward the home-built helium filled balloon as it landed near the Denver, Colorado, airport on October 15, 2009

Mayumi told investigators that her husband wanted attention for the show and a runaway balloon with a child inside could be just the thing.

The pages of Mayumi’s diary were reportedly given to her attorney.

On the first page, dated for April 27, 2009, Mayumi talked about a production company rejecting the pitch.

‘What could we do to help them?’ Mayumi wrote. ‘They wouldn’t put up money, but we can do our own project…. Then they can make a “one-off” out of it,’ she added, according to 5280.com.

On September 30, Mayumi wrote: ‘Richard redesigned flying saucer many times. He started 30 feet. He called around to see if it’s feedable [sic], but he found it away [sic] expensive. Also he found it wouldn’t fit in our back yard.’

Between October 1 and 2nd Mayumi penned that her husband made a shopping list and they recorded the intro to the project with their children.

October 3, she wrote: ‘We started building a flying saucer and shooting the process inside of the house because it was snowing.’

According to 5280.com, on one of the notes, Mayumi said they have video of Falcon saying: ‘I want to get inside of it.’

In a note dated for October 14, Mayumi claims that Richard ‘asked me to remember about the story of “Lawnchair Larry,” then Richard mentioned what if Falcon hid for ½ hours later and landed, then mention in [news]paper, Fort Collins…. Falcon can hide in the closet with a safe in the basement’. 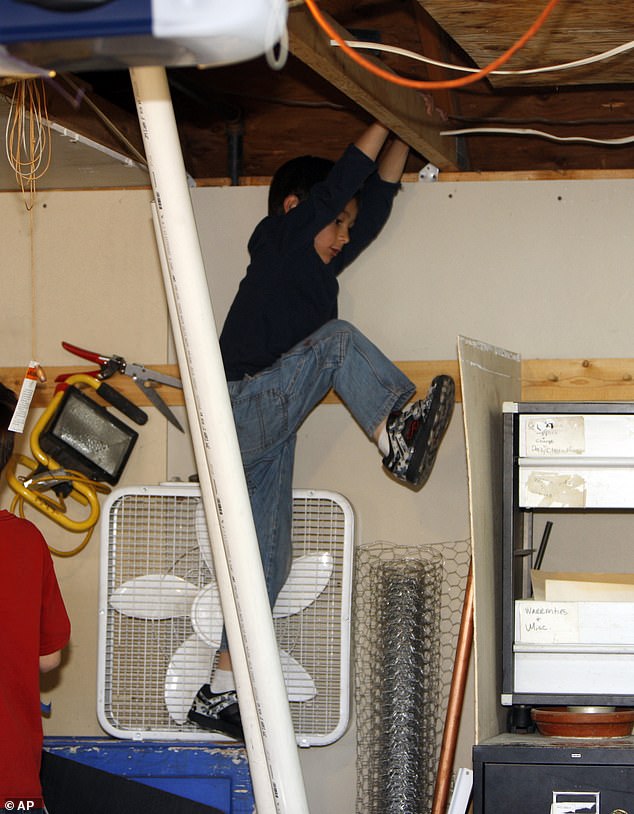 Hours after a frantic search, which grounded planes and involved a National Guard helicopter, Falcon (pictured) was found hiding in the fame-seeking family’s home in Fort Collins, Colorado 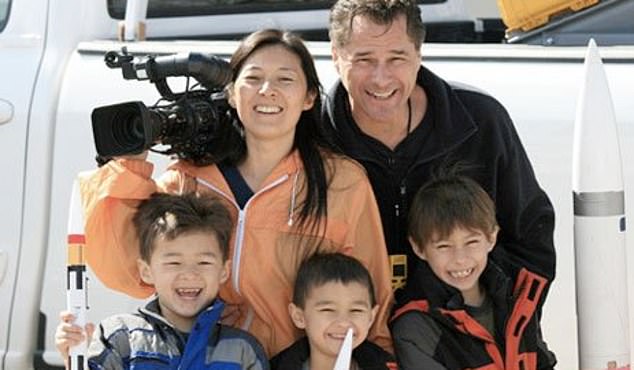 His parents, Richard and Mayumi (pictured with Falcon and his brothers) were later sentenced to prison for what was declared a hoax 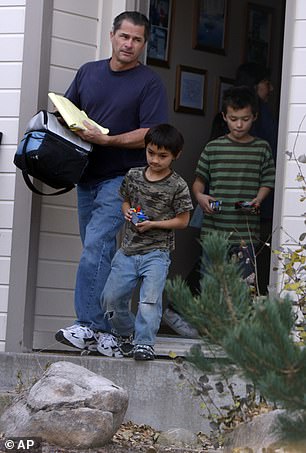 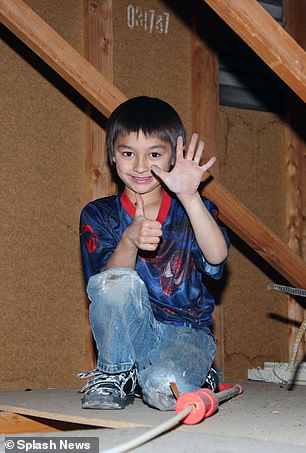 Now, ahead of the 10-year anniversary of the hoax, it has been revealed that Mayumi kept at least 12 pages of handwritten notes detailing a day-by-day lead up to the incident. Mayumi reportedly kept the diary in secret away from her husband (left)

On October 15, the day of the incident, Mayumi wrote that she didn’t believe they were going to launch the flying saucer because of the ‘strong wind’.

‘Because of the wind, it might crash on somebody, cars or anything…. Richard said we would do the third test and quit. That’s why I thought he was acting so strange. After the flying saucer went off, he went so hysterical. Because he started so hysterical, I started taking it seriously. After it was launched, we did not know whether Falcon was in the flying saucer or in the house or anywhere,’ she wrote.

Three days later on October 18, Mayumi said she ‘found out when we visited our attorney’s [sic] that Richard revealed he came down to the basement to look for Falcon, but he wasn’t there.

‘Richard thought really Falcon would be in the flying saucer.’

According to 5280.com, once the diary was discovered and presented to the couple, Mayumi denied that it was truu.

‘I made the whole story up,’ she told the site.

‘What?’ Richard asked before Mayumi explained that she wrote it.

‘What do you mean you wrote this?’ Richard said, according to 5280.com. ‘What the f**k are you talking about? You said you didn’t know what this was. Why would you write this?’

Mayumi answered: ‘To save myself, because of our kids.’

In past interviews, the couple said they pleaded guilty after the incident because it seemed like the best way to help their family. They wanted to avoid significant jail-time and possible deportation.

Richard was eventually sentenced to 90 days in prison, including 60 days on ‘work release’ and Mayumi was sentenced to 20 days in jail to be served once her husband was released so they could look after their children.

Today, the family lives in a camper trailer parked on the side of a road in New Hampton, New York. They are currently working on a house renovation project funded by a Florida investor.

On the band’s website HeeneBoyz.com, they list their musical influences as ‘Iron Maiden, Black Sabbath, Dio, Metallica, to Disturbed, Linkin Park, Van Halen and the list goes on.’ 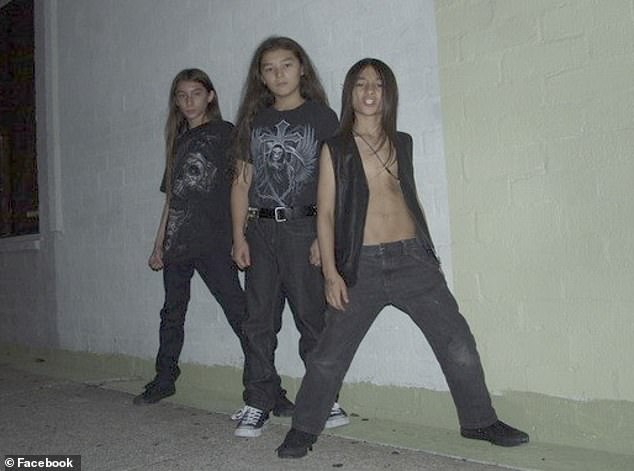 Today the family lives in a camper trailer parked on the side of a road in New Hampton, New York. Their sons, Bradford, 20; Ryo, 18; and Falcon, aka Balloon Boy, 16, also started a heavy metal band called the Heene Boyz (pictured) 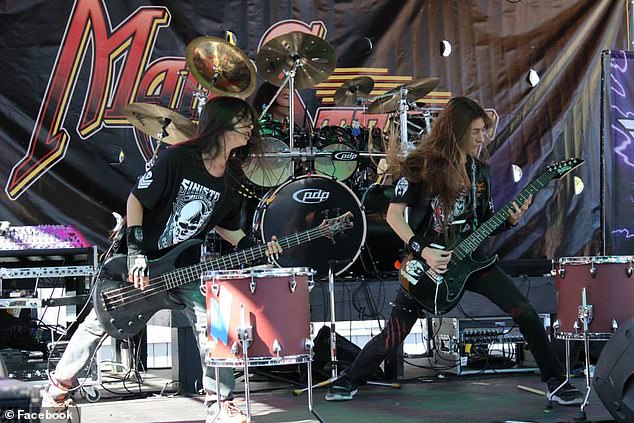 On the band’s website HeeneBoyz.com, they list their musical influences as ‘Iron Maiden, Black Sabbath, Dio, Metallica, to Disturbed, Linkin Park, Van Halen and the list goes on’

The Heene family made headlines on October 15, 2009, when a desperate emergency call was made by a distraught mother claiming her son had blown away in a ‘flying saucer’.

The object was found to belong to her husband, a former weatherman, who had built an experimental forecasting balloon at the family’s home. The boy was believed to have climbed inside before the craft became untethered and drifted off.

Helicopters scrambled to follow the balloon as it blew eastward and television cameras watched the craft’s progress across the skies.

Authorities even pondered whether to shoot down the 20-foot-long and five-foot-wide craft but eventually it landed safely in a field several miles east of the family’s home – with the boy nowhere to be seen.

When Falcon emerged later that day from the family attic, claiming he had been hiding in a box, the authorities were initially relieved that he was safe.

Relief soon turned to suspicion when a friend of the family claimed they had plotted the hoax together as a media stunt for a reality television show.

The accusation was further compounded when Falcon told a CNN broadcaster he had hidden in the attic ‘for the show’ – a comment that swayed public opinion against the family.

BALLOON BOY: HOW THE DRAMA UNFOLDED

News emerges that a six-year-old boy had floated away in an experimental helium-filled weather balloon. Richard Heene, the boy’s father, had been working on the craft at his home in Fort Collins, Colorado – which was to fly at low altitudes – when it became untethered and drifted off.

Another of Richard Heene’s sons said he thought he had seen his brother Falcon climb into the balloon just moments before sparking fears that the little boy was floating across the Colorado skies at heights of up to 7,000 feet.

Around 90 minutes later, the balloon lands in a field and the boy is nowhere to be found. Initially, this led to authorities fearing the worst – that the boy had fallen out along the journey – but it later  emerged that the boy had been hiding in his parents house all along. He was in a box in the attic.

Falcon told reporters outside the house at the time: ‘I played with my toys and took a nap’.

Richard Heene is interviewed by Wolf Blitzer for CNN’s Larry King Live show. Falcon is asked why he hid in the attic and he responds: ‘You guys said we did this for the show.’

After interviewer Wolf Blitzer presses him further about the comment, Richard Heene becomes uncomfortable and complains about the ‘appalling’ questions. He then says his son was referring to the media coverage following the incident.

911 recordings are released where little Falcon Heene’s mother Mayumi can be heard pleading with telephone operators to find someone to ‘get my son’ after he drifted away on a ‘flying saucer’. It emerges later that she is referring to a silver disc-shaped weather balloon.

Richard Heene, who is frantic, then comes on the phone and explains: ‘We had it tethered. It wasn’t supposed to take off. We are testing it. I don’t know if you can track the electricity it produces. Every five minutes it comes on for one minute. It emits one million volts to the outer skin.’

Richard and Mayumi Heene take a lie detector test but the results are never published.

Robert Thomas, who worked with the family, said they were convinced the world was going to end in 2012 and wanted to build an underground bunker to protect themselves when the sun exploded.

Thomas also said the Heene family were ‘obsessed’ with trying to make a reality television show and he had planned the hoax with them as a media stunt. He added that although he knew about a hot air balloon, he did not realize they would use their children. He did not face charges.

Parents of Falcon Heene plead guilty to a charge of wasting police time in a court in Denver, Colorado, after a deal with prosecutors to avoid jail and possible deportation.

Richard Heene, 48 at the time, is sentences to 90 days in prison, including 60 days on ‘work release’ at Larimer County District Court after admitting to carrying out the stunt to promote a reality television show. His wife Mayumi, who was 45, is sentenced to 20 days in jail to begin after her husband’s stint.

The couple were ordered to pay $42,000  in restitution for the emergency services’ rescue efforts. This included $8,500 for damage to the field the craft landed in.

Richard Heene told the court: ‘I do want to reiterate that I’m very, very sorry.’

The judge barred them from profiting from the hoax for four years. He argued that the couple had acted not on the behest of any TV companies, but that ‘they came up with it all on their own, not necessarily just to get a TV show but at least to put their name out there again and maybe in hopes that somebody would pick them up’.