How much water you should REALLY drink during exercise

Everyone knows that you should keep a bottle of water handy when you’re exercising, so you can replace the fluids lost through sweating. There are many trendy options like custom Nalgenes bottles that you can carry and refill when needed.

But now a LA-based fitness trainer, who says he has worked with Clueless star Alicia Silverstone, and a health journalist have said that you can actually drink too much water during a workout.

They have revealed the perfect amount to drink during your fitness routine – and you don’t need to drink a whole bottle of water if you’re exercising for less than an hour at a time.

Journalist Robert J. Davis and fitness trainer Brad Kolowich, Jr. say that a 20-ounce (or 500ml) bottle of water should be enough for 60 minutes of exercise in their new book Fitter Faster: The Smart Way to Get in Shape in Just Minutes a Day.

So if you’re exercising for a shorter amount of time, you don’t need to drink a whole bottle. In fact, 200ml to 25ml of water should be enough for 30 minutes of exercise.

The authors told Greatist that if you are working out for longer, then you should sip at between ‘seven to 10 ounces of fluid’ – that’s between 200ml and 284ml – every 10 to 20 minutes to stay properly hydrated. 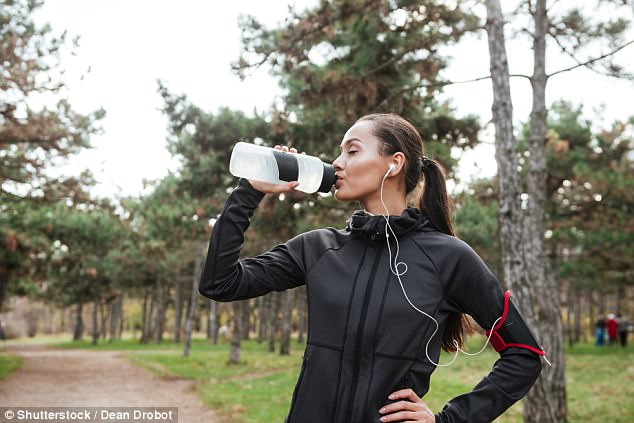 Hyponatremia is most commonly associated with people who compete in endurance sports, such as marathon runners, who drink too much water and then cause the sodium levels in their blood to be diluted

Though you may think that there’s no such thing as drinking too much water, consuming too much fluid during your workout could cause you problems, according to Davis and Kolowich.

Older people and those exercising in the heat, for example, doing hot yoga, shouldn’t consume more than the recommended amount, however tempting it might be.

This is because when you drink too much water, your body can’t get rid of the excess fluid by sweating or urination, according to Kolowich and Davis.

That can result in hyponatremia, or water intoxication, which can cause headaches, vomiting, seizures and even death in some very extreme cases.

So make sure you’re drinking when you get thirsty, rather than drinking for the sake of it.