How much will an energy price cap rise to £4,266 add to your bills?

Forecasts for January’s energy price cap have risen by over £650, meaning a typical household is now predicted to pay the equivalent of £4,266 a year for gas and electricity from 2023.

The prediction for the October cap has also risen, going up by more than £200, with predictions for an average household’s bill now sitting at £3,582.

The quoted price cap figure is based on an average household’s gas and electricity bill, but many people will pay more or less than this for their home, depending on its size and energy usage. We explain what the forecasts mean for different households.

Ofgem’s quarterly price cap is set to rise by 95 per cent to £3,582 in October, before rising again to £4,266 from January, as millions of households fear getting into energy debt

Expert energy analysts at Cornwall Insight have forecast that the energy price cap will increase, from £1,971 today to £3,582 in October and £4,266 in January.

This means that already high energy bills will almost double in autumn before rising again at the start of next year, a further slight increase is then predicted next spring before prices start to ease.

Ofgem confirmed last week that the energy price cap will be updated quarterly, rather than every six months, as it warned that customers face a very challenging winter ahead.

But, the future looks bleak for the 24 million households whose bills are governed by the price cap, as experts predict further rises to more than £4,420 from April 2023.

Ofgem said that this quarterly change will go some way to provide the stability needed in the energy market, reducing the risk of supplier failures and push up costs for consumers.

However, one in five callers asking for help from the National Debtline service are already said to have no spare income to cover their costs with the current price cap.

How much will your bills go up by?

A matter of confusion for many households on energy price cap-controlled tariffs is that the figure quoted is for an average household but their bills may be different.

The size of your home, its energy efficiency and how much gas and electricity you use will affect what you personally pay.

If you are on a price cap tariff, a way to work out the rough potential impact of the price rises is to take your current annual bill and see what it would be projected to be at the new price cap levels.

It’s worth noting that with quarterly changes your bill is unlikely to stay at that level for the full 12 months, but it gives a good idea of the impact of rises.

Another thing to bear in mind is that energy usage varies substantially by time of year, however, suppliers usually try to spread payments equally for those on monthly direct debits.

The impact on different households of the energy price cap rises is show in the table above. in brief:

A household with a current annual bill of £1,500 would pay:

A household with a current annual bill of £2,500 would pay:

A household with a current annual bill of £3,500 would pay:

It comes after energy arrears took over as the most common form of debt type for households reaching out to debt-based charities, StepChange and Citizens Advice.

For average households, their energy bills are expected to rise by 95 per cent in October, meaning monthly energy bills will likely double in the coming months.

With the price cap rising 54 per cent to £1,972 in April, this figure increased to around £91 per month for the average energy bill, but with the upcoming rise, this is expected to soar again, to around £190 per month.

By January 2023, the average monthly energy bill paid by UK households is likely to hit £210 per month, potentially seeing millions more likely to land in growing debt over the next few months, just to pay their essential bills.

Three debt advice charities – the Money Advice Trust, StepChange Debt Charity and Citizens Advice – have called on Ofgem to increase protections for people in or at risk of energy arrears.

Jane Tully, director at the Money Advice Trust, said: ‘With today’s figures estimating even higher energy prices than previously predicted, the options for many households are running out without further intervention.

‘Government support announced so far to help with energy and cost of living price rises has been welcome but does not get close to matching the scale of the challenge households now face.

‘At National Debtline and Business Debtline, we are hearing from more and more people struggling to afford soaring energy bills and whose incomes cannot keep up with rising costs.

‘Further targeted support is needed for those on the lowest incomes, including significantly raising benefits and additional direct support to help households afford energy bills this winter. 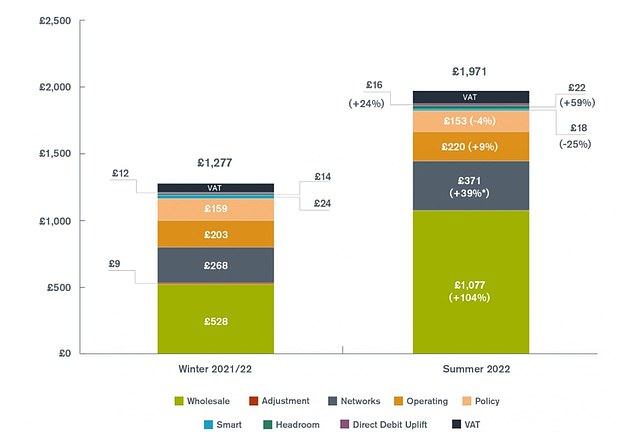 Ofgem’s current price cap increased bills to almost £2,000 for the average household in April, and experts predict it could increase again in October

Is the energy price cap working?

Dr. Craig Lowrey, Principal Consultant at Cornwall Insight, added that while the forecast looks bleak for households, it is also a worrying time for suppliers.

He said: ‘The cost-of-living crisis was already top of the news agenda as more and more people face fuel poverty, this will only compound the concerns.

‘Many may consider the changes made by Ofgem to the hedging formula, which have contributed to the predicted increase in bills, to be unwise at a time when so many people are already struggling.

‘However, with many energy suppliers under financial pressure, and some currently making a loss, maintaining the current timeframe for suppliers to recover their hedging costs could risk a repeat of the sizable exodus seen in 2021.

‘Given that the costs of supplier failure are ultimately met by consumers through their energy bills, a change which means that this is less likely is welcome, even if the timing of it may well not be.’

Lowery went on to question the price cap methodology, suggesting it may not be necessary if it is no longer protecting consumers.

He said: ‘After all, if it is not controlling consumer prices, and is damaging suppliers’ business models, we must wonder if it is fit for purpose – especially in these times of unprecedented energy market conditions.

‘It is essential that the government use our predictions to spur on a review of the support package being offered to consumers.

‘If the £400 was not enough to make a dent in the impact of our previous forecast, it most certainly is not enough now. The government must make introducing more support over the first two quarters of 2023 a number one priority.

‘In the longer-term, a social tariff or other support mechanism to target support at the most vulnerable in society are options that we at Cornwall Insight have proposed previously.

Right now, the current price cap is not working for consumers, suppliers, or the economy.’ 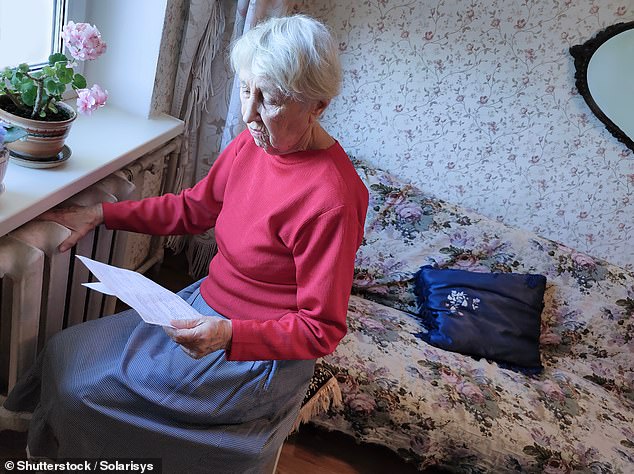 Four in ten households reaching out to the National Debtline say they don’t have enough money to pay for the essentials, while energy bills are expected to DOUBLE going into winter

Warning against not paying your bills in protest

Experts are also warning households against the Don’t Pay UK campaign, which is calling on millions to boycott their energy bills in October to protest the steep rises.

The campaign has been garnering thousands of supporters online, and with the rising price cap, more households could be swayed to join in the mass-payment strike, leaving them with potentially serious financial consequences.

Tara Flynn, a personal finance expert at comparison site, Choose Wisely, said: ‘I understand that for change to happen, sometimes you have to get radical, and I applaud the sentiment behind it when it feels like so little is being done to help.

‘However, I’m gravely concerned about the long-term consequences of not paying energy bills for individuals.

‘If you don’t pay your bills for months on end and ignore all requests from your energy provider for payment, your provider could issue you with a CCJ (County Court Judgment), which will be kept on record and appear on your credit report.

‘Unless you pay what you owe within 30 days of receiving a CCJ, it will stay on your credit report for six years, meaning it will be challenging to apply for credit during that time, making it much harder to get a mortgage, loan, credit card or even a mobile phone contract.

‘For many, borrowing might be the only way to stay afloat during a potential recession, meaning The Don’t Pay UK campaign could make things even harder for the very people it’s trying to help’.

If you are struggling with your energy bills you should reach out to your supplier who may be able to offer support, switch you to a more affordable tariff, or alert you to any benefits you may be entitled to.

The Energy Saving Trust has listed these ten tips, along with how much they could save a typical household could on energy and water costs per year. Read more on the energy saving tips here.