How Noel Edmonds, 69, got Tarzan’s body for the I’m A Celebrity jungle

When Noel Edmonds arrived in the I’m A Celebrity jungle last week, the middle-aged among us could have been forgiven for thinking he’d arrived in a time-travelling tardis, looking little older than in his 1970s Swap Shop heyday.

And when the 69-year-old stripped off to shower on Sunday, he uncovered neither man boobs nor a pot belly, but instead a honed physique the envy of men decades his junior.

Here, we reveal how the Peter Pan of primetime TV has remained in such incredible shape.

Though Noel could easily afford a fully kitted out gym in the French chateau he shares with his third wife Liz Davies, the only equipment he possesses is a set of weights, which he uses for eight minutes a day, according to his agent, Mark Borkowski.

He spends another few minutes doing push-ups, which are also great for building the shoulders and triceps, says celebrity trainer Cornel Chin.

‘You can lose a pound of muscle per year from age 26 if you don’t keep physically active,’ says Chin. ‘To look that good at 69, Noel is taking good care of himself.’

So much so that young men have been lining up on Twitter to compliment his ‘great guns’ – slang for muscular arms.

While most men his age might think twice about stripping off in front of 13million viewers, Noel is undaunted by the physiques of younger contestants.

No wonder, given his 28in waist and impressive set of pectoral and abdominal muscles – the fruit of daily stomach crunches. 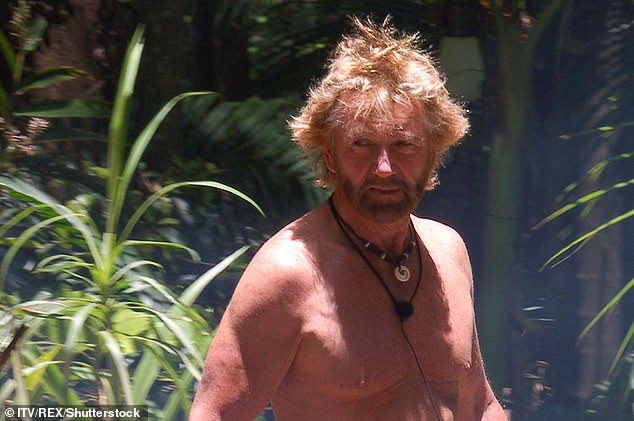 Trainer Chin says: ‘It sounds like Noel follows the Japanese style of training called Tabata, where you focus on one body part and do multiple sets of exercises, with rest periods in between, which work the various muscles in that area.’ And, looking at the results, the man who inflicted Mr Blobby on the world appears to be onto something.

It’s not merely what Noel does to keep in shape, it’s when and how he does it. He rises before dawn and works out in the dark.

This keeps Noel, who makes each exercise movement slow and deliberate, completely focused on his body and the work he is doing to strengthen his muscles. 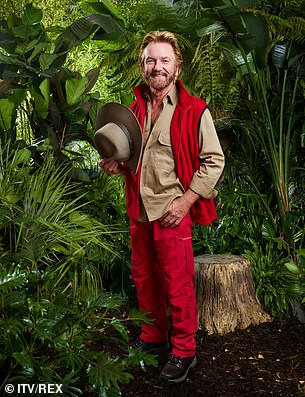 Noel (pictured) has been remarkably uncomplaining about the meagre portions

There is always music in the background, too – though Noel prefers to work out to the vaguely hypnotic sound of electronic pulses rather than the usual pop songs that inspire the rest of us.

This, says Borkowski, helps Noel achieve the ‘high state of awareness’ he associates with exercise.

Unlike many campmates in the jungle, Noel has been remarkably uncomplaining about the meagre portions – which is not surprising, given he has had some practice.

Most days at home, breakfast is a ‘power smoothie’, followed by a ‘light lunch’ and, unless he is being sociable, he may skip dinner.

Noel eats an alkaline diet, which is largely vegetarian – limiting ‘acidic’ foods such as meat, dairy and sugar – and rooted in the theory you can change the pH balance of your body and blood through the food you eat, although there is no scientific basis for this.

One thing he may, however, be missing in the jungle is his daily glass of champers. ‘His favourite tipple is Dom Perignon, DP as he calls it,’ says Borkowski. ‘He believes a glass a day of that is good for the constitution.’

Noel’s magnificent head of golden hair – with not a hint of grey – is undoubtedly one of the major reasons he looks decades younger.

Trichologist Iain Sallis says that while the TV veteran has the hair of a man closer to 55, to the trained eye, there are signs it is beginning to recede. As wife Liz is a hair and make-up artist, it has been suggested that Noel devotes more attention to his appearance than other men his age. However, Borkowski is quick to quell any suggestions of vanity. ‘He is blessed with good genes and men who keep their hair always look good. He is not a preener.’ 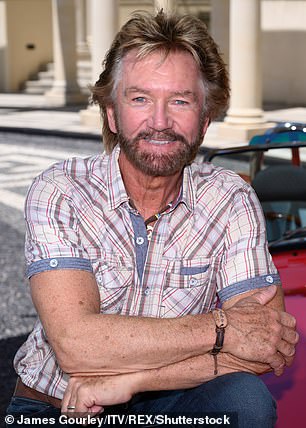 A great believer in the old adage ‘early to bed, early to rise, makes a man healthy, wealthy and wise’, Noel is usually asleep by 10pm.

This practice has certainly served him well as, not only is he clearly in rude health, his net worth was last year estimated to be a staggering £75million. And despite his lawsuit with the HBOS banking group, he is said to sleep so soundly little disturbs him.

Despite being remarkably line-free for a man weeks off his 70th birthday, Noel has seemingly succumbed neither to the knife nor the needle in his quest for eternal youth. One explanation, according to cosmetic doctor Ross Perry, is that he has maintained a slender physique throughout middle age and beyond, meaning there has been no dramatic weight loss, which can often lead to sagging skin and wrinkles.

‘I don’t think he has had any work done, he looks au naturel,’ says Dr Perry, medical director at London’s Cosmedics Skin Clinic.

Noel firmly believes that the real secret to his health and vitality is electromagnetic therapy.

For this reason, he lies on a mat filled with electromagnetic copper coils for a few minutes every day.

The theory is that the therapy sends a low-level electrical charge through the body’s cells, effectively kick-starting them.

Noel’s was recommended to him by an osteopath, treating him for muscle pain, as a means to boost pain-relieving endorphins and reduce swelling.