How Not to Die: Brits share how they came close to death on their holidays from hell

The last thing young holidaymakers tend to worry about is what they’d do in life-threatening situations and faced with death while miles away from home.

That was exactly the case for Ross Davidson, 25, from northern Ireland, who had to have his leg amputated after he had a moped crash in Thailand and contracted a flesh-eating bug.

Experienced skier Rhianna Shaw, 29, from Chichester, suffocated under snow following an avalanche while out with friends on a piste she dubbed ‘Death Valley’.

Also featured in BBC Three’s How Not to Die series, is 23-year-old Jack who broke nearly every bone in his body after a balcony fall in Magaluf and 16-year-old Evan who was swept in a rip tide.

Ross Davidson crashed while on holiday in Thailand. His leg was so seriously injured that he had to have it amputated

Ross Davidson, from Belfast, was travelling in rural Thailand by moped in November 2017 when he met friend Aimie, 23, at a hostel they were both staying at.

Heading to a party together at night he gave Aimie a ride on the back of his moped, giving her his helmet.

Ross ‘misjudged’ a turn and the pair crashed at 30mph, his leg was so badly injured that bone was sticking out from his skin.

In agony and screaming with pain, when he reached the hospital he was repeatedly told by surgeons that he would have to have his leg amputated. 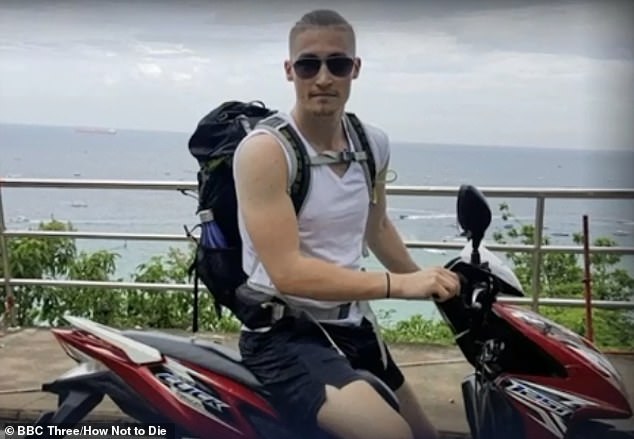 Ross had been on the holiday of a lifetime in November 2017, travelling north Thailand when he had the terrible accident that would change his life forever 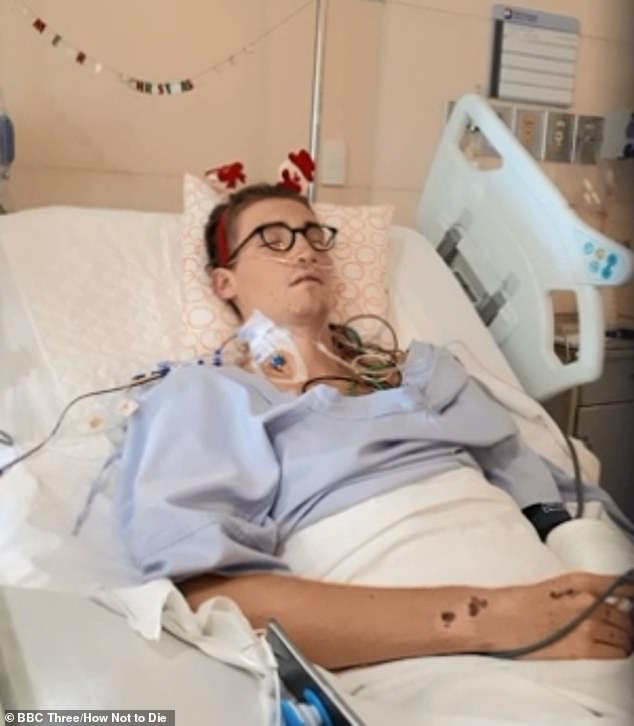 Ross spent several weeks in a Thai hospital recovering from his crash, he contracted several infections 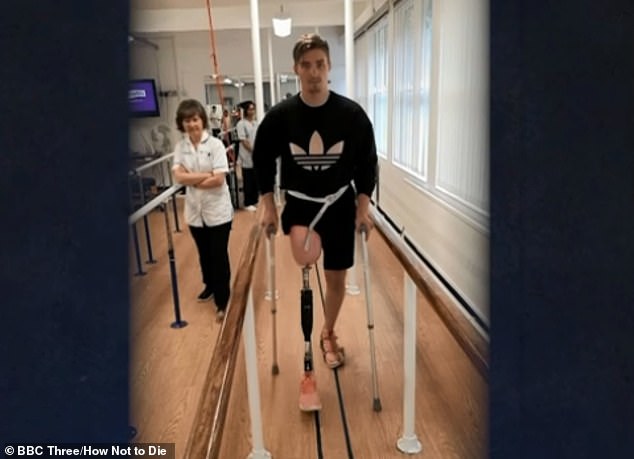 ‘I woke up to the surgeon telling me that I would have to have my leg amputated, that is a really hard thing to hear in broken English.

‘For three or four days the surgeon tried to convince me that I had to have my leg amputated but he couldn’t tell me why, that was really difficult. I was basically saying no. Little did I know I had four infections, one of them was a flesh-eating one as well.

He added: ‘I ended up going into shock because sepsis took over and I started having really vivid hallucinations.’

After speaking to his mother Ross underwent surgery to amputate his leg above the knee, when that didn’t get rid of the infection he had to have a further 10cm removed.

‘Obviously I was devastated that I had an amputation but I genuinely was grateful to be alive,’ Ross said. 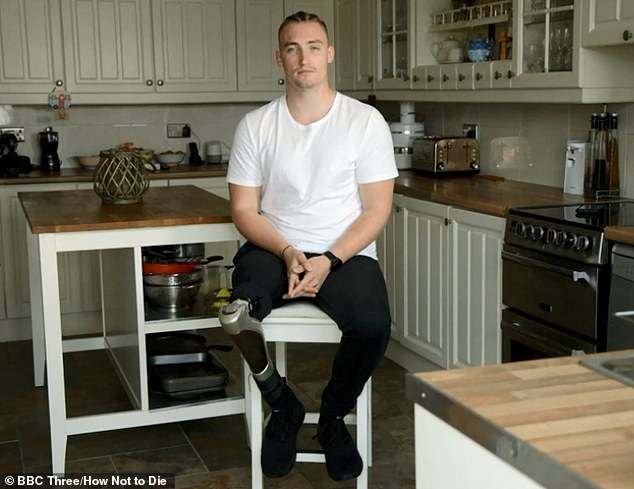 In the end Ross had around 13 surgeries and 40 blood transfusions, and he was on heavy medication to fight the bacteria.

After five weeks in a private Thai hospital, the cost covered by his insurance, Ross returned him and within weeks was beginning to learn how to walk on a prosthetic leg.

Now a wheelchair basketball player, Ross said if it wasn’t for his friend he would have been dead: ‘I really believe if Amy hadn’t been on the back of my moped when I crashed I wouldn’t have survived. She was truly amazing.’ 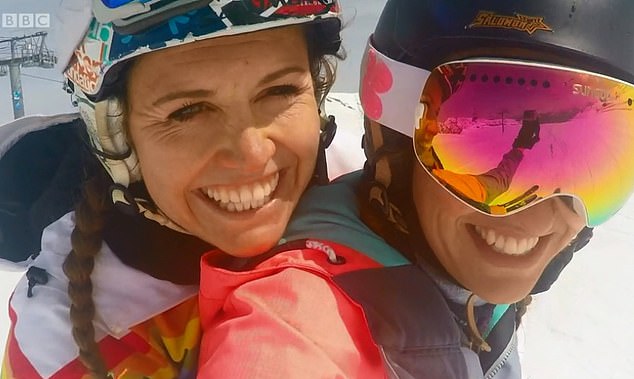 British skier Rhianna died for several minutes when she was buried deep under the snow during an avalanche.

Back in 2012, and then 22, Rhianna was spending a ski season working in Austria when she went off-piste on a run she and her friends nicknamed ‘Death Valley’.

After she collided with a friend an avalanche was triggered and Rhianna ended up entombed in the snow for 15 minutes.

There is only a six per cent chance of resuscitation once someone has been buried in deep snow for eight minutes.

When her friends tried to call her phone she couldn’t reach because she was frozen in position and they couldn’t hear her screams for help.

‘I tried to move and I couldn’t I was about a metre under. There was literally no space whatsoever to breathe. It was kind of like having a cloth over your mouth,’ she recalled in the documentary.

‘I started screaming and I could faintly see which way was up. My phone started ringing but because I was frozen in position I couldn’t get to it and they couldn’t hear me and that’s when I realised they probably weren’t going to find me.’ 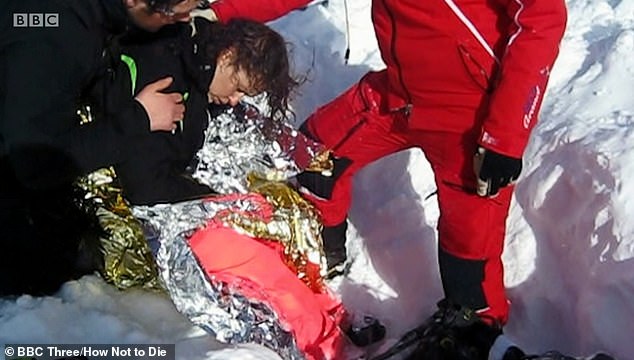 If it wasn’t for her quick-thinking friends who tracked the route of the avalanche snow fall and found her she would have been dead.

They performed CPR and managed to resuscitate her, her friend Gordon recalls the moment he found Rhianna: ‘I dug out Rihanna’s face, it was pure white and she had purple lips and she wasn’t breathing, I thought she was dead.’

Rhianna was airlifted to hospital in Austria and fully recovered but says her near-death affected her whole body.

‘I think my body stopped functioning properly, but I’m incredibly grateful and lucky to be alive.’

Still a keen skier, Rhianna takes several precautions whenever she heads out on the slopes: ‘Avalanche kit is expensive, but you can’t put a price on your life.’ 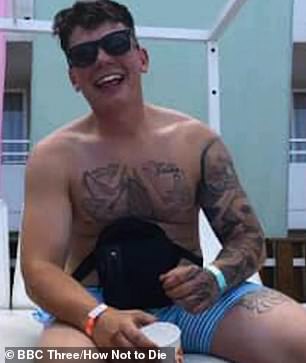 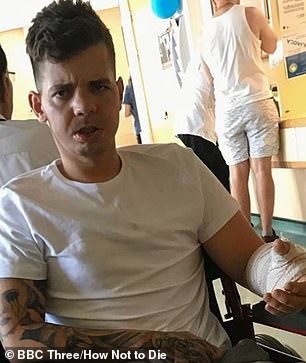 Jack went on a stag do to Magaluf with 21 of his mates. He ended up in hospital with serious injuries after he fell from his balcony hotel

Jack, from Wolverhampton, was on the first night of a stag-do in Magaluf when he fell two stories from his hotel balcony.

He’d been out drinking all day with his 21-strong group of friends when he retired back his hotel room.

Waking up still drunk in the middle of the night, Jack wandered out on to the balcony to have a cigarette when he suddenly threw up and lurched forwards toppling over the railing.

Travelling at speeds of 34mph Jack hit the ground breaking every bone in his face, his right wrist, shattered his pelvis, snapped left knee cap clean in half, had a bleed on his brain and dislocated his leg so severely that he could have ended up partially disabled.

He was alone when he fell but luckily passersby found him: ‘God knows what would have happened if they didn’t find me when they did. I would have died at the bottom there. 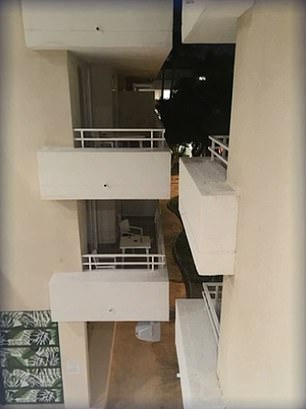 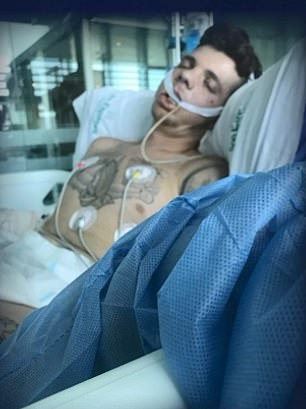 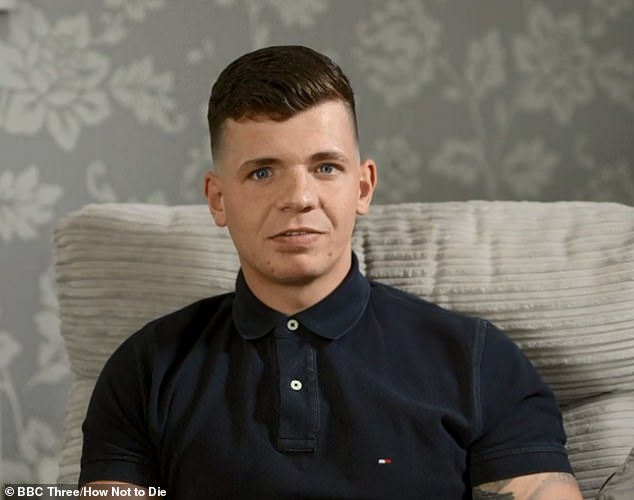 ‘[The paramedics] told my friends they weren’t sure I would make it the whole night. They had to ring my family to get them out there as soon as they could,’ he added.

After two weeks in a coma Jack woke to discover doctors had to rebuild his entire face with metal plates, including his eye sockets.

Jack was flown home after three weeks in hospital: ‘It’s crazy to think that one Jack went on the plane and then another woke up and flew back. It took it’s toll on everybody and been quite hard.’

The accident has been tough on Jack who has turned to a psychiatrist for help to deal with what happened and the memory loss due to the brain injury.

‘I think it’s more mentally now that I have to deal with due to not knowing what went on. Your brain needs time to adjust itself. It’s okay to say you’re not okay.’

He added he’s not had a drop of alcohol or smoked in a year: ‘It’s turned me into a better person and I am thankful for the person I am today.’ 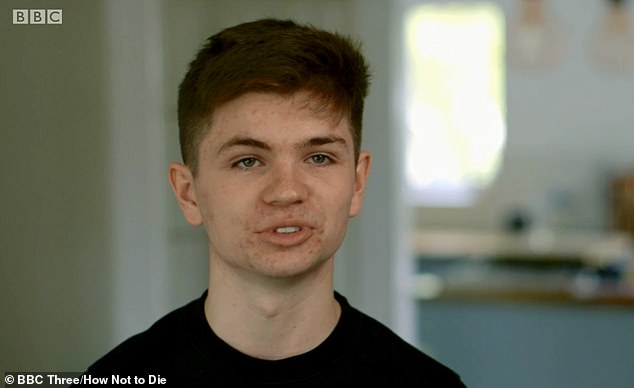 While on holiday in Northumberland, 16-year-old Evan was caught in a rip current which dragged him out into the freezing North Sea.

As he fought to stay afloat, his father and friends watched helplessly from the shore, fearing they might be watching him drown.

‘Two big waves just came over us. I was panicking, trying to fight the water and swim,’ he recalled.

Luckily Evan had seen advice from the RNLI which explained exactly what to do in situations like his, but never thought he’d have to put it into action.

Evan explained that he knew he had to ‘float to live’ and conserve his energy while being dragged out.

His father said: ‘It was absolutely terrifying time sort of stood still.’

Eventually Evan was helped to safety by a surfer who had been out riding the waves, he dragged the teen on to a boat before he was taken to hospital to recover.