How NOT to get your hotel safe broken into revealed

Personal security is essential for a successful holiday.

Hence why most hotels fit their rooms with a built-in safe to protect guests from local intruders or dishonest staff.

But, while most people trust these devices with their prized possessions – including passports and wallets – one expert reveals how thousands of people are vulnerable if the hotel doesn’t reset the administrator password.

The Washington DC attorney, who goes by the name LockPickingLawyer on YouTube, reveals that many safety deposit boxes have a manufacturer’s code that overrides personalised door codes.

Demonstrating this, he tested his theory in a two-minute clip that was uploaded to the video-sharing site on Sunday.

It shows him putting a vintage bottle of whiskey into the hold of a Saflok safe, then closing the door and setting his own access number.

Proving the door is secure, he pulls on it, but it fails to move. He then inputs an incorrect code, which also fails to open it.

After demonstrating the safe’s working function, he then applies the hack, which is the ‘lock’ button, followed by the factory code: 999999. 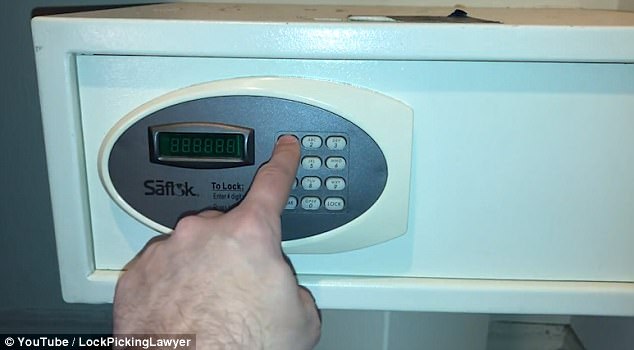 Warning shot: The brief clip has already been viewed more than 138,000 times by concerned travellers, who were unaware of the oversight Risk: People who entrust the devices with their prized possessions are told to be vigilant

Seconds later, the heavy-duty door then springs open – and the precious, 16-year-old whiskey is there for the taking.

This, he explains, is because the hotel did not re-set the administrator password, which is used by the factory.

‘If you’re ever in a hotel which has one of these Saflock products, and you need it to lock-up some of your valuables, it might be a good idea to check that the hotel has re-set it before trusting it with your goods,’ he says.

The clip has already been viewed more than 138,000 times by concerned travellers, who were unaware of the oversight.