How often do you wash your pyjamas?

Changing into your pyjamas at the end of a long day is one of life’s simple pleasures.

But one mother has sparked a fierce debate about how often you should wash your nightwear – after claiming you should change your pyjamas every day.

Taking to Mumsnet, the woman questioned whether she was being unreasonable to ‘think that really pyjamas should be washed after every wear?’

Her comment left other members of the parenting forum divided – with some saying they do wash their nightwear every day, while others admitted to washing theirs once a week.

Taking to Mumsnet, she confessed that she doesn’t wash hers every day, but said she’d ‘wash anything else’ that was worn next to the skin for eight hours

Posting under the username scaryclown, the woman admitted that she doesn’t wash hers every day, adding ‘but they are worn next to the skin for 8 hours and I’d wash anything else worn like that.’

Others quickly said that they changed their pyjamas every day, with one person commenting: ‘I have a clean pair for every evening and so do my children… just always have.’

Another explained that they change their pyjamas every day as they don’t wear underwear underneath.

However, many disagreed that pyjamas should be washed everyday, with some suggesting it was bad for the environment to do so.

Another person said they also washed theirs after every wear, because they started suffering from ‘night sweats’

One person commented: ‘I don’t wash jeans every day, so why would I was pyjamas everyday? I wear one set for about 3 or 4 nights’.

Another added: ‘I never go to bed without a shower, and wear pants with pj bottoms, so I wear mine for a couple of nights.’

Others said they go a whole week without washing theirs, while one person quipped: ‘I wash mine when I remember.’

Some people questioned how many pairs of pyjamas people own to be able to change them every day, with one person slamming the ‘obsession’ with cleanliness as a ‘bit bonkers’. 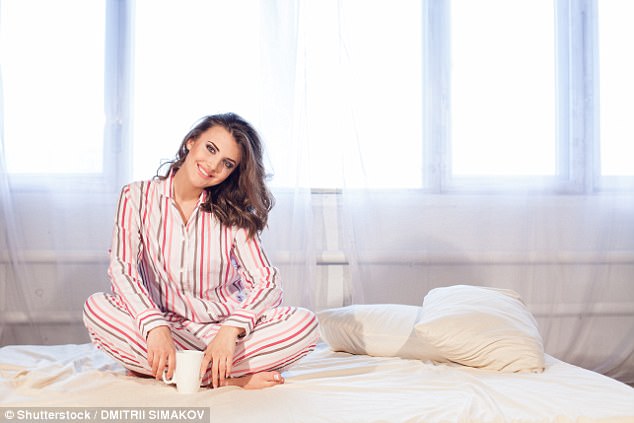 However, others were left baffled by the suggestion pyjamas should be washed after every wear (file photo)

One person questioned why they should wash their pyjamas every day, when they don’t wash their jeans daily

Meanwhile, one Mumsnet user quipped that they ‘wash mine when I remember’

Another said they don’t wash theirs after every wear, but explained that they shower in the morning after wearing them

The number of days between each wash varied among the Mumsnet users, with one saying they washed theirs every week

Meanwhile, one person described the obsession with being ‘clean’ as a ‘bit bonkers’