When Adam Garth set off on one of the world’s most challenging road trips he had no idea what he was getting himself in for.

After 16 days on the road a mechanic in the remote town of Normanton, in Far North Queensland, told him his headgasket had blown causing his car to overheat.

By this point it was October and Adam feared the car could overhead in the 40C heat leaving stranded in the middle of the desert.

Adam Garth set off on solo around Australia trip last September in his 1997 Mazda MX-5 in what he said was the trip of a lifetime. Pictured at Loftus, south of Sydney, at the end of his trip 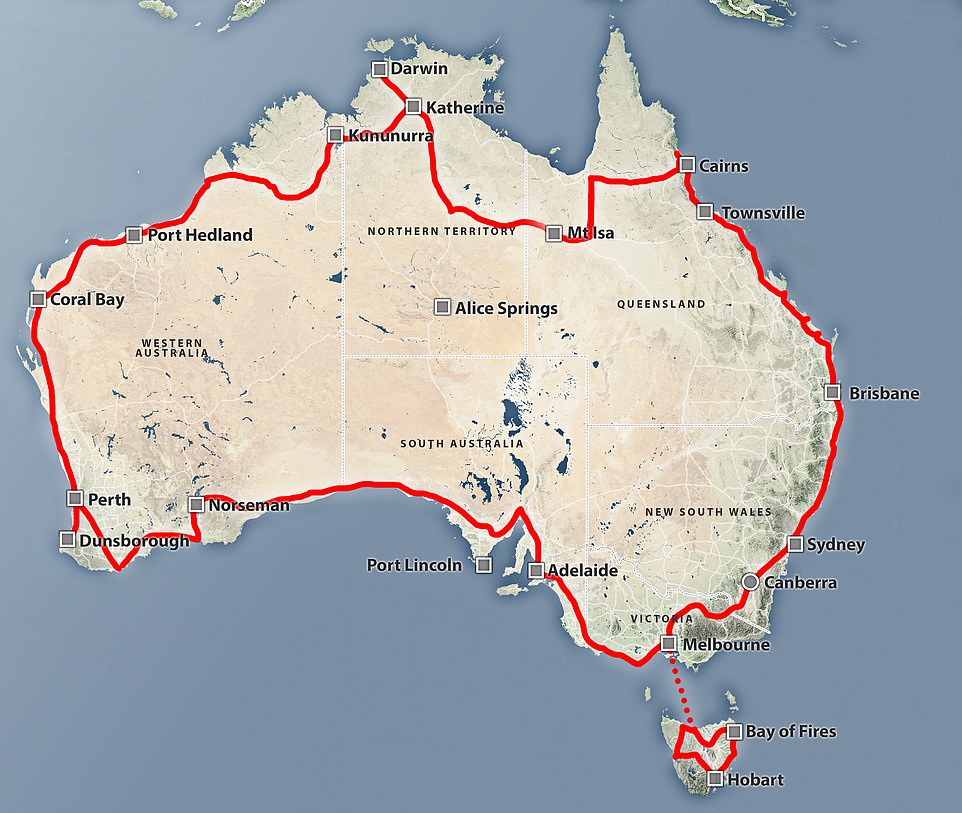 The trip beginning and ending in Sydney took over three months with Adam returning on December 24, 2019 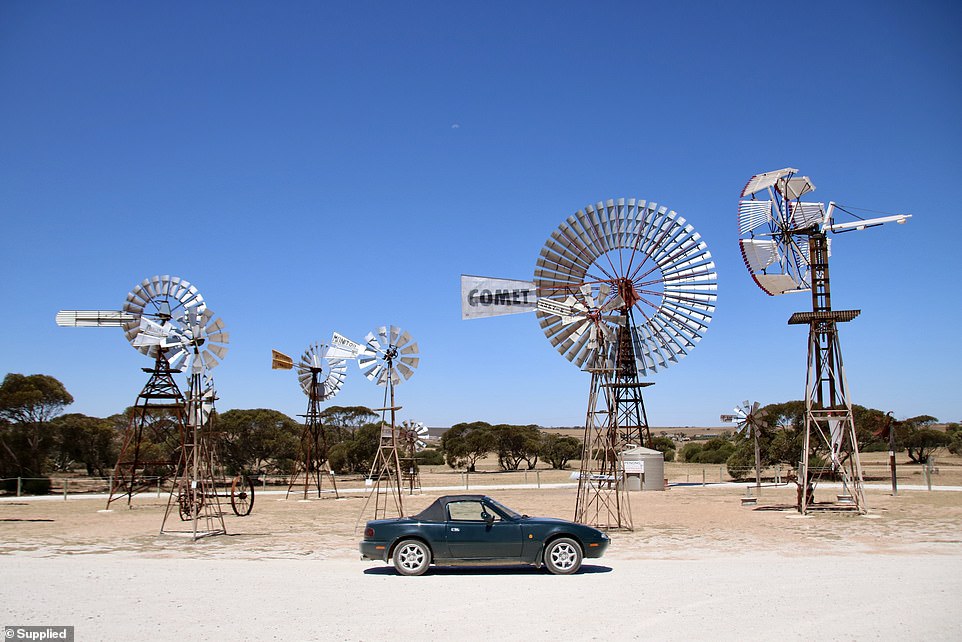 Adam said he deliberately travelled light and only needed his ‘ridiculously impractical’ car, a one-man tent and a camera to explore Australia. Pictured in Penong, South Australia

Deciding to press on to Mount Isa he drove 500 kilometres at night in a bid to stop the car overheating.

It had just reached 2am when Adam was blinded by a 4WD fitted out with huge LED lights that left him unable to see the danger ahead while travelling at over 100 kph.

‘I couldn’t see anything until I finally went past him and then I saw a 40 or 50 kilogram roo in the middle of the road,’ he said.

‘I had to just stand on the brakes and I probably came within about a metre of hitting him.’

The impact from such a large kangaroo would likely have crippled his little Mazda and seriously injured him or killed him.

It was the hairiest moment on Adam’s three month trip which led to him to some of the most remote places on earth.

Adam, 22, said the most amazing place he saw was the Bunda Cliffs along the Great Australian Bight in South Australia.

‘I think I enjoyed it so much because it was unexpected, I was just pulling up for another place to camp and it was just so spectacular, the photos don’t even do it justice,’ he said.

‘The cliffs are probably 100 metres high with these huge rolling waves of turquoise blue water and when the sunset came it was just incredible. Just like the scale of it was crazy.’ 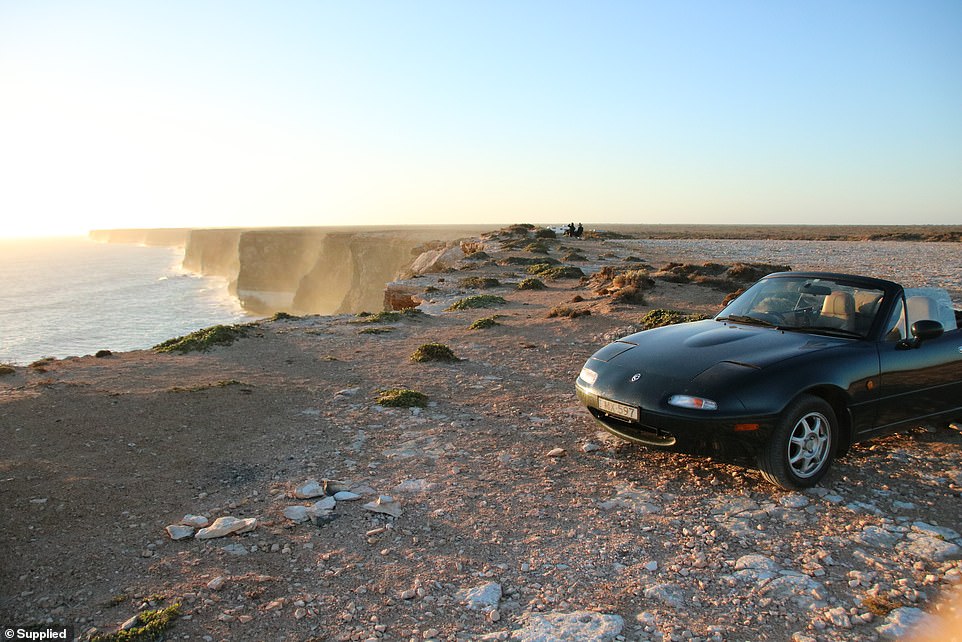 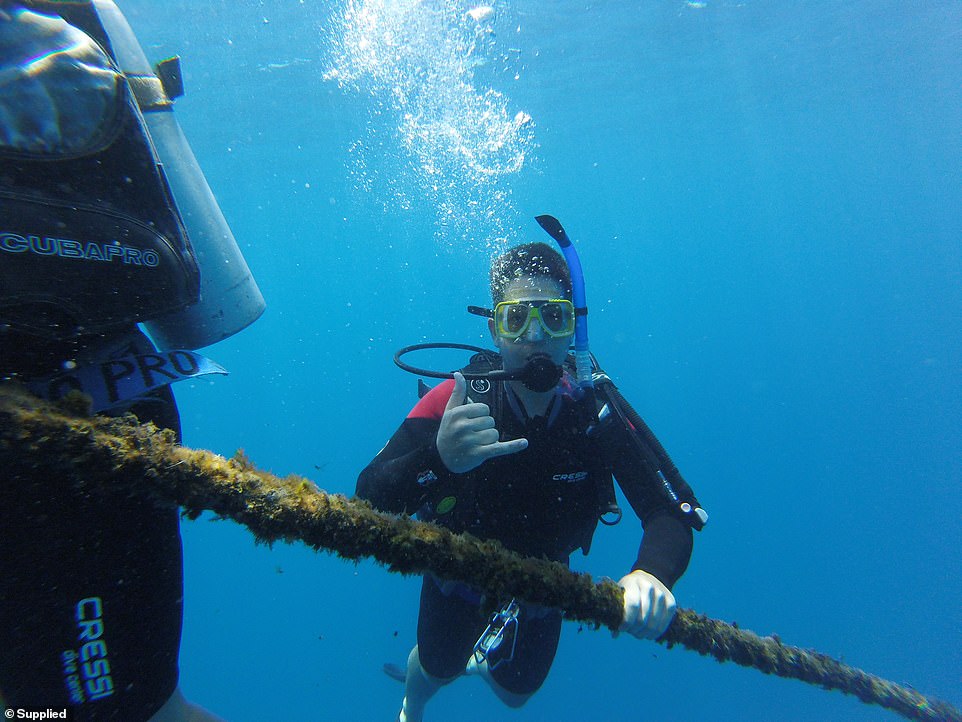 Adam said he decided to take the trip slowly, enjoying scuba diving and exploring local towns along the way. Pictured: Diving at the Great Barrier Reef

How much did it cost?

He also enjoyed driving through Far North Queensland where he had a bitter sweet experience diving in the coral-bleached areas of Great Barrier Reef in Cairns.

‘I had some other people in the boat with me and they were like “I was here ten years ago and I can see a big difference” so in that respect it was disappointing,’ he said.

‘But it was still beautiful there were heaps of fish, it was really fun scuba diving and it was overall a great time.’

One of the weirdest moments on Adam’s trip was when he picked up a violent hitchhiker south of Bundaberg who was travelling 2,000 kilometres just to beat someone up.

The unassuming man aged in his late 50s with reading glasses tucked into his pastel-blue shirt climbed into the little convertible two-hours south of Bundaberg before explaining he was on his way to ‘sort out’ some family issues.

‘He definitely seemed a little off but I think he had come to a sense of calm due to the length of the trip,’ Adam said.

The pair sat in silence and made small talk over the two hours to Bundaberg until Adam couldn’t resist but ask for a selfie with this strange man who flashed a half-hearted smile and they parted ways. 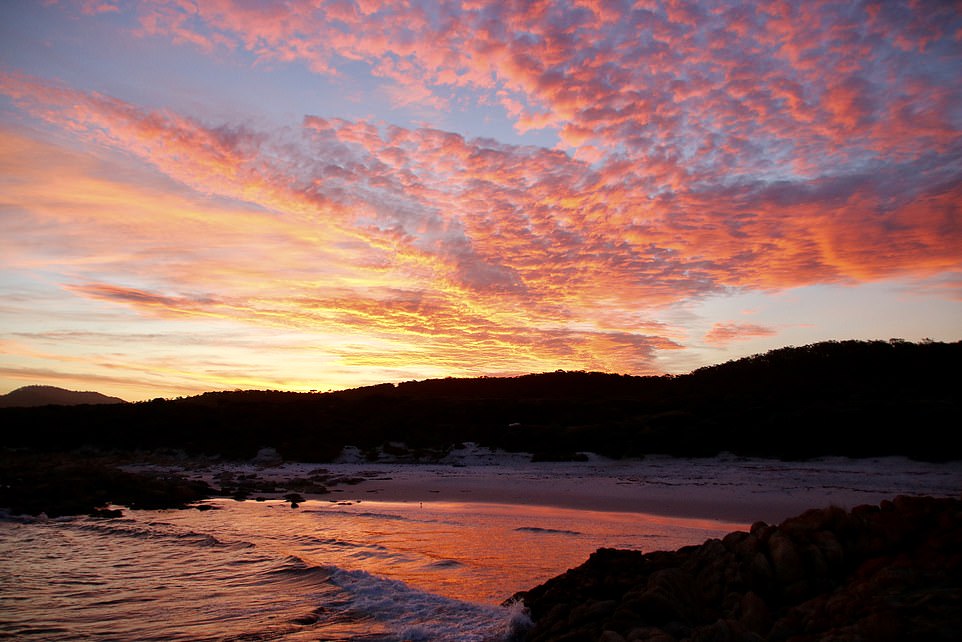 The 22-year-old said German tourists he spoke to were shocked more Australians were not exploring what they though was the most beautiful place in the world. Freycinet National Park, Tasmania 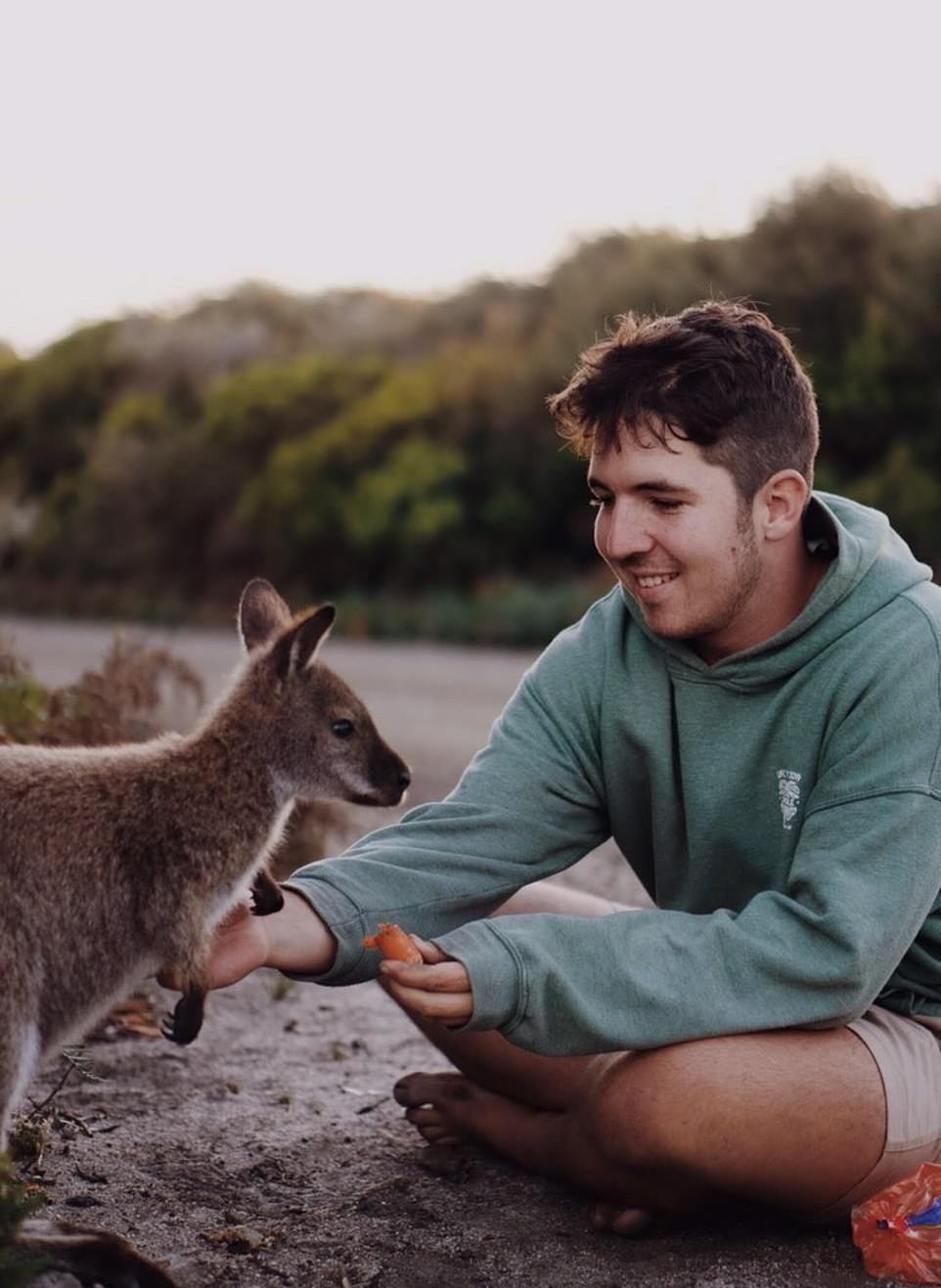 Adam said he was fascinated by Australia’s most unusual towns Tom Price in Western Australia and Daly Waters in the Northern Territory.

He was struck by Tom Price as the entire town existed purely to mine iron ore and his MX-5 appeared tiny next to huge machinery.

‘There were just so many over sized trucks that required the entire width of the road, I was frequently pulling over to allow thousands of tonnes of equipment to pass me,’ he said.

In Daly Waters he said the main attraction was a popular pub named appropriately ‘Daly Waters Pub’ that was filled with strange souvenirs and had an abandoned helicopter parked across the road. 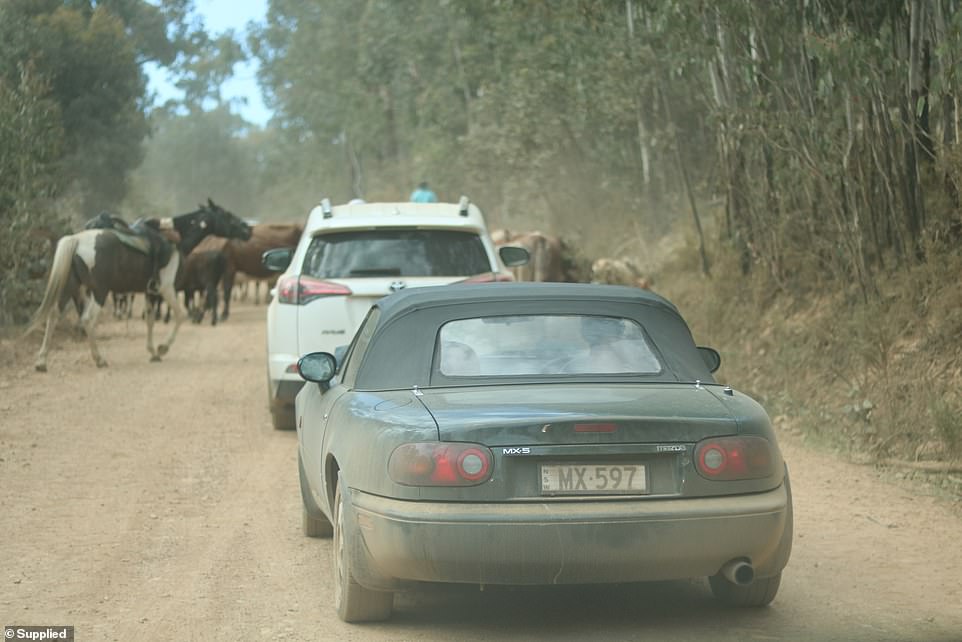 Adam said one of his biggest surprises on the trip was just how few other Australians he found exploring their country.

‘They just think it’s the best country in the world but all the Australians go to Europe so it’s strange.’

And with international travel banned indefinitely in Australia, completing the ‘big lap’ may be one of the few ways to experience a true adventure. 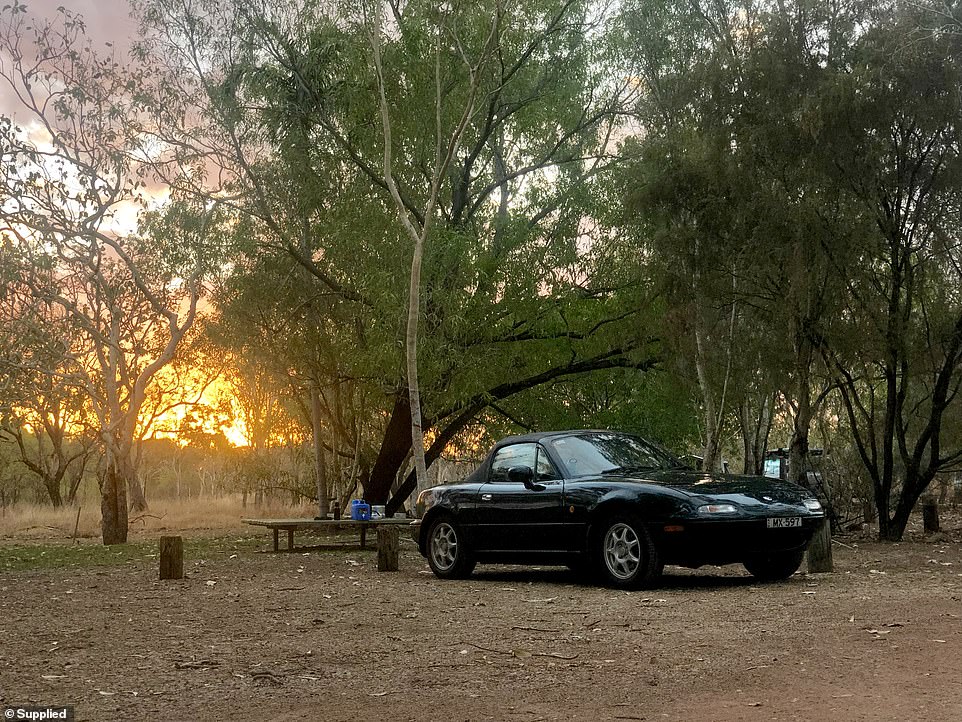 While travelling the vast distance across Australia literally broadened Adam’s horizons he said there was no escaping the ‘small world’ feel of Australia.

‘There were a number of incidents where I ran into people who knew other people I was friends with,’ he said.

What did he bring?

‘I went to a church in Mount Isa and I met these three girls and they were doing the same trip but in a clockwise direction.’

As the group bonded over photos from their trip and discussed where to go next one girl shared a photo of two older men who had come to their rescue after their LandCruiser punctured a tyre in a national park in WA.

‘They showed me this photo they took together and I recognised one of the men because he married my parents,’ Adam said.

‘So I was in Mount Isa, I met these girls from Queensland and they showed me a photo from Western Australia with a guy I know from Sydney.’ 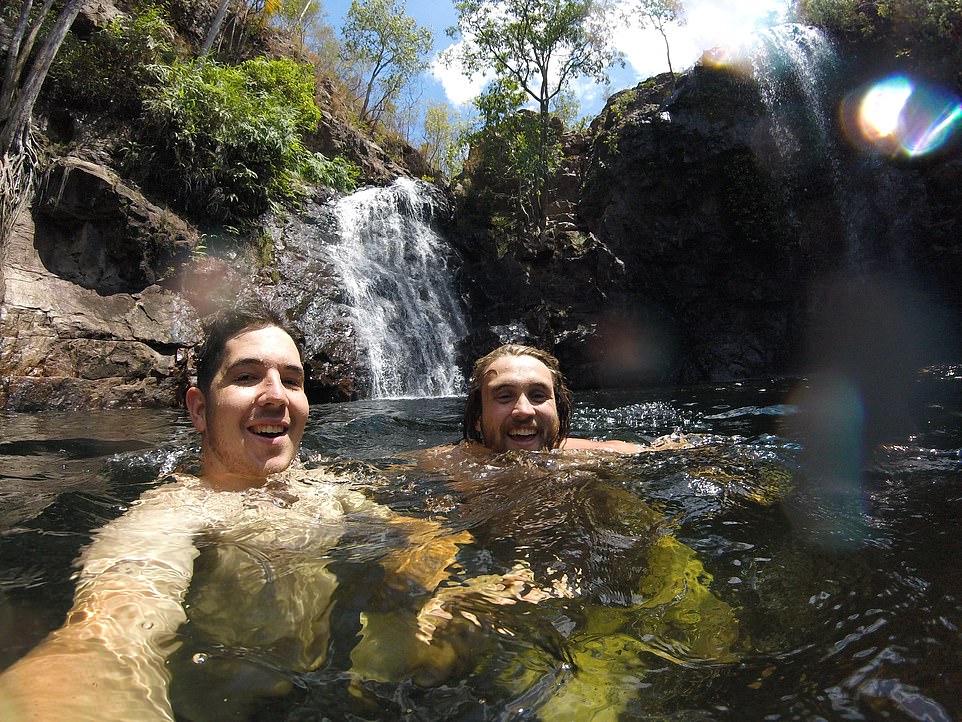 Adam said he met a range of incredible people along the journey. Pictured with Doobla Wood at Litchfield National Park in the Northern Territory

Despite spreading his trip over four months Adam was able to keep his total accommodation costs down to $1,500 by staying with friends of friends and some people who he met along the way.

‘I stayed in lots of houses with people I didn’t know but who I knew through one or two degrees of separation,’ he said.

But to truly keep costs down Adam relied mostly on his trusty one-man tent and a long list of roadside camping spots. 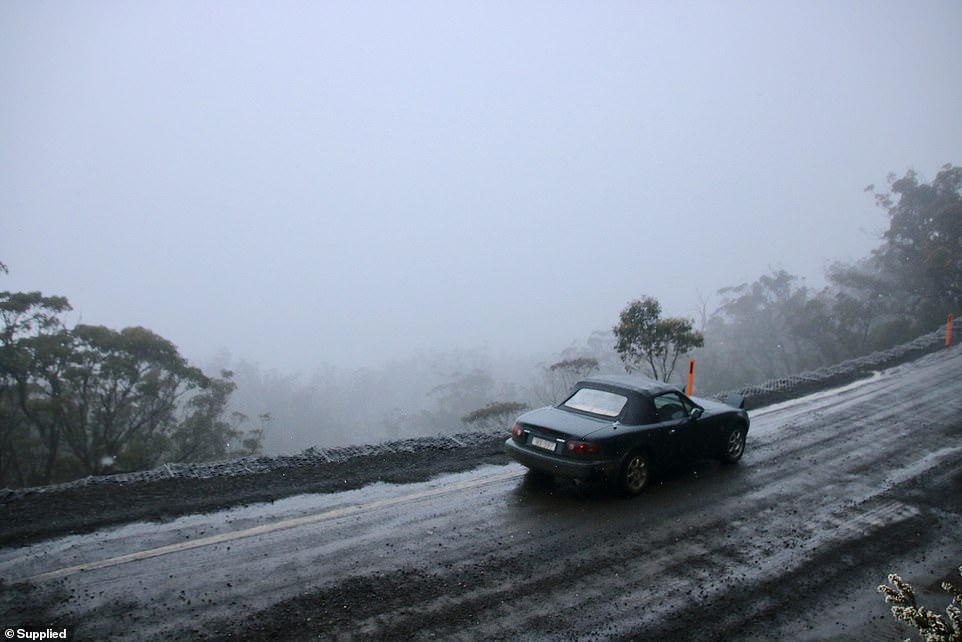 Adam said it was important people were ‘confident drivers’ with some experience driving long distance before travelling around Australia. Pictured at Ben Lomond National Park in Tasmania 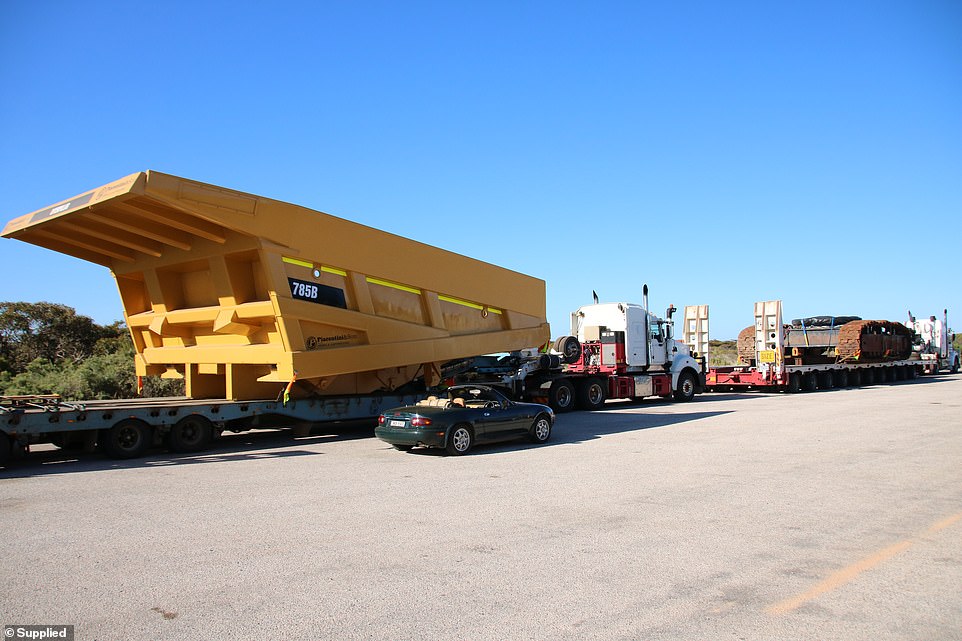 Along the way he came across huge mining vehicles that dwarfed his little roaster and often forced him off the road. Pictured on a road between Perth and Adelaide

What you need to travel around Australia

While travelling in a small convertible may seem limiting when embarking on such a long trip Adam said he travelled light and never felt like he was missing out.

‘You don’t need a big 4WD to drive around Australia,’ he said.

‘If you want to drive around Australia what you need is cruise control – I got three fines because I didn’t have it – air conditioning and somewhere you can sit comfortably all day. If your car ticks those boxes the rest of it is just kind of extra.’

Despite the limited space the 22-year-old managed to fit everything he needed, plus a few souvenirs along the way.

‘I had my tent, I had all my clothes, I had spare fuel, spare water, a spare wheel, tools, some parts and a few cameras,’ he said.

‘The only thing I was missing was a fridge or even an esky.’ 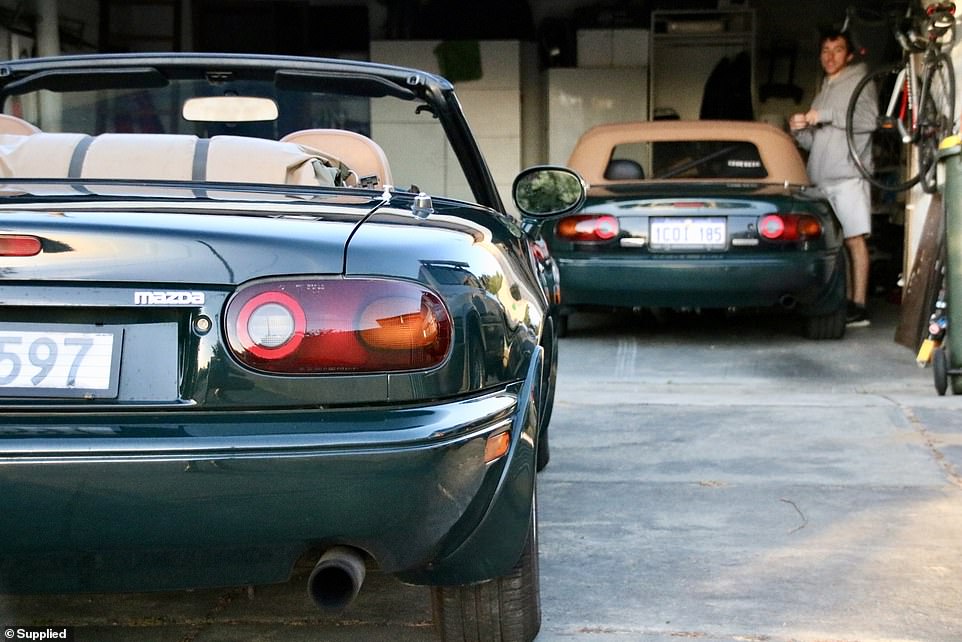 The MX-5 allowed him to enjoy the country even more with the roof down on twisty roads. Pictured at Balcatta in Perth

Adam said driving his convertible sports car allowed him to enjoy some parts of Australia that he otherwise may have missed.

‘When it came to the driving roads the MX-5 was a lot of fun, it was when the car truly came into its own,’ he said.

‘On some of the twisty roads there were people in Land Cruisers crawling along at 30-40 kilometres an hour while I blasted through in comfort.’

Even with a low ride height Adam said he never shied away from leaving the asphalt and tackled over 600 kilometres on dirt roads during the trip. 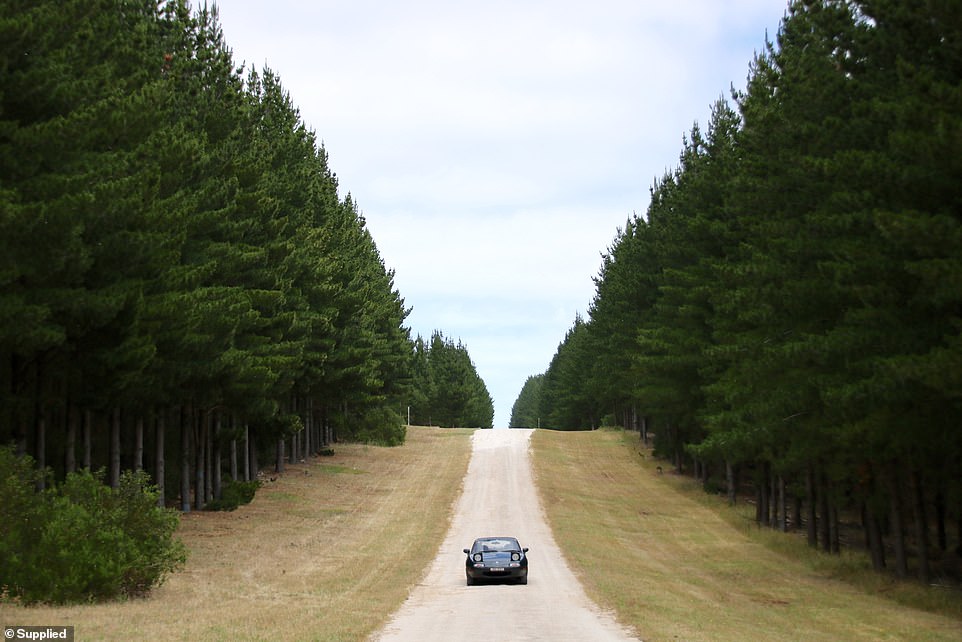 Adam said despite being small his MX5 still slowed him to cross dirt roads and have a blast during his journey. Pictured in Nelson, Victoria

He said Tasmania in particular was an oasis for a car enthusiasts that was best seen with the roof down.

With the ability to put the roof down and feel the wind running through his air in a moment’s notice you might imagine he spent much of the time in the open air but Adam said the brutality of Australia’s climate made it a rare treat.

‘The bulk of Australia is just boring roads, hot deserts and there is no advantage to keeping the roof down, it is better to keep it up and have the air-con on full blast,’ he said.

But when the sun died down in the evening or he found himself on one of the many forest-covered mountain roads tucked away in Queensland, Adam said there was nothing quote like the putting the roof down to feel and smell the road around him. 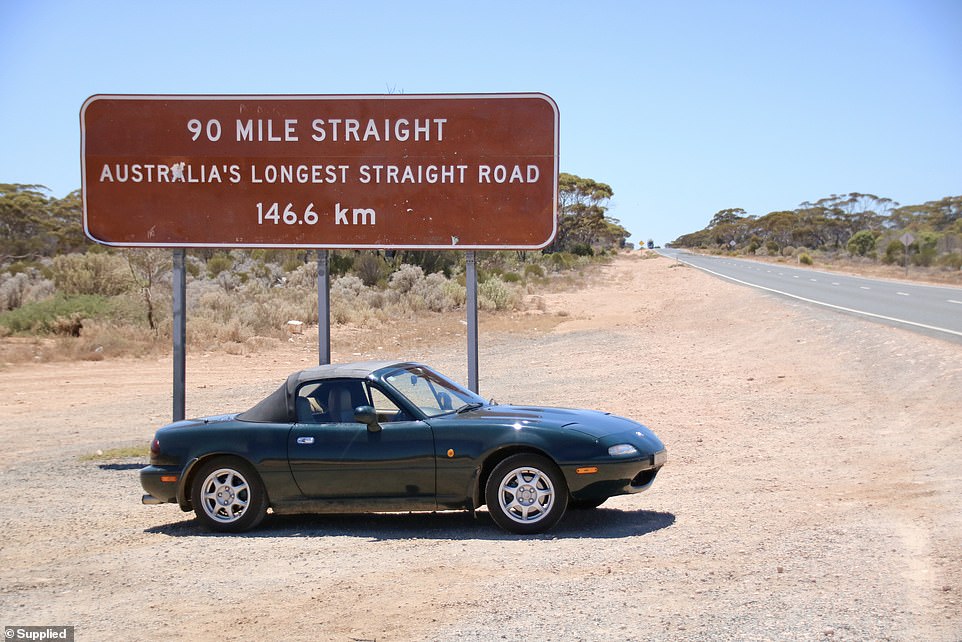 Despite some initial reliability issues he said his Mazda was reliable during some brutal stretches of Australian road. Pictured at the west end of 90 Mile Straight near Balladonia in Western Australia

The next big adventure

Despite taking over three months to complete the gruelling adventure Adam said he plans on undertaking the journey again but this time in under six days.

‘I’m in the process of planning a record attempt with me and four mates for the fastest lap around Australia,’ he said.

Unlike the infamous cannonball run attempts seen in the U.S. the attempt will be performed within the bounds of the law and dedicated to raising money for charity.

Despite the risks and cost Adam said travelling around Australian was an unforgettable experience and urged others to do the same.

‘Just do it. Stop putting it off you are not going to do it next year,’ he said. 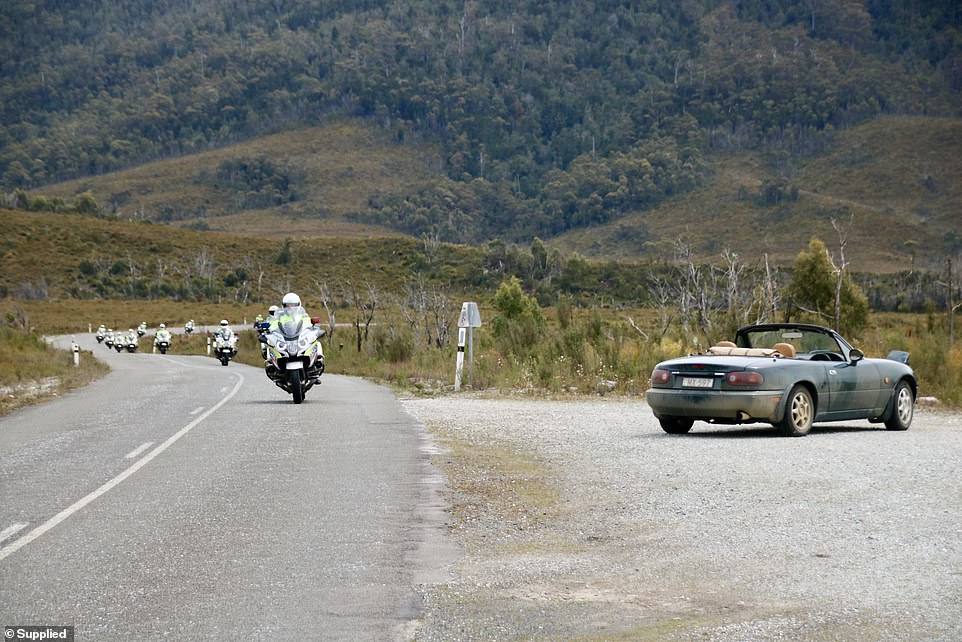 Despite taking over three months to complete the gruelling adventure Adam said he plans on undertaking the journey again but this time in under six days with four friends. Pictured at Strathgordon in Tasmania

Every state, territory and town he stopped in along the way